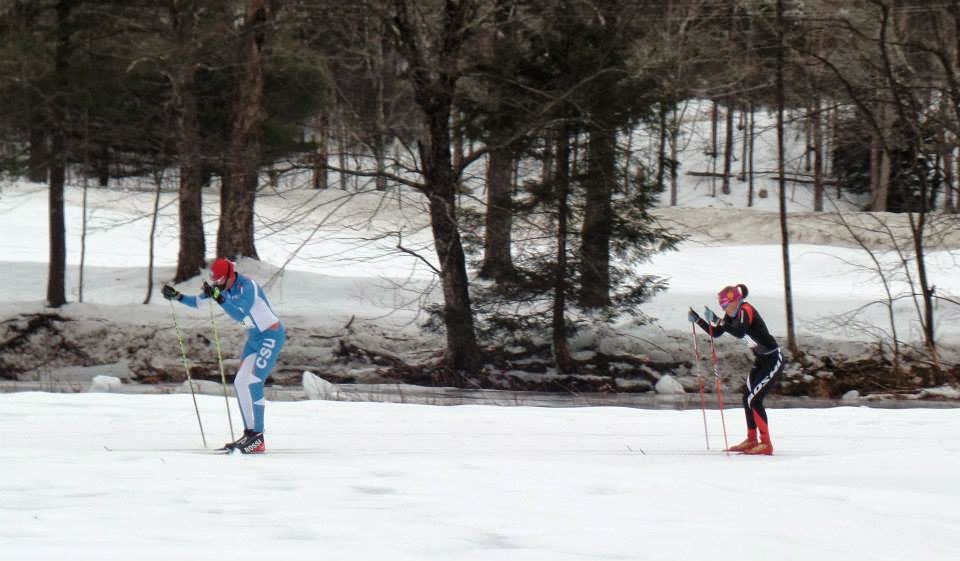 Last Saturday was the first "long" race of the season, but unfortunately, all the rain last weekend made it so they had to shorten the course, and our 30k became more like a 20k. The course was in great condition, considering the amount of rain they'd gotten, and I had excellent skis on covered klister, great kick (ok, I slipped once or twice on Yodel, but that was just me trying to find a groove), and phenomenal glide.  The women's field looked a little thin, so I made it my goal to ski with Rob.  As evidenced in the above photo, I did that for at least a little bit! 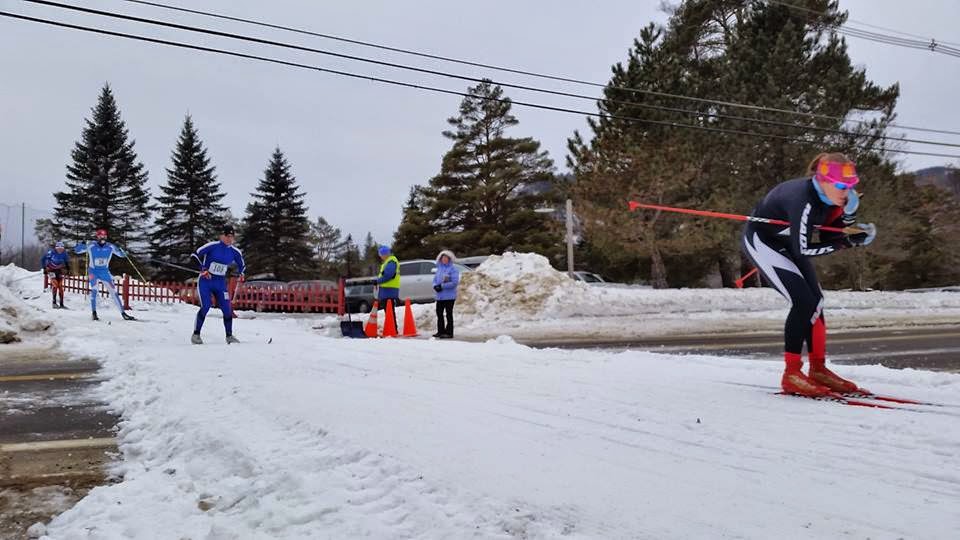 Everyone always goes way too fast around the field first lap, myself included, but I used Rob as my standard, and when he slowed down, I tried to do the same.  I knew I only had so much double-pole-power in my arms - once that was used up, game over.  I could only hope the power would last through the race.  We started climbing Yodel, and I slowed down to something more sustainable; my legs felt good but I didn't want to push into the red zone so early, and master men passed and pulled away from me slowly.  I definitely had my eyes open for any women, but so far I was still in the clear.  Once up in the upper golf course fields, I managed to double pole my way back up to Rob (boo yah, who needs summer training?), and was positioned nicely behind him as we started climbing the wave the first time. They had taken out some of the extra hills on the wave, which made it so that I could keep climbing at Rob's pace, rather than have to let him go, though I was finding that my skis would ride up on him on the flats and downhills if I did drift back.  This was ok, and I was starting to really enjoy myself.

Coming down the wave on the first lap, we caught up to Ian from Bethel, a guy I've skied a few long races with in the past, simply through virtue of being the same speed. Unfortunately, he was going a little cautiously on the last corner, and like some idiotic aggro college skier I tried to pass on the outside, before realizing I couldn't fit.  Then I slammed on the brakes, but caught an edge in the act of snowplowing/sliding the corner, and topsided pretty hard, bouncing off my head. Ouch! Luckily I was up and out of there quickly, minimal distance lost, but I was pretty pissed at myself.  Of course, it could have been worse, as I caught up to my teammate Andy out on the fields, who'd broken a pole in that same spot.  I managed to catch back up to Ian and Rob on the never-ending loops around the fields, but that burned some matches in my arms that I didn't actually have to burn. I could tell that my upper body was pretty done, but thankfully, it was time to climb back up the wave, so I could transfer more of the work to my legs again, and forget that my arms hurt so much!

Rob slowed down as we started climbing, so I took the lead, keeping my strides short and easy, not pushing the pace. Andy was leading, having gotten another pole, but he wasn't putting any great distance on us, and I wasn't worried about catching him.  Rob found a second wind near the top, and I hopped behind, with Ian a little ways back. A loose pack, but comfortable, we wound our way through the touring wave of skiers like a human slalom.  This time down, I stayed on my feet, making sure not to try and pass anyone on a tricky corner, and then all I had to do was survive the flats.

At this point, my arms reminded me that I'd emptied the oomph canister last time we did loops around this field, and it became a real struggle to hang on.  Rob took off after Andy, who was stronger than both of us double poling, and I was left dangling off the back, trying to claw my way back on the occasional uphills, but failing at it.  By the time I finally got to the Yodel to head back downhill, Ian and two other masters had caught up.  I was a little sketched out by the conditions coming down Yodel - deep sugar snow with remnants of tracks, but I trusted my skis to go in the right direction, and that was the right approach.  Then there's just the double poling around on the lower golf course til you get to the finish, and both of the masters who'd been behind me down the hill came around, with nothing left I could do about it.  I ended up 24th overall, and first lady, but in the important race of the day, Rob beat me. 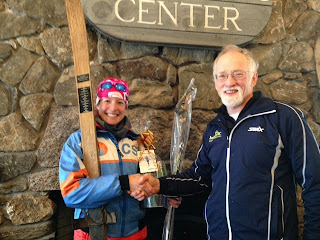 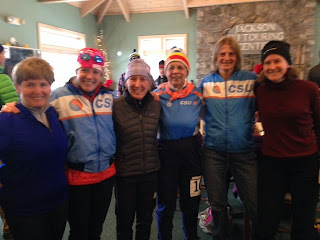 CSU won both the men's and women's one-day Club Championship award. It was a nailbiter right to the end for the women, dependent upon Sara Mae (78 yo great grandmother, and founder of CSU) to finish the race. She did, and we won! The results are based on how you do in your age class, and we have decent representation in each class, which helps.  Left to right - Jody, me, Donna, Sara Mae, Lisa, and Sarah. We're missing a few other ladies who had to leave early, but that was a pretty good showing. 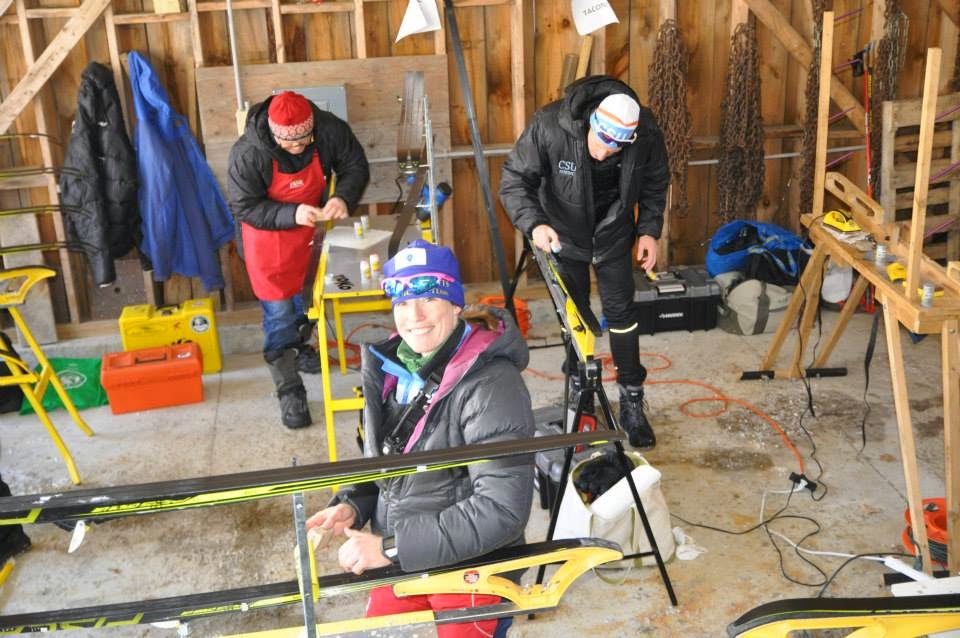 The next day found me at Notchview, coaching the MA state qualifier. We qualified nearly every CSU skier to a championship team (EHS or J2s), and as the head J2 coach this year, I'm psyched about the team.  Luckily the waxing was easy Sunday, so we could get out of our horse stall and go watch the races. 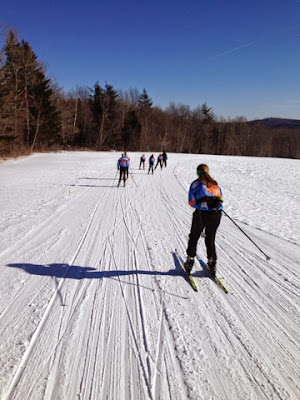 Frigid windblown fields made up half the skate course.  Lovely soft conditions, though! 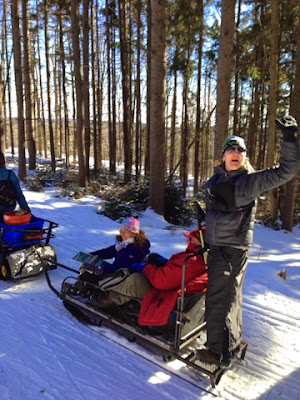 Coach Amie, recovering from knee surgery, was very excited about getting a ride on the sled =) 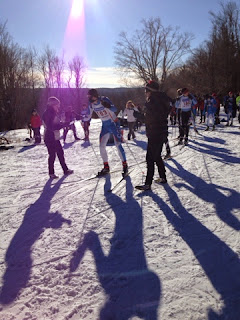 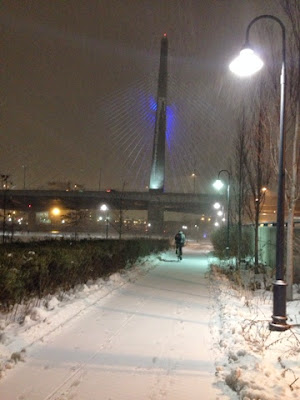 Oh, and then we got a snowstorm in Boston. Maybe you heard something about it in the news. Lovely night to ride home on a bike, actually, if you don't mind the snow. 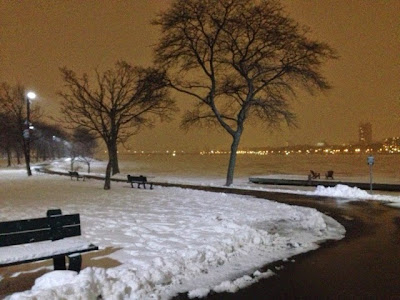 DCR even pre-salted the esplanade! 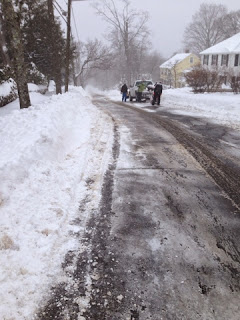 Tuesday morning I was planning to go do Tele turns down the road I use for hill repeats, but they were plowing too well. Darn!

Find information about Happy Karva Chauth 2015 , why and how it is celebrated in India.


we bring you latest collection on Happy Dussehra 2015

Send and share the best Christmas 2015 greetings Happy Christmas quotes to your loved ones and spread lots of Christmas cheer!


What's Going down i am new to this, I stumbled upon this I have discovered It positively useful and it has aided me out loads. I am hoping to contribute & aid different users like its helped me. Great job.


What's Going down i am new to this, I stumbled upon this I have discovered It positively useful and it has aided me out loads. I am hoping to contribute & aid different users like its helped me. Great job.

The most unique way to celebrate Friendship Day would be hold a gathering for your favorate images,quotes,hd wallpapers,messages,pics,photos and many more... Be that as it may, this thought needs a touch of arranging and exertion as you have to choose where to post(facebook,whatssapp,twitter,instagrame etc..) Once that is done, ring your pals and simply have your indulgence !

An extraordinary thought to praise friendship in an inventive way is make a blurb on Friendship Day this year.

friendship day photos
For some the best sort of Friendship Day festivity is maybe a heart-to-heart converse with a best friend Sharing everything that has made a difference to you and your frinds for so......