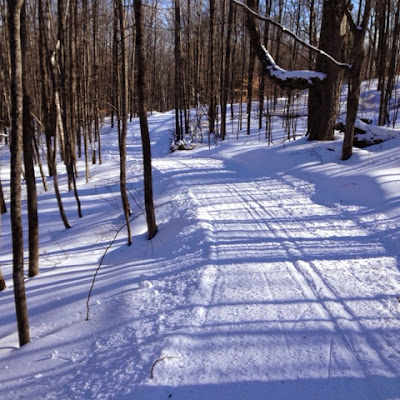 The Bogburn is a great race - old school narrow trails winding through Bob's forest in the middle of nowhere Vermont, groomed with a snowmobile, and designed to make you smile when you successfully negotiate a downhill corner. This year, there'd been some rain two weeks ago, resulting in a pretty nasty ice crust, covered with a few inches of fluff, so there was only so much he could do with a snowmobile to break it up. This meant death cookies in the tracks, very fast conditions, and a shallow track, but it was still great skiing.  He took out the first downhill s-turn, because people would probably have died, good call, but a bit of a bummer, because those are some fun downhills.

Last week was a tough one for me, focus-wise. Coming back from vacation, I wasn't doing well with the transition back to working regular hours, training in the dark, and no more afternoon naps.  There was a restlessness building inside of me, a manic energy that needed an outlet. By the time Friday rolled around, I went to the indoor track workout with CSU, and I knew I couldn't hold back, despite having a race the next morning.  I ran too fast, not feeling the work, not feeling the pain, just giving my energy a way out, through my feet and through my breath.  This took the edge off, and I was feeling much calmer, and more than a little sore, the next morning when we landed up in North Pomfret, on a gorgeous sunny day.  What is this bright thing in the sky? 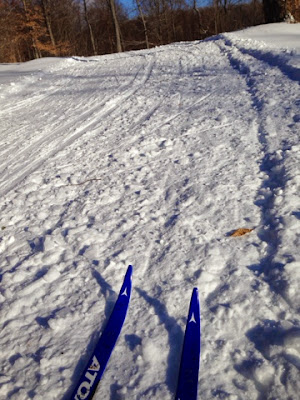 I was there early, because I carpooled with folks who had kids in the BKL race, so I strapped on my skis, and started skiing.  Because the conditions were so fast, the course took on a transition-y feel I've never noticed before - rather than long grinding striding hills there was some double poling, some skating around corners, and you had to keep thinking to stay on your feet. In other words - fun!  I kept skiing loop after loop, until it was time for the women's race. Fueled by poptarts and with extra blue under my feet, I was in a good spot. My mantra was to hang on to that feeling of loving to ski, and I think that was a good choice.

Out of the start, we had some s-turns in the field, not with any speed, and somehow I managed to catch an edge, three seconds out of the start, and crash into a snowbank. Naturally, this popped out my stupid clip poles, and so I'm crawling up a hill to get my pole (this sounds familiar), in front of everyone else who is waiting to start their race. Great. Good start, ski coach. Show 'em how it's done!

Things got a little better after that. I was more cautious than usual on the downhills, sliding some corners I normally might have stepped, but it paid off, and I stayed on the course, unlike some other people.  It felt like I didn't really get going until the long-ish striding climb in the middle of the course, and my pace never picked up much beyond 20k pace, but I was having fun.  I passed my 30-second girl, but then I skied alone for the rest of the course.  I really enjoyed zipping down those hills, and despite the death cookies, the course was soft enough that you could really get an edge into the snow to push off around corners.  By the time I hit the field with the view, I knew it was nearly over, and tried to shift gears a bit to something higher.  Just running up the herringbone hills, I wish I had splits to know how much time I made up in those final climbs - I felt good!  Tried to keep the gas on over the top, and then it was finished. I wasn't quite ready to be done that quickly, felt like I hadn't really done any work until the final hills, but I think that was just because the conditions were so fast.  Race over, I got on some warmups and just kept skiing, a little with Jess, a little on my own, until the oomph canister was good and empty. 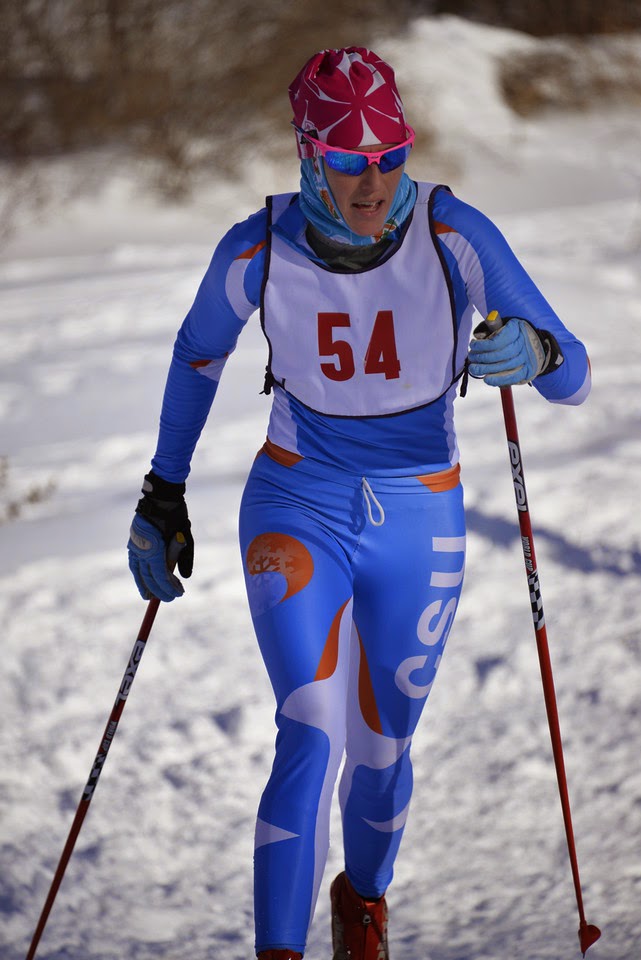 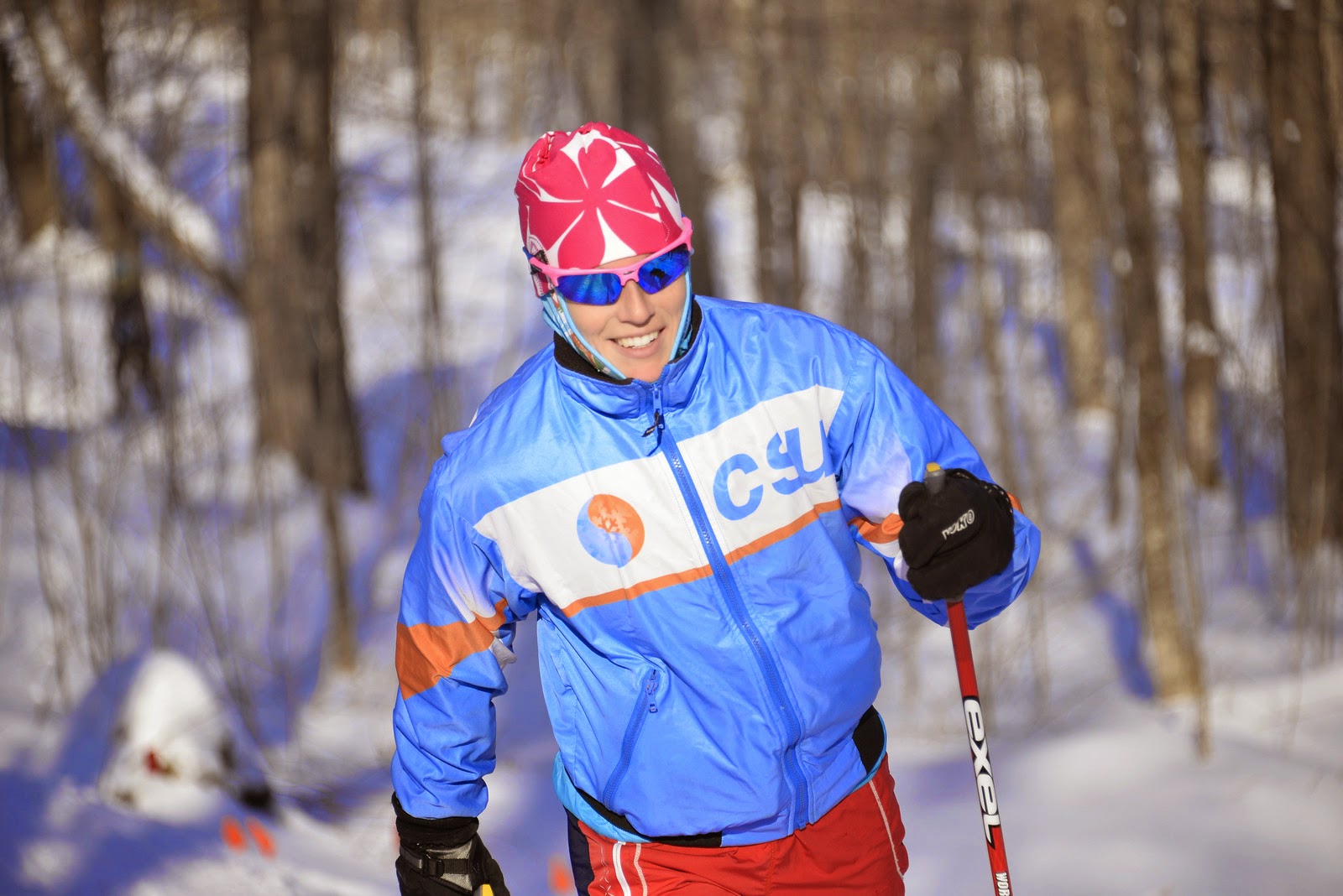 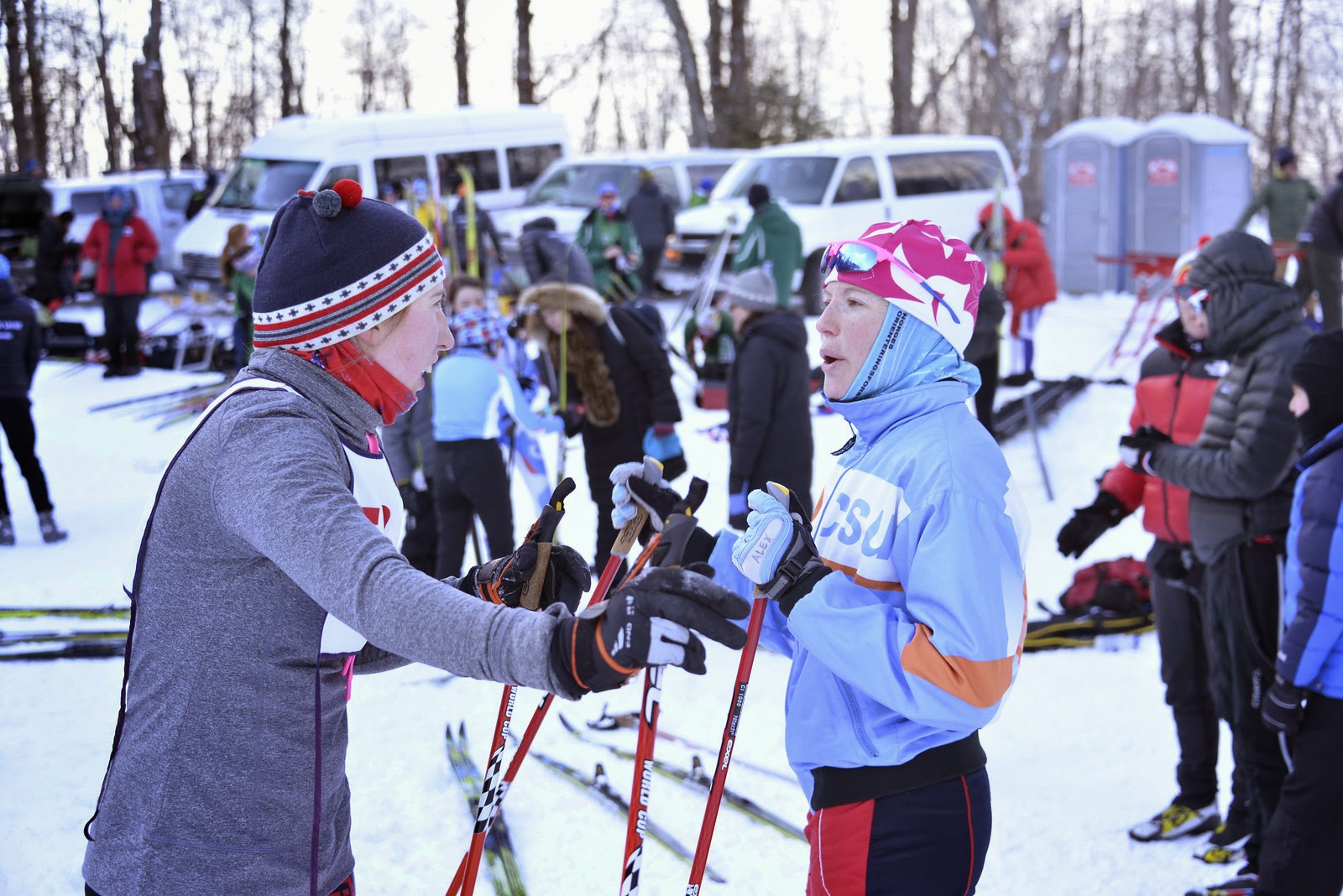 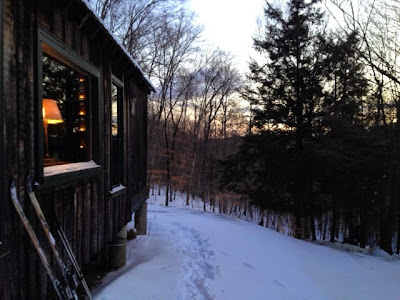 I spent Saturday night in Andy's little cabin in the woods, totally off the grid, and totally awesome.  Then on to Craftsbury in the morning for some Euro-style ski orienteering! 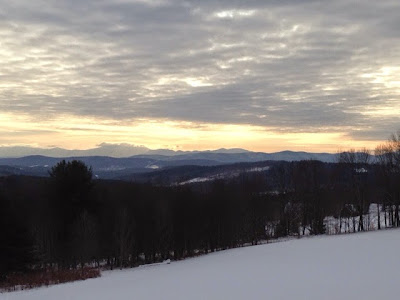 Love this view of the Whites from rte 2 heading into Danville. 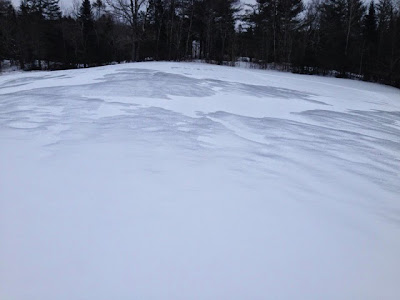 Love your writing. Thanks to you, I now have another new word -- oomph canister! xoxoxo