The Tuesday Night race series just wrapped up with the final "real" race last night. There will be a fun race before our party next week, and then I'm sure we'll keep racing until the snow runs out. So, maybe mid-June. But the points races are done, and I had my work cut out for me last night to fend off Maddy from taking the overall win.  If I'd properly studied the points ahead of time I might have discovered that I still could have won with a 2nd place last night, but I didn't know that at the time, so we were fighting tooth and nail. Usually my approach is to just win from the front, but I had pretty low energy and low motivation, so ended up in a game of cat and mouse with a pack of skiers.  The conditions were a little rough around the edges, with 25mph wind and blowing snow, but luckily we're used to winter at this point. The wind meant that drafting would definitely play a role, tonight, so my plan going in was to do the least amount of work possible, and then win the sprint. Just like Northug.

We started out slower this week, but Terry and Greg skied away from me on the flats - they're my usual group this year, but I couldn't summon enough give-a-damns to put out the effort required to keep up. I figured I'd fade back to the next pack, but unfortunately the next person to go by was Maddy, and she was chasing Terry and Greg. This presented a dilemma, but thankfully Morgan solved it by coming around and chasing down Maddy, and I was able to hang in his draft. The blowing snow made it really hard to see where people were planting their poles, and for whatever reason I was having a lot of trouble matching my rhythm to that of the bigger guys. I'll blame my slow skis - they were still waxed for the week before, when it was 25 degrees colder.  Thankfully things slowed down a bit coming off the flats, and Mark jumped into the lead to attack the hills on the zigzags, pulling us back up to Maddy by the top of the second hill. Ok, race back on. I was not-so-secretly very glad that she hadn't been able to close the gap up to Terry and Greg.

Into the second lap, Mark kept pulling, and I was starting to warm up enough to feel like this was quite sustainable, for a race. I made an investigatory attack on the hills, and determined that the third hill was definitely where this fight was going down next lap. Then I faded backward, ceding the lead to Bob, biding my time. Maddy threw in a small attack on the flats, but Mark covered, and coming back into the hills, she tried again. Mark covered again, and I moved in closer behind Maddy, since the worst thing that could happen now would be to let one of the guys between us and then have to pass two people in the finish.  She attacked again on the second hill, but I was able to cover, saving energy. I could hear her breathing, which was a good sign, since my legs had finally woken up - these high volume weeks it takes me a while to really tap into my high-end aerobic capacity, but it's there, and I was finally ready.  So when Maddy attacked again on the last hill, this was it. Mark was covering, pulling even on the left, and I was boxed out behind, nowhere to go. Luckily, I read it correctly that Mark was moving up as Maddy was fading, and I jumped in behind Mark, just as the hill started to crest. A good short sprint and I was clear of the pack, and I knew I had to keep the gas on now, because if they got too close they'd be able to slingshot around on the downhill. The slow snow helped, and I finished still clear of the pack, and most importantly, ahead of Maddy. 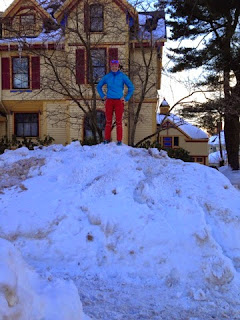 Our snow pile has been growing. Currently taller than I am. I say "snow pile" like there's just one.. ha! 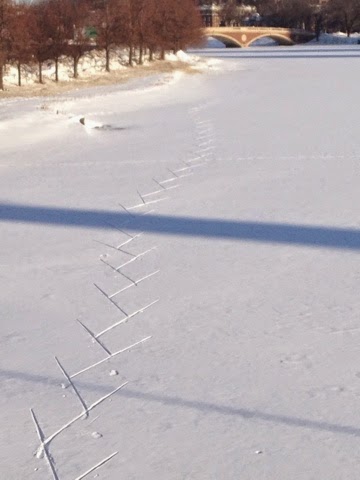 The skiing on the Charles River has been fantastic. The photo above is taken from Western Ave bridge on my run-commute; those are Ed's tracks from the night before. Once-in-a-lifetime conditions, not just for ice thickness, but also for skiability of the wind crust. Wonderful skating! 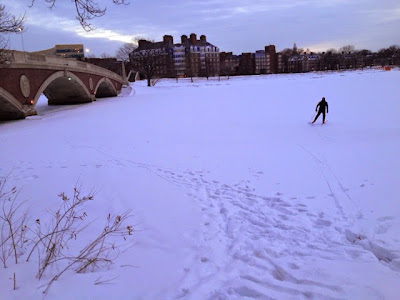 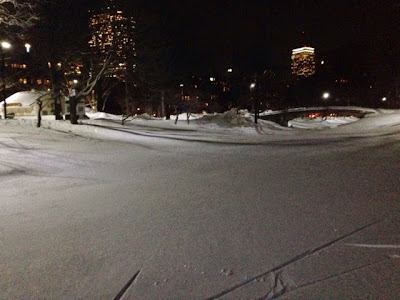