Last weekend I was the head coach for the Massachusetts Team at the J2 Championships. This is a race for kids in the under-16 age group, that they have to qualify for. Each state can bring up to 22 boys and 22 girls, and while traditionally the New England states are the participants (Maine, New Hampshire, Vermont, and Mass), the past couple years we've also had New York, "Midwest" (WI and MN), and occasional overseas visitors.  This competition is an important one in developing the pipeline of successful young ski racers, and I think it's one of the best things out there in terms of getting a kid to fall in love with the sport.

This year, the champs were up in Fort Kent, Maine. That's about as far north as you can go before you hit eastern Canada, so we rented a coach bus, and all piled aboard.  I'm pretty sure that hanging out on the bus is what cements those kids' friendships for life, and there was a lot of positive energy for our long drive.  My coaching staff was pretty awesome, and I felt like we worked really well as a team, keeping everything organized and taking good care of the athletes' needs.  For many, this was the first big trip away from home, and as it also was a season wrap-up, there were some nerves.  That's sort of the gist of racing - the idea is to beat people, all of them if you can. 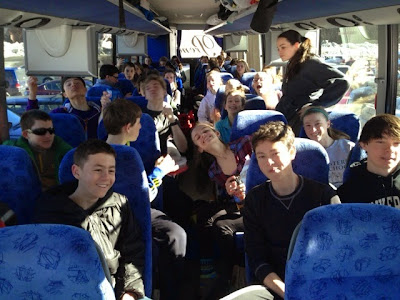 Smiling young faces. The team hailed from all over Massachusetts, with the largest contingents coming from Mt. Greylock and CSU.  We also managed to qualify every CSU skier to either the J2 Champs or the Eastern Highschool Champs trip (EHS is this weekend), so that's pretty darn awesome. 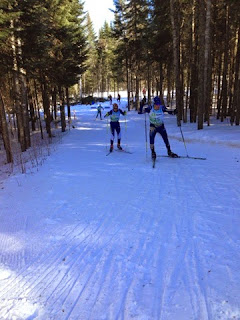 The one photo of racing that I took - my skier James coming up a hill in wave 2. The race is started in waves, one skier from each state in each wave, so you always have a group of 4 or 5 to race with. You still have to have the fastest time to win the race, but your position relative to the rest of your wave gives you an idea of how you're doing, and also makes things more interesting as you race. 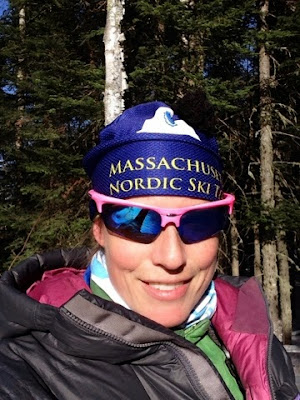 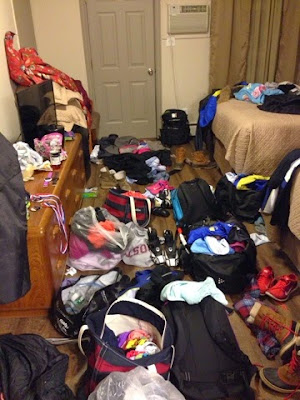 I didn't realize rooms could GET this messy. Put four J2 girls in a room and that's what you get, I guess... 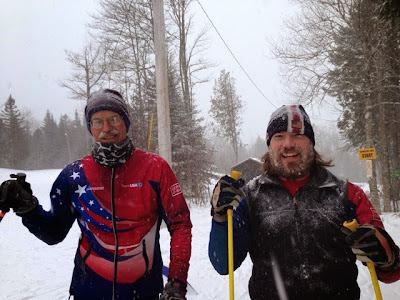 Ed and Ken chose this weekend to come up north and scout out ski orienteering venues. They've settled on Presque Isle (much closer to civilization), but came to visit Fort Kent on relay day. 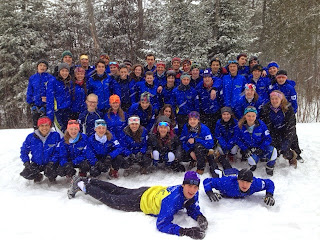 Team Mass! If you want to read more about the races, you can check out the CSU blog.

Leaving the County, it was snowing, a decent amount. Our bus wasn't quite equipped to deal with those conditions, and it repeatedly got stuck, ultimately taking four hours to get to Presque Isle (still in the County).  At that point we got stuck in a mall parking lot, and spent a few hours entertaining ourselves (or, in the coaches' case, frantically trying to figure out what our options were and what to do), before the snow thankfully stopped and the plows got out to clear the roads.  We got back on the road and had a verrrry slow trip back to Massachusetts, reaching Boxboro at 4:15am. I managed to get work done on my computer until about midnight, then watched the road slide by, unable to sleep, and I rolled in the door at 5:30, tried and failed to take a half hour nap, and figured I may as well just head to work. It's been years since my last all-nighter, and I'm definitely too old for this shit now.  Three days later I'm starting to feel normal again.

But the trip was well worth the travel, and I was super proud of all my skiers, CSU and non-CSU alike. It's always fun to get to know a new team, and I was really impressed with all of them for their professional attitude toward the racing. Not a given with a group this age.

Now on to the next three weeks of crazy...

Yeah all nighters are … not good. I haven't pulled one in a few years. And I don't wish to any time soon. Luckily when you do have one, you're usually doing something epic. Like shepherding J2s in a mall in the county.

How did Ed and Ken feel about the ski-o opportunities up there? I've never been to the County (for reals), will they give me an opportunity to make the trip?