The Billygoat is a really awesome orienteering race, with a fair amount of history.  I've won it the last two years, at Baldwin Hill and Earl's Trails, and I was looking to repeat the title at Egypt Mills, in the Delaware Water Gap.  This was my ninth Billygoat over the years, and it remains one of my favorite orienteering races. Little touches like the traveling doorstop prize, the control codes initialed with your place from last year, the mass start aspect and the ability to skip a control - all these things combined with the generally camaraderie of the sport combine to make it a special race. 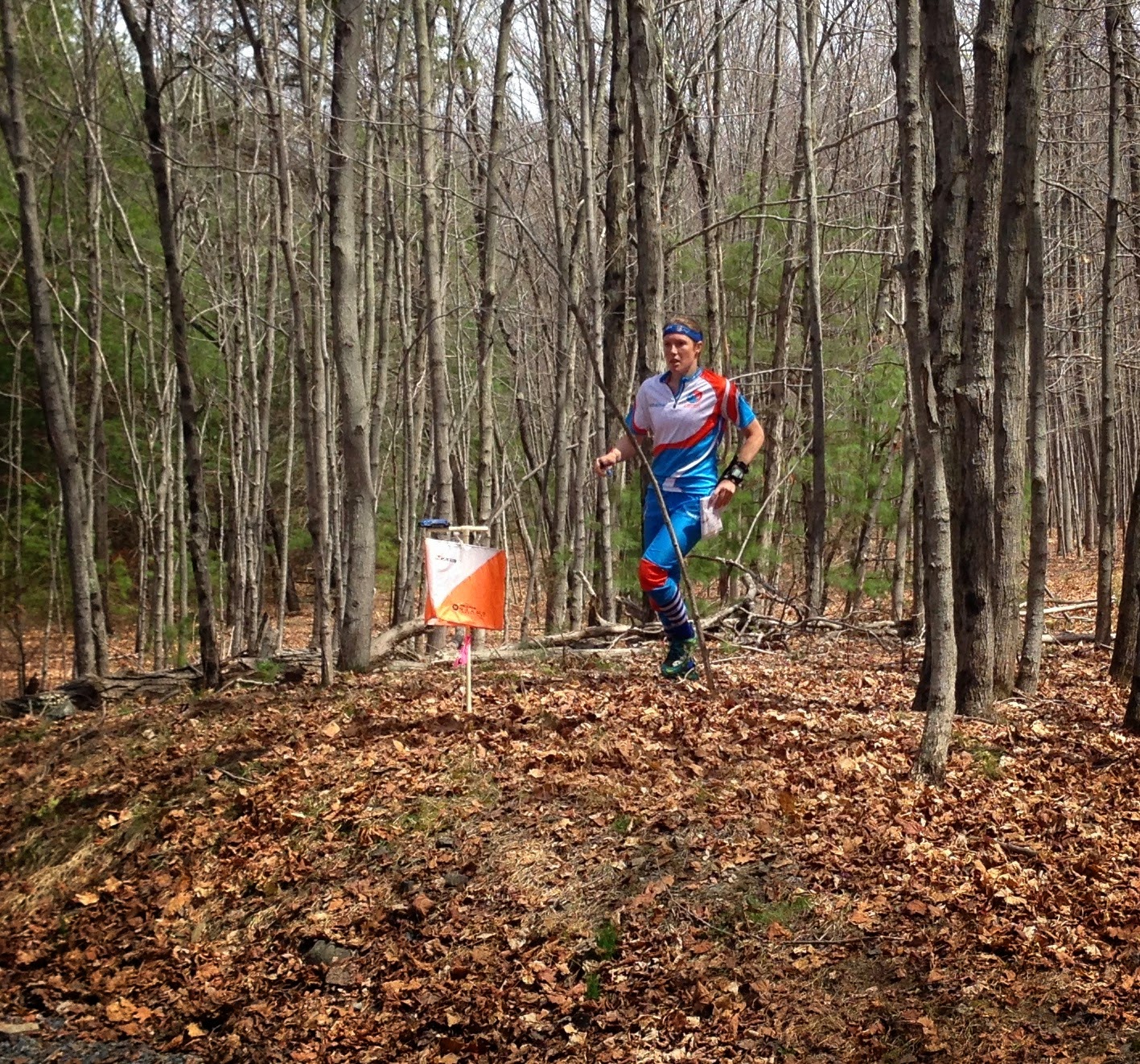 It's always tempting to take long races like a fast-paced training run, but I'm racing the long distance at Worlds this year, which means pushing the pace I can go for a long race. The Billygoat is likely a smidge longer and hillier than the Scottish Long Final is going to be, but it would still be good practice to take it out with some intensity.  Heading to the first two controls I was just behind the lead pack of guys, which always looks larger than it ends up being because of a heavy influx of West Point cadets, who are traditionally much stronger runners than navigators, and tend to get lost later in the race. Hannah Culberg, one of my US Teammates, was just behind me at 2, so my hope was to catch a faster ride from the guys and she wouldn't also hop the train. Unfortunately, I then made the wrong decision on the "forked" control - you could go to either third control, as shown on the map - and I chose the control that added a bunch of climb and a bunch of unmapped raspberry bushes. Ouch!

The bad #3 combined with a poor execution of my route to 4 set me back 2-3 minutes from Hannah and the pack of men I wanted to be running with.  I knew that things hadn't gone swimmingly, and set out chasing, hard.  There were some lovely open stretches of forest in the area from controls 5-10, and I took advantage of the lack of undergrowth to stretch my legs out and claw back some time.  By the aid station at 13, I got a split that I was about a minute behind, which was helpful information. I was still feeling good, energetic and springy, so I figured I'd better use this energy while I had it, and upped the pace. Around here you can see in the splits where I start pulling back some time from the men, too. Pays to be fit.

I caught sight of Hannah as she was leaving 14, which was a relief. I figured that she hadn't skipped a control yet (you can skip one, and only one, control at the Billygoat), but I could probably fall in behind her for a bit and catch my breath before attacking again.  My plan was to skip #18, though in retrospect 22 would have been a much better skip.  Anyway, I made contact along the way to 16, and quickly discovered that I really had just been moving faster. We didn't exchange many words, just sort of offered each other support, but both of us had fallen into the pace we were using for the race, and I took the lead and opened a gap. I was on my own again after skipping 18, since she was clearly saving her skip for a later control.

Knowing that she was skipping later kept the pressure on.  I had to keep running like she was ahead of me, even as my legs started to notice the fatigue of the last hour and a half of hard running through terrain.  It was a struggle to keep moving up the hill through thick brush to 22, but I knew even in a long race, things can come down to seconds.  It turns out that Hannah did skip 22, and if she hadn't bungled the approach to 23, we likely would have been neck and neck at the finish.  That would have made things considerably more painful, but as it was, I was in the clear for the run-in, and in the lead.  Yay! 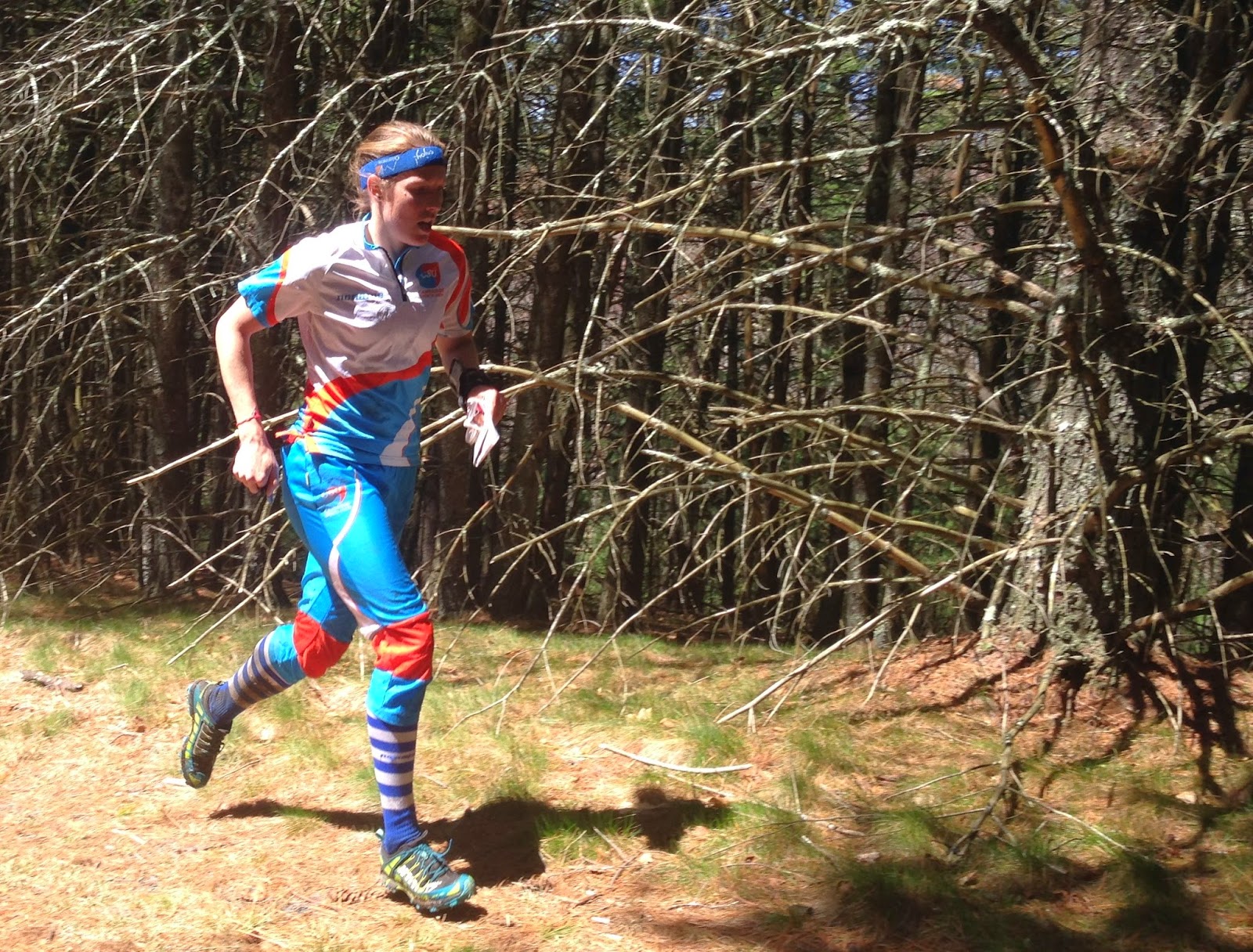 Thanks to Kseniya for the above photos. I was pretty tired by the end, but it felt like a really successful race, and I was psyched with the confidence with which I was attacking controls. My legs felt great, which is a nice change. And now I get to keep that ugly doorstop for one more year! 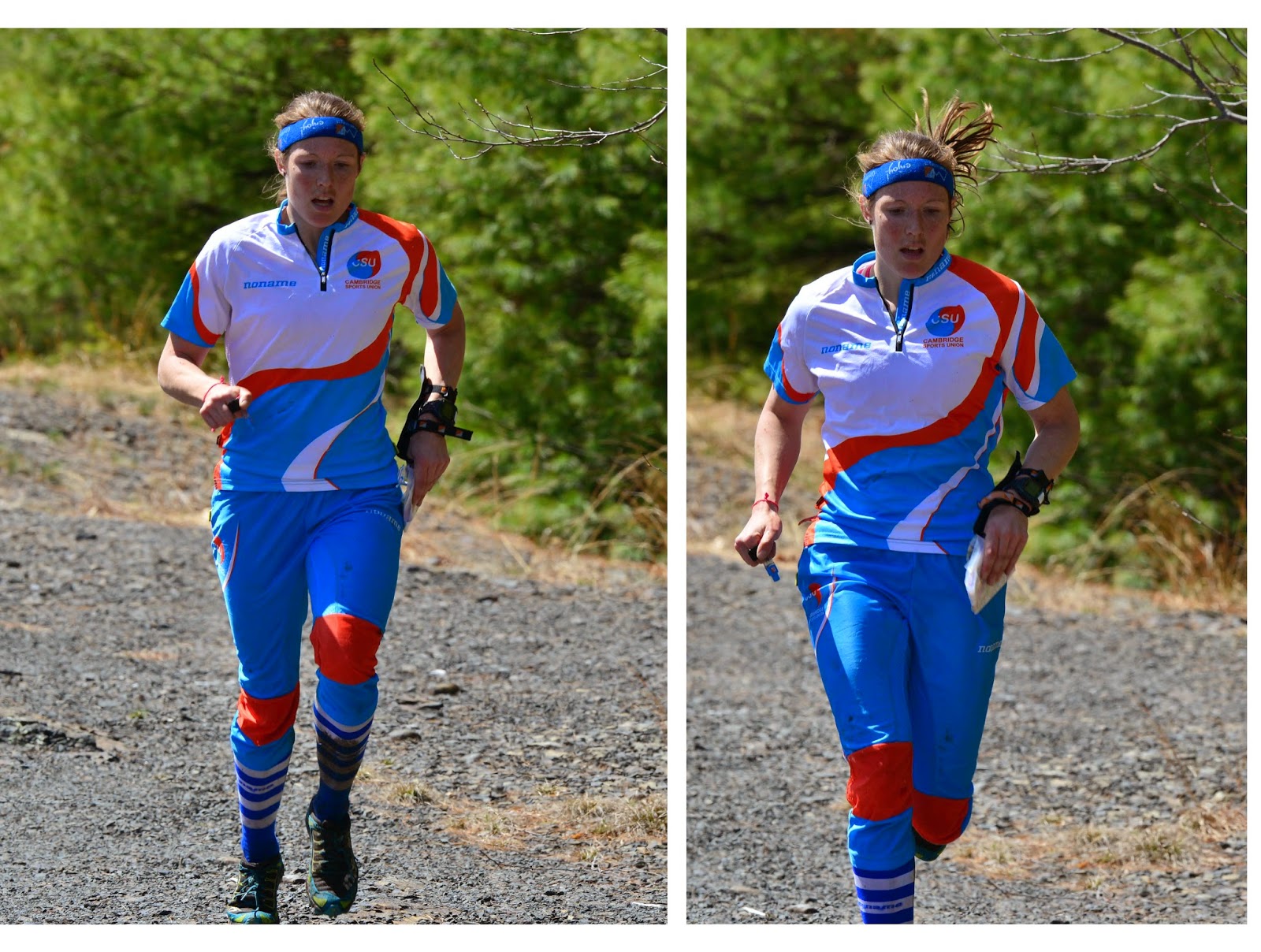 Thanks to Clem for these photos.