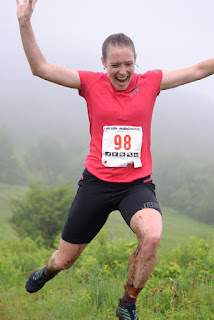 Last weekend, I took some junior skiers out west, to do some rollerskiing with their buddies on the Mt. Greylock team, and then to do the Mt. Greylock mountain race. It's a tough race for a teenager, but I think it's good for the kids to challenge themselves occasionally, and this was indeed a challenge. I did this one last year, and it was a pretty great test of who is the best all-around mountain runner. Sustained climbs, runnable downhills, a smattering of rocks and mud; it's a great course, even if I prefer the courses with less runnability. I think it's great to do races that don't only suit your strengths, but sometimes that can be depressing. My main goal for the day was to beat last year's time; it was supposed to rain a lot, but last year was pretty wet up top, too, so I figured conditions would be similar.  It was 20 degrees warmer this year, which was too bad, but I never felt like the heat was a true limiting factor. My secondary goal was to make sure none of my girls beat me.

We started out, up the hill, and my focus was on keeping my effort semi-comfortable. I remembered having very sore glutes and hamstrings last year, and though I hadn't gone quite as hard this year at the Friday core strength session with my juniors, I was still a little achy from my plyometrics I'd done earlier in the week. Damn. I found it was definitely easier to keep running, well, jogging, than to hike, because hiking took much more strength. One way to keep from hiking too much was to make sure I sped up any time I was hiking, and that made it enough of an extra effort that I couldn't wait to switch back to running, to recover!

I stayed closer to Debbie this year up the hill, and the effort felt less cumbersome than last year, so I was patting myself on the back for a job well done, until I saw the split at the top, two minutes slower. Oh. It was a little depressing, but I told myself that whatever happens, I still need to do a long run with a lot of hills today, and this race fit that bill.  My motivation was low, but the first rocky descent was fun enough to put a real smile on my face. The X-Talons were great, even in the rain, and I pulled back a lot of places, though no women.

On the few uphills after that descent I discovered I'd really only brought my descending legs today. Oh, well, run what you brung. I caught a glimpse of Debbie's back as I got to the second feed station, so pushed the pace a bit on the piece of singletrack before Jones Nose, and just like last year, caught up to Debbie right about there.  We zipped down the hills, which is just lovely and runnable and fun, and Ben was at the bottom taking photos, I couldn't help it, and leapt into the air giggling. Another one of those photos that I just had to buy - thanks Ben! 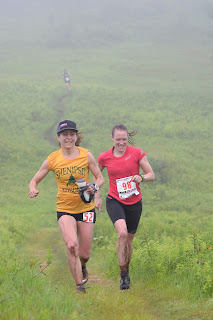 Then began the un-fun part, just a slog up a fire road with loose rock underfoot and tons of water on the trail, and I was very thankful to be sharing those miles with Debbie, chatting about anything. I wasn't having much fun, but the miles went by relatively quickly, and soon we were careening down the hill, much to the chagrin of my sore hamstrings. Having a buddy had put a small bandaid on my broken give-a-damn, but I couldn't bring myself to push hard, and deliberately stopped for water with a mile to go, because I just didn't want to have to sprint to the finish. I only ended up about 15 seconds back, but the rope tow was broken, and I had no energy to repair it. I lost about 4 minutes to last year on that final section of fire road, so didn't beat my time. Second year in a row for 4th place, so maybe NEXT year I'll show up rested!