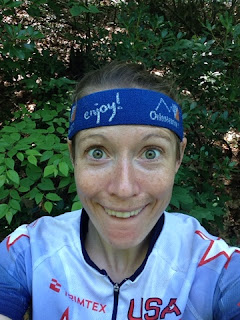 With just two weeks left before my departure for the World Champs, I figured I had time to squeeze in one final training weekend. Ed was off working, so I jumped into my car and managed to beat most of the Friday night rush hour traffic to land at Earl's Trails, in western MA, by 6pm. This was enough time for a relaxed shake-out run through a course from 2012, that Phil had streamered for me earlier in the day. Given how little forest orienteering I've been doing in the last month, this was a bit of a skills refresher, before the heavier work on Saturday. I was pretty psyched to get into the forest. Some wobbles, but overall a very positive outing, followed by a wonderful dinner with Phil, Margi, Peter, and Gail. I miss my days in the Valley.

Saturday had two pretty intense sessions on tap, designed by coach Boris - first up were some orienteering intervals, and the afternoon was a downhill course, designed so that you hit higher running speeds, and thus push the navigational limits rather than the physical ones.

The morning intervals went pretty well, but with temperatures in the mid 80s and a dew point to match, it wasn't easy going. The mosquitoes were out feeding as well, adding a sense of urgency to any sort of uphill where my speed dropped. Super duper thanks to Peter, for going out and hanging streamers for the interval, and to Phil for the streamers on the course.

Sunday, the plan was for a long run, and I figured what better way to get in a long run than with a bunch of crazy other friends on a trail wearing a number? Rather spur-of-the-moment, I signed up for the Bear Brook half marathon. They were offering a full marathon as well, but I felt like that was a bit much for a simple Sunday long run. Of course, I didn't check the start time before signing up, and turns out the start time was a glorious 6am. Oops. With a 2 hour drive ahead of me from western MA, I decided the better plan would be spend the night in southern NH with Kathy, so I packed up after dinner and moved houses. I woke up twice to anxiety dreams about missing the start, but luckily it all worked out, and I had plenty of time.

This race cost about three times what the usual barebones Grand Tree races cost, and while I'm totally cool with that (I happily paid the full entry, after all), it attracted a different crowd. Many more women, and probably 80% of people were wearing bright neon colors, with tons of women in running skirts. Strange. I wasn't sure who was who, since I haven't done any of the NH trail race series, but I figured the course map looked pretty flat, so my plan was to stay pretty cruise-y in terms of pace. Hopefully that would be enough to win.

The marathon took off, and shortly thereafter the half marathoners followed suit. The two races were on nearly completely different trails, so we didn't have the problem of lapping slower runners - a really nice touch. The course started with a series of short climbs on singletrack, and I quickly discovered that my calves were pretty unhappy about the double orienteering intensity session yesterday. Two women were ahead of me, but I knew from experience I'd just have to go at a pace where my calves could recover, and hope for a full recovery once they were properly loosened. On the extended downhill back to the river I reeled in one of the women, so I figured that was good. I actually got a bit ahead of her, because the downhills weren't done yet, and then I really started to enjoy the course.
The trail wound through pine forest, mostly flat, really beautiful. Eventually it climbed up into a recently-logged area that was filled, and I mean FILLED, with blueberries. Ripe blueberries. Plump blueberries. Such delicious-looking blueberries. I wanted to stop. Just for a little while... just one handful? Somehow I made it through that section without a blueberry break, and I still don't know where that willpower came from!

Maura, the lady I'd passed on the downhill, caught up to me at the aid station, and we ran together for a bit. The trail was still flat enough that it wasn't hard to keep cruising, despite the fatigue in my legs, and my mentality shifted a bit from attack to defensive. I let that woman in first leave my thoughts, and started considering how to win the fight for second. It's not the most aggressive mindset, and it doesn't lead to winning races, but sometimes it's what you've got. I ran through the final aid station, not needing anything, and Maura stopped, and when she didn't catch me on the final climbs I knew I had it in the bag. Took it slightly more cautiously on the downhill to the finish, and then I was across, safely in second. 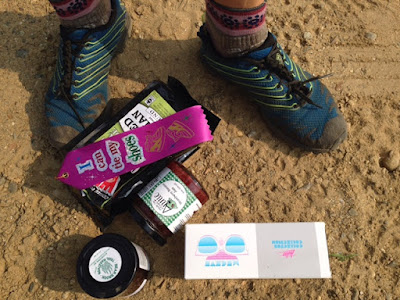 Of course I wish I'd won, after the fact, but that wasn't happening today. I still won a huge pile of schwag for 2nd place - coffee, home made jam, sunglasses, and, most importantly - a ribbon proclaiming that I can tie my shoes! Given my daisy-chain approach to tying my Inov-8s, I felt like that was appropriate. 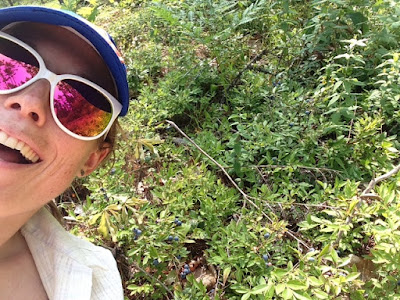 After a quick dip in the lake, a cheeseburger, and a lot of cold water, I was ready to go home, but first, I had some business to finish - that blueberry patch needed a visit off the clock! 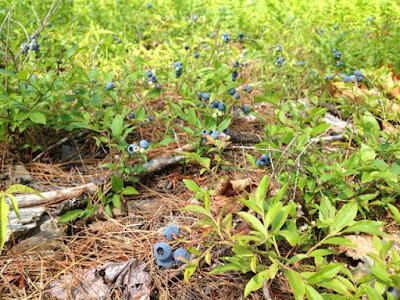