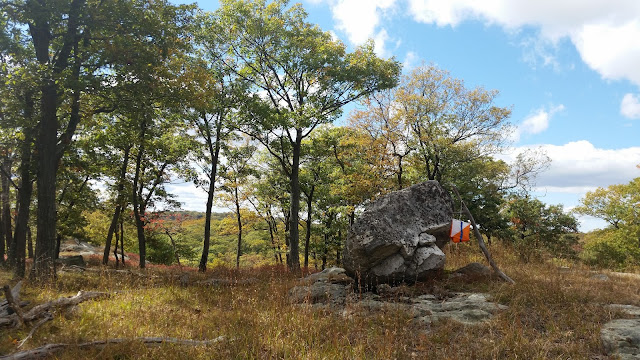 The Hudson Highlander is a fantastic race. 26.2km of orienteering, in a beautiful park with fantastic terrain that still feels like wilderness, on a beautiful day. Harriman state park is rugged, raw, physical, and utterly gorgeous. I love it. I think Harriman was where I first really got bitten with the competitive orienteering bug, back in 2009 when I was invited to join a US Team camp, and Thierry Gueorgieu and some of his French Team buddies were along for the vacation. I watched them float through the forest, and I wanted to be able to do that, too.

A kilometer in the forest has about the same metabolic costs as a mile on the trail, so for a 26km orienteering race, you're pretty much facing a trail marathon. Cool, that sounds like fun on completely inadequate training, let's do it! The race is a mass start, which means it will become immediately apparent how much you have or haven't been training, and there are some special segments - a trail run, where you just follow streamers, and a King of the Mountain leg, which, surprisingly, goes to the top of a mountain. These primes get special prizes, and even though the women's field wasn't super deep this year, with one of my competitors setting the course and another walking the Lowlander with a broken wrist, I wanted to win those primes as much as I wanted the overall! And of course, I wouldn't mind taking some scalps from the men's side. Too competitive for my own good, they say... 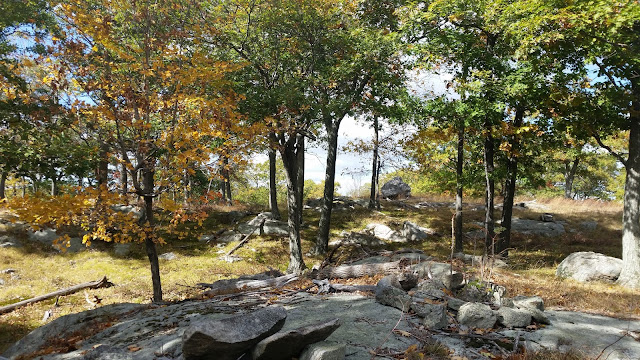 I knew I didn't have any extra matches to burn, so the name of the game today was energy efficiency. No thrashing about trying to brute force it, because I'm just not strong enough for that right now. But this sort of distance with this low control density meant I got lots of the part I love best in orienteering - running through the woods!

King of the Mountain turned out to be the first leg. Oof! This meant I only had to go fast enough to stay ahead of the other women, so I tried to keep the effort under wraps, and managed to get to the top first, but well behind a bunch of the men I'd like to beat. My legs were already exploding, not a good sign. This led to a very slow execution to #2, with lots and lots of walking. By then, I'd fallen into a group with two guys I've run with before, and we were loosely together until I dropped them by taking a better route to 5.

At #5, I picked up two West Point cadets, who were standing around looking a little lost. The Highlander is in the backyard for these guys, so there's always a good turnout, but they're definitely stronger physically than navigationally, so tend to do a bunch of following. That's ok, I was planning to take it easy for the remainder of this first loop of orienteering, and then dump all my energy on the trail run, which looked to be awesome technical singletrack along the Appalachian Trail. I led the cadets smoothly through controls 6-7-8-9, and then it was time for the trail run!

I like to hunt when I race, and it was a good day of hunting, as I swallowed up runner after runner, stretching out on the runnable parts and tumbling down the steep and rocky descents. Unfortunately I could tell that my already-sore butt and hamstrings were going to pay for this turn of speed, possibly dearly. What matches I'd had, I burned on the run. Worth it.

I finished up the trail run in good spirits, now in 16th place overall, but fully aware of how much energy I'd just used. Two guys I'd run past caught up to me after we left the water stop, and I was doing much more walking than on the previous map. Maybe I should call it slogging. Rockhouse Mountain has a lot of very high blueberry bushes, mid-thigh on me, and this stuff is quite physical to move through. Occasionally I'd get lucky and find a game trail that went roughly in the right direction, but mostly it was just pushing through the blueberry, hoping that my foot wouldn't catch on anything and cause a full-on hamstring cramp. 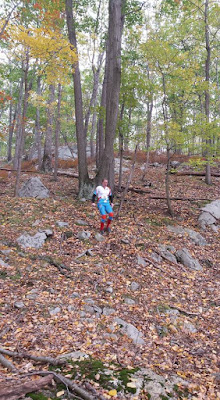 On the way to 16 there were a few kilometers on a trail, and I discovered I could still run pretty good if I didn't have to pick up my feet, so I dropped Kevin and the cadet. Then it started to snow, which was pretty cool, and upped my spirits enough that I could add some oopmh to my step coming into the final map exchange, where I caught a college kid who should be faster than that, and crammed some cookies in my mouth, hoping to hold off the hamstring cramps for the last 5-6km loop.

Lots of trail running on this map, though even that was getting pretty difficult. I really enjoyed the little loop at the southern end of that map, lovely forest and I was still navigating very nicely. I managed to pass two more cadets on this loop without them seeing me, and I managed to up the pace to hold my place to the finish. Not my fastest Highlander ever, but it was a really enjoyable race, and I was psyched to end up 11th overall. Turns out you can mostly replace training with toughness, who knew?

Super duper thanks to HVO for setting up such a nice race. The course was great, and I appreciated all the work that goes into setting up a long adventure-style race like this. 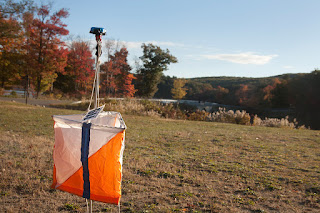 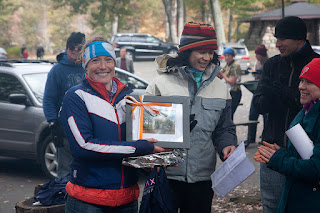 Award for KOM leg was a photo from that control. Fitting prize, considering I didn't spend as much time admiring the view as I may have liked.