Patrick, one of the thinkers/acters/doers in the orienteering community out in Seattle, was hosting a race tournament made up of elimination heats of orienteering sprints. This sounded awesome, so I signed up. Unfortunately, I have since been nursing an overuse injury that just won't go away, so I found myself facing six races over two days from less than 10 miles a week of training. What could possibly go wrong?

The format was elimination heats: everyone started with a time trial, to rank the entire field of 80 runners. Then we were divided into 16 heats of 5, and the top two from each heat moved up, the bottom two moved down, and the middle runner from each heat battled the middle running from the neighboring heat, with the winner moving up and loser moving down. So, you end up with a constantly moving bracket of runners, and ultimately get a single winner. No allowances were made for oldness or femaleness, everyone was in a single race. Of course, this meant that there were many unofficial sub-races going on all weekend!

The time trial went well, and I landed in 19th place. I was not feeling particularly fit or fast, but didn't feel like the first effort had taken too much out of my legs. A good start! We had about two hours before the next race, in a wooded park maybe 10 minutes away from the first spot. In this one, I was ranked #2 in my heat, behind Ali. I took the race at a very controlled pace, since all I had to do was finish in second, and this proved to be well within my ability. 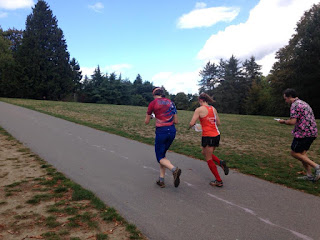 Team Giggles heading out for heat #2. 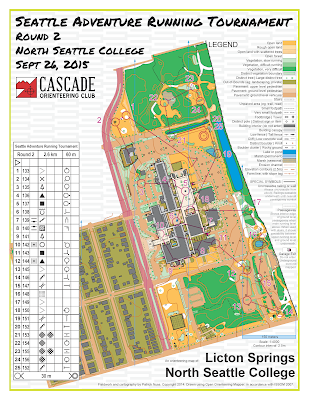 The third race was about a half hour away, at North Seattle College. This was a cool area, with a three-layer campus, always difficult to both map and understand on an orienteering map. I knew that this third race needed to be fast - I was up against Ali from my previous heat, and Will and Cameron, winners from our neighboring heat. I seriously doubted that I could beat Ali or Will, but the name of the game would be to make sure I was ahead of Cameron, and running fast enough to beat out the third-place runner from the neighboring heat. As expected, the heat started fast, but I felt comfortable and in control of my navigation, my legs having finally awoken to the fact that we're racing. Alas, I made a bad mistake on the 2nd control in the multi-level area, running a level too high because I didn't realize that we weren't using the third level, only the first two. D'oh! Combined with another 40-second error taking a very bad route to control 7, and I knew I was in trouble. I pushed the remainder of the course as hard as I could, but it wasn't enough. Third in my head, and 22nd overall, but about 20 seconds too slow compared to Nikolay, third place runner in the neighboring heat. Out! Now the best I could do was somewhere from 20th - 40th place.

Well, nothing to do but gather myself and run well in the fourth and final race of the day. At this point, I was starting to notice that I really hadn't done any training of note in the last two months, but thankfully energy was still relatively high, even if my legs were getting sore from all the high-speed running. Through a twist of fate, I was in a heat with Ed, so my sub-race was definitely to beat him. Maybe I was too cocky, but a heat that should have been mine to win went downhill fast, when I lost two minutes trying and failing to figure out levels on the way to the 2nd control. This multi-level orienteering is so different from anything I've ever trained or raced in before, that I couldn't get my mind to accept that the tunnel symbol actually meant building on the first level. I clawed my way back through most of the field, but it wasn't enough. I could see Ed around the 19th control, but unfortunately he knew he was ahead, and it turns out a man will suffer like he hasn't suffered in YEARS to stay ahead of his lady in a race. Cameron (from the previous heat) was just ahead of Ed, so I was racing for 3rd. I could only close the gap to about 10 seconds before the race ended. D'oh! Now relegated to 30-40th place. 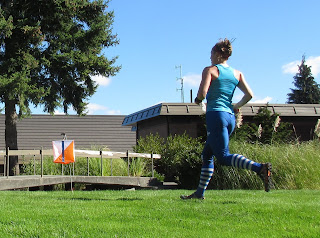 The final two races were at Shoreview Community College, on Sunday. I woke feeling rested, and despite being a little (a lot?) grumpy about making such huge mistakes the day before, I determined all I could do was move on, and perform as best as possible in these last two races. I crushed the first race, despite learning first-hand that you really can't take a shortcut through dense vegetation in Seattle - apparently those Himalayan blackberries are for real. Lost a minute tangled in vines, but thankfully emerged from the other side without losing too much blood.

The final race was forked, which meant we didn't all have the same order of controls, but we all went to them all eventually. It was a lot of fun, and I had a great battle withe Celia, a New Zealand runner who is living in Seattle for now. I found a little more in my legs to give on the finish chute of death, and held her off for the heat win, and 13th overall, but... 31st in the tournament. 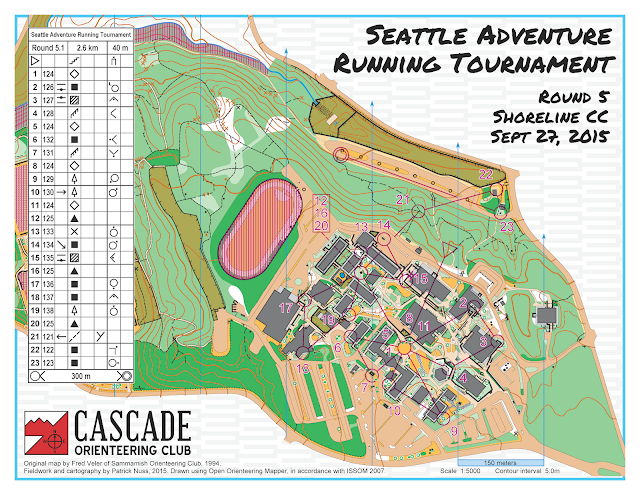 While this was definitely not my best showing at an orienteering race, it was an immensely fun format, and a fabulous weekend. I had been needing a bit of a kick to get going with some training again, and getting my butt kicked was exactly what the doctor ordered. Doing that much running was not great for my injury, but, the fun outweighed any pain. 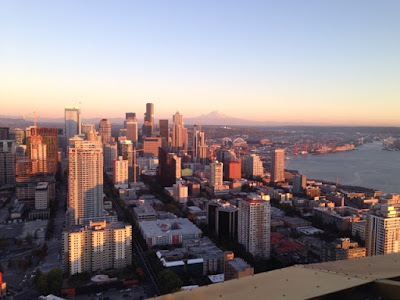 We spent Sunday evening exploring Seattle a bit, before it was back home on a red-eye. Totally worth the trip, and hopefully we can recreate that environment at Boston Sprint Camp next June!