After injuring my knee, I didn't think I'd be running the marathon I'd signed up for. Even if my knee were recovered by race day, I had done exactly 14 miles of running over those 33 days, none of it pain-free, and was feeling the effects of being completely out of shape. I had been on a bit of an accelerated marathon plan, transitioning from my usual mountain running fun to road miles for 12 weeks, and to miss five of those weeks meant I would find no success in this race. To put it simply, I was completely unready to run a marathon.

My intention was mostly to have a nice tourist-y weekend in a city that I'd never visited in summer. We nailed that, and had a truly lovely weekend, filled with walking, eating, drinking, and enjoying each other's company. I'd rented an Airbnb in Lévis, the city across the river from Quebec, within walking distance of the ferry over to Quebec City, which costs less than an MBTA bus. It was perfect, and we had a really nice Friday night wandering the old city. Saturday was more of the same, with a vague goal of finding the race expo to pick up my number, and then finding a poutine place I'd read about on a blog where the blogger was searching for the best poutine in Quebec City. We were not disappointed! The other very important find of the weekend was a chocolate shop in Lévis that made the best chocolate-dipped ice cream I have ever eaten in my life. This shop featured prominently in my motivation during the race on Sunday. 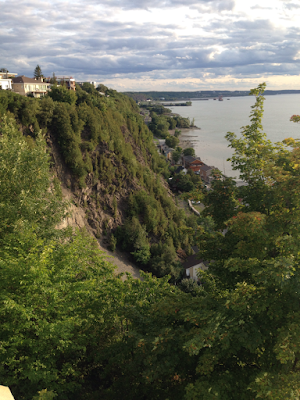 View from the Lévis side of the river. 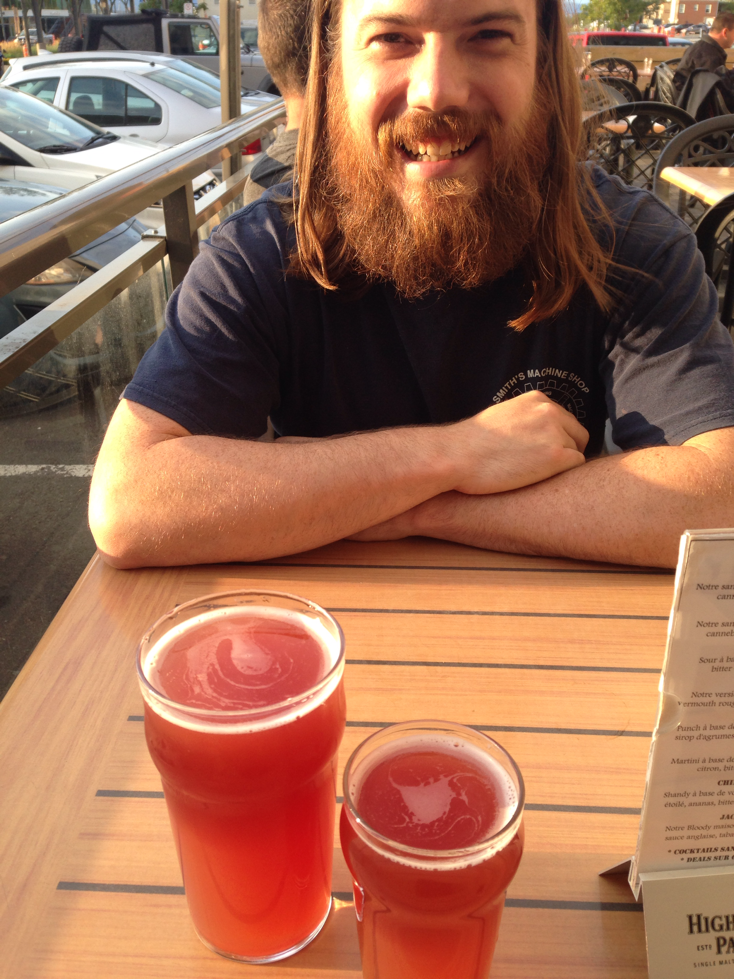 The big one was for Ed, the little one for me. Very enjoyable hibiscus blond ale! 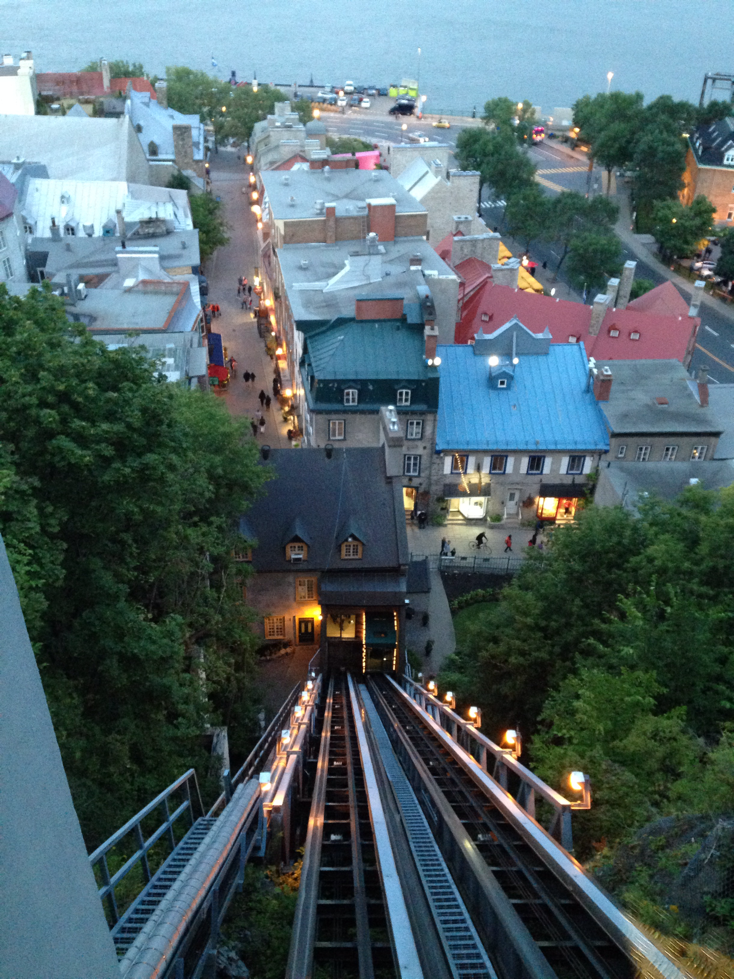 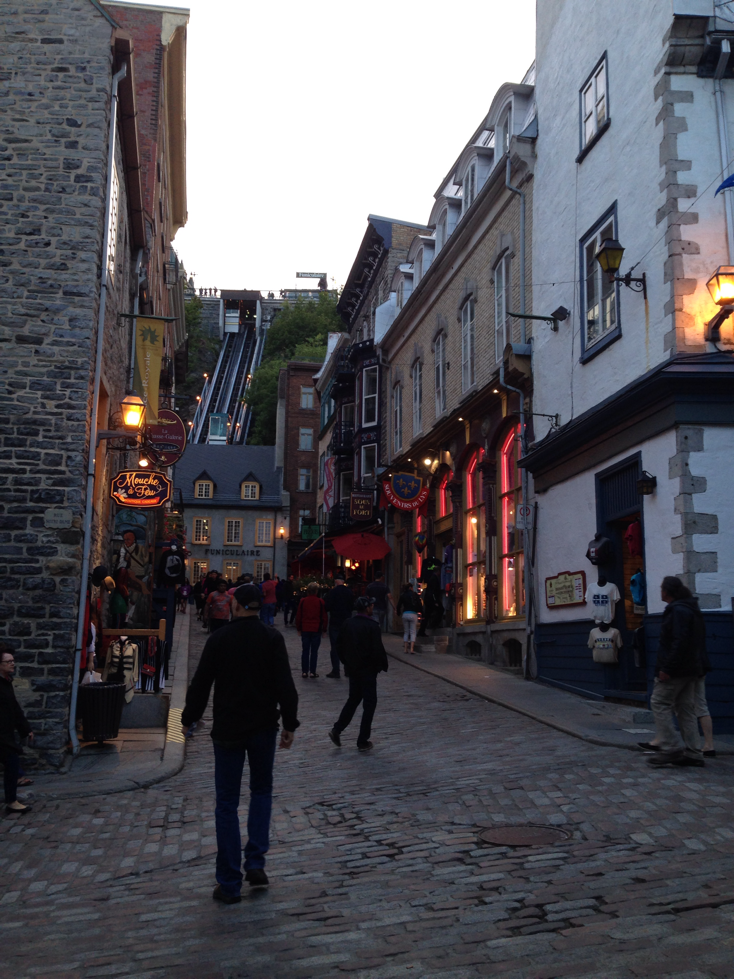 Funicular! Had to take it to save my legs, and also because a certain engineer needed to see how it worked from the inside. 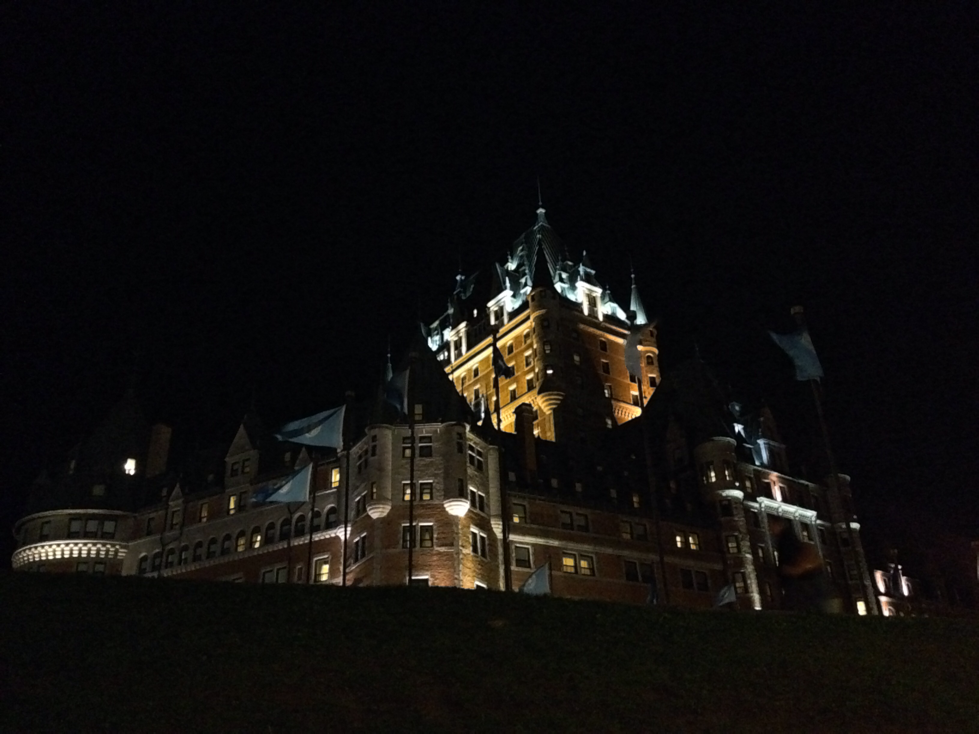 Hotel Frontenac, lit up by night 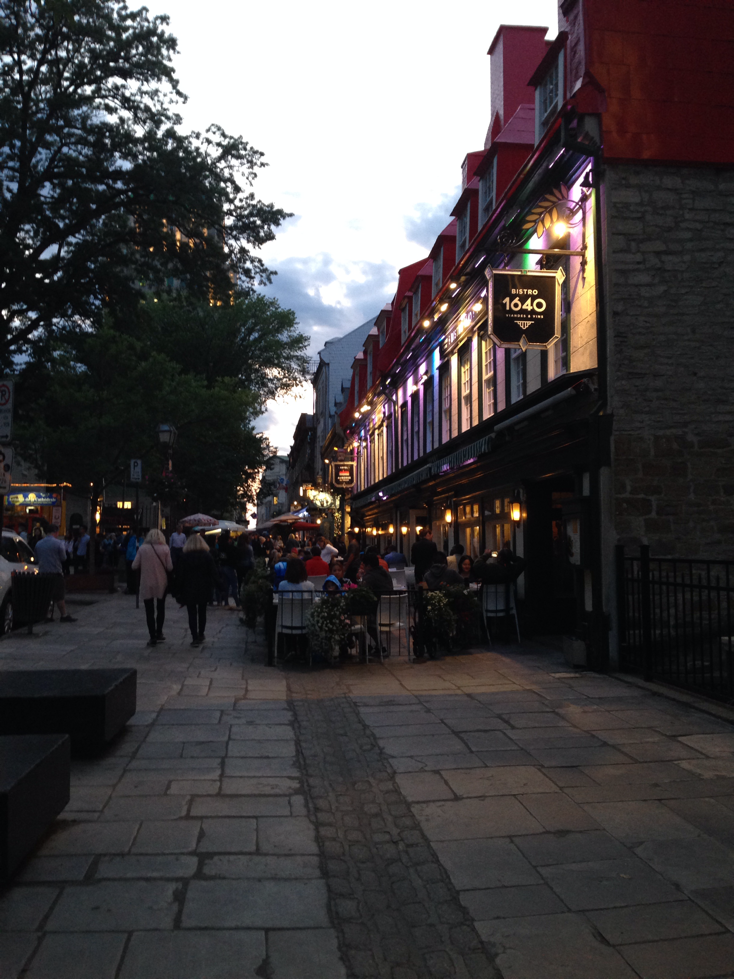 This city has such great walkable streets 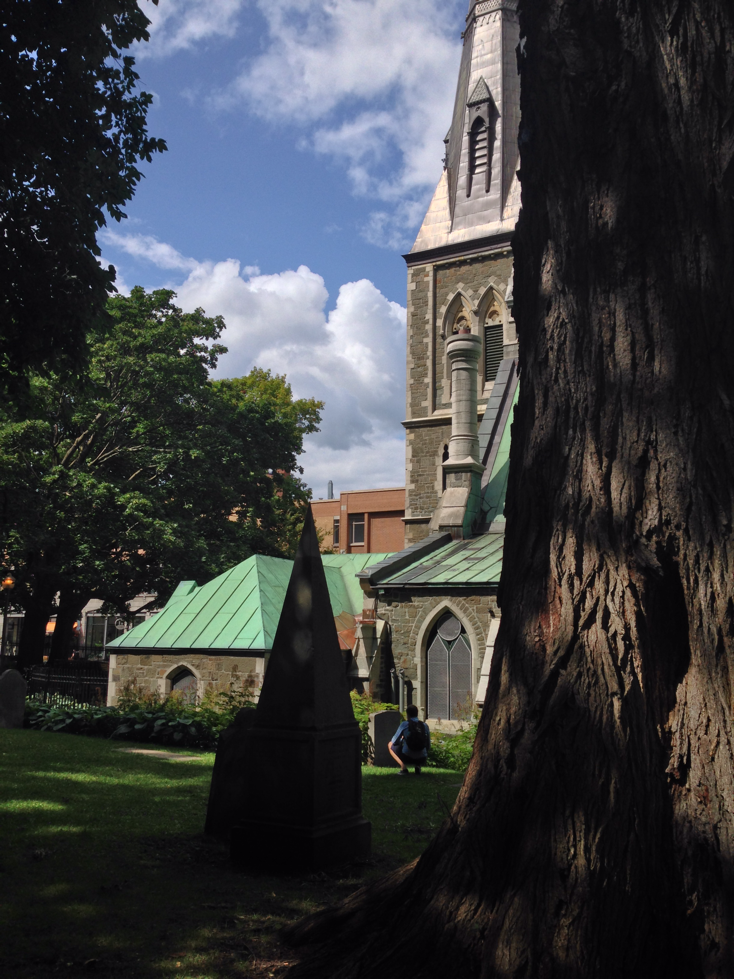 Elm trees!! I don't think I've ever seen a live elm before. 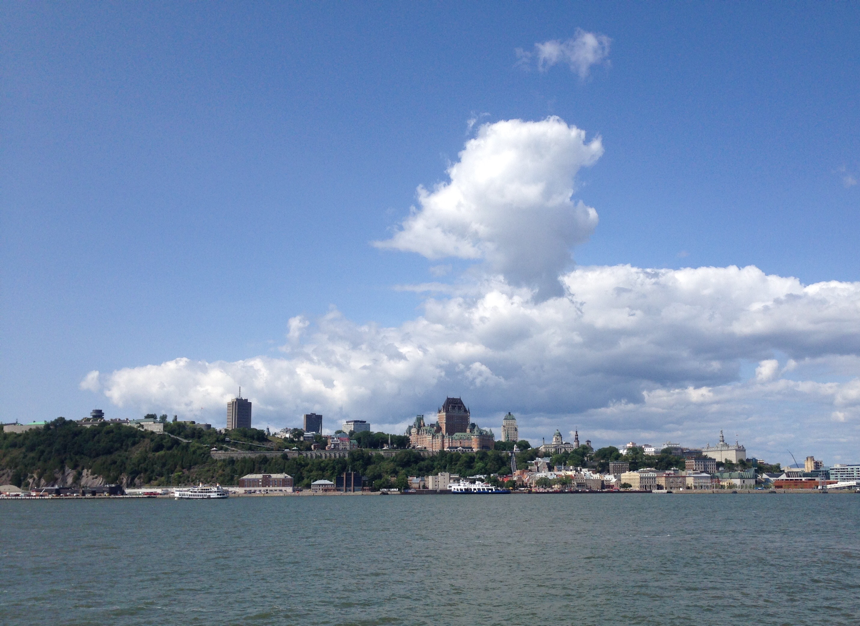 View from across the river. Apparently many hundreds of cannonballs were shot from this position at various points of history. 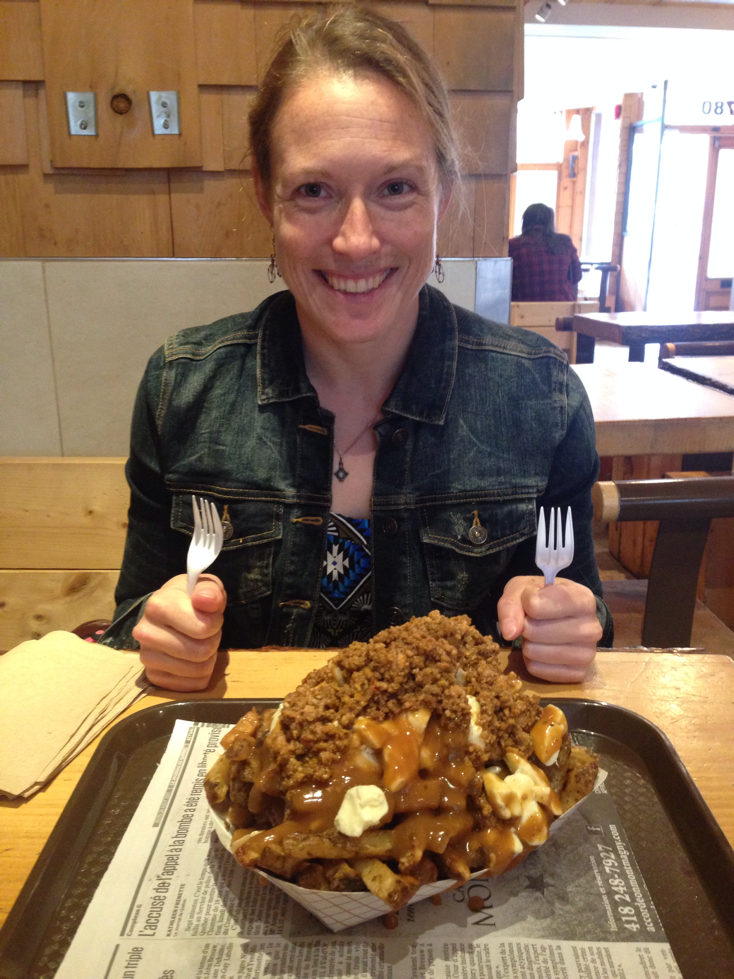 Poutine, from the Snack Shack. 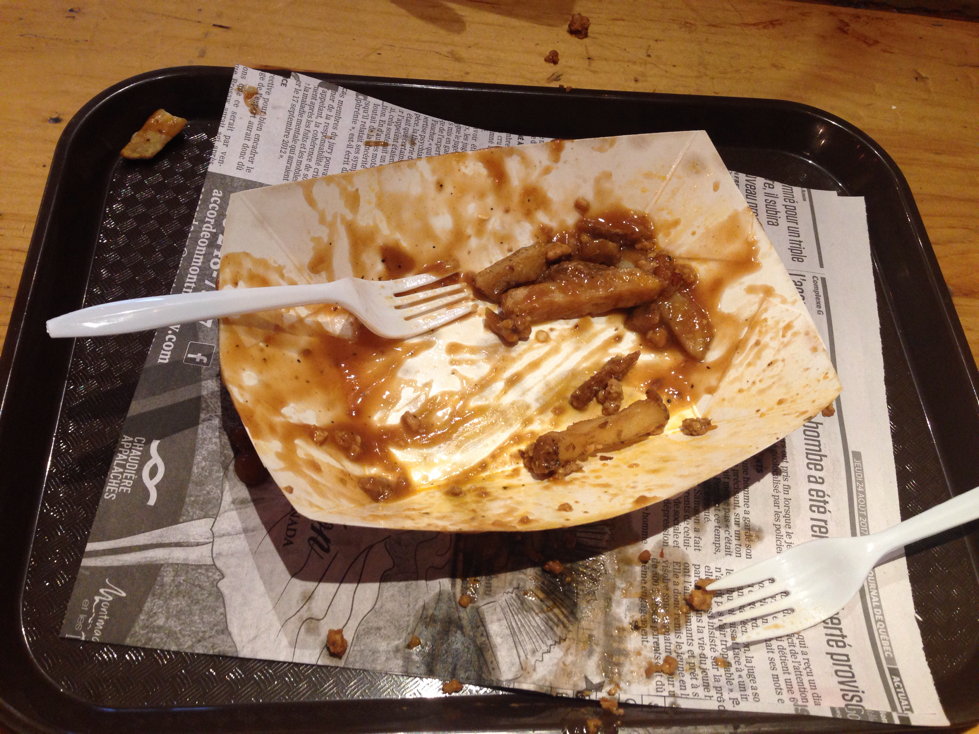 One of several poor decisions to finish something this weekend. 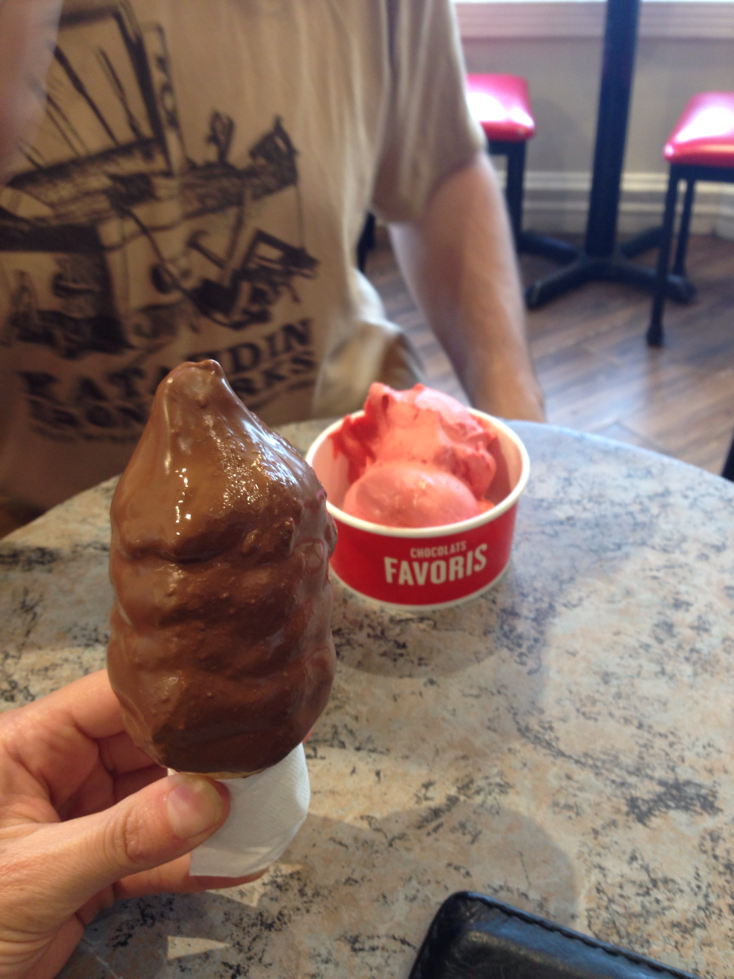 That chocolate shell was like 1/4" thick, no joke. This was the hazelnut version.

After a quiet night in, it was time to start thinking about this long run I was doing on Sunday. I'd been sort of ignoring it, trying not to think about how unprepared I was. At some level, I knew it was a bad idea to start the race, but I also knew that I'd kick myself if I didn't try. My Physical Therapist hadn't thought that I'd be doing any structural damage if I ran, but advised to let pain be my guide. My race plan, such as it was, was to head out at the slowest pace that would still qualify me for Boston. I had 5k splits written on my arm, to keep me honest. If I started to drop below those splits, I was to drop from the race. 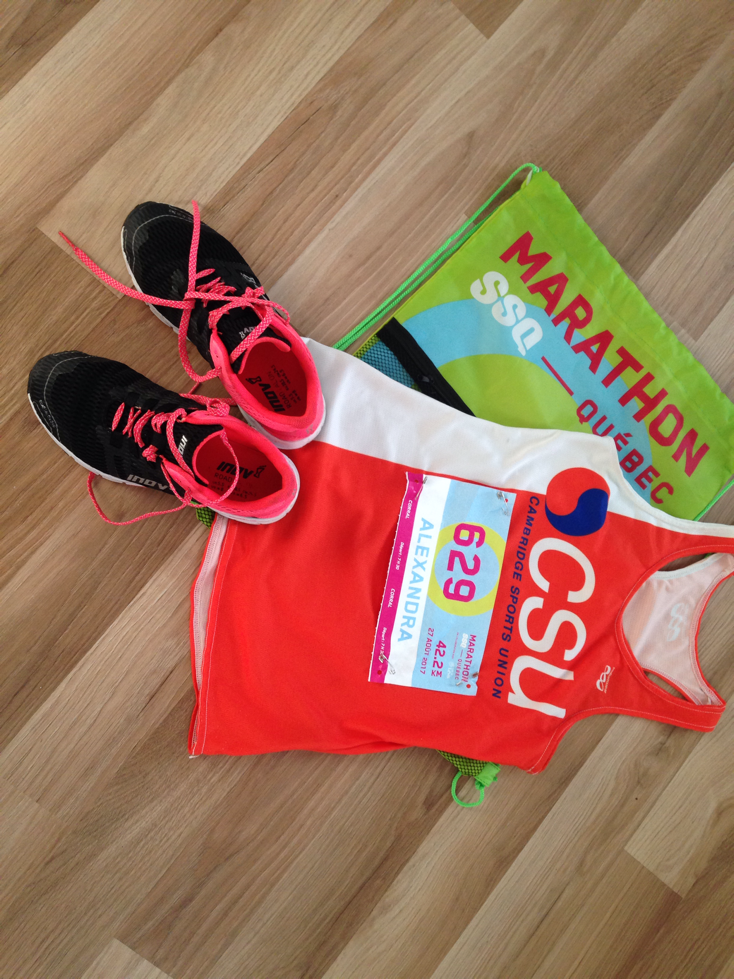 4:30 rolled around and I had no trouble getting down oatmeal and coffee. The lack of nerves almost scared me, but I realized that meant I had the right attitude - it was just going to be a waiting game, and see what my legs do. Ed dropped me off at the start, and it was downright chilly, but I knew I'd warm up. The race had people wearing rabbit ears, who were the pace bunnies, and after an easy warmup, I lined up a couple rows behind the 3:30 bunny. Off we went, and it felt similar to the ultras that I've done, just chilling with a bunch of other people, some chitchat, the pattering of feet. The 3:30 bunny was running closer to 7:40 than 8-minute pace, so I dropped back, monitoring my own pace and heartrate. My knee had no feels, happy to jog along.

The course started up on top of the plateau, and after an ever-so-slight rise, it cruised downhill for the next couple miles. This part was great, the game was all about not running too fast, and the cool weather and lack of any fatigue in my legs (see, there are *some* upsides to not doing any training, whatsoever, before your marathon!) made me feel pretty awesome. Ed was cheering for me at around 7mi, and seeing him gave me a warm fuzzy. 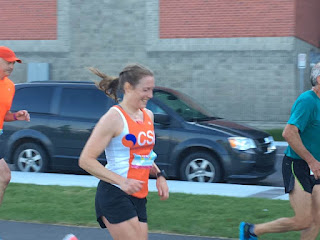 At that point, though, the course flattened out along the river. There was a bit of a headwind, and without the downhill to carry me along, I started to notice my lack of fitness. My heart rate started to climb, even though I was still holding the pace fine. I knew that if my heart rate got much above my anaerobic threshold, I would be cooked, but I also knew that slowing down wasn't an option in this race plan. Go at that pace until you can't hold it anymore. I did have a bit of a time buffer thanks to the easy early miles, but as the work started to accumulate, I knew I was in trouble. The halfway point was still on pace, but I was working way too hard.

Shortly after the halfway point, the course started to climb, gradually, back up the embankment to cross the route 173 bridge. This is where my fitness ran out. I could fake it for 14 miles, but that was where it ended. I did some walking up the hills, willing my heartrate back down to a sustainable level, but I knew that this was probably the end of my Boston shot. Coming across the bridge, the blister under my toe started to become unbearable, and my hips started to tighten up. Curse this lack of running training! At this point, according to my plan, I was supposed to drop out. I had just dropped a 28-min 5k, and there was no reason to believe that it would get any better. But my race brain managed to convince my legs that maybe they'd pick up the pace again coming off the bridge. You're right! Downhills are awesome!

So then I was down from the bridge, and both hip abductors cramped up, violently. Oof. There was some point, coming down from that bridge, where I had decided that I wanted to finish this thing. I knew at that point that I was done - I could not speed up, not without my legs cramping up. But, what is eight miles in the grand scheme of things? I should be able to tough this out. I want to finish this marathon. I'm an idiot. So, I kept moving, and the abductor cramps faded, to be replaced with adductor cramps, off and on. I had been walking through all the aid stations the whole race, to drink down the entirety of my cup of water or gatorade or whatever it was I was needing at that moment, but now I was starting to walk for longer periods through the aids. Again, should have just dropped. The next muscles to go was the right calf, exhausted from trying to protect my gimpy right ankle. My hamstrings were threatening, but since I wasn't really striding anymore, just sorta shuffling, those were holding out. I started to walk more. Soon forced myself into a rhythm - run 180 strides, walk 45. I did more pace counting in that last 10k than I've done in my entire orienteering career.

The last 10k were terrible. I mean, I should have expected this. There is no reason to believe that I should be able to run a marathon after five weeks of not training, and on a pretty minimal plan before that. It was just my head pushing me to the end. I just wanted to say I had done it. Why?!? Every time I tried to move faster, some muscle in my leg would protest by cramping violently, so even the running parts were barely moving. But I couldn't let myself stop. Eventually I crossed the line, and my pride was utterly shattered. I was nearly an hour slower than I had wanted or needed to be. I did not belong there remotely. Why do I have these ridiculous ideas about finishing races? Why can't I do the reasonable thing and drop out when it makes sense? I guess nothing hurt badly enough to actually do that.

Ed was waiting for me at the finish, and managed not to laugh too badly at my distress as I tried to put on sandals with every leg muscle cramping. We very slowly made our way back 2km to the ferry, and I think that slow waddle was very good for my recovery, considering the next activity would be to sit in a car for 7 hours. Ed is the real hero, for doing all the driving! 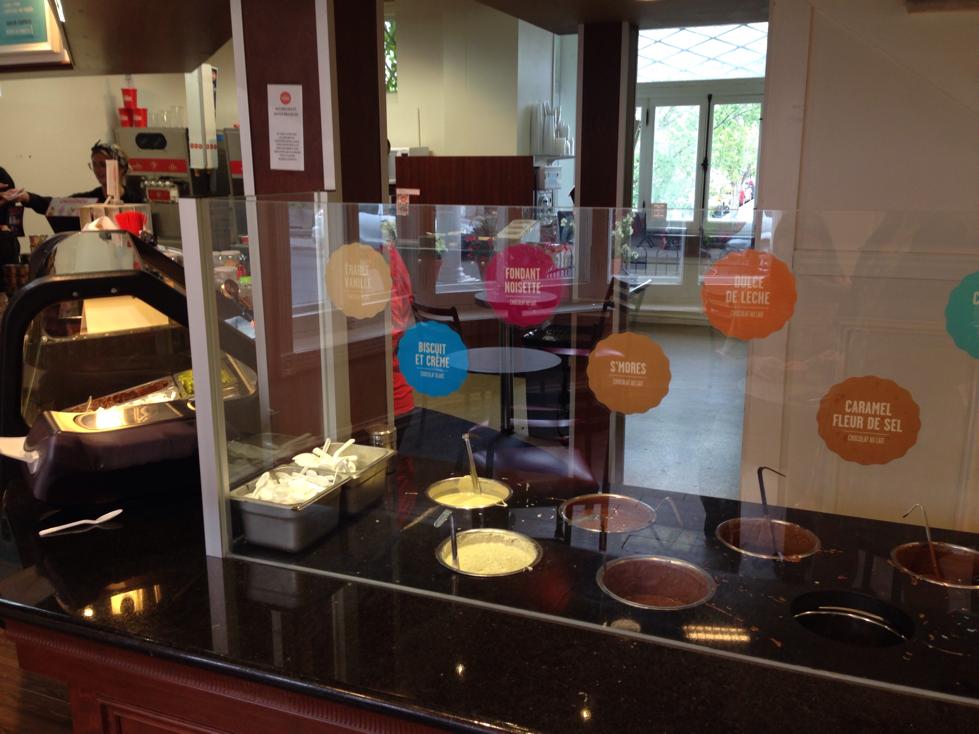 But before the car ride home, chocolate-dipped ice cream! Boy was that ever tasty.
Posted by Alex at 12:47 PM