Yesterday was the 29th annual billygoat. The billygoat is an orienteering race that is a little unique--you can follow people (in fact, following is "explicitly permitted"), and you can skip one control. Which can get you in trouble if you're following people and they skip a control and you don't notice, or variations on that theme. The other thing about the Billygoat is that if you finish in under 3.5 hours, you get a t-shirt. Its a pride thing too, its considered a DNF if you finish in after 3.5.

So, Ed and I drove over from Vermont the night before, got our numbers, read the instructions, and headed to the start. Its a mass start, and basically, everybody just runs in the same direction as the people in front. Which would suck if the people in front went the wrong way. But, they went the right way, and we sort of all got to #1 in a big strung out pack. I decided that since this was the first running I had done on my shin I was going to take it pretty easy, so I backed off to just run my own race. I was feeling relatively confident in my navigational skills (my confidence in my orienteering varies from day to day...), and it was sunny out, so I was in a chill sort of mood. I ended up running most of the course with adventure racer Tracy Olafson, I think of racingahead.com; she had a daughter ski at UNH, and we sort of know each other, so it was a pretty chatty race all in all.

I was pretty much hitting each control spot on, and if for some reason I felt like I wasn't going in the right direction, the woods were so muddy you could just look for the elephant trail where the lead group had gone through. Eventually we had it down to a group of four, with me doing most of the navigating. Around control #13, I took a better route over a cliff, and dropped that little group. I ended up putting about 10 minutes on Tracy and co., but I lost some time on the woman who had only been about 4 minutes ahead of us at the feed station.

I ended up running controls 14-25 alone, just doing my own thing, and mostly navigating pretty well. My shin held out great, which I think means I can start running again (easy). I finished in 2:23, well under the 3.5hr cutoff, and Ed finished soon after, in 2:35 or something. This was a considerably nicer course than the other two Billygoats that I've run--there were some long legs, and some slightly technical ones with no catching features if you overran it, but overall, it was a very runnable course. Plus, it was sunny. Did I mention that already? After all the rain we've been having, even if the woods were insanely muddy, the sun felt great. 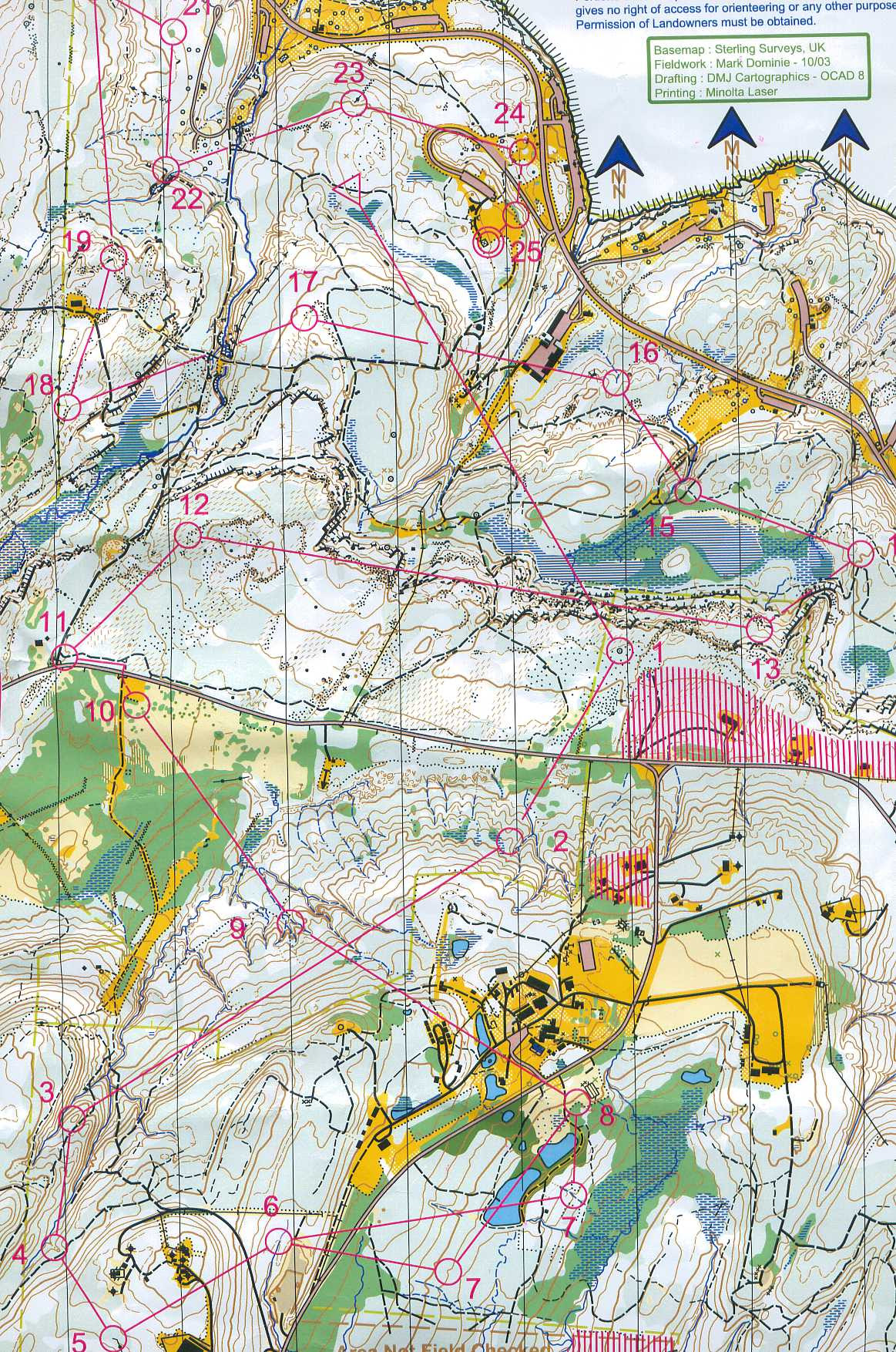 Here is the map, except for #20 which didn't fit apparently. scanning credit to Peter Gagarin, an orienteer who posts his maps online. A muddy, but extremely fun, course!

As an afterthought, maybe a two and a half hour run in the woods was not the best way to see if my shin could handle running. But it can!
Posted by Alex at 8:31 AM