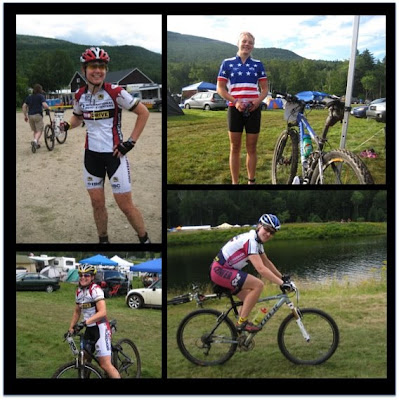 The team! Rachel, Caitlin (yes, thats a national champion jersey), me, and Callie

I did this event last year on an IBC sport team, and I kind of had a rough time, losing our team a lap by forgetting my timing chip, cracking my helmet, breaking my light, and busting up my knee badly enough that it wasn't really healed until November. This year was considerably better! Rachel and I had expected an easy time to find more teammates, but we were still looking for female bike riders as of last wednesday, and thank god Callie pulled through, because I was starting to think I'd have to train a monkey from Patrice's lab to ride a bike.

The weather forecast called for rain and the occasional thunderstorm, so I prepared by packing nine pairs of socks. That was smart. I also prepared by making some pancake batter and putting that and maple syrup into a cooler. That was also smart. I don't want to make it sound like I am actually smart, though, because I did forget the frying pan.

Ed and I drove up Saturday morning to meet up with the rest of my team, and things went by pretty quickly until race start. We decided that I would go first, because, in Rachel's words, "you can run. I've seen you do it!" and it was hard to deny that one... 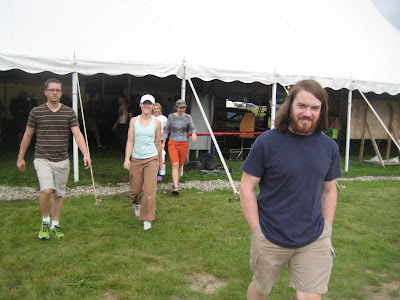 The suspects. Foreground is Ed, trying to shrink so that the camera won't get him. Behind him are Dave and Callie, then Rachel, and Caitlin is sneaking in the background. 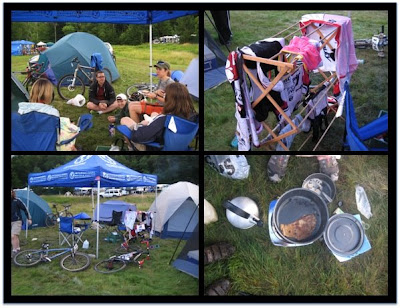 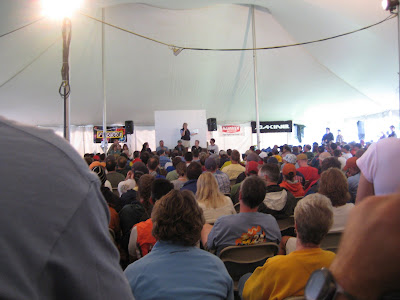 It starts with a meeting in the big tent, where they tell us to not get eaten by black bears or struck by lightning. Good advice. 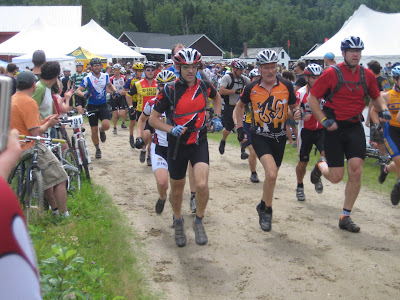 The race starts with a lap around the lake, and then you try and find your bike and ride away. Ed was taking pictures, and somehow forgot that the big guy I was trying to get around wasn't going to magically become transparent... 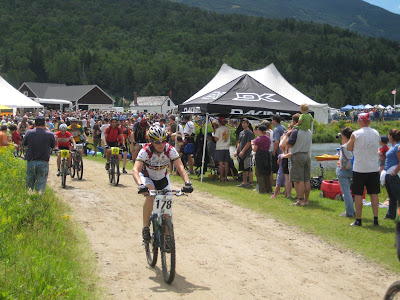 Then we got on our bikes and suddenly the whole "no-warmup" thing catches up and I'm horribly out of breath and my legs already hurt and I have many hours of riding ahead of me... Luckily, my strategic starting position allowed me to slowly walk my bike in a conga line through the field by the ski lodge and admire the blueberries.

The race spread out surprisingly quickly, probably due to lots of uphill on big wide roads, and there seemed to be a lot less singletrack than I remembered. We got to the part with the rock thing that I couldn't ride last year, and I couldn't ride it this year either, so I just started running and actually caught up to some riders that way... After that its more climbing on fireroad, then a really muddy climb on the great grumpy grade, which I remember being rideable last year, but the mud just bogged me down too much this year, in fact I didn't get on my bike once on that section first lap, the mud was just too deep to make it worth it to get on my bike just to get back off. I tried to ride down the hill, but until some lines got ridden by people stronger than me I couldn't pedal through the deep mud, and was back off the bike. After that, the course went into the mud bogs of death, a relatively short section that was knee deep mud puddles, ending in a muddy climb. This whole section of the course filled me with dread each lap.

Once the mud bogs of death were finished, you descended for a while on fireroads, did a short loop of singletrack that had a REALLY deep mudpit that I made the mistake of falling into one lap (the bike just stops when you are sitting in a three-foot-deep puddle. And then its impossible to get the bike out of the puddle... good times), a little more fireroad, and the loop onto the plunge. The first part of this last section was rideable, but then I'd have to hike/run the steeper uphill section, and I skied down the plunge, mostly using the bike for balance as I slid downhill. Then you were essentially done, just had to ride around the pond. I came through the first lap in 55 minutes or so, kind of surprised it had taken so long, since that is slower than what I was riding last year, despite the course being shorter this year.

Rachel went next, then Callie, then Caitlin. We are all pretty solid riders, I think Caitlin is definitely fastest, having just won mt. snow in the expert 19-34 group, but the whole never having ridden at night thing slowed her down. My laps were disgustingly inconsistent, but I was ok with that. Really, we just had to finish, being the only team in our category. By my second lap, the course was slightly better, except in the mudbogs of death, which were deeper and threatening to take my shoes to their depths. It was really nice of Ed to clean and lube our bikes after each lap, because without that, well I don't think my bike would have made it more than three laps before I'd be stuck in one gear with no brakes. Not that I can't clean my own bike, its just really nice having someone else do it. I finished the second lap riding hard, hoping to break fifty minutes, but that just wasn't happening, and I did a 52. I just couldn't ride any faster, or maybe I should say I couldn't run any faster. I got my priorities straight after that lap, and spent an hour or two picking a massive amount of blueberries on the hillside next to the ski lodge, watching riders labor through the muck and try and make the turns.

Caitlin decided that she wanted to try a double lap, so we switched up the order to let her get in a daylight and a twilight lap while I got dinner, and Rachel took the first real night lap, before we switched to 1-2-1-2-3-4-3-4 to let us sleep more. My first night lap was decent, I was motivated to keep running through most of the mud, although I was riding even less of the course than before because I just couldn't tell if the mud would be thin enough to keep riding or if I should just keep running, and I'd usually just keep running. I felt pretty good through most of that lap, turning in a 56 minute lap, but after Rachel went and I headed out again, my legs let their unhappiness be known, and my lively running turned into a less-lively hike-a-bike. I was getting sick of all the not-riding we were doing, I wish I'd ridden in toe straps and orienteering cleats or something, just for comfort, because I was getting blisters from my mtb shoes, despite cleaning them out in the river after each lap and putting on new socks. That lap was 1:03 or something... oops.

I rode my next lap around 4:30. I barely made it to transition when Caitlin came through, I was still pulling on my gloves, but I got out there and just started pedaling, doing the first section a little slower to warm up my stiff, sleepy body. I was finding that even though it feels like you're alone out there, every time you turn a corner or come out of some singletrack, there is someone right ahead of you to catch, so that was motivating. I think I turned a 59 minute lap (see what I mean about disgustingly inconsistent?), but it was dawn, which is one of my favorite times to be outside, so I was happy. And then Ed made me blueberry pancakes when I got back. I think that was my favorite part. 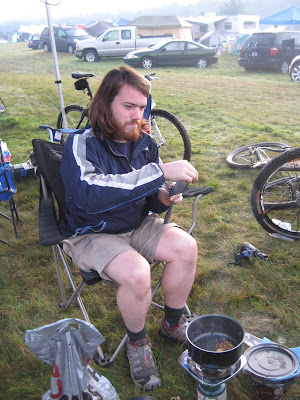 Salvation in the form of blueberry pancakes. Yes, the blueberries came from that first hill we rode up... and no, I did not pick them while racing. Master chef here works the magic. 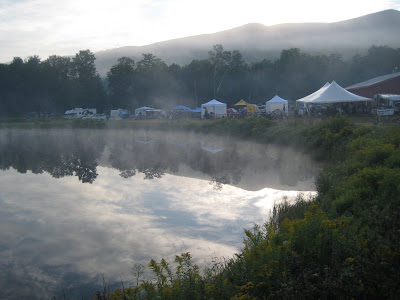 Solo camps in the misty morning. 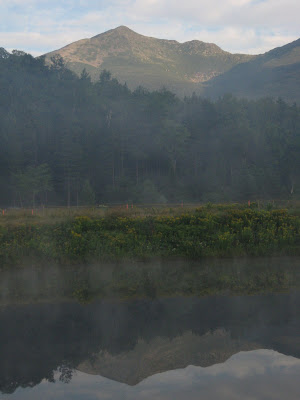 Mt. Adams (I think) and his reflection. 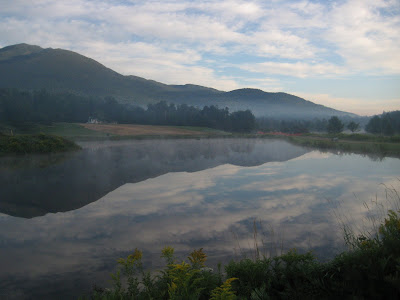 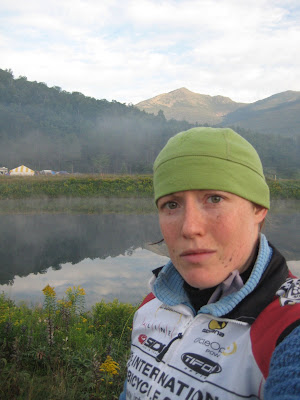 After that dawn lap, we were back on our 1-2-3-4 rotation, so I headed out for another lap at 9:15. I went out for my sixth lap sort of warmed up, which helped with the bike-riding thing, and the great thing was that even more of the course was rideable, since the predicted rain hadn't come and things were almost drying out in places. I still had to run the second half of the rock singletrack, and the upper part of the great grumpy grade, but I could ride the downhill, although it was more of a slide than a ride. Who says sliding diagonally down a hill isn't fun? I suppose I should be glad that the bike didn't roll that well, since the brakes didn't work that well either! The mud bogs of death still sucked, but the little rise after that was rideable, and I was in a pretty good mood as I skied down the plunge and finished up the lap, a 54 minute blaster.

Rachel went out again, and then it was my turn again. I'd already decided that there was no need to race the lap, just go ride since its actually a bike ride again instead of a run, and I had a good time out there chatting with some kid who was pulling wheelies wherever he got the chance. He convinced me to take a different line down the plunge, the one all the way to the left, and that wasn't even plunging, it was dry and not steep, I wish I'd known about that for my other laps. Anyway, I finished the lap in 1:01, surprisingly fast for an easy lap, and I was really pleased that I'd ridden the plunge. We were all in a great mood once we were done, it was a fun race and a great match of personalities on the team. And then Linnea's parents showed up with goat cheese, and I gorged myself on cheese and life was good.

The rain held off until awards, when it came down with a vengeance, and then driving home through the lakes region, we went through the coolest storm I've ever been in. Hail, huge hail balls, and lightning blowing up transformers on the telephone poles. Not a good day for rollerskiing. 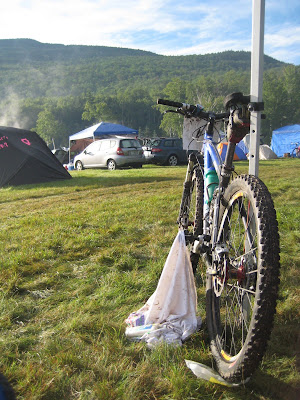 Wow, I was just looking at the results and saw that you beat the team behind you by ONE SECOND thanks to you passing them on the last lap. Do you remember that??

I guess I must have passed them right at the end by the pond, then? I remember passing a guy in a yellow jersey just before the end, and I think some kid across the mat, maybe. I wasn't really paying attention...