I was noticing the amount of roadkill recently. It seems as though every time I go rollerskiing or biking on the road, I'm seeing dead animals pretty frequently. Over 35 miles of rollerskiing last Saturday, I saw a dead bat, two dead frogs, countless dead salamanders, two dead birds, a dead mouse, many dead earthworms, a slug or two (squashed dead), and a dead racoon. The racoon was in the middle of the road, so Ken moved it. I wish I'd had a camera on me, but since I didn't, I'll leave you with my strikingly lifelike interpretation: 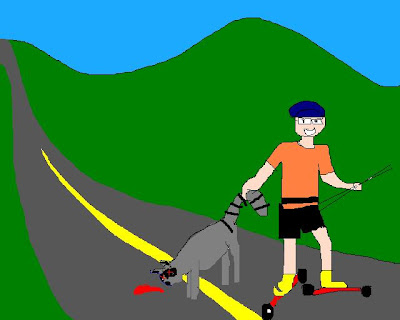 But all this roadkill makes me wonder. If there are so many dead animals on one 35-mile stretch of road, can you extrapolate and say that there are this many dead animals everywhere? I'm not going to go all PETA (that's People for the Eating of Tasty Animals, right?), I'm just saying, roads have a helluva bigger impact on our world than we'd like to think, and roadkill is just the most obvious one.

Nothing beats the suicidal chipmonk when I was riding the gaps last summer, though, that *tried* to run through Blazar's wheel... it didn't make it. We call that natural selection.
Posted by Alex at 9:14 AM

I just checked out Freddie and Kline's blogs. Yours is cooler Alex. I'm gonna bump it up a notch and do an eastern cup this year.

Did my blog inspire you to take up skiing again? Must have been my beautiful artwork.

And, I'm holding you to that Eastern Cup comment.

I am looking for a group to carpool to Weston Ski Track with this winter. I skied with the club team at UW-Madison as an undergrad but have been more focused on rowing since then. Do you know anyone who regularly makes the trip from Cambridge?