I raced more 'cross this weekend. True to form, it was an unimpressive performance. I really need to understand that you just can't do well in something if you don't train specifically for it, and "biking to work" does not equal "training". Maybe I'll figure that out some day.

Anyway, I could have sworn that this course was fun, and technical. Maybe thats because the last time I rode it was on my mtb and it was frosty or frozen or something. Or I just blocked the parts I didn't like out of my head. Anyway, I showed up, rode the course, and decided that it was basically Gloucester but with more fun stuff interspersed. Lots of power sections. I decided that today would be the day I would stop bitching about power sections and just go faster. Seems like a good plan.

Since IBC was helping to sponsor this race, I helped out at registration for a while. It was pretty chilly. Luckily, I'd brought a blanket. People were jealous. Still, I got pretty cold by 1pm. The chili was delicious and very warm, so a huge thanks out to the guys serving food to the volunteers! 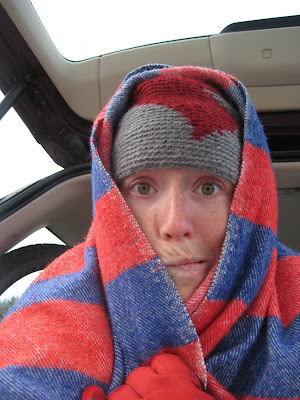 2pm rolled around and I was kitted up and on my bike, despite some serious wimp-talk in my head. My feet were cold, it was windy, my ears were cold, my nose was snotty. I lined up behind Libby, because that girl starts like a rocket, and found myself in the top 10. Cool. This won't last. Libby and I yo-yoed, mostly she was in front and I would occasionally make contact and then we hit something flat and she'd go a lot faster than me. I will admit, I bungled the transition to the runup once or twice...

Anyway, we only ended up doing four laps, so I guess they were long. First lap was pretty uneventful, I was mostly chasing Libby, and then going up the pavement, three girls caught me. I think it was Rebecca Blatt, some NEBCer, and another girl. I tried to go fast, I swear, I did. But I couldn't even hold a wheel. Luckily, the first part of the field had enough turns and stuff that I'd caught back up by the pavement in the back, and I realized, hey, this drafting thing is pretty nice! Then through the loops and mini-barriers, I realized, hey, this accordion thing sucks! So I passed three of the girls, couldn't get past Sarah from Landry's, but I figured there was no way she would be holding me up in corners. By the top of the runup, I'd actually put a small gap on the other three girls, woot! And then on the backstretch of the track they went by me so fast I couldn't even contemplate holding a wheel. Caught up in the corners, probably thanks to the accordion effect slowing down the one in back, and then there were more straights, and I got dropped again. Hard.

Lap three (I don't know what happened to lap two either), the group I had wanted to ride with (please, can I play with you? please?) had passed Libby, so I set about catching her. I made contact by the pavement in the back, and sort of hung on, yo-yoing more than drafting, until she almost washed out in a corner in the back where I passed her, got a small gap by the top of the runup, and got passed like I was standing still on the track. I'm sensing a pattern. By the time I hit the pavement, I knew I had one lap left, and I was determined to catch Libby, possibly Rebecca, and not let Sue Mclean or Marci Titus-hall catch me. Caught back up to Libby (I AM the definition of yo-yoing) as we hit the back pavement, and she stopped pedalling there, I heard she got a flat so maybe thats where she did it. But I was just glad I'd passed her because it gave Sue and Marci someone else to focus their energies on and reel in, and hopefully I'd get away. I went as hard as I could everywhere I could, but Marci had my wheel by the turns before the runup. I tried to ride off the course there, held it together but no gap at the top of the runup, but I didn't lose her wheel on the track as quickly as I'd lost every elses'! This was exciting, and I had almost made contact by the third turn.

pedalpedalpedal pantpantpant pedalpedalpedal pantpantpant CLUNK nosewheelie almost-bite it. Huh? Why won't my chain turn? Sue goes by. Some fiddling, oh, its off the derailleur pulley. More fiddling. More swearing. Oh, the wheel isn't on. More swearing. Cathy and Hannah go by. Wheel is in, back on bike, really, really, really pissed off. Kate from MIT has caught up to me. I go as fast as I can over the barriers, hoping to put time on her, but its not enough, she goes by from like 30ft back and my "sprint" was more pathetic looking than a kitten in a bath. Who knows if I could have held on to Marci and Sue, but it certainly burns to lose five places because of a mechanical that was totally preventable. Lesson learned... 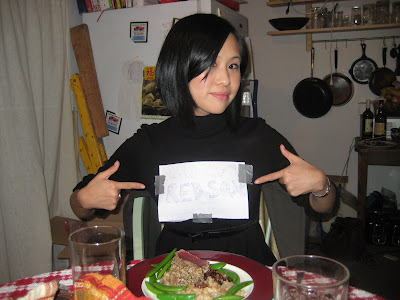 And then Tiffany and Mario came over for dinner and we had an amazing dinner, but Tiffany had forgotten her lucky red sox shirt, so had to make one. We think it was the improvised shirt that caused the loss of the game.
Posted by Alex at 11:24 AM

I was so sad for you when I went by. You were having a great race! I have, however, had the same mechanical this season (although on a training ride), and it is scary!

Thanks to all of IBC for putting on a great race.

Thanks for the empathy! I don't know if I would have had the energy to be that kind if the situation were reversed, I probably would have thought "sweet! Cathy's out of the game! One more place away from last!" More proof that you are just a better person than I am...

Unfortunately, mechanicals are a part of the game... frustrating, nonetheless. Awesome race yesterday!

I hear you on the accordion stuff, I'd catch up to people on the track and then lose them on that grass straight.

Hey, I recognize that blanket! its the back-of-the-silver-van-for-10-years blanket! But always warm at every sporting event we ever went to!