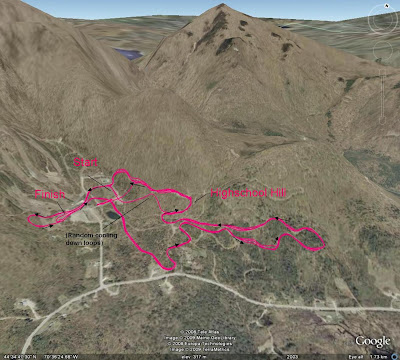 Sunday dawned not quite as chilly with snow falling. The race was a 10km mass start classic race, and I was seeded #38, which put me in the fifth row. It was snowing nonstop through the J2 races before us and through our race, so the tracks were barely there in places, but were definitely faster than the loose powdery stuff out of the beaten trail. The gun went off, and we all started scrambling. I was in the middle of the field, and so pretty stuck in terms of getting around people, since there was just nowhere to go. We came through the stadium and the girl in front of me came to a stop as we started climbing, so I managed to sneak around a couple people on the outside, before we headed into the downhill. It was crazy, just this long line of people, some double poling, some tucking, nobody going anywhere fast, but just fast enough that if you got out of the tracks it was decidedly slower. Finally we started some uphills and I could scramble around some people, but it was still pretty packed. Going up highschool hill the first lap was basically a walk, since there was just nowhere to go.

By the second lap things were spreading out a little, and my fast skis were making quick work of the downhills. It was still pretty tight, but no more walking, thank goodness. I found myself in a group with some Bates and UNH girls, and going up highschool hill the second time the Bates team was going crazy cheering. I just told myself that they were cheering for me, and let that boost me over the top. By the next little uphill I'd caught a girl from Burke, and I could see a group with some Dartmouth skiers, but there just wasn't enough course left to catch the Dartmouth girls. I felt like I was slogging out there, but i guess everyone else was, too, because I didn't finish all that far back, even though it felt like I was in 50th place. I ended up 24th, which is an improvement over my starting seed, so that is a positive way to end it!

Now I'm off to Europe for a week or two; a couple days in London to visit my grandfather and then over to Sweden for the Nordic Orienteering Championships, near Mora. Internet will be spotty, but I'll do my best to keep you posted on how things are going. I expect to place much higher in the world championships this march than I will next week, since the Scandinavian countries can only send six women to the world champs, and this event will be very well attended. Given how much ski-o training I've been doing recently (none), this could be a painful stab to my ego!
Posted by Alex at 11:27 AM

Nice race! Have fun in Europe! I was just reading something on the IFK Mora club website about the orienteering: they're as nutty for it as they were last year.

You should give it a try! Orienteering is always a blast, and even more so on skis.