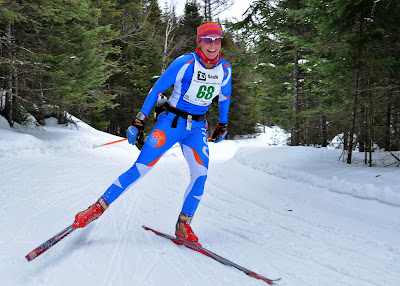 I've been under this impression, the last couple years, that Rangeley is a flat, fast, marathon, and that I like the course. None of this is true, but I'll probably forget that none of it is true and do the race again next year. Rangeley actually has some 10+ minute climbs (like the stupid climb from ~13 - 15k), and the downhills are all gradual enough that you have to work them. Not my sort of course at all, although to its credit, there is a lot of transitional, windy, V2 stuff too. I guess you have to have a lot of terrain over a 25k loop.

Last Wednesday, Ali and I were doing some double pole intervals, in the three-minute range. We did the last one skating, and I noted that my legs were pretty tired. I chalked it up to the fact that this was the last interval, didn't think too much more about it, did some one-minute puke-pace intervals with the CSU juniors on thursday just because why not?, and then spent most of Friday running around stressed about stuff. So I guess it shouldn't have been much of a surprise that my legs felt heavy on Saturday, but I was really hoping that it was a superficial thing, and I wouldn't feel tired while racing. Not sure it actually works that way...

I deliberated over which skis to use for far too long before this race. The forecast was for high thirties, with snow showers giving way to rain showers. The snow was powdery-looking, but wet. My slightly-drier-ground skis tested faster before the race, and it looked cloudy enough that the sun wouldn't come out to change things, so I went with those. Burned in some fluoros, skied around for five minutes and called it a warmup, and went to the start.

This course starts with like 3km of downhill, which means that things stay bunched, and I didn't think that Sabra Davison was going to keep going that fast. But she kept skiing that pace, and I knew I couldn't. Pop. Shortly thereafter, Megan Killigrew and Stephi Crocker caught up then, and I skied with them for the next 20k. Early on, I noticed that my skis were running faster than theirs, and I felt pretty smug about this, anticipating downhill attacks and huge glide. But around 15k I started to notice that I really had to work the downhills to stay with them. Uphills were mostly fine, but it was painfully apparent on the downhills that I was getting dropped, and it was only a matter of time before I wouldn't be able to do another sprint at the end of a downhill to close the gap. My legs weren't burning ever, just sort of heavy, tired, hard to keep the turnover up.

That inevitable moment happened just after we came through the lap - I stood up to take a drink, and they were just gone. I tried to tell myself to just keep skiing, because 50km is a long time and anything can happen, but unfortunately, 50km is a long time. I had about 4km of being miserable, but then the sun came out, and the snow started to glaze, and because I had fluoros on, my skis sped up. I assume everyone else's skis sped up, too, but at least it was easier to ski. Another Dartmouth girl, pulling Katrina Howe, caught up then, and I skied with them for a couple more km, until near the top of a hill, Kat just skied away from us. Shortly thereafter, the other girl skied away from me, and my legs just had nothing to give. Not cramping, not bonking, just tired. Blah.

The stupid climb at 13k was stupidly painful, and my legs were not happy. Just everything was tired, my left calf was toasted, and that made it impossible to hold a good body position, so my quads and glutes were working harder than they had to, basically I was done. Too bad the race wasn't done. Thankfully, two V1-only masters caught up to me, so I skied with them through the rest of the stupid climb and the curvy long climb after the stupid climb. The last 3km loop was as insultingly long as ever, but I finally finished, and I took my 10minutes of misery/agony/whininess/disappointment before re-joining humanity.

I might have held on longer with better skis, but ultimately, I was just tired. Sigh. Rangeley defeats me, again. 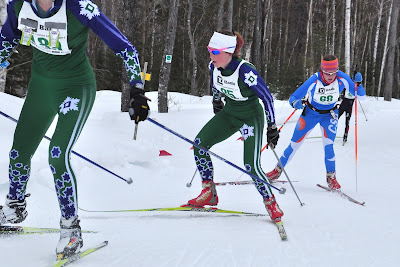 Luckily, thanks to overly-expensive waxes and getting to choose between differently-structured ski bases, you can end up with really fast skis in those sorts of conditions. I just made some bad choices =). Glad you got some skiing in!