One thing that some of the national orienteering team members are trying to do is to hold more training camps, especially those of the weekend variety in easily-accessible areas. The Western Connecticut folks held a training weekend while I was at Ski WOC, and this last weekend, CSU hosted a weekend, basically by compiling some of the already-existing options. Saturday everyone met up at Breakheart to run the "semi-permanent" course that I'd set for the month of April, and then gathered at Brendan's house to have lunch, and then run some sprints at Tufts on Brendan's new ISSOM sprint map there. Sunday, Ed and Ian were hosting a local meet at Rocky Woods, in Dover, so we all headed down there. The weather was awesome, so we had good turnouts. 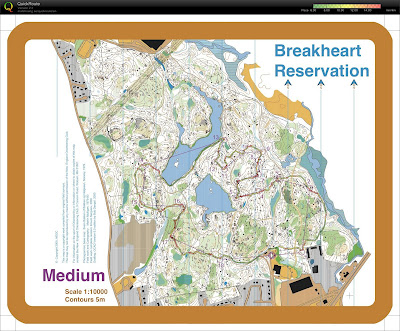 My route from Saturday's training at Breakheart - it felt so good to run in the woods! I guess I missed orienteering.

I missed Brendan's sprint in the afternoon because I had to go to the CSU junior end-of-season party, which was awesome. Those kids are great, and I got all sorts of warm fuzzies inside watching the seniors get their "athlete" certificates from Rob. *sniff*. The skiers had decided that they wanted to have an energy bar competition at the party, and a whole bunch of them came up with different recipes for energy bars, which we judged (the distinguished panel of judges was Jamie, Rob, myself, and Amie) based on taste, nutrition, and packageability/presentation. Although there were some that weren't bad, I can't believe I skipped dessert to eat energy bars. Even with just a bite from each one, that's a lot, and some of them were pretty bad. oof. 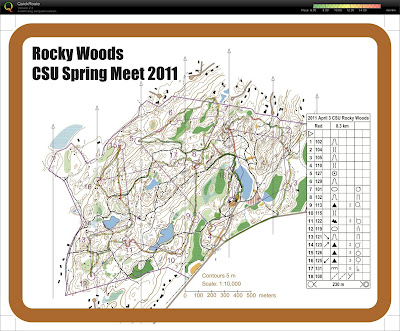 Sunday was CSU's local meet at Rocky Woods, and Ian and Ed did a great job with it, attracting 85 people. I ran the red course, which was 8.3km, pretty long for the first real orienteering race of the year, but Ian designed a fun course, and I didn't realize I'd been out there for so long. Things were pretty clean on the navigation front, just a couple bobbles, but I felt really in control of where I was going. Such a nice feeling! I ended up finishing pretty well - I managed to beat Ali, since she decided to spend an extra 9 minutes on #12, but Peter still got me. I think he's my nemesis this season, luckily he's old, so sometimes I can outrun him, but not on Sunday. Results for the red course with splits - I was the second woman, but Sam beat me by 19 minutes, so that actually wasn't that impressive. 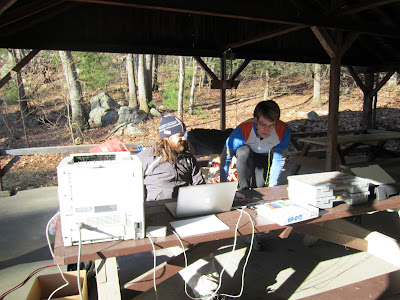 Ed and Ian running the show. 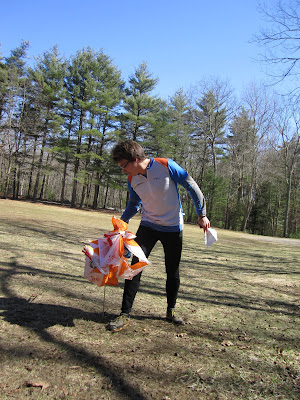 Ian decided to run the white course (easiest one) while picking up its controls, and he did it in 11 minutes - the previous first place person had taken 39 minutes. 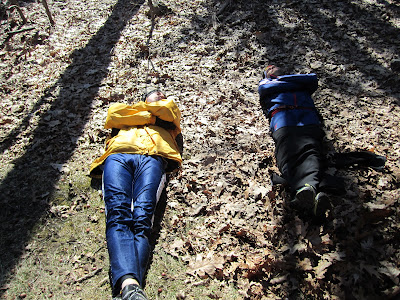 It was a sleepy, sunny, sort of day. Brendan and Ross took full advantage of the sunshine before heading out to pick up controls. 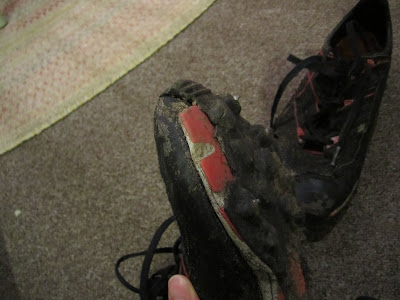 I also finally got some new orienteering shoes. My old shoes were starting to completely disintegrate, after 680 miles (yea training logs and OCD logging...) in the woods. I was impressed they lasted so long, and I had thought maybe I could get another season out of them, but I decided this weekend that enough is enough. And the new ones are shiny! 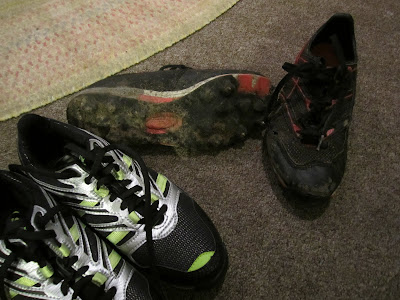 Nice shoes! I just got a new pair of running shoes - it's a good feeling.