The US team trials for the World Orienteering Championships (WOC) this summer took place last weekend in Carrollton, GA. This was also the 2012 US championships, so there was a pretty big crowd. Ed managed to get himself involved pretty early on doing radio controls (when a runner punches the control, it automagically gets radioed back to the announcer, good for intermediate splits) and electronic displays. Because all of this takes a good amount of gear, he drove down to Georgia, and miraculously, his truck made it down and back, in one piece! We won't talk about the four days of work it took to get the thing ready... Anyway, I decided that I may be crazy, but I ain't THAT crazy, so I took a plane with Ali and Becky, and off we went to explore the south. 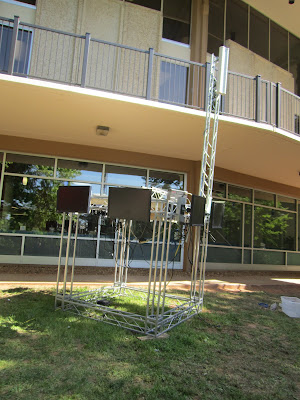 Ed's erector set of monitor displays, and the tower for the radio. 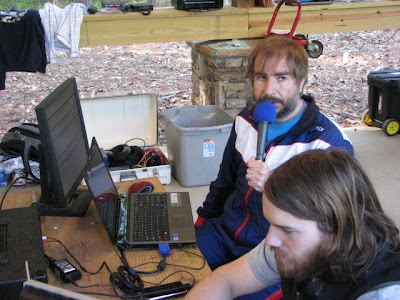 The tech guys - Ed and Vladimir doing their part to raise the profile of orienteering. It was pretty awesome having live, exciting, announcing, a good playlist, and instant results displays. The tech guys are looking a little rough around the edges, but they did an awesome job. 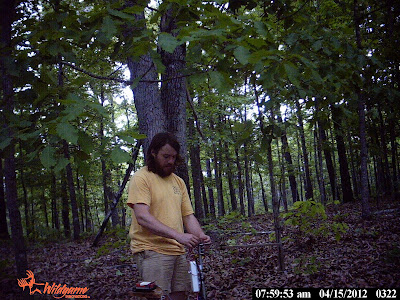 One of the photographers had a deer camera at the radio control, and there is a hilarious sequence of photos of Ed showing up to fix the radio.
The only way to make the plane ticket to Atlanta affordable was to fly out of JFK and back into BOS, and this necessitated taking the megabus from Amherst to NYC, which sort of worked, aside from the minor detail of the bus showing up an hour late. Christophe is inhabiting NY these days, so he met Ali and me at the bus stop and rode with us on the subway, just so I could see him for a bit. Someday, I'll actually visit NY... 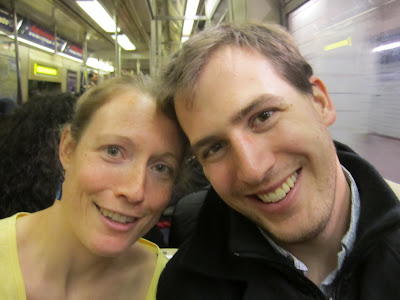 Sprint Race
The first race of the weekend was the sprint race, at West Georgia University. There was nothing too exciting about the map or the course, but it was perfectly adequate, if seriously on the long side. I started one minute behind Becky, and two minutes ahead of Ali, so I was hoping to see Becky and not see Ali. The beginning of the course I had to go a little slower, just to keep on top of my navigation, but by about halfway through the thinking was finished, and I could really open up and try to run fast. Given the temperature and the fact that it was just ski season like two weeks ago, this meant lots of wheezing on my part, but by control 16 I could see Becky, and I began to slowly close the gap. I ended up nearly catching her, but Ali nearly caught me - good enough for 2nd place! This is the best I've ever done on the national level in foot orienteering, so I was pretty pumped! 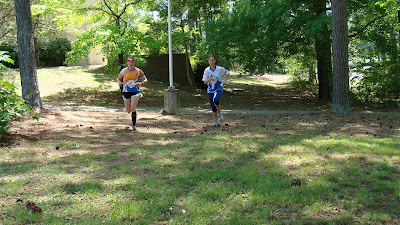 Running away from Angelica. 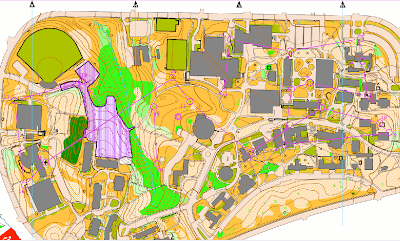 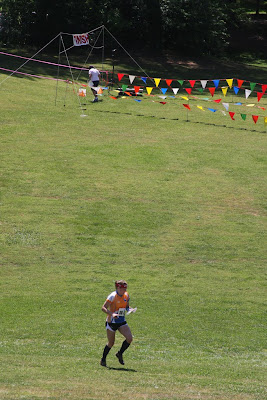 Lots of open, sunny, HOT fields to run across. And a fair bit of poison ivy, though I seem to have avoided it mostly. 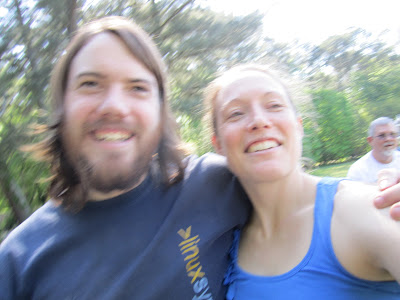 We were pretty happy after the first race - I'd run well, and Ed's equipment had run well. Also, it's hard not to be happy on the first day of summer weather. 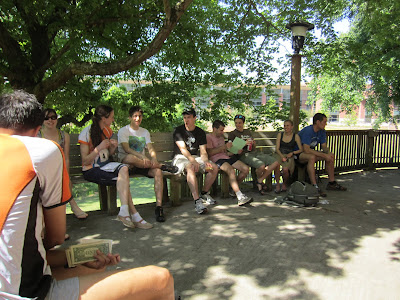 The main purpose of traveling to any of these meets is really just to hang out with our orienteering family. So much fun to see everyone all together!
Long Distance Race
The second day's race was at the Chattahoochee Bend state park, on the banks of the Chattahoochee river. Other than getting a pretty horrible country song about that river stuck in my head, we started to wonder if there were any alligators this far north, and spend a solid half hour looking up facts about alligators in Georgia. Supposedly, this was too far north to find any of them, but you never know. I'm glad I wasn't doing any swimming - if I used to be scared about sharks in swimming pools, I certainly wasn't getting into a river that connects to alligator waters! 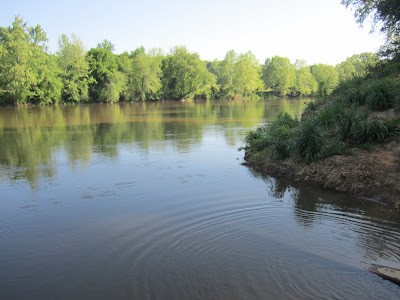 I didn't see any alligators, but maybe they were hiding.
Today I started three minutes behind Becky, with others ranging about at further intervals. It was supposed to be even hotter, and I worried a little about not being ready for the heat, but luckily the elites started early. The park was relatively flat, which meant for some fast running, and some of the early route choices took you on some loooooong trail runs. By #3 I'd caught up to Becky, who had caught up to Angelica, and we were running together for a few controls, until I'd run away from them by #8. By then, I was starting to feel the heat, despite taking water (and eating gummy bears) at each opportunity.
My original plan had been to speed up about halfway through, but unfortunately, the opposite scenario played out, and I got slower and slower. I think this was mostly related to some blisters on my feet; the dry dust was doing a number on my toes, and having painful feet means you're less focused on moving quickly and efficiently. I was navigating cleanly for nearly the entire race; I made a 50-second goof at the last control, and as I was relocating, in my head, I said, "this is it, you've just lost it". It was true - I ended up in fourth, 10 seconds out of third. 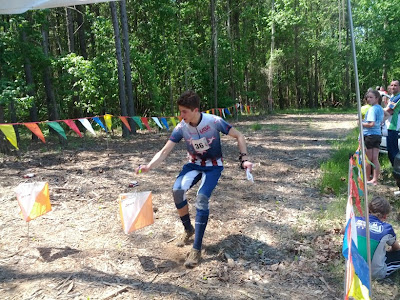 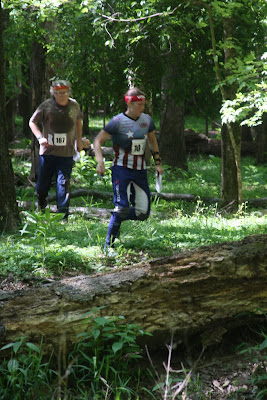 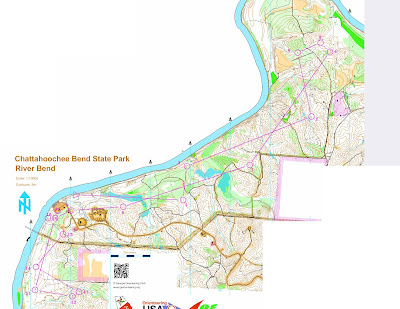 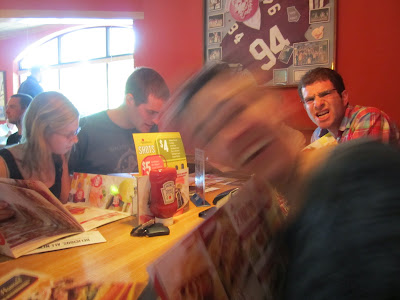 The evening was filled with much fun, more catching up among old friends. After two races for team trials, I was sitting comfortably in the third position, one point (out of ~290) behind Hannah, and about 20 points clear of Cristina. Unlike last year, the pressure was off for the last race. Doesn't mean I didn't still get nervous...
Middle distance race
I woke up to some aggressively tight calves, and nothing I did seemed to loosen them up. I told myself that speed wasn't as important in the middle distance, I just had to not mess up, but unfortunately, you still have to get to where you're going, even if you're going in the right direction. The terrain was hillier in this area, with more bare rock and big blobby rock formations, so that was cool, but again it wasn't the most inspired course I'd ever run. I started out pretty well, but made a few bobbles in the beginning, losing seconds here and there. I just couldn't go up the hills as smoothly as I'd have liked, but I felt like I was chugging along alright. 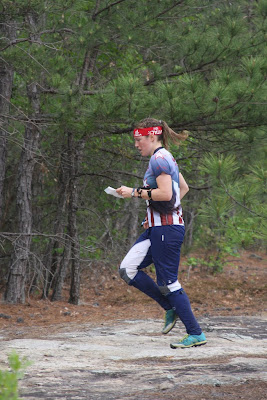 After the spectator control was the big mistake - I completely overran #17, losing two minutes just on that leg. When you're already not going fast, you can't blow that sort of time. Argh! I recovered somewhat, but this time I was 1:40 behind Hannah, in fourth again. A Canadian, Katarina, had taken 2nd place, but didn't count in the team ranking points. 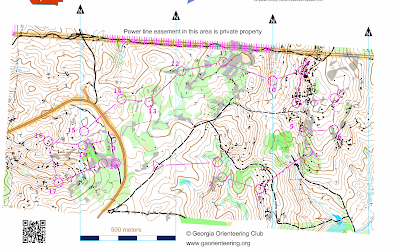 This is probably the most consistent set of championship races I've ever run, so that was really encouraging. I also qualified myself for the WOC team, so I'll be heading to Lausanne, Switzerland this July! It wasn't a huge surprise to qualify for the team, but you never know how well others have been training - all you can control are your own actions. I'm excited to get another stab at international competition, this is gonna be awesome! 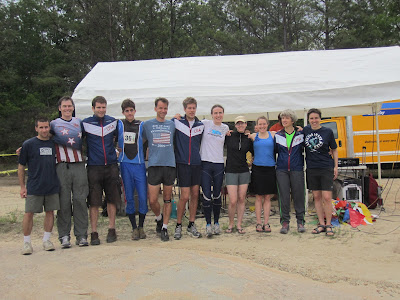 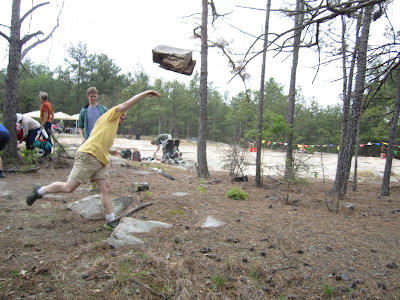 Other favorite photos from the weekend - the CSU log-throwing contest. The boys got really into this one. 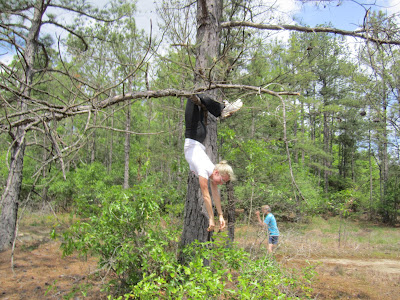 Ken was doing pullups on the tree branch, Kat turned monkey-like, but did it with grace. 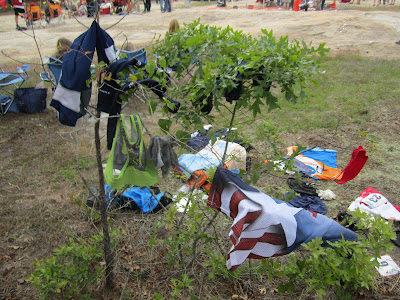 Clothing tree, drying out clothes before shoving them into bags... 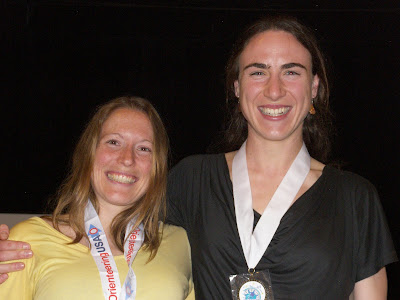 Look! I found an Aligator on the podium!
Results for the entire weekend.
Posted by Alex at 12:39 PM