Mt. Washington training is in full swing, and I hit up South Sugarloaf mountain on Wednesday, for some pain-laced hill climbing.  I decided to push my road bike on the uphills and coast down, mostly to shorten the recovery but also to reduce the overall mileage and make it easier on my knees.  I'm generally a good downhill runner, but that's when I can let it flow, and just like on a bike, you build momentum when you're running.  Unlike on a bike, the faster you get going, the harder you have to work - no coasting!  Pushing the bike was not easy, and definitely made my right arm pretty tired, but I think it was worth the effort.  The last time up I ditched the bicycle, and that made thing considerably faster, especially on the second, steeper half.  Information to file away for later.  I probably should have done a fifth hill, but I was getting hungry and it was dinnertime, and that's enough of a reason to quit for me.  Uh oh. 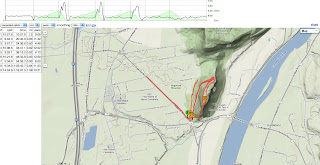 Thursday was the first park-orienteering race of the season, at Danehy park in Cambridge.  I managed to get there in time for a decent warmup, but I quickly noticed that my legs were feeling the effort from wednesday's hills.  My calves especially were quite knotted, and I guessed that this would play a role in my top end speed for the park-o. 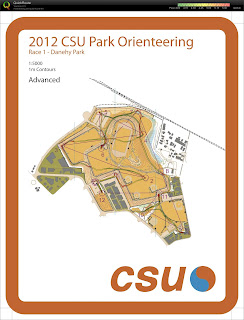 I ended up having a pretty good run, from a navigation standpoint, but I just couldn't get going with the speed.  I missed one route choice, from 8-9; should have gone around on the road, but I never even saw it.  This park is not the most interesting place to orienteer, as it's wide open and there is no good way to make things tricksy.  Larry did come up with some interesting route choices, at least.  My effort was good enough for fourth, but nearly three minutes behind Ian!  Must. get. faster.

Next week I'll probably hit the track instead of the mountain, since my long run will be during the Billygoat, which has plenty of hills, that I'll be doing plenty hard.  According to Jess, who knows everything there is to know about running, threshold work is just as important as uphill work, so I'm going to believe her, and only run long hills every other week.  Hopefully this works.
Posted by Alex at 9:15 PM