I love cross country races.  I feel like that's running at its realest - none of this pansy road stuff, you have lumps and bumps and mud and hills and rocks in your way, and even on a well-packed trail like the Northampton races, I still feel more alive, more man-against-nature-esque, than on a road.  Running is sport at its purest.  Racing is sport at its simplest.  I love it.  Orienteering is great and all, but it's missing the simplicity of you versus the clock and the ground beneath your feet.  Which of course is why I love orienteering - the subtleties and complexities of fast navigation and smooth woods running are yet more challenges I find exhilarating.  But pure running has its place.


Ali convinced me that running the 5k this week would be more fun than doing a track workout; not like that took a ton of convincing work on her part.  Duh.  We showed up and it's blustery and chilly, a proper April day, not like these ridiculous sunny, warm, mild days we've been having.  That beautiful tank top weather in March was warm enough to count as extreme weather.  Our world as we know it is falling to pieces.  Anyway, chilly weather makes good running weather, though a low turnout for the race meant not much of a chance to draft people when facing the wind. 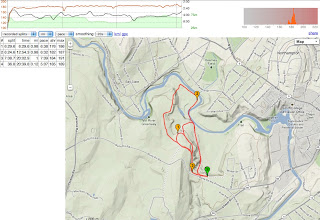 The race starts with a downhill, which meant I was way too far forward in the pack; I'm good at downhills, but not much else.  It means I spend the first mile getting passed by people, and letting them go.  But it's worth that rush of flying down a hill!  Going up the first hill, a little kid, maybe 10 years old, passed me, and that was pretty depressing.  I started hoping he would fade soon.  Kelsey Allen, long time ski rival and better runner than me, passed me too.  I tried following her pace for a while, but couldn't comfortably match her stride, so backed off some more.  By the second mile, I'd passed the little kid, but I was starting to feel the pain of racing.  My breathing was still steady and controlled, but the overall tiredness was seeping in, legs were starting to hurt and my shoulders kept trying to ride up into my ears.  Relax, relax, light and quick, no tension, lean into the wind, roll off the feet.  Smooth and controlled, I rounded that corner in the field and hit The Hill.

This hill isn't even all that large, and has firmly packed dirt as a base, but when you're seeing it at two and a quarter miles in to a race, it looms in front of you like some huge unsurpassable psychological barrier, taunting you with its steepness, in your face and all too soon in your legs.  Going up it isn't even the hard part.  I let my legs flow, falling up the hill and using my arms, I'm barely breathing any harder. It's short enough that you don't feel its poison until you crest, and realize, too late, that your legs are wobbly and soaked through with lactic acid, and as the terrain continues to slope gradually upward, relentless, the race becomes a mental challenge.  By this point the breathing is harder, two steps in and one step out, and I can see Kelsey and a guy up ahead - the guy seems to be faltering, and I wonder if I can be strong enough to catch him on the flats before we head down to the finish.  It's hard to keep focused when facing the wind alone, breath after ragged breath, smooth form gone, trying to will my way to the finish line, because my legs are now fighting against me, wanting to stop.  5k races HURT.

I couldn't catch the guy, and my legs are trashed enough as I descend the hill to the finish that despite the encouragement from Phil and Ed, I can't speed up too much, worried my legs will just collapse instead of catching me and throwing me forward.  There is nothing sweeter than crossing the finish line of a race, and stopping.  Maybe that's why I do it.  For the relief of coming to a stop after pushing myself beyond any comfortable limit.  I ended up running a 20:40, which is a minute off my PR, but that PR was set on a road, back in December, and this is a 20s PR for this course.  Satisfying, and a relief to know that I do have some running form right now.  Maybe by the end of the summer I'll break 20 on this course, but that may be a stretch.