I made it home on Thursday, after a few days visiting family in London.  London was buzzing, getting ready for the Olympics.  On a related note, it's just plain idiotic that NBC doesn't offer a pay-per-view option for streaming the Olympics.  What about poor suckers like us who don't have cable?  Grumble.  I would pay money to watch the olympics! But I don't want cable. 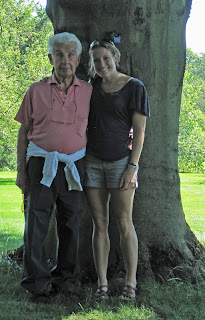 Anyway, I've had time to reflect on my performances at WOC.  It wasn't ideal.  It never is - you can't rely on having everything come together at the perfect moment, all you can rely on is your training, your mental state, your mantras, and hope that is enough for a normal day to produce an amazing result.  I should be proud that I had one good race, but I was left wanting more.  Maybe I'll never be truly satisfied, and that's why I keep racing.  I'm thinking ahead now to next year, in Finland, where the terrain will require leg strength rather than leg speed, and the challenges will be technical.  I hope.  I'm excited.  I believe, somewhere deep inside, that I actually have the potential in this sport to outperform my genetics.  (love ya, mom!)

The International Orienteering Federation (IOF) had a meeting while we were racing, and agreed that in the future, they are going to eliminate the qualification races.  I guess this is done in order to make it easier for smaller (poorer) countries to host WOC.  Of course, this leaves open the question of how to choose who gets to run in the finals.  Right now, the proposal stands at allowing one runner from each country, plus others based on past WOC results and some regional champions.  And then a 3-person relay, although for many runners, who get limited support from their foundations to begin with, it isn't enough to travel to WOC just to run the relay.  What this means for the US women's team is that I'll probably never run WOC again, since right now, Ali and Sam would be fighting over our spot, and neither performed well enough to grant us a second spot.  And by the time they want to retire, hopefully there is a faster young'n coming through the pipeline, for our country's sake.  The proposal doesn't take effect until 2017, but the organizers between now and then could adopt it if they wanted, and there is a rumor that 2014 and 2015 have already decided to do it that way.  What this means for me, is that next year is likely the last chance I get at trying to race my way into the finals, fair and square.


There are plenty of other huge, multi-day, European orienteering events I want to race in, but the World Championships obviously has its own draw.  So, I've done some thinking about how to get better at this sport.  I've come a long ways, but I still have some obvious weaknesses, that I plan to address in the next few months, ideally before North Americans.  I have a whole bunch of process goals, and thankfully none of them interfere too much (I hope) with all my other disparate goals in life.  This is a manageable project!  Here goes! 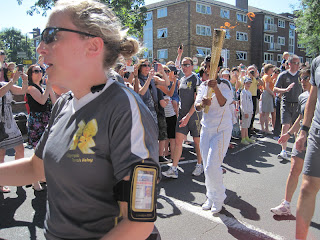 Did I mention we saw the torch relay, completely by accident?!?  It was shiny, and burning.  oooooo.
Posted by Alex at 7:33 PM