I came in to this year's World Championships far more prepared than last year.  I'd added another 2000 controls, 130 hours in terrain, 550 hours of physical training, and had just posted a PR in the 5k on the Northampton course (though not yet a lifetime PR.  That'll take a flat course).  Last year, I was a rookie, now I had some idea of what to expect.  In an ideal world, if everything went perfectly, I thought I had a shot at making one of the finals.  My other big goal was to be selected for the relay team.  I didn't make either of those goals, but somehow, I feel like I'm still coming away from these championships successful, or at the very least, hungry.

The first race for me was the long distance qualification.  The terrain was very different than anything I've experienced - I'm used to thick, rocky, slow terrain, where you can't move at full speed through the forest.  Although this map had plenty of nasty prickly stuff on it, you could move FAST if you avoided it.  All the running on hard-packed trails aggravated my achilles tendonitis badly, enough that by about halfway through it was a distraction from my navigation.  Amazing how hard it is to run fast when you're thinking about some painful body part.  I'd also paced myself poorly, starting too fast, and it was a struggle to push to the end.  I felt like I'd just done a 15k road race, and was completely and utterly wiped.  As it should be!  Although I raced a relatively clean race, I clearly didn't have the leg speed to compete with the top, and managed to outrun my brain once or twice - I estimate I lost maybe 6 minutes to errors.  That's a lot of time over an hour race.  A perfect race would have gotten me closer to the top 15, but I'm not quite there.  Yet. The map from the Long qualification race. 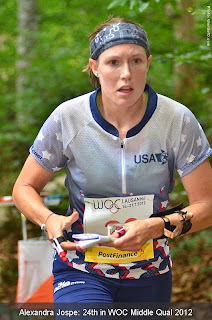 The following day was the qualification for the middle distance.  A little desperate to make my achilles hurt less, I spent a while looking up youtube videos of how to use kinesio tape to help alleviate achilles pain.  I found two scientific studies online, one of which says kinesio tape doesn't do squat, the other saying it totally works.  I decided to believe the one that told me it worked, and taped up my heel and calf.  Combined with painkillers, my heel was fine through the race, and I left the tape on for a few days.  I now declare it to be magic tape, as my achilles pain faded the longer I wore the tape, despite continuing to run hard races.  I will have to acquire some of this magic tape at home - nothing better than a crutch to let you train more than you should on an injury!  (I'm being sarcastic.  I hope).

So, leg all taped up in pretty colors, I prepared for the middle distance.  More technical terrain than the long, with more rocks and low-visibility forests, I was quite excited!  Too excited.  This race was a disaster.  I started well, but the crucial mistake came on the way to #2, when I tried to compensate for a hesitant start by running faster, but did it in the wrong direction, and proceeded to make a massive mistake, compounding the mistake with a panicked, idiotic recovery.  Luckily, I was able to put that control behind me and out of my mind, and followed it with a string of really good controls.  And then I made another mistake, this time with a parallel error.  Recovered, and then another mistake, bad compass work from my attackpoint.  My spirit was broken, by then.  There was no more point lying to myself; one mistake maybe you can recover from, three mistakes, plus a race full of nervous bobbles, there is no coming back.  It was disappointing to have such a disaster of a race, one of the worst races I've had in at least a year, but I know you can't necessarily expect to have your best races on the day it counts.  Not like that knowledge lessens the sting. 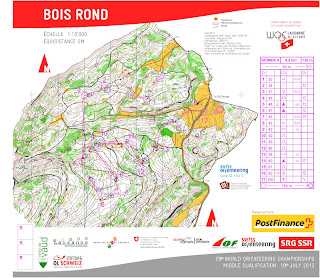 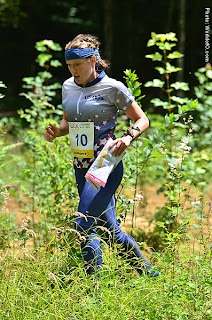 In to the control... 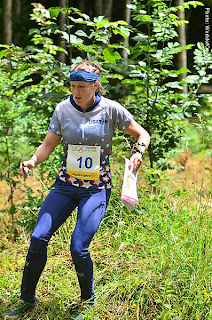 punch!  (would be such a better photo if the control were in the frame) 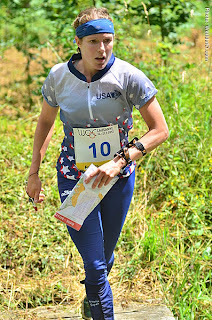 With no finals to run, and having taken myself out of the relay with my inconsistency, the week became more of a training week for me.  The public spectator races being run in conjunction with WOC were open to all, and I threw myself into the orienteering as though that could somehow make my past races better.  Running in the elite class of the open races, the competition was still stiff!  Spectating the WOC final races was also thrilling, and the relay day was the ultimate excitement, when Ali finished her first leg in 3rd place!  Sandra did a great job on the second leg, and I was happy to see her there in her last WOC.  But I look forward to the day that I can run at a level to keep our relay up in the lead pack!  I know what I need to do, and I'll keep hammering at those process goals and see where next year can bring me.  Now on to the next adventure!
Posted by Alex at 9:08 AM