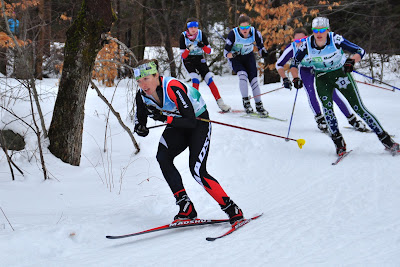 Last weekend was the second round of Eastern Cups, held at Mt. Top Inn and Resort, in Chittenden VT. The last time I'd been here was last spring for Eastern Highschools, and there was barely any snow, just a manmade loop going around a field and over a hill.  Unfortunately, we his the January thaw just in time for the race, and by Sunday, we were down to that manmade loop again.  Ski racing in New England is a dying sport; thank god for snow guns, which only perpetuate the problem, but hey, at least they let us partake in this fuel-intensive selfish sport.

I had to be in Boston on Friday night, so drove up at the crack o' dawn on Saturday.  Not having planned ahead too well, breakfast was from a gas station, so poptarts and coffee got me started for the day, breakfast of champions.  The whole day was crap from the fueling standpoint, and by the time 4pm rolled around I was massively dehydrated and quite depleted, but at least I got through day 1.  I did a course tour with Kathy and the J1 and J2 girls, and all too soon it was time to race the qualifier.  At least I got in one hot lap, but I think I would have liked to have been more warmed up.  Oh well, good enough to qualify 2nd, behind Cate, one of my J1s, by 0.2s.  Oooh, that was close!

Then on to the heats! I had Rebecca, another of my J1s, 29th qualifier, in my quarterfinal, and the plan was to play the lucky loser game (heats aren't timed, so lucky loser is based on bib #), and try to get Rebecca in to the semis by possibly taking 3rd, if she wasn't in the top 2. Unfortunately, she got boxed out in the start, and couldn't move up through the pack, so that plan didn't quite work. I'd started fast, and it is nice to be able to just accelerate past people if you feel like it. Into the downhill I discovered that my new Madshus skis were AWESOME - you'd think that if you lead into the downhill, someone would slingshot past (the plan was for Rebecca to slingshot past me, and then we'd block on the way back up the hill to the finish, going her speed), but instead I opened a gap by tucking. Skiers caught up on the uphill since I was dogging it, looking around trying to find Rebecca, but once I found she wasn't in the top 4, I started skiing hard again, to make sure I advanced. 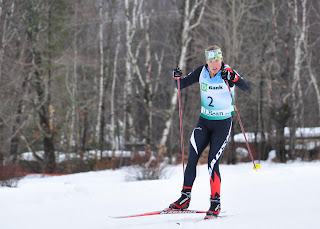 Photo credit Jamie Doucett.  There's a pack of girls behind me... you just can't see them.

Semifinals was me and a bunch of UNH/Dartmouth girls. I took it out fast again, and Elizabeth Izzo of UNH decided to pass on the high point. I'm cool with drafting, so tucked in behind her, and our skis were good enough to gap the rest of the pack by the bottom of the downhill, where I slingshotted around her, and then led the uphill at a comfortable pace, listening to the battles raging behind me. 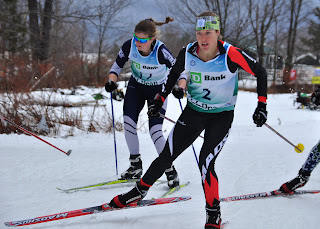 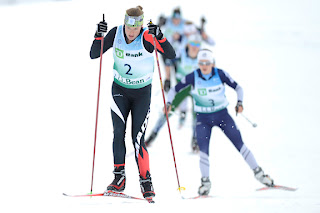 Into the A final, and Cate and I were the only CSU gals in it. We decided that we had been enjoying the win-from-the-front strategies we'd both been employing, mostly thanks to rocket skis (Toko jetstream yellow and a rill, not sure which one, on my Madshus soft track skis). I was a split second slow off the line, but managed to put myself into 3rd easily enough once the tracks ended. Maddy Pfeifer (GMVS) took the lead, and both Cate and I were happy to tuck in. Coming down the hill, I slingshotted around Cate, and got most of the way around Maddy, carrying momentum nicely into the uphill. But then I did something, and I'm still not sure what, and basically put my ski somewhere into Maddy's person and that caused me to trip and spin 180 degrees, on my elbows and knees. Cate and Maddy got by fine, and thankfully Elizabeth slowed to look at the carnage, so by the time I picked myself up, I could hop in behind her. Brooke and Natalie had gotten gapped on the downhill, and were only just catching up, so I was still in 4th. Bummer. I sorta resigned myself to that, but then realized I could go faster, so passed Elizabeth, and was closing on Cate, but Brooke was closing on me, and woulda got me if the course were longer. Damn those uphill finishes, I ski better on the downhills. Anyway, ended up 3rd, so still on the podium, though not the top step.  Not bad for a day's work! 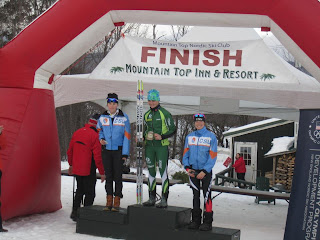 Sunday dawned way too early, and I was Tired.  Damn.  (I may have been up too late watching Miss America.  They were doing a talent show, tap dancing and baton twirling and stuff, and I was like, hey, I have a talent!  I can gallop when I crawl! I should be on Miss America!  Kathy didn't agree).  It was going to be a slog of a day, and I sort of hoped that this sluggishness that I was feeling while doing the course tour with J2s and ladies would go away, but it just got worse.  Saturday ran me out of oomph, and I wasn't recovered yet.  I had an early start, and after testing my skis out, off I went.  The mistake I made today was not testing my harries (classic skis that take no wax, instead they're really soft, and the base in the kick zone is super roughed-up with sand paper).  The snow was really draggy and slow, and the people using harries or zeroes reported much better glide, and equivalent kick.  Oops.  Anyway, I had some issues kicking on the uphills, and I had some issues gliding on the flats and downhills, but really, the trouble was the skier, not the skis.  The skier was tired, unmotivated, and had the wrong attitude.  The result reflected my attitude, and I've learned my lesson - stay fueled on sprint days.

But overall, Saturday was a good day, and CSU had some really great performances, across the board, so I was pretty pumped.  Can't wait for the next Eastern Cup!
Posted by Alex at 10:20 AM