Saturday was the one-day NENSA club championships, at the Jackson 30k, so a whole slew of CSU masters headed north to fight for the title. I drove up with Terry McNatt, and we spent the night with Greg Werner's family, in a condo barely five minutes away from the race start, which was great. It was chilly at the start, 6F, but sunny and no wind, and it warmed to 15 or so by the end, with rock solid tracks so deep you could lose sight of your feet down there, and no ice, just firm cold snow. My favorite! Only thing better in terms of rollerski kick would have been a covered klister race, and it's a helluva lot easier to cork on some blue wax than to properly cover klister, so I was happy. I started well, budging in front of 3/4 of the field so that I could line up with the other ladies who were up near the front. I marked the other girls visually, to make sure I didn't lose them when the gun went off, and I recognized quite a few of them. We started out, and Robyn Anderson took off at a fast clip, passing guys right and left. I decided that the only real option here was to go with her, so did some between-tracks skiing to close the gap, and we soon left the other women behind us, as the field spread out and we headed into the first climb, up to Eagle Mt. House. The course would then take three laps of the wave, and then descend back to the lower golf course and the touring center.

Heading up the Yodel trail the first time, I quickly discovered that I sure wasn't racing on fresh legs, despite the two easy days preceding Saturday. My quads were unhappy with supporting my weight, and my arms felt heavy. Ugh. Robyn took the lead again, and I hung on, hoping things would turn around after my hands and feet warmed up. Into the upper golf course, and she kept hammering, catching up to another group of guys on the double pole. I noticed that as we were double poling, she had a much higher tempo, for not much effect, so I figured maybe I could make a break on the flats a few laps down the road. I was feeling better now that I wasn't striding, but double poling isn't my strength this season, thanks to the nagging elbow tendonitis, and there's only so long that good technique and power application will get me by.

We headed into the woods and started climbing, and the pace still felt fast - more like 10k or 15k pace than 30k pace. Luckily, Robyn was working hard, too, and I had the feeling one of us would crack. I hoped it wouldn't be me. We made contact with Rob Bradlee's group as we headed uphill, and it was nice to have a friendly pack of masters to race with. Down the wave, what a great trail! It took some guts to stay in the tracks, but you had the trust them, they were deep and solid and would sling your skis around the corners with maximum speed. I avoided getting air over the bump, and fully enjoyed the ride down that hill. wheeee!

Back into the flats, and I put in a bit of a surge to stay with Rob's pack, who were all pulling away. I wasn't a huge fan of this part of the course, since the corners were all tracked, but too tight for your skis to want to stay in the tracks. Not so much fun. In my efforts to keep up with Rob, Robyn dropped back a bit, and I headed into the second lap with a bit of a gap. I figured it was worth the effort to maintain this gap, so put forth a good effort up the climb, and looking back near the top of the hill in the fields, I didn't see her anymore. Go time! I figured if I kept pace with the masters ahead of me, I wouldn't drop back too much, and hopefully no ladies would catch up to me. I was starting to feel better, and truly enjoying the perfect snow conditions, just thinking about how much fun it was to classic ski in conditions like this on a gorgeous day. Love it!

Third lap I started to tire a bit - on the first uphill into the woods, I began herringboning, and immediately planted my pole between my legs, nearly snapping it as I felt down. D'oh! Rob's group got a gap then, and it took a bit of mental oomph to get going back to race effort after the fall. I was very glad to be done with the climbing when I reached the top of those damn hills, and now that we were lapping people, there was a fair bit of dodge-the-tourer going on. I think I can safely say that I didn't cause anyone to fall, and I gave everyone I passed an encouraging cheer. Onto the flats, and a Bethel guy, Ian, caught up to me. Despite some exhausted arms (what do you mean your arms get tired in double poling marathons if you don't train double pole?), I did my best to hang with him, mostly out of fear that someone else of the female persuasion would catch up if I dropped back. We came screaming down the Yodel, and double poled along those final flats, but I couldn't close the gap, and he beat me. It was good enough, though, and I won the women's race! Sweet! 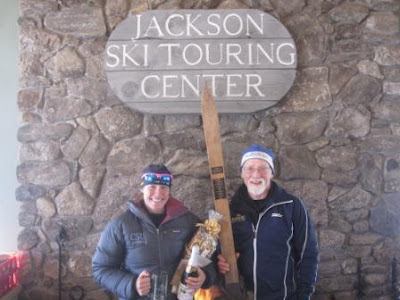