The last weekend of Eastern Cups just went down, and these were the last races to choose the New England Junior National team. We had quite a few kids who are in a fine position, leading their respective age classes, definitely going to Fairbanks, but we had just as large a number of kids who were "on the bubble". These are the nailbiter races, these kids are the ones for whom a few points in one direction or the other make all the difference. Emotions were high, this weekend. 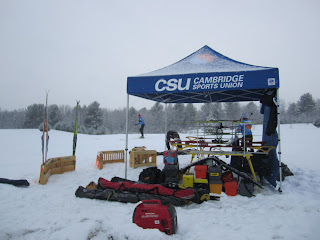 The quarry rd courses were awesome - very physical, though none of the hills were all that steep, they were relentless. We also had blinding blizzard conditions, and I was a little worried the smaller juniors would get blown away. 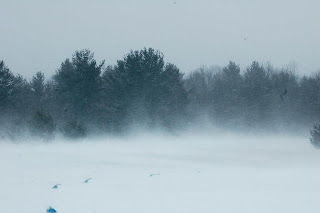 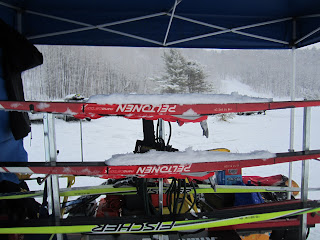 What do you mean, waxing at 30F and falling snow is tricky? 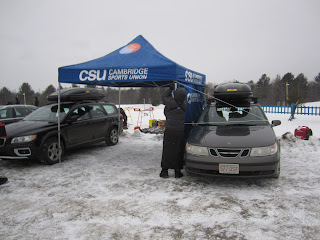 Day 2, we got smart with the tent, and lashed it to some cars. 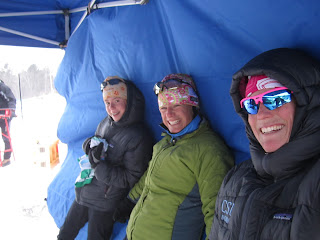 Leah, Kathy and I hiding from the wind

The J2 girls race went off first, and I was very excited to see Leah right up with Julia and Katharine, and Sonya, the bubble girl in that class, right with them! Because of the poorly-labeled finish zone, Julia, Leah, and Katharine all went down the lap lane and had to turn around, bringing them right back to Sonya, who nipped Katharine to sweep the podium with CSU colors. Not a great turn of events, but mistakes happen every once in a while, and in this case, it was in our favor. The next race was the J2 boys, and Gavin continued his strong showing in 3rd, while Lewis took a fall, but still came in 5th. Unfortunately, one of his rival bubble kids from a different team snuck ahead of him, getting better points for the day. Eep! 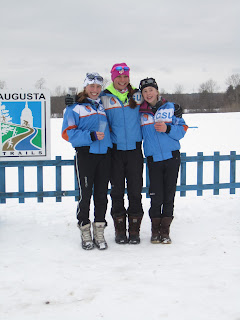 The mass start races for the J1s and older were next. Because this race was only lightly attended by college skiers and professionals, I got the #2 start spot, right near the front of the chevron. I had planned on using my hairies (skis with no wax, only a very roughed-up base, perfect for when there is falling snow around freezing), but the tracks were glazing a bit too much, and there was a lull in the snowstorm, so I was nervous. Luckily, one of my J1s, Zoe, had decided not to race, so lent me her zeroes (a ski like a hairy ski, only the base has a special material in the kick zone, giving it a slightly wider range of conditions where it'll work). Zoe's skis worked much better in the tracks, so I went with them, not having quite enough time to put the wax we knew was sort of working onto my waxable skis to test those out.

The start was clean near the front, and Cate (one of my J1s) and Heidi (J1 from GMVS) took the front, at a comfortable pace. A Dartmouth girl tried to make a move at the low point of the course, and going with her, I felt like I was going too hard, so I backed off and let a large number of people surge past me. This meant negotiating some of the downhill corners before the relentless climb in a pack, and a UNH girl kept attempting to put me in a ditch, but she didn't know who she was messing with. We started up the relentless climb, and this was just running, not skiing, no arms needed, so I moved up from what felt like the back of the entire pack to the front of the chase pack, trailing behind the lead pack of Cate, Heidi, UNH girl, and two Hannahs, one from Craftsbury and one from Proctor. Luckily, I made a move at the top of the downhill with all the corners, and Dartmouth girl who I'd moved past was bad enough at downhills that clearly her snowplow blocked the chase pack from following me, and I made contact with the lead pack by the bottom of the hill.

Around the stadium loop, and the pace felt quite comfortable. I saw no need to push it faster, as the closer everyone finished to the front, the better points my bubble kids would get. But the snow had truly stopped falling at this point, and I discovered that I no longer had any kick in the tracks. The tracks were considerably faster than the fresh snow out of the tracks, but I don't have the arm strength right now to force a classic kick when there isn't any to have, so by the low point of the course, I resorted to running/jogging out of the tracks, and that just wasn't very fast. At the bottom of the relentless climb I could see that Hannah from Craftsbury was also popped from the lead group, so I made an effort to catch her, but only made it within 7 seconds of her. Oh well, it was good enough, and felt good for the first real hard effort since catching at cold at Trapps two weeks ago. My bubble kids skied pretty well, too, so that was good. 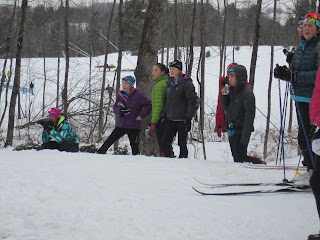 Spectators on one of the awesome sketchy downhill corners 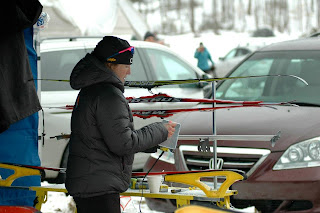 Prepping skis for the next day - you mean I was supposed to do that at home?

Sunday was just as windy and snowy, but colder, because we haven't really had enough real winter yet. Just a 5k skate, and I was excited to just hammer up that hill. Unfortunately, my feet got really cold warming up, and instead of changing socks and taking my boots off to warm up my feet, I just went with it. This meant that my feet fell asleep and my shins cramped up, and because of that I had no balance, as evidenced by this sad photo of my attempt at V2. 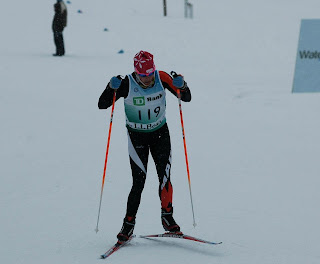 There were even more nonstarters in the field today, but I started 15s ahead of Cate, which meant I was running scared. She made short work of me on the initial flats as I bobbled around wondering why I couldn't ride a ski, and had caught me by 2k. Damn. Now just hang on. I stuck to her up the sustained climb, and it was certainly work, but I was starting to regain some feeling in my feet, and V1 is just a bit easier for the balance. I could see my 30s girl, from Dartmouth, and Rebecca, one of my juniors who'd started 45s up on me, ahead on the hill, but people look closer when you're climbing. It was nice to just follow Cate up the hill, no pressure to try and figure out your own pace, and I didn't really feel the need to redline it just to pass her, since someone had just given her a split that she was the race leader. At the top, she gained a 1-2s gap on me, which I'm fine with; I'd much rather have my space to play on twisty downhills, and I just couldn't V2 fast. Arms! Unfortunately, I caught her quickly on the downhill, and should have passed, but didn't want to do something sketchy and cause her to crash. Then she snowplowed on the sketchy icy corner with the fence, and I was kicking myself for not getting past her before that. Grr.

Short uphill, and we zoom past Dartmouth girl, hammer over the hill and into the next fun turns. They're good - you can step them all, and they make the course more interesting than just a straight shot down. At the bottom, carrying tons of speed into the final climb in the woods, I'm next to Cate and passing her, but we're coming up on Rebecca, and Rebecca is on the bubble for JNs, so I really don't want to mess up her race, so I told Cate to lead, and stood up to get behind Rebecca, at which point I start yelling at her to go with Cate. She does, thankfully, and we're more or less together down into the stadium, though Cate's now gotten a gap. I get around Rebecca at the bottom of the hill, and make up a ton of time on Cate floundering up that last hill in the deep snow drifts, then pathetically wish I had arm strength as I try to V2 finish hard.

I was fine with what I did out there - this race mattered to both those girls, and passing and being passed takes time for both people. On a short course, every second counts, and I think yelling at Rebecca kicked her into another gear and gave her quite a few seconds. It is frustrating to be closing a gap at the end when you know you could have been on the other end of that, opening the gap, but missing the podium by 0.3s meant I could go home early through the blizzard. 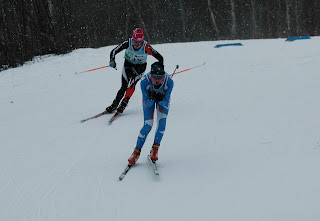 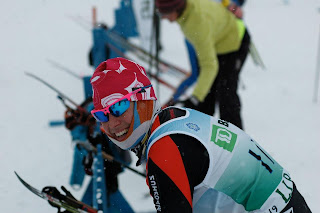 Junior nationals points won't be posted until this afternoon, so there's a bit of nailbiting going on, but all my skiers really skied great, regardless of whether or not they made the team. And if they don't make the Junior Nationals team, then I get them at the Eastern Highschool Champs!