Last weekend, I stood on the startline of the biggest ski race in America - the American Birkebeiner. 4000 people finished the skate 50k, 2000 in the classic 50k, 2300 in the Korteloppet (half-distance) races, and another 400 in the Prince Haakon (12km) races. That's a lot of people! I signed up for the skate race, because one of my life goals is a top 15 at the Birkie, and last time I did this race, I was 16th. This year, I'm in the best shape of my life, and have been skiing pretty well, feeling pretty good, and I'm on some wicked fast boards from Madshus. Gonna be a good one! The timing for this race worked out well, too, as it's the weekend before I fly to Kazakhstan for the ski orienteering World Championships, so fits right into the peaking schedule. I was pumped, confident and ready.

Fast forward to race day morning, and similar to last year, I did not have enough time to warm up. I got about six minutes of running, enough to get my hands warm, but not quite enough to get to the feet or legs. Next time I do this race, I'll just rent my own car - I think I've learned my lesson that you can't rely on others for race morning transport when they start hours later. Anyway, the first few km are pretty flat, so I figured I'd start easy, let myself warm up, and then start to move up on the powerlines hills. There was an inch or two of light fluffy snow on top of hard-packed corduroy for those first two km, so I was totally fine with hanging out in the mid-pack, letting others smoosh down the slower new snow for me. I was happy that the base under the new fluff was so hard; I have a hole in my ski quiver when it comes to soft powder skate skis, so the skis I was on were quite speedy, but a bit stiff, hence my relief at having a firm base to push off of. 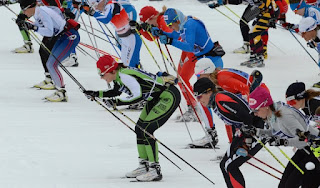 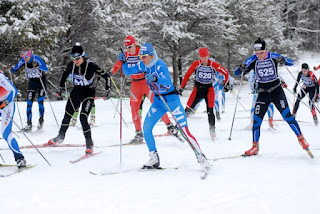 (You can see me fuzzily behind these people, in the Madshus suit).

Under the powerlines, I started to speed up, moving with a few masters ladies towards the front, which was already spreading out. But I quickly discovered that today was one of those days where skiing just feels like hard work. Nordic skiing isn't easy, I mean, you need to have the lungs of a racehorse and thighs of a cheetah to be any good at it, but some days, it just feels harder than others, and apparently today was one of those days. Damn. This realization that I'd brought the mental game but not the physical one was a downer, but I figured I'd just get tough, and maybe my legs would come around later in the race. I was working hard up those first hills, and the race was separating itself out, looked like this year I wouldn't be skiing with the lead pack at all. One of the masters ladies picked it up another notch, and I couldn't go with her, just put my head down and got my sustainable suffer on, waiting for the hills to end. 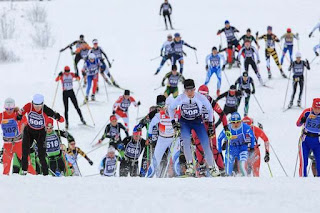 Eventually, we made that left turn into the woods, around 6km, and the rollers began. I could see two women dangling ahead of me, and there were a few behind me, so I pulled the train for a couple k until we caught up to the GearWest skier, Jan Guenther. She may be in her 50s, but she's a fast racer, and she latched on to our train. There was another woman ahead of us in blue, going about the same speed, so I settled into a comfortable pace, not too worried about catching her, knowing I had a pack to work with. There are some seriously steep little climbs in this race, and that was when I'd notice the true tiredness in my body, but for the flats and transitions, I was fine. The blue woman's teammate took the front of the pack somewhere in there, and upped the pace, skiing a slower tempo but higher speed than I'd been doing, and I found it was a struggle to hang on going up hills. But, skiing with this pack would be way more enjoyable than slogging it out alone, and I was recovering on the downhills, so it was definitely worth the effort to keep up. Before the big climb at 11km, we caught blue woman #1, Mary Beth Tuttle, another speedy midwestern master. We were down to five, now, Megan, Mary Beth, Jan, Kathleen (blue woman #2) and myself. 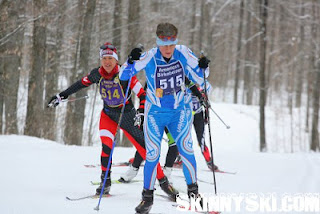 You can see my left foot, swinging out from behind the paceline. 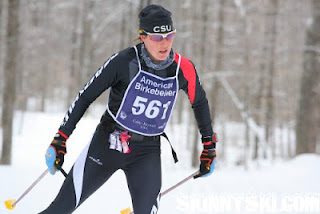 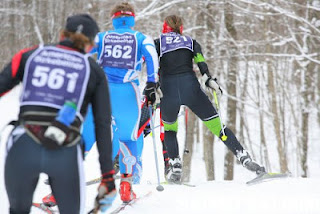 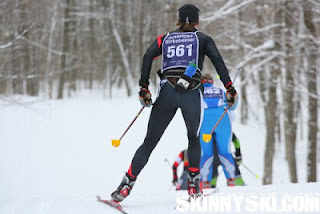 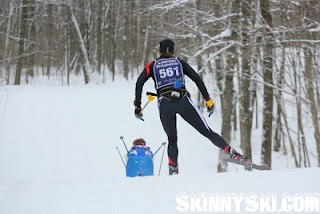 The climb to OO I thought I might lose them, but hung tough, and got through the feed in front this time. Unfortunately, after OO, the snow changed, and got waaay softer. I guess maybe they groomed that half later in the morning, and it hadn't set up as hard. I knew I was in trouble then, because with every push-off, my skis were digging into the snow, rather than riding on top. Dammit. I was now riding in 5th in our group, playing the accordion, having to push hard over the crests of hills, then riding up on people on the downhills; I've skied enough Tuesday night races to know that being 5th in a group of 5 is a bad place to be. But I couldn't go up hills fast enough to stay at the front of the group, and I started setting small goals for myself. Make it to 39k club, then you can let them go. The elite men caught us somewhere around 35k, after some sweet downhill rollers, definitely my favorite part of the course. Unfortunately, I let myself get gapped as the guys were going by, and I just didn't have the oomph to close that gap after their pack had left. I could see my midwestern ladies pulling away up a hill, and I just had nothing left to yo-yo back up to them, again.

So, the lonely slog began then. I tried to keep pushing the pace, putting my skis in existing ruts so that I wasn't pushing too much snow backwards, and when I got to bitch hill at 40k, I just put my head down and started counting V1 strides - 10 left, 10 right, 10 left, 10 right, oh hey, it's flat enough to V2 now. It was an insultingly long flat stretch at the top of that hill, but the next climb, I saw a skier ahead who didn't look strong enough to be a man. Oooh, you're a woman, you are dropping off the pace, and I am coming to get you. Having a carrot was a helpful distraction from my lonely slog, and discovering that it was a very bonked APU girl also raised my spirits - I may have left my speedylegs at home, but at least my feeding strategy is working and I don't have any body parts threatening to cramp. I caught Lauren on a flat, and at first, she tucked in behind on the uphill, and I was worried that I'd actually have a ski race on my hands. Luckily, she dropped back again, though I continued running scared for a couple km. 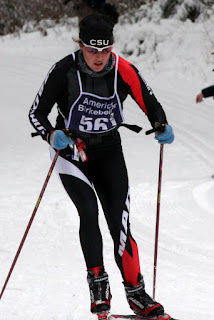 42-46k felt like they took forever, but eventually, I hit the lake, and I knew it was almost over. I just kept V2ing, trying to be speedy and snappy and failing miserably, but at least the lake wasn't uphill. I could see the figure of a woman ahead of me, near the end, but I wasn't closing the gap fast enough to catch her - it was Megan, from my earlier group. They'd put nearly 4 minutes on me, by the end. I should have chosen a softer pair of skis, but for the first 25k, the pair I was on was the right call. I couldn't have known that the grooming would suddenly get way soft. Too bad it wasn't icy sugar slush... I can ski on that =)

In the end, I'm disappointed. I finished 22nd, which is really neither here nor there - I wanted a top 15, but if I had felt good about the race, good about my effort, my attitude about the race would be drastically different. Instead, I'm left wondering why I felt so tired, from the gun. Many possible reasons, and many actions I probably could have changed, may change in the future. I think I'm getting old, and what used to work for peaking, no longer works in the same way. Luckily, one uninspired race result can't take away the best fitness of my life, and I am ready to bring everything I've got to the World Champs, next week!
Posted by Alex at 2:15 PM

Go Colby! Sounds like we had a merely equivalent experience in every way possible. Crush it this weekend!