The UVM carnival the past few years has been a combined Eastern Cup and Carnival race, and once or twice it was even a supertour. I haven't managed to make it there since 2009 or so, but I love those Morton-designed windy courses, so I was pumped to be able to come race! Unfortunately, I felt myself coming down with a cold on Saturday morning. I decided that it was just the dry air in the hotel room and the high heart rate was because I was really excited, so I did Saturday's race, but that wasn't a good move, and I had to skip the race on Sunday. Which turned out to be just fine, since the wax job took a bunch of steps, taking longer than usual, so it was good to have all hands on deck. But even if you're not racing, waxing and cheering and skiing around isn't quite resting, and the cold has taken some days to go away. Now I'm getting to that anxious point where I'm nervous about doing enough intensity before the Birkie, but I know the best thing I can do is just keep waiting until my body gives me the green light. At least low-intensity exercise feels fine.

Saturday's race was a 5k skate, on rock solid, icy conditions. They're hurting for snow! The corners were all scraped down to ice by the time I raced (they seeded all EC racers after the college racers), and there were some glare ice patches on the uphills, too, and plenty of rocky dirty spots. That's ski racing in New England. I started 15s ahead of one of my juniors, and I was half expecting her to catch me, but I held her off. The main climb comes early on, with still 2.5km left after that, so I tried not to trash myself up the hill, skiing smoothly so I'd have some energy left for the twists and turns in the last 2.5km. My legs felt heavy and leaden, but ski racing is hard, so I don't let it bother me when I'm tired.

Cate nearly made contact on the far hill, but there is a loooong gradually uphill finishing stretch, and I managed to put a 12s gap on her up that finish straight. Seriously, I never thought it would end. Tough courses, they require excellent fitness and good skiing, and I'd been hoping to finish a bit higher up the results list, but what can you do when your legs just aren't there. Scratching the second day was hard when the first day didn't go as planned, but my lungs appreciated it.

This weekend is supposed to be the Bill Koch Festival, and Ed and I are in charge of the ski orienteering noncompetitive event, but the snowpocalypse came to town before the Bill Koch skiers, and there's currently a ban on driving in the State of Massachusetts... so, who knows if this ski-o will go off! The snowpocalypse is pretty cool, though - finally, snow! 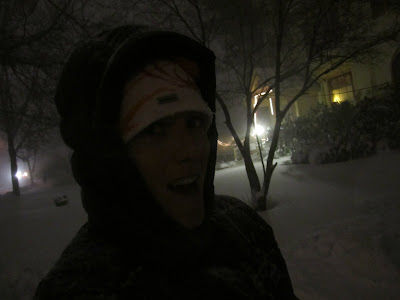 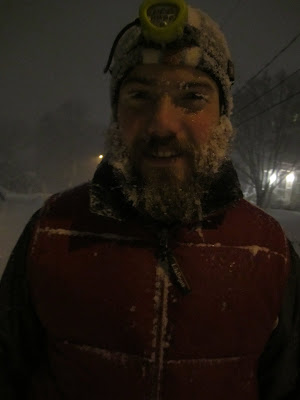 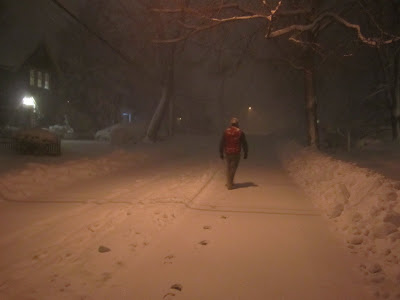 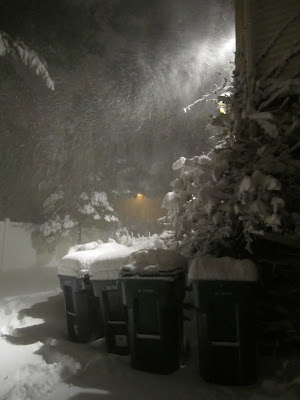 These photos are from ~10pm, when it had only been snowing for 4-5 hours. It's now 8am the next day, and still snowing... time to go shovel out behind the truck again, for if they open the roads and we go put on a ski-o.
Posted by Alex at 8:13 AM