I flew to Finland on Thursday evening, picked up a rental car in Helsinki, picked up Ali and Brendan (who'd arrived a day earlier), and kept driving north for a few hours, until we arrived in Leppävirta, at a tent-sized cabin by a lake to spend the night before running a race the next day.  The cabin was adorably cute, but possibly because of its tininess, it was very warm inside, so we ate dinner outside in full sunlight, before cramming ourselves back in, where I fell into one of those deep, dreamless, sleeps of the exhausted traveler.

Inside the cute little cabin 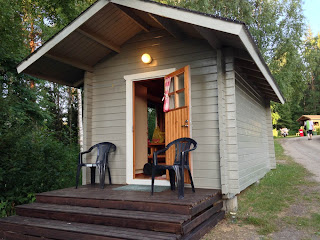 Outside of the little cabin 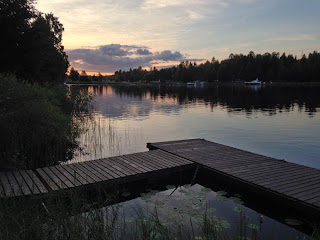 A Finnish Lake at 11pm.  This was down in Leppävirta.  Even more daylight up in Vuokatti!

Morning came too early (not like it ever got dark overnight), and the three of us crammed back into our tiny Euro supercar (5 gallon tank, roughly 60mi/gallon), and headed to a race!  This was supposedly a Regional Championships, I figured maybe the size of an A meet back home, but there weren't huge fields.  I suppose maybe there just aren't that many people in this region of Finland - we had just driven through five hours of essentially nothingness. 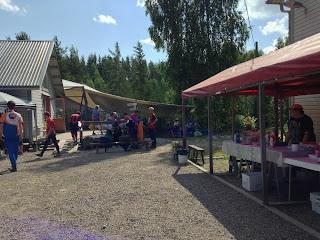 Anyway, it was a two-race deal, with a sprint in the morning, and a middle distance in the afternoon.  I was hoping to feel good, but after nearly missing my start (darn time zones, out there to confuse me!), I just felt terrible, physically, and could barely keep up an eight-minute mile on the pavement.  This was discouraging, but I hoped that maybe the jetlag and exhaustion would just sort of wear off for the afternoon.  Unfortunately, that wasn't really the case, and I made a lot of mistakes to boot, so by the time I stumbled across the finish line I was pretty done.  Trying to pull a clean shirt out of my bag, my forearms cramped up, and going for a quick dip in the river, my toes and feet cramped up swimming, so clearly there were some nutritional deficiencies as well as exhaustion playing havoc with my body.  Yikes! 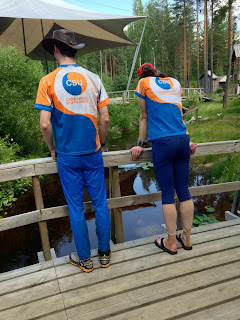 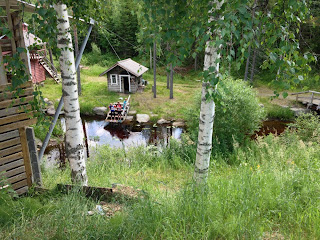 Shower facility, down by the river. 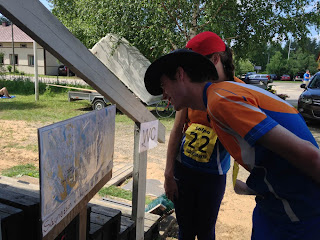 Studying an old map of the area before the middle distance race. 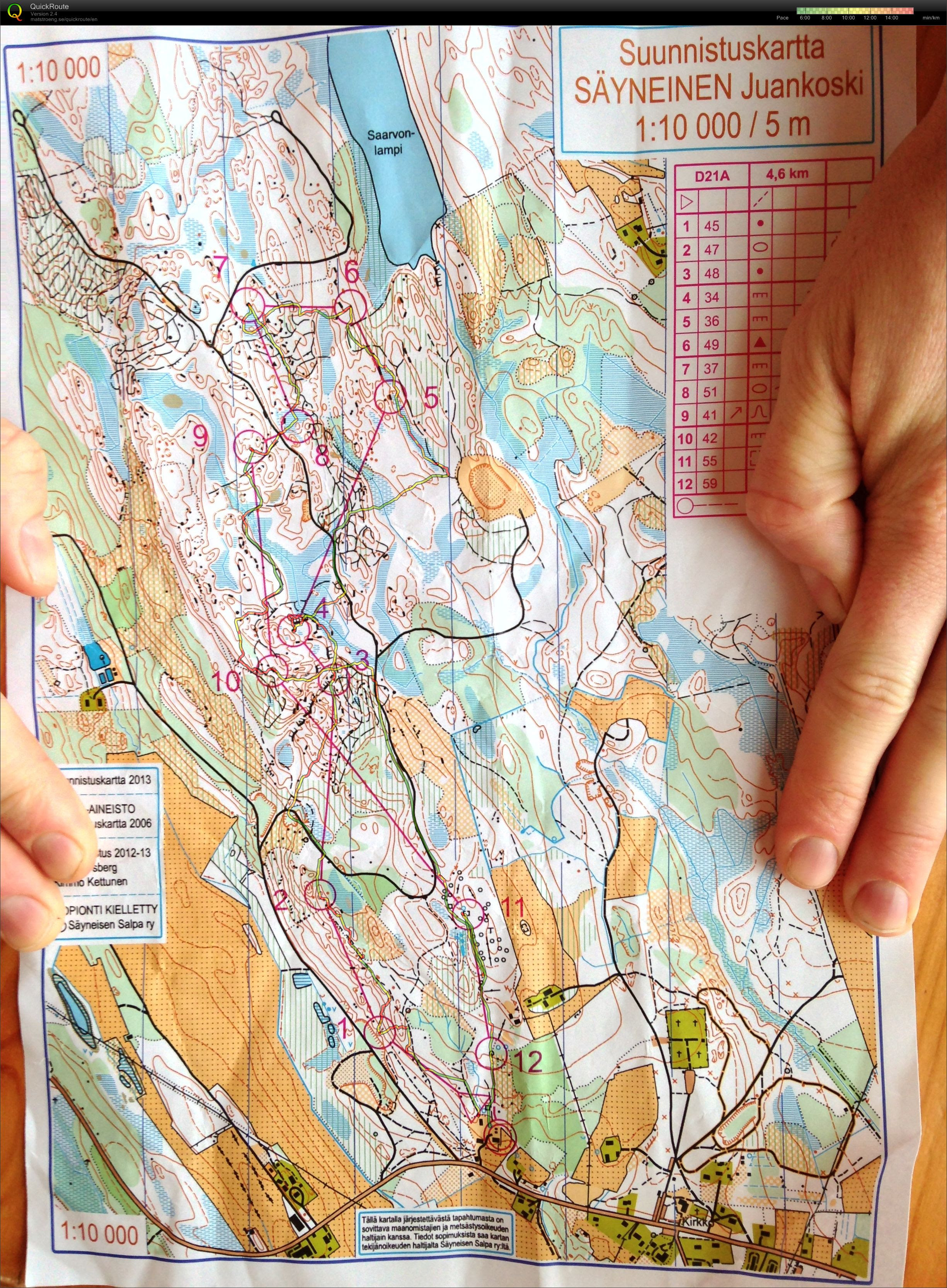 My map and route from the middle distance race.

I managed to stay awake enough to drive the next few hours north to Vuokatti, where we found our next cabin, thankfully much larger than the last, that will be our home for the next week.  Right now it is still just Ali, Brendan and I, but tonight Cristina arrives, Eric comes in at some point in the wee hours of the night, and I think Wyatt and Alison arrive later this week, too.  The currently wonderful peaceful work-inducing environment will soon change, I fear! 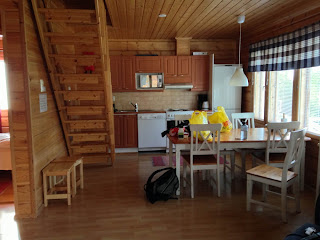 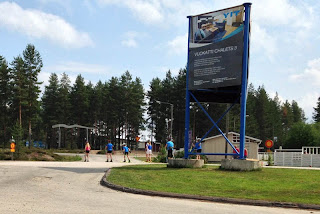 Vuokatti is home to one of Finland's largest ski schools, so there is all sorts of awesome ski-related coolness, like rollerski paths everywhere, a downhill mountain, both sizes of ski jumps, a super sweet ski school campus, and, of course, the ski tunnel itself.  Yes, I'll be visiting that!

Yesterday afternoon I got out for a brief training run on a sprint map that is adjacent to our cabin, and it felt really good to move some blood around my legs and try to flush out the fatigue.  This morning, we headed to one of the training maps nearby, to start getting familiar with the terrain around here.  The forests are wide open and easy running (aside from all the hills), with various aged versions of the same type of pine tree everywhere, over a slightly squishy mossy undergrowth with some low blueberries, all of this over sand.  Quite pleasant!  Brendan is heading out for a second training now, while Ali and I are staying in to try and get more work done.  Then dinnertime! 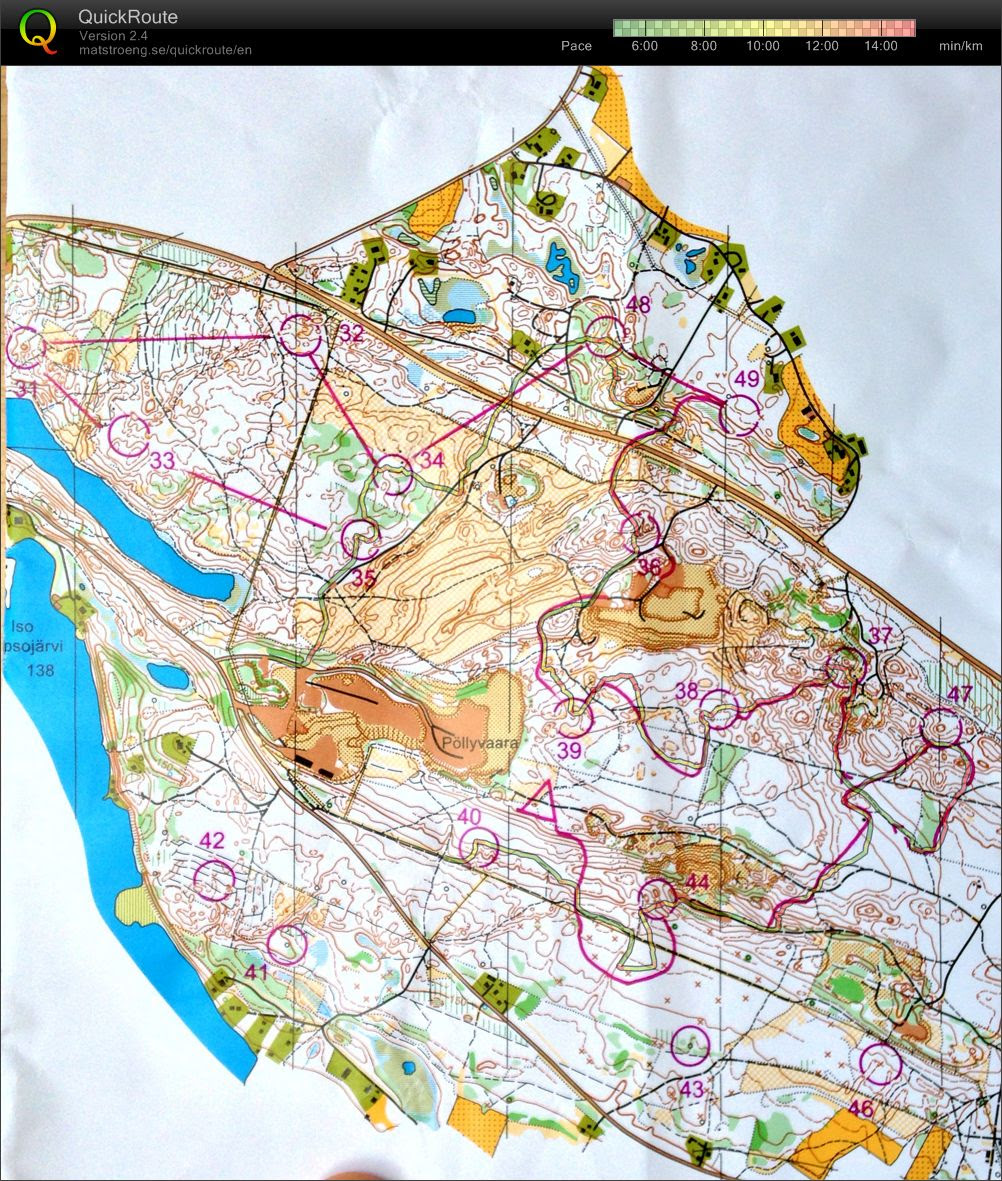 Long distance training map at Pöllyvaara. I drew a line, to follow, and the idea is that will help me look at the terrain a lot and learn from the map. 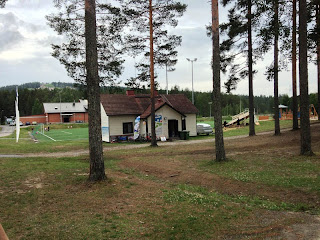 The event center office is a little cabin.  Typical! 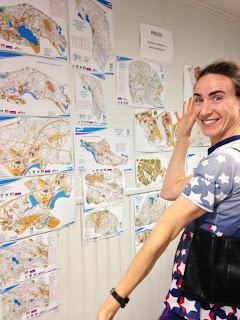 Inside, they have a wall of maps that you can purchase for training before WOC.  This excites Ali. 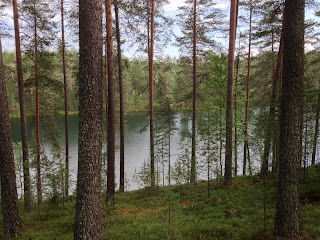 The forests are beautiful and open.  I like running here. 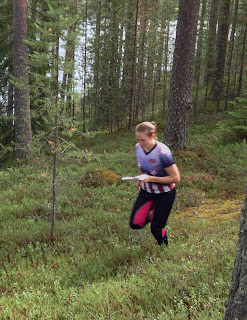 Ali and I staged some photos.  Woo! 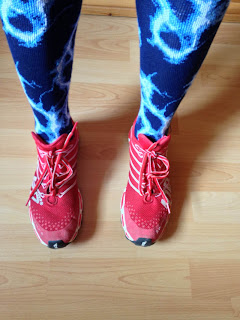 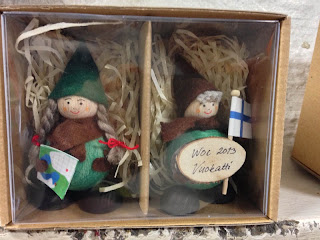 They had these really cute little figurines for sale in the WOC event center.
Posted by Alex at 8:47 AM