A few weeks back, Jamie sent an email probing to see if there were any interest in putting together some teams for the Lynn Woods relay.  This is a pretty big race, with teams of four each running 2.5mi, to make a 10mi relay.  Naturally, I signed up, and the plan was to have a coaches team fighting against an athlete's team.  Unfortunately, the athletes never quite got their act together, and didn't register in time.  Then, Rob strained his calf, and Kathy twisted her ankle, and suddenly the coaches team was down to just Jamie and me.  Luckily, we convinced Lisa that her injury was healed enough to run 2.5mi, and Lewis wasn't a hard sell either, which was good, since he was the fastest runner on the team.  Back to four people! phew.

>br/> It was a hot night, but not too muggy, and I managed to miss the start of the race, because I'd missed my train from Boston.  Thankfully, I was running last leg.  Jamie led off, holding his own among 109 teams in 52nd place, and tagged off to Lisa.  Despite a nagging injury, Lisa ran very speedily, pulling us up to 37th, and beating Jamie's time handily.  Now it was Lewis' time, and being young and speedy, Lewis pulled out a 15:39, good enough for 19th overall (that's out of 436), and that seriously moved us up in the ranks, to 24th.  My turn, and I had a pile of people to chase down.  You never knew what category they were racing in, nor whether they were on 3rd or 4th leg (though you could guess that part), so basically the name of the game was to just pass as many people as possible, while trying not to get passed. 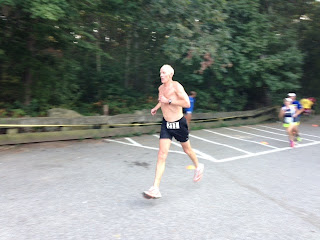 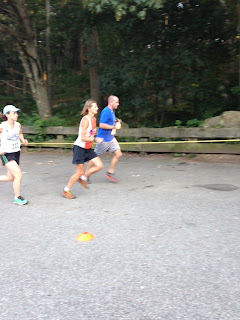 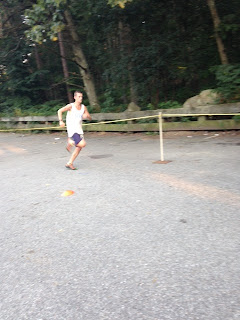 Of course, I immediately got passed, by a speedy-looking girl, and of course, I tried to stay with her.  This is a hilly 2.5mi course, and even though it's mostly doubletrack, the footing is loose and that means dust. The chest cold wasn't 100% gone, and combined with the dust, this made breathing very difficult.  Bummer! I read somewhere once that racing is easier when you can breathe.  Anyway, by the turn-around place, shortly after 1mi, I had to let speedy-girl go, and tried not to hemorrhage too much more time.  The course gets fun for a tiny bit of singletrack, as it climbs up almost to the stone tower, but on that stretch, I got passed by another speedy girl, this one going even faster than the last.  I wish I could run like that.  There was even less hope of hanging on to her, and I was very happy to finally head into the downhill.  It's not much of a downhill, since you haven't done that much of an uphill, but these things are relative, and even slight downhill feels better than no downhill when your lungs aren't in the mood to deliver any oxygen to the blood.

Luckily, I passed more people than passed me, and picked up an extra two spots for our team, placing us 22nd overall, and 2nd in the coed category.  I think my split was around 19th for the girls, but they don't have it broken out by gender. I do know I was 2:40 back of the first lady in... ouch.  Anyway, this'll be a fun one to run without a cold next year! 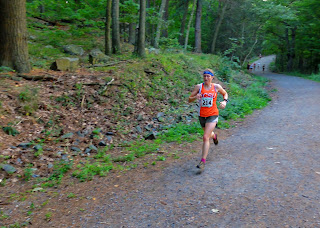 I made Jamie take some photos of me, even though it was too dark for that sort of thing.  woooo downhills! 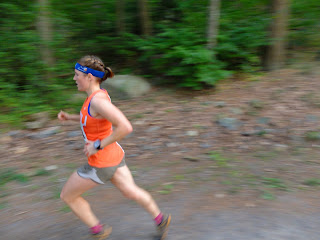