I'm a week behind, here, but this race was pretty awesome, so deserves a write-up. I convinced Zan and Brendan to come play at a trail race with me, even though it was kind of far away, in western Connecticut. I was intrigued when the race flyer claimed that the easiest part of the race was the first and last 400m. They could have done away with that boring part, in my opinion =)

I've started ski training again since Finland, and that means that my everything is really really sore right now. Given the soreness of my everything, I figured I'd better play it by ear, and stay within my limits and just enjoy the day during the race. Off we go, and after those first 400m the trail goes up, but at a runnable grade. This is annoying, because a girl in a black tank top (Lauren Ross) immediately ran away from me. I debated keeping up with her, and decided that would impede my ability to enjoy the day, so I kept the effort under wraps and an eye on my HRM, trudging fairly slowly, trying to become one with the burning in my quads. Eventually the trail tilted downward, and Lauren with a herd of men came into view ahead, and I was very relieved - my technical downhilling skills will keep me within striking distance.

I was much less worried as I slowly made my way up the following climbs, and then there was a decent descent where I actually ended up making contact with Lauren and her group, around 2mi. It took work to convince myself to just hang out behind them for a bit, recovering; when you make a move, you want it to be decisive, so it's best to rest a bit first. Eventually I couldn't deal with wasting all that glorious rocky trail, and took the lead. I had about a minute buffer at the top of the hill with the nice views. I know this, because I got the fluttery heart feeling up there, so I had to sit down. Thankfully, the Valsalva maneuver actually worked, and within two minutes, I was back to normal and running again. No idea why two weeks ago it was a 15min wait, and today only 2min. Oh well, that was a dodged bullet.

I had to chase back to Lauren then, and somewhere in there, we hit some pavement, where she really took off. Damn. Thankfully, somewhere thereafter was a muddy rock pile to cross, so I got ahead again. She caught up when I stopped to drink at 4mi, and I consciously stayed behind her for the next mile or so, keeping things below threshold and assessing the body. The trail was awesome, and I was having a wonderful time out there, so the next downward tilt I made a move, and caught two dudes ahead of me, and thankfully the earth kept pointing downwards basically all the way to the finish; I wasn't moving too well on the uphills. I was very happy to take the win today, because I thought the race was over when I got the fluttery heart feeling. It was a gorgeous day for running, if a bit humid, and I thought the trail was fantastic! After, we stuck around for a bit, cooling off/washing up in the river, eating potluck food, winning bags of candy (woo!), and making new friends. A good day! I'll be back next year if the schedule works out! 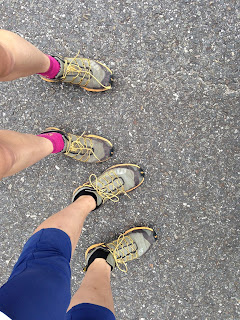 Zan and I both picked some great shoes. 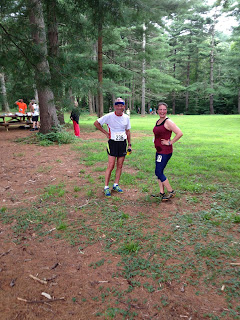 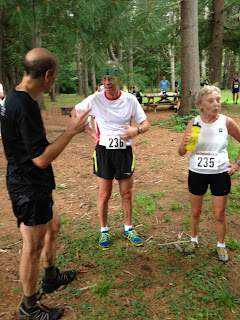 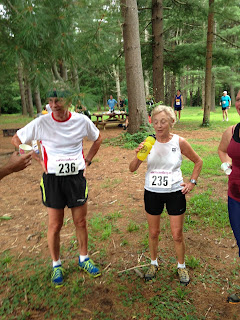 We also found George, Lynn, and Phil, all independently deciding to come to the race!  A very pleasant surprise =) 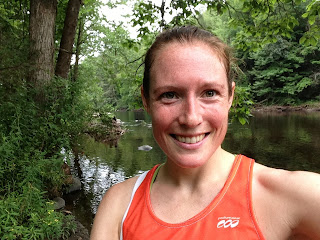 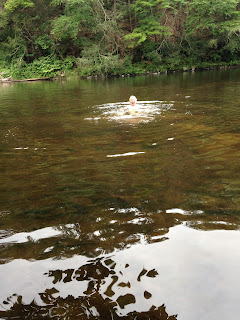 Lynn takes a dive into the freezing cold Farmington River after the race.  Brave lady! 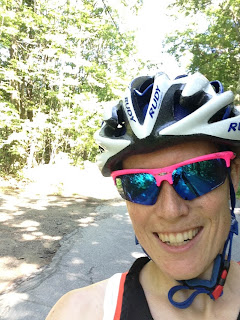 Rolling through Littleton the day before.  Rollerskiing can be fun! 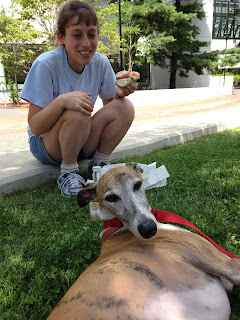 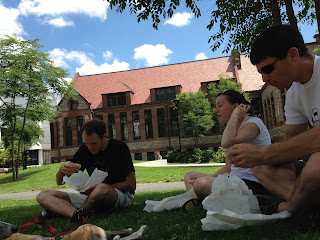 After rollerskiing, helping to move Lori, Presto, and SGB out of their apartment and into mobile storage units to head to California, with Tom and Kristi.  I'll be missing Presto; it's easier to stay in touch with his humans.