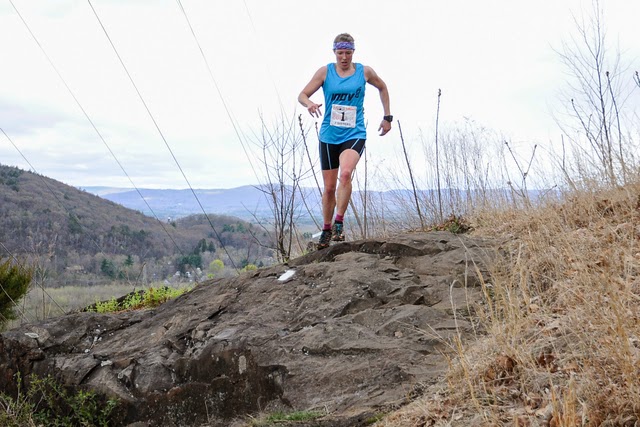 I went and purchased a photo from Ben at Northeast Race Photo.  Thanks Ben! Despite the rockiness underfoot, I managed to sneak in a peek at the view every now and then, and it was lovely.  The stormy clouds overhead turned the Connecticut River to this shining silver pathway crawling south, winding around the low wooded hills of western mass, and despite never being any higher than 300m, you feel like you're on top of the world. 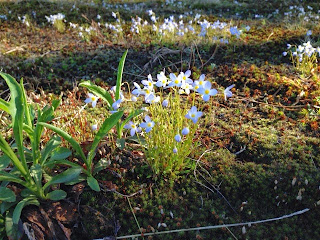 The 7 Sisters Trail Race is an awesome run along one of the rockier ridges in the Connecticut River Valley, out and back on this crazy singletrack trail that only certifiably insane folks would think to run, much less race. We're not just talking 1380m of elevation gain (for comparison, hiking up Mt. Washington is 1426m), but an equivalent amount of downhill, over terrain as rocky, steep, technical, and brutal as anything you'd encounter on much more grandiose peaks.  Most people like to wear thick-soled hiking boots and carry a day pack for expeditions like this.  The certifiably insane 433 individuals who finished the 7 Sisters race generally wore minimalist trail shoes (and at least one guy was in those Vibram 5-fingers "shoes", and one guy was in sandals), carrying at most a liter of water and maybe 300kcal of sugar.  It takes some serious mental misalignment to consider that this may be a good idea, but luckily there's a community of like-minded other nuts who make me think I'm totally normal. 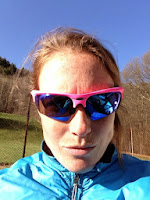 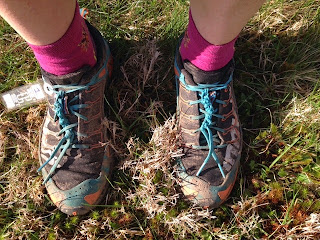 Ready to race!  Love the X-Talons, especially when paired with pink socks.  I went for a pink-and-blue theme today.  Complete faith in your shoes is a pre-requisite of tumbling down these rocky hills with any semblance of control.

This year's 7 Sisters race was part of the La Sportiva Mountain Cup, and that brought some new faces to the race, serious faces.  With the usual arrangement of speedy ladies from the Grand Tree races as well, I knew I'd have my work cut out for me to defend bib #1.  I liked the new wave format; this meant that I was among the top 30-40 runners as we climbed hand over foot up the first hill, and everyone was going close to the pace I wanted, as opposed to last year, where I lined up too far back and spent a lot of energy passing people.  As we started climbing, I watched the eventual top 4 ladies and one or two others pull away from me, and I discovered that I didn't quite have the legs to go with them today.  My calves were cramping up, and I could feel the lactic acid swimming in my quads as I crested every hill and tried to start running again.  I discovered that it was best to let myself have 3-4 walking strides before running, as that gave my legs a brief chance to recover before putting the throttle down again, and this change in variation allowed me to catch and pass Nina Silitch, of ski mountaineering fame, and close the gap to Amber Reece-Young, an Inov-8 teammate.  By the second water stop, I thought I might have a fighting chance to beat Amber, if I could put enough distance on her on the downhill.  Our skillsets were extremely mis-matched, as she would run by me on the uphills and I'd yo-yo back to her on the downhills. 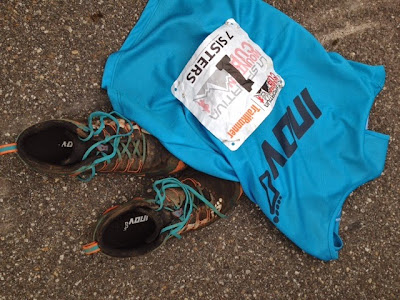 Along the way, I thankfully managed to catch and pass the dude in the 5-fingers shoes and the dude in the Born-to-run-style flipflops, who were, understandably, quite hesitant on the downhills. Guys, shoes are useful when you're trying to run across rocks! By the time I was heading into the descent to the turn-around, I was with a group of guys who were descending well enough that I wasn't totally dropping them, and it was fun to be part of a group.  Unfortunately, I whacked my knee pretty good on a rock as I was clambering under a tree somewhere along the way, hard enough I had to stop to catch my breath and wait for the stars to clear from my vision.  This let Amber catch up, and may have ruined my plans to use my downhill dancing skills to truly build a lead.  I love the out-and-back nature of this course, as it not only lets your scope your competition, but also you can cheer for the returning runners.  Very impressive to see the leading woman, Megan Kimmel, in fourth place overall!  My turn back up the hill, I knew I had to keep pushing the pace, and hold off Amber as long as possible on the sustained climb, so that I've have a chance to catch back up on the rolling rocky stuff.  This took some serious work!  By the water stop at the summit house I was still in contact, but I was starting to hurt, and I had no more food with me.  Uh oh. With 45-50min remaining in the race, I hoped I had enough reserves to get through without a full bonk.

Fun running along with the guys over all the lumps and bumps, yo-yoing with Amber and sort of hoping that because we were pushing each other, maybe we would catch up to Kehr Davis, the woman in third.  I could feel the fatigue in my quads, and by the time we reached the last water stop, I was begging anyone I saw for some food.  Nothing doing.  I took a face-first header down a hill, and after that I throttled back the downhills a little; my feet weren't landing where I wanted them to anymore.  Amber managed to put a minute into me by the end, but the back and forth made for a super fun race.  Fifth place was totally acceptable in my book, against such strong competition.  In the end, on the "new" course that was slightly longer than last year, I took about a minute off my time and was significantly improved in terms of % back from the winning guy.  More importantly, I had the fastest time of everyone in my car driving back to Boston, and the day ended with delicious ice cream from Atkin's Farm. 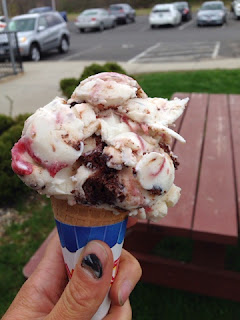 Tastes so good after a run...

Next year we can carpool and have the same degree of difficulty (trail half the day before) and I'll be in the first wave and we can race for real.