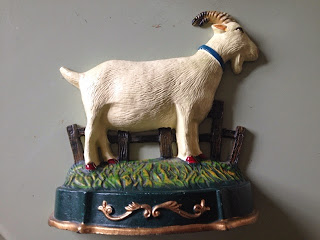 The 2014 Billygoat is in the books, and I retained my guardianship of the ugly Billygoat doorstop.  This yours-for-a-year prize has been in rotation since 1999, according to the signatures on the back, and each year it goes to the winner of the Billygoat.  There are two of these; one for the female winner and one for the male.  I won the goat last year, with a really good race I might add, but this year US Champ Kseniya was among the registrants, and in technical low-visibility terrain like Baldwin Hill, I knew my guardianship of this ugly doorstopper was tenuous.
JJ Cote designed this year's Billygoat, and he offered an excellent selection of skip choices.  One of the quirks of this race is that you can skip any one, but only one, of the controls.  It adds an interesting twist to the pack dynamic of the mass start race, especially when one of the obvious first skips was the first control.  What to do?!? 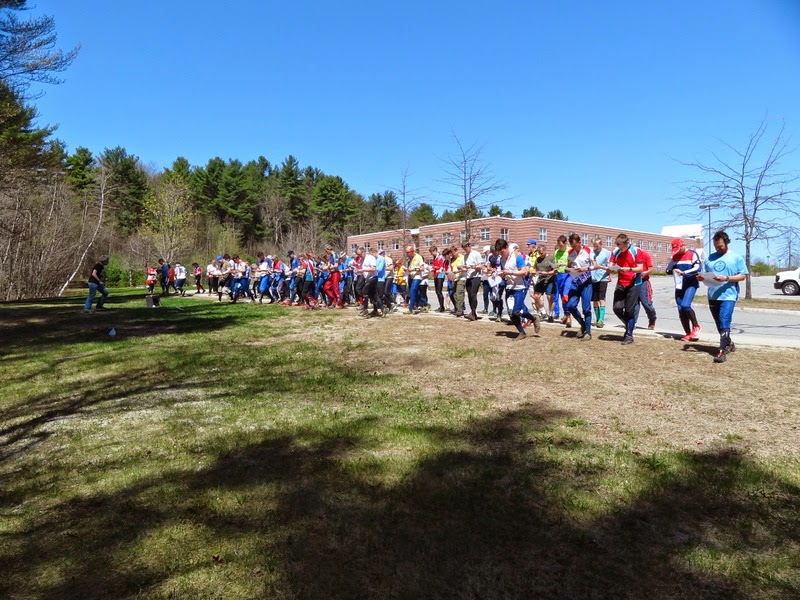 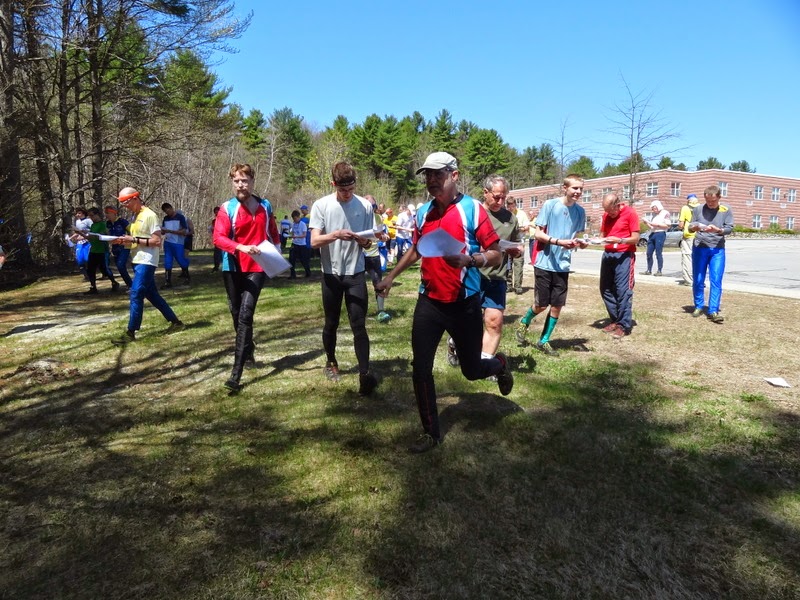 Chaos happens, and everyone runs off in different directions! 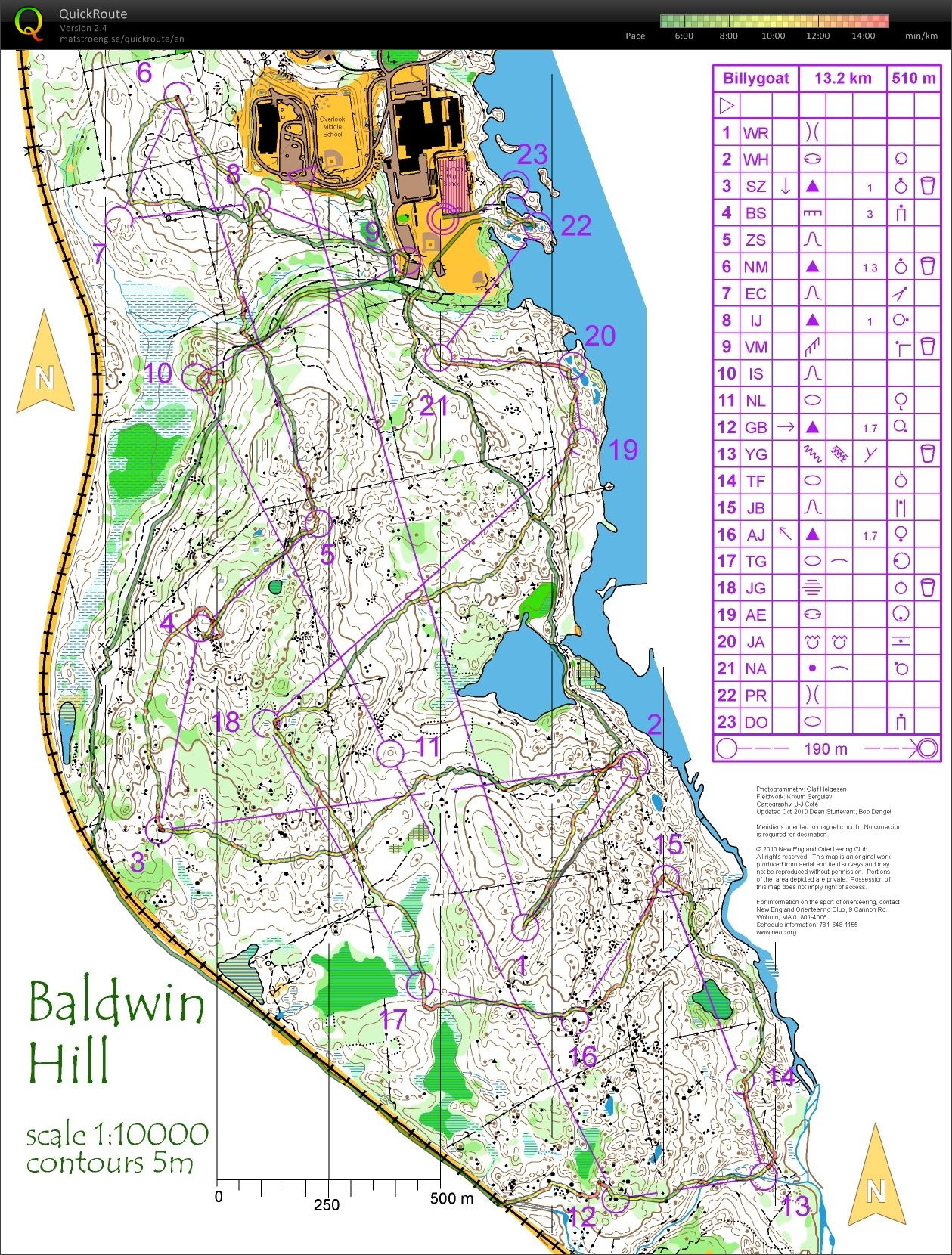 I decided that I didn't want to waste my skip so early, and tried to decide between some of the later skips.  I was having a tough day, physically, with really tired and cramping calves from the start, which led to a bit of a mental battle on this hot day to stay in the game.  I proceeded to make a mistake on 4, and ended up behind a few people that I really would have rather been ahead of.  Luckily, I didn't do anything stupid trying to drop them; I knew I was going through a rough spot and I could come out of this if I stayed patient and waited for my legs to come around.  Toward the 6-7-8 loop, I was running with Jeff, and it was nice to share some time with him, even if we didn't talk much.  Crossing the trail to 6, I saw Greg Balter, Kseniya, and Peter all heading toward 8, and took a split.  I was not happy that they were this far ahead of me this early in the game, but all I could do was pray that they'd already skipped, and hope that my legs started to cooperate sooner rather than later.
Leaving the water stop at #9, I settled on skipping #11.  This wouldn't save me any huge distance, but I knew that I'd be able to up the speed on the trail and then the railroad tracks, and it would be nice to shut off my brain for a bit. Given how my calves were behaving off-trail, minimizing the amount of time I spent in the forest would maximize my chances of closing that gap to Kseniya and Greg and Peter.  So, once you've made the decision, you gotta go with it full bore.  The hot sun was unpleasant as I chugged along the tracks, but I was able to successfully change gears, kicking myself out of self-pity mode and into hunting-mode.  Leaving 12 and dropping to the river valley for 13, I saw Kseniya, and boy was that a relief.  All three of that group had skipped #1.  Unfortunately, I was pretty gassed by then, and though I managed to catch and drop her by 16, I didn't have any oomph left in the legs to hunt down Greg.  I didn't know it, but I had passed Peter in my mad dash along the tracks; I'd assumed he was still ahead of me.   I got to within 3.5min of Greg, but not within striking distance.  The good news was I was barely able to hold of Kseniya, so I took home the billygoat doorstop and a gooey chocolate cupcake!  Results. 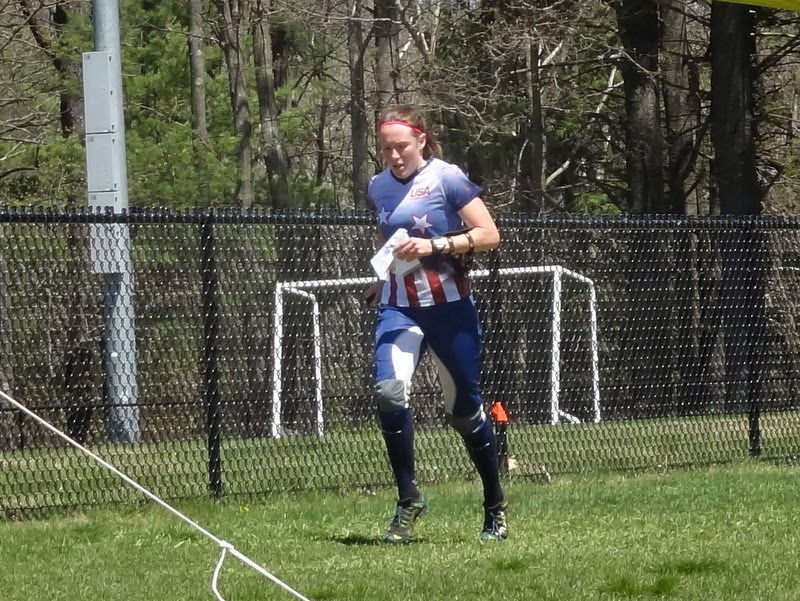 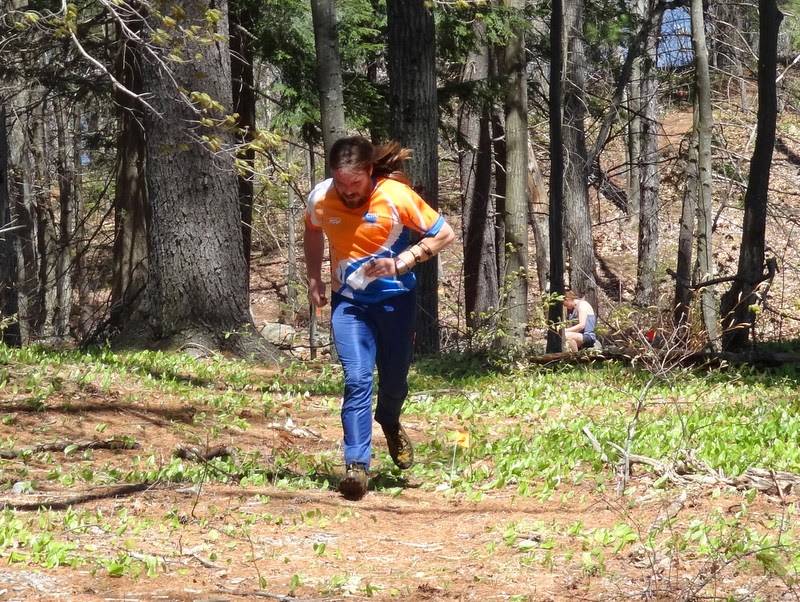 Ed charging to the finish.