The North American Orienteering Championships (NAOC) is an event that happens every two years, alternating between Canada and the United States. Occasionally we get competitors from Barbados, but they've yet to host the NAOC =).  This year Ottawa Orienteering Club hosted the event, in the town of Arnprior, along the Madawasak River. There were four events: the middle distance, long distance, sprint, and sprint relay, held over three days.  This event has been the focus of Team USA since 2012, with the aim to win the Bjorn Kjellstrom cup by beating Canada.

Ed and I drove up from Rochester, after the US Champs and a whirlwind week spent visiting friends and family.  Thankfully it was a taper week, so I didn't have to fit training in there too, and by Thursday or Friday I was finally feeling like I had recovered from the head cold that had been plaguing me during the US Champs.  I didn't feel like I'd done a fantastic job preparing for North Americans in terms of map study, but physically I felt ready, and emotionally I felt confident.  The weather was gorgeous, and the Ottawa Orienteering Club put on a fantastic event, really raising the bar in terms of North American events closer to what felt like a true European event atmosphere.  Very good vibes, from within the team and among all of our friends in the orienteering community.

Middle Distance
The first race was the middle distance, and after my disastrous two controls last weekend I was looking forward to redemption.  My goal was to keep the effort under wraps, and really focus on the navigation, as I have orienteered in this area before and definitely found it challenging.  The terrain has little relief, with many small undulating hills and not much to catch you if you mess up and lose contact with the map.  This, paired with all the leaves still on the trees in brilliant colors, meant that visibility was low and the navigation was tricky.  I started out on the wrong foot, unfortunately, when I made nearly two minutes of error on the way to the first control, arriving at the same time as Sam Saeger, who had started 2min behind me.  Damn, that didn't take long.  I did a quick attitude readjustment, and determined to keep up with Sam as long as I could keep thinking straight.  Things went great for the next five controls, and it was totally enlightening to take an orienteering lesson from Sam - she is so confident! So controlled!

Unfortunately, as we neared control 6, I started to notice that I was getting a little too oxygen-deprived, and determined that I would stop for 5 seconds at the control to let Sam go and run my own race. This would have been a good plan, except that I got to the control I saw Hannah, and I didn't want her to get a free ride from Sam without me!  So, against better judgement, I kept going at a pace that was just a smidge too fast, and within a minute or so, I'd lost contact with the map and wasn't really sure where I was. The second mistake was that I kept going, hoping that soon things would start making sense again, rather than to stop, look around, and then relocate on something big. Oh, hindsight, how easy you make everything look!  In my defense, this was a very tricky area, that we all agree is a bit of a Bermuda triangle of navigation, and in the vicinity of control 7 there were probably upwards of 10 women wandering around with no idea where we were. Embarrassing. Eventually I relocated successfully, after three botched attempts, and after 13 minutes on what should have been a 5 minute leg, I punched the control. Sigh. That wasn't part of the plan, but time to put that behind me and get on with racing!

I recovered well, keeping my head in the game, and had some really good legs after that, re-finding the quick pace I'd had while running with Sam and spiking controls with full confidence. If not for an eight-minute error, that was a really excellent race, and I still ended up 4th US, 6th North American, and 8th overall (results, map).  Time to channel that feeling of confidence and control for tomorrow. The day dawned chilly and clear, and after a short morning jog I knew my legs had shown up to do a good job. Alas, the flat terrain with difficult navigation meant that the course wasn't much of a physical challenge, which is often what I rely on in long distance races to get an edge over my competitors.  My plan for the day was to be even more cautious than the day before; don't move from a control until I have a plan.  This went well for the first control, but then I sort of botched following my plan while coming toward #2, and I spent a while going very slowly trying to match up where I was with the map. After eventually finding 2, things didn't get any better, and I blew a minute on 3, and nearly 10 minutes on 4. I continually tried to get my head screwed on straight, but kept failing, with the worst mistake coming in the arena at the spectator control.  I was pretty upset with myself at this point, and considered dropping out just because I was so disgusted with my orienteering. The photo to the left of Ed is from Adrian Zissos, and a great representation of how I viewed the terrain - thick, impossible to navigate through, and with occasional beaver dams in the way.

But, I'm not an athlete who drops out of races, so I took a deep breath, and attacked the second half of the course with full gusto and focus. This went well, and I had a very good second half of my race, but it was too little, too late.  I ended up 11th, which was certainly an improvement from the 32nd place I'd been in after the spectator control debacle.  Results. Not how I'd envisioned my long distance race to go, but time to move on, I've got two sprints to run tomorrow. Map 1, map 2. 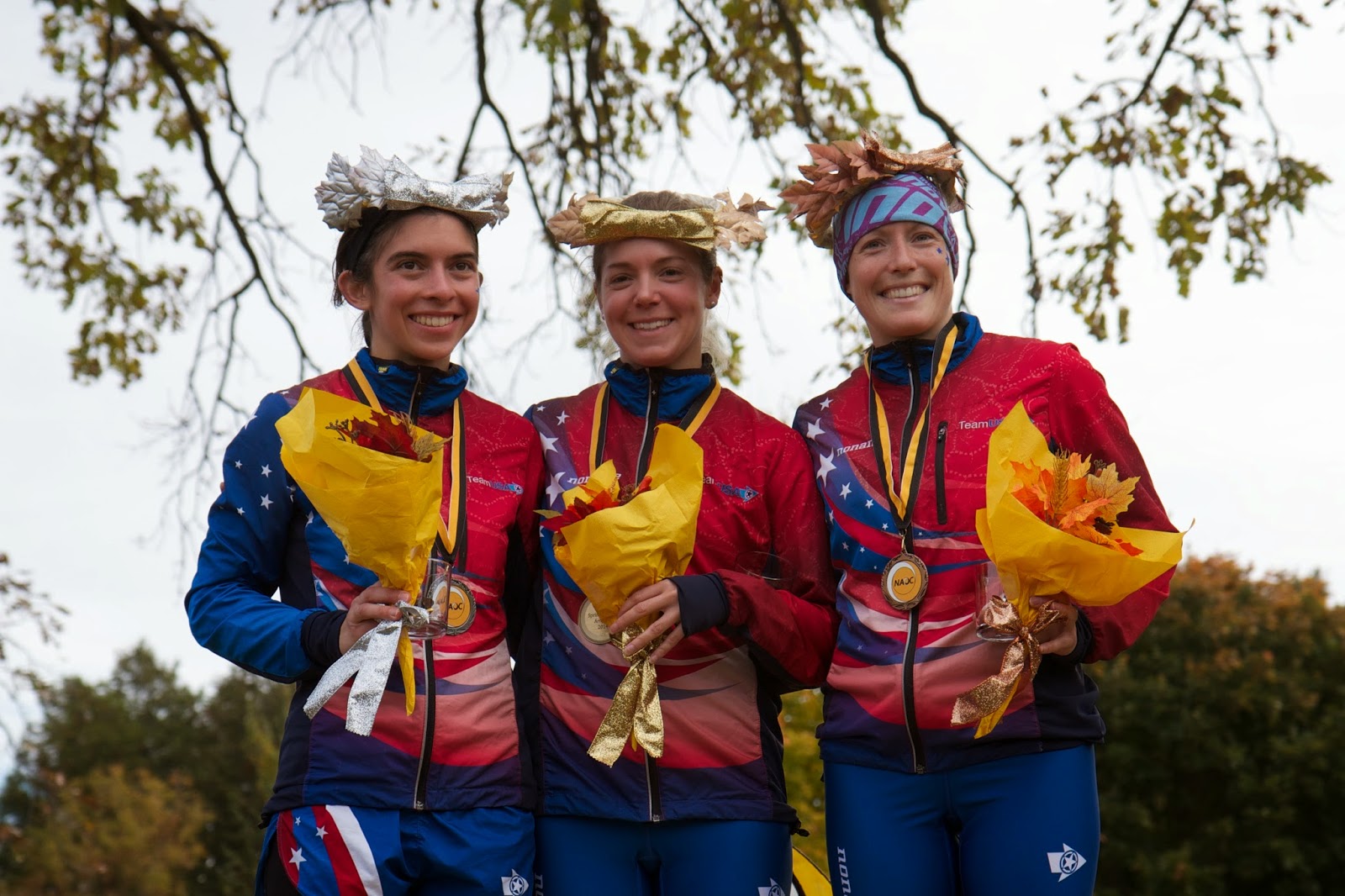 Monday rolled around and I expected to be tired, but when you spend so much time lost turns out your legs are still pretty fresh. Woo! The sprint race was an urban sprint, and the organizers had worked with the town to get many streets closed off, so we could run on empty streets. What a treat! I had a solid run, staying within myself enough to not blow it, though I nearly did when I brainfarted after reading ahead on the way to 6 - I lost nearly 40s there, and relinquished my lead on the race. I clawed my way back up to 3rd place by the end, through a tricky little control-pick-y area by the finish with lots of spectators.  That was a very fun sprint, much more interesting than I'd expected, and taking the bronze medal in the North American Champs was icing on the cake. Yay! (Results, map) 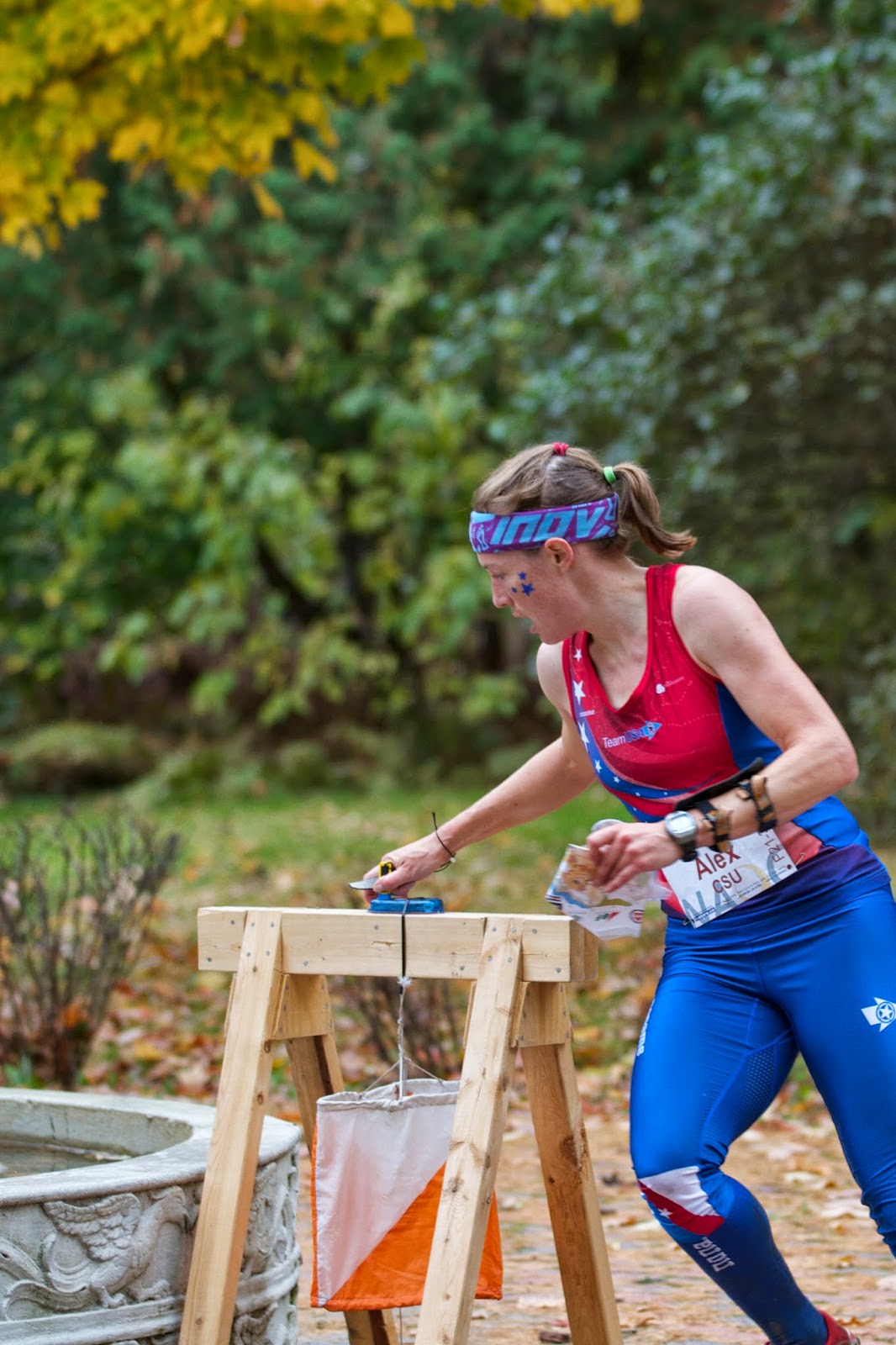 Shortly after the sprint finished, it was time for the sprint relay. The set-up for this race is that it's a four-person relay, consisting of two men and two women, and it's a mass start race. Each leg was somewhere between 2-3km, with winning times between 11-20 minutes.  When I give distances of orienteering races, it's the straight-line distance, and you often run a good bit further.

I was running first leg, on team 1 for the US.  This was very exciting, because it's a huge honor to me to be named to the top relay.  The sprint relay went through a park called Gillies Grove as well as the typical grassland and urban terrain, but the course setter made a very interesting course with good forking, so I kept seeing other people. Eventually it became clear that myself and Emma Waddington, a top Canadian junior, were running clear of the pack, and we came through the spectator loop with a good lead.  I managed to put six seconds on her through the final loop, tagging off to Eric Bone in first! 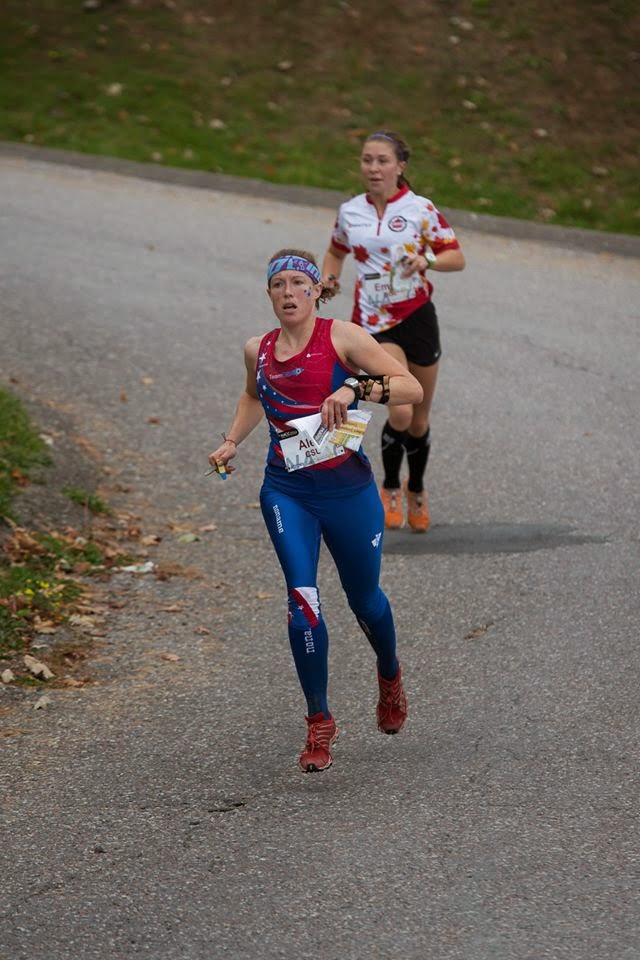 Eric did a good job, against some very good Canadian sprinters, keeping us within 10 seconds of the lead team, and then tagged off to Ross Smith. Ross had another good run, but it was hard to keep up with world-class Will from Canada, and we had a minute deficit when Ross tagged to Samantha Saeger for the final leg. Sam had her work cut out for her, but performed like that athlete she is and blasted past the Canadian teams to secure us the win with a comfortable margin. So exciting!  Our second team, anchored by Alison Campbell, also had a strong finish, giving us first and second place. Go Team!

It felt very good to end the weekend on a high point, especially after two frustrating forest races. This was the last big hurrah before winter training starts, so I was psyched to meet some of my season goals.  There were such good vibes in the arena during and after the relay, there was really nowhere else I'd want to be. I can't wait til 2016! 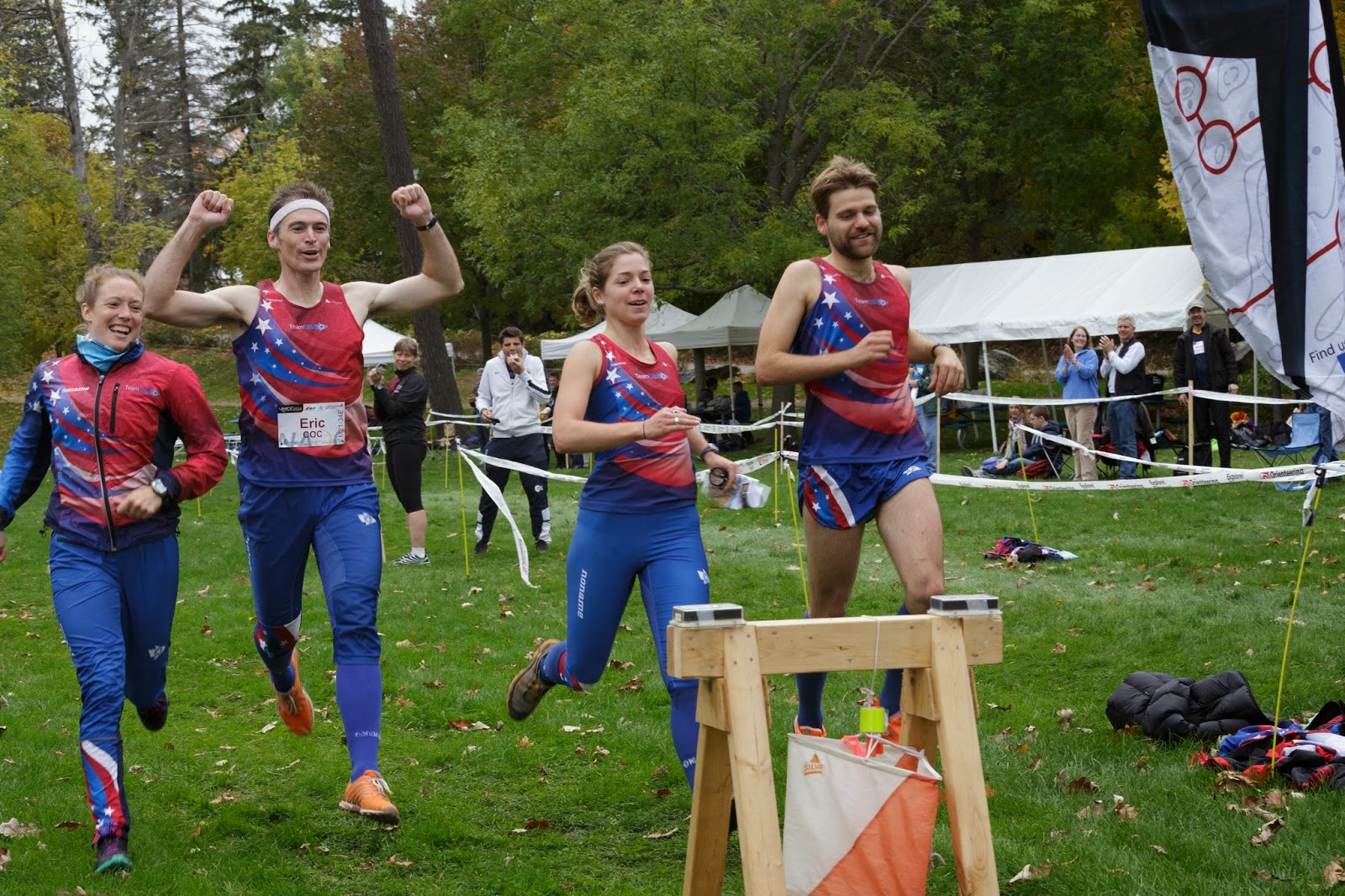 Running with Sam to the finish after her stellar anchor run! 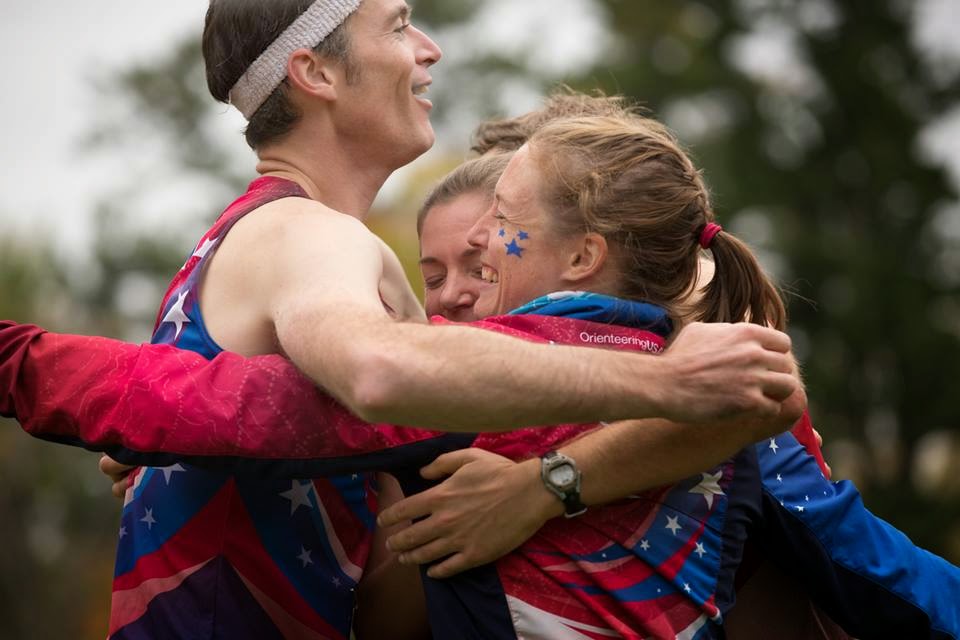 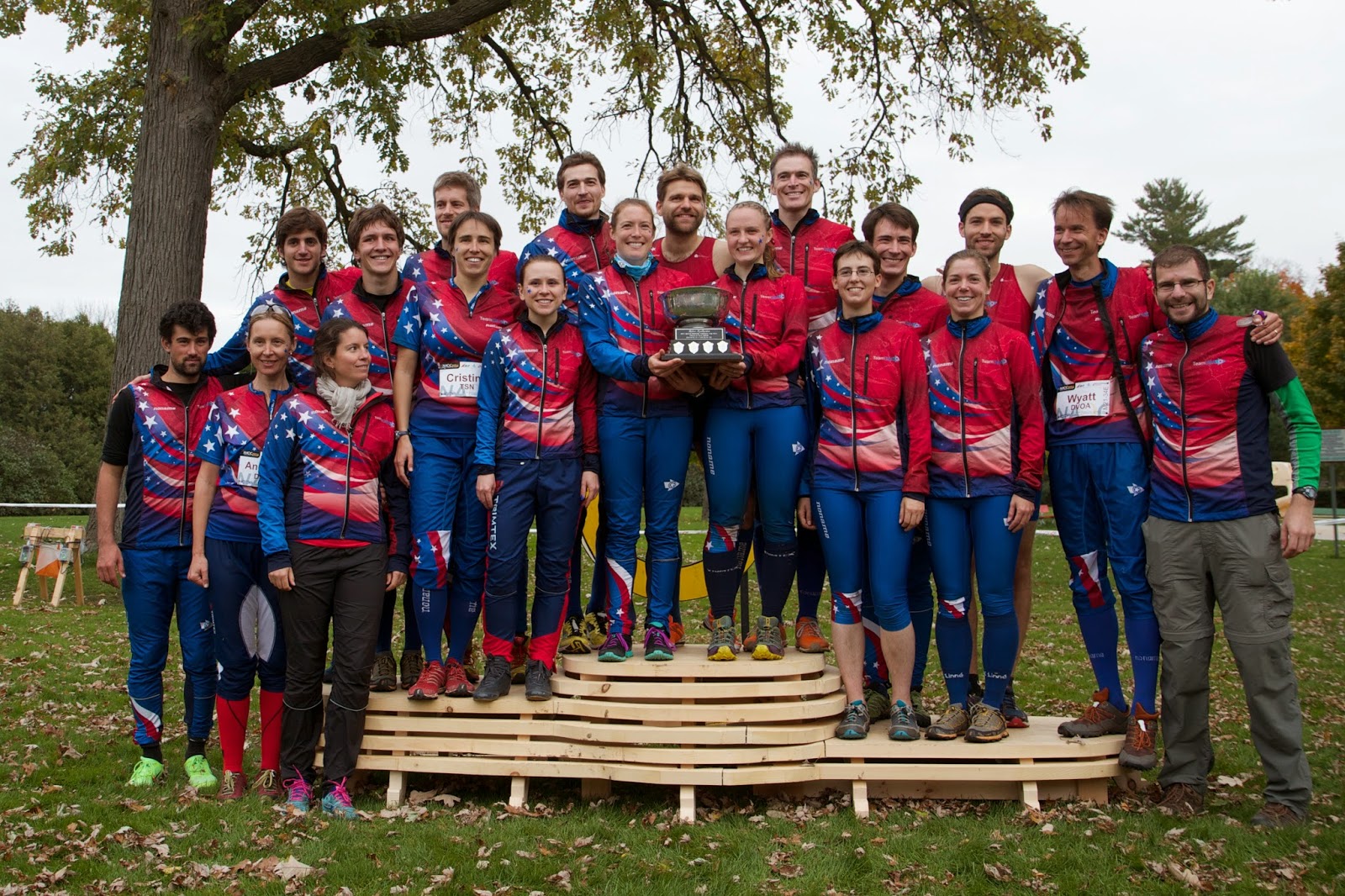 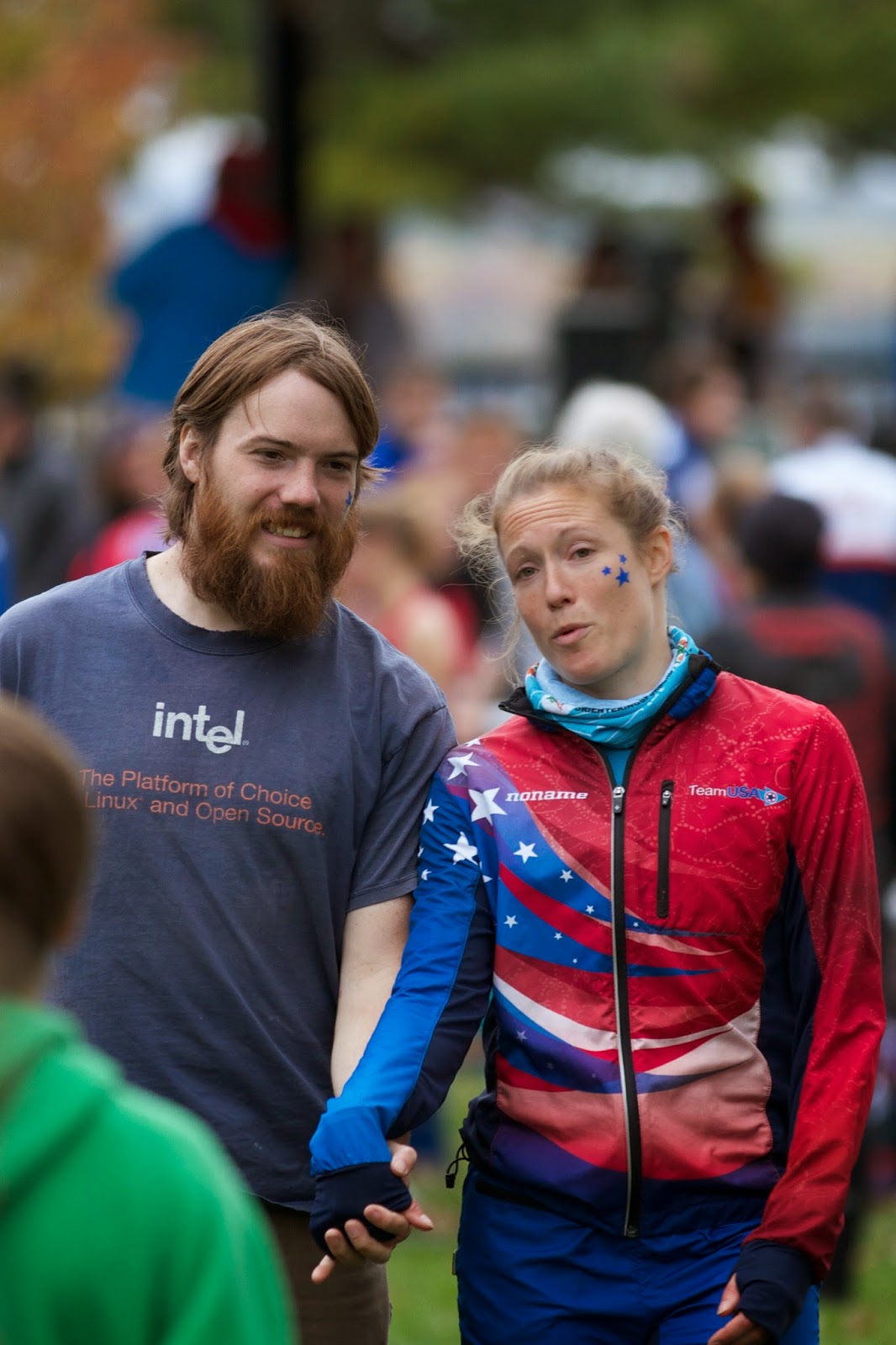 Caught in the moment, wrapping up a great weekend.