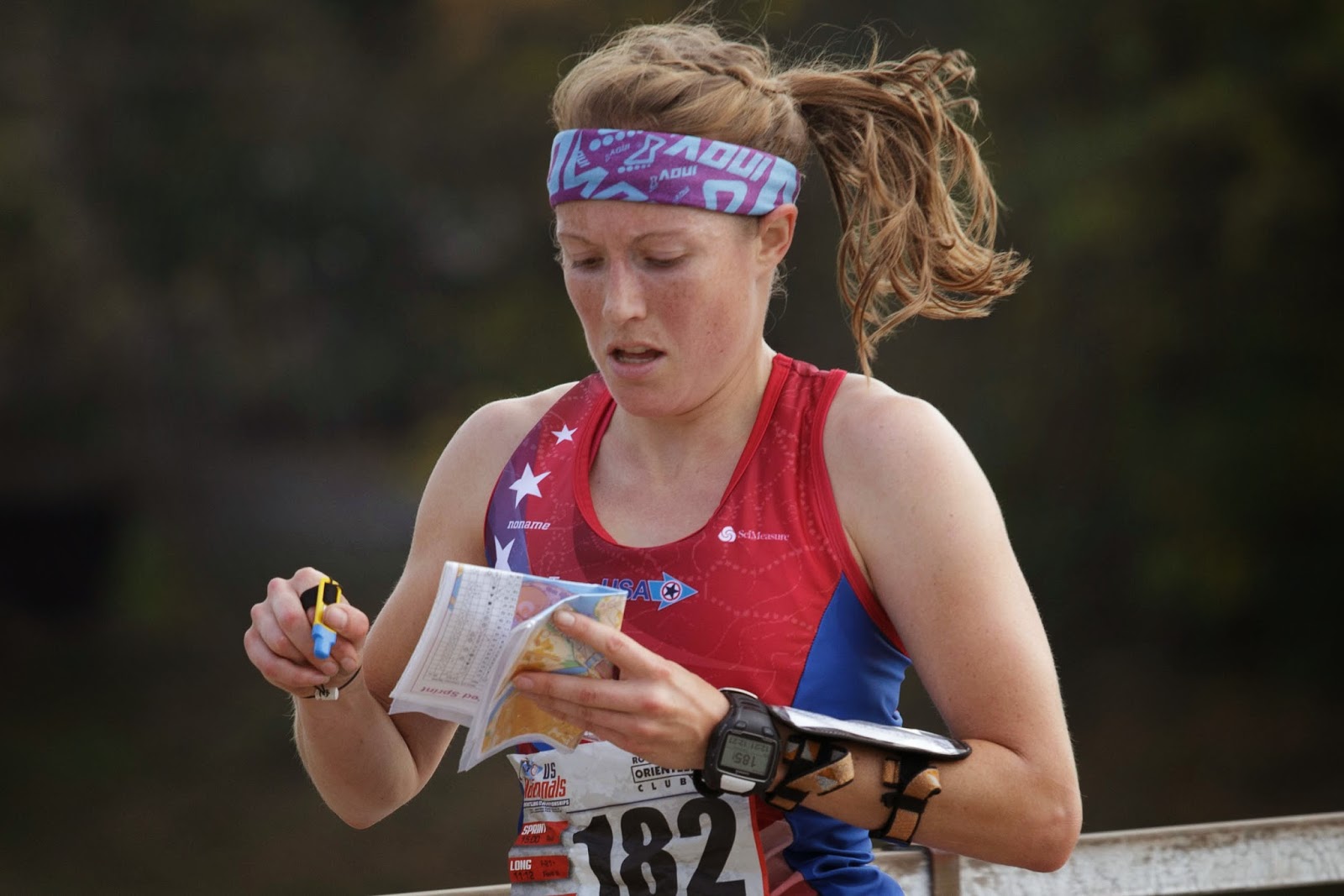 Last weekend, the Rochester Orienteering Club hosted nationals for orienteering, with a sprint at Genessee Valley Park, and a long and a middle distance race down at Letchworth.  This was great, because it not only let me compete on my old stomping grounds, but also let me see my parents and let them come spectate the races.  Even with all the technological advances, the spectating is pretty poor at orienteering races, but hey, we're trying.
Sprint Race 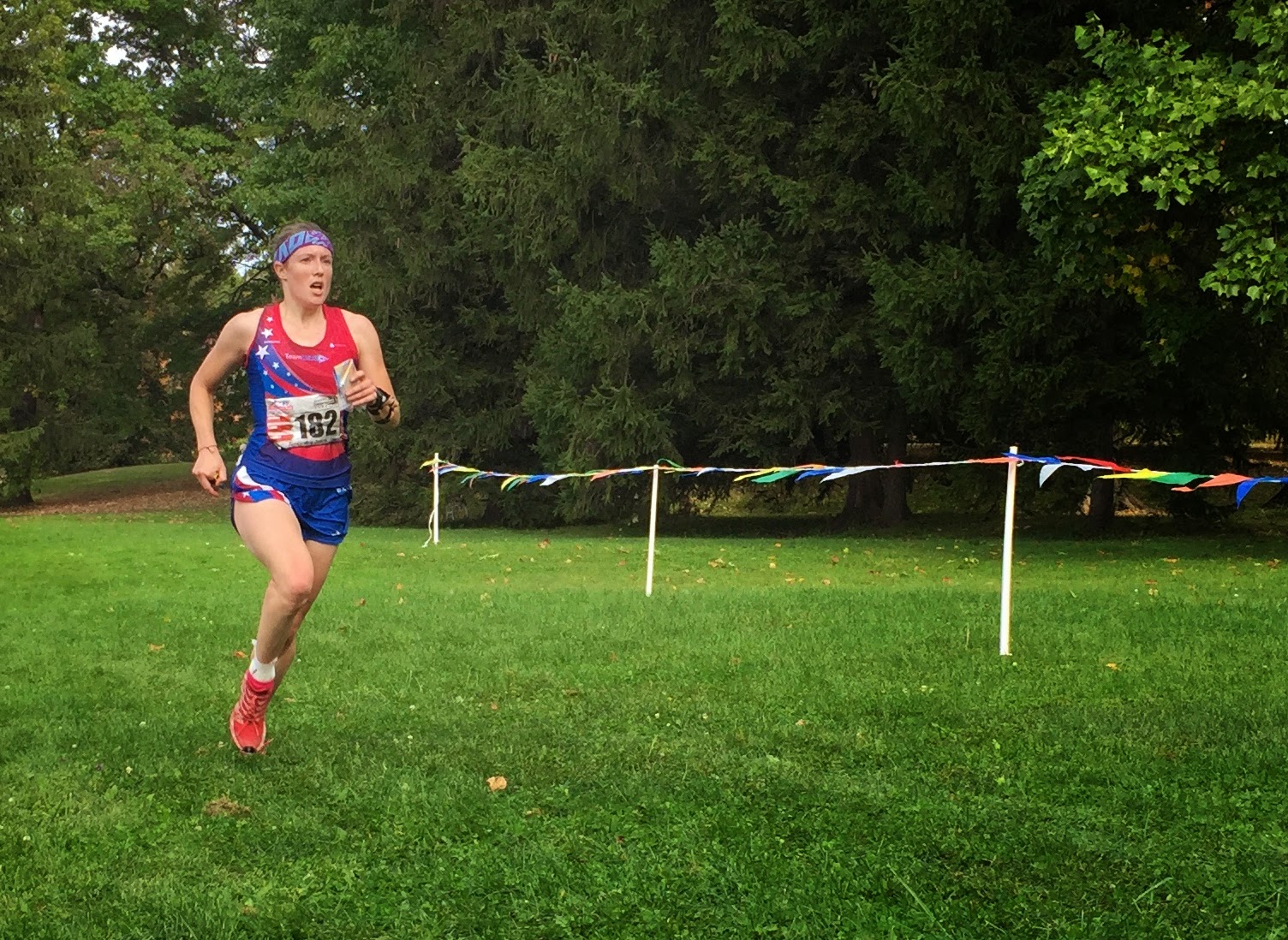 The first race was the sprint, on Friday.  I had just started getting used to the feeling of a body all full of energy from a proper taper, but that morning something didn't quite feel right, with a high heart rate and sluggish feelings in my legs.  I decided to try and ignore the physical side of the race, and just run clean, spiking all the controls and keeping my head up and scanning the terrain.  This worked well, so even when I didn't have the top gear I was hoping for, I navigated very well in the easy parkland terrain, and I was fast enough to take the win. My first ever national title in orienteering!  (ski-o notwithstanding).  This was cool. I was psyched.  Unfortunately, by that evening the weird feelings I'd noticed had developed into a full-blown head cold, sapping all that extra energy that I should have had available from my taper. Not fair! 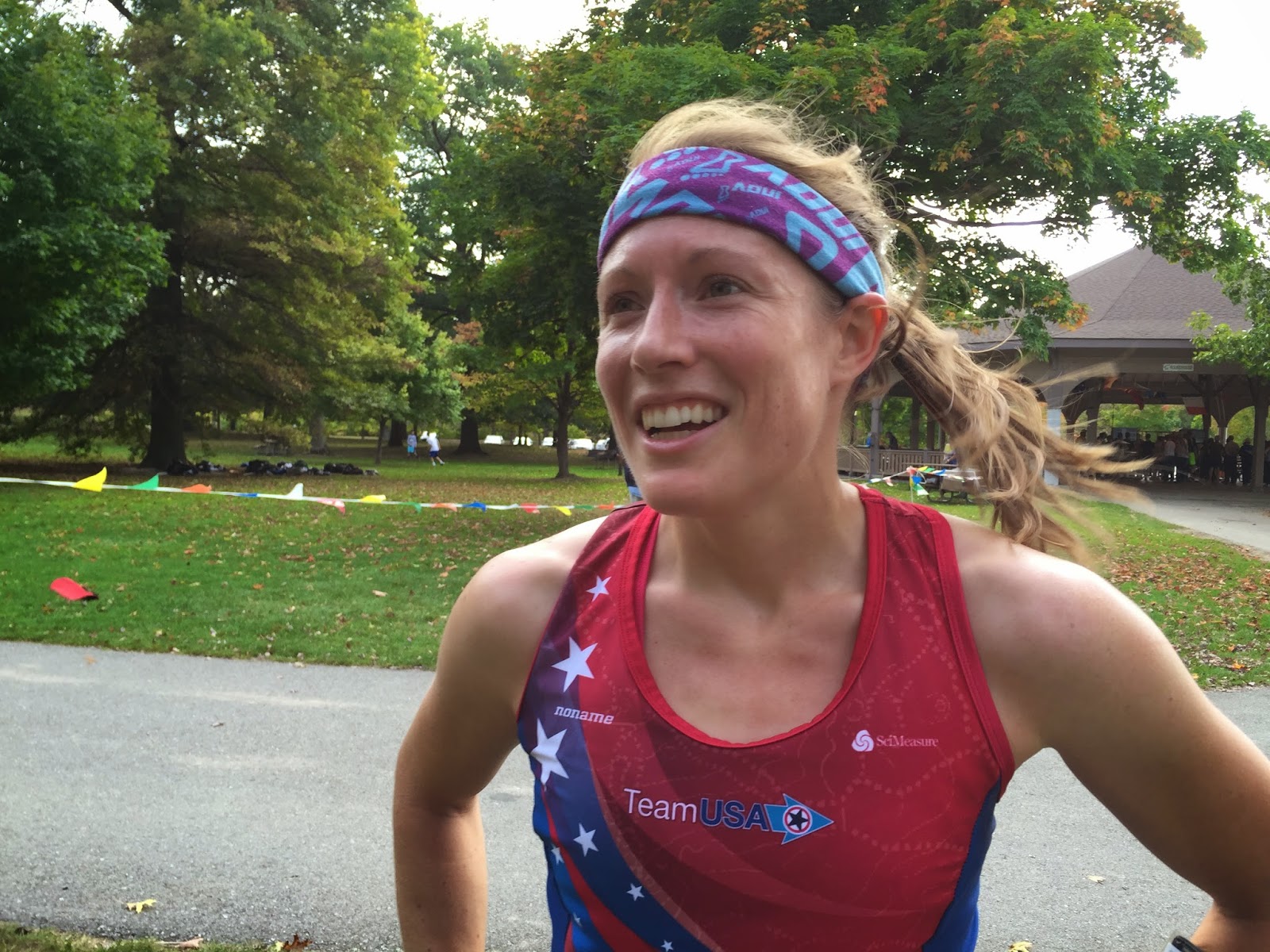 Hehe, psyched.  I'm pretty sure this photo is just after Alison finished, and I knew I was the champ. 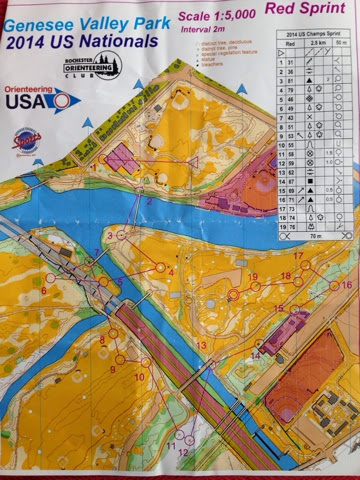 I was anxious, trying to fall asleep on Friday night.  I know you're not supposed to race with a cold, because your body is already trying really hard to fight off the virus, it's not very nice to pile on more stress from a hard race in potentially cold and rainy conditions.  I decided that if I woke up and my morning heart rate was below 60, I would race, and this gave me the peace of mind to finally fall asleep.  Morning heart rates tend to be decent indicators of overall exhaustion, so I didn't just pull that decision rule from you-know-where. 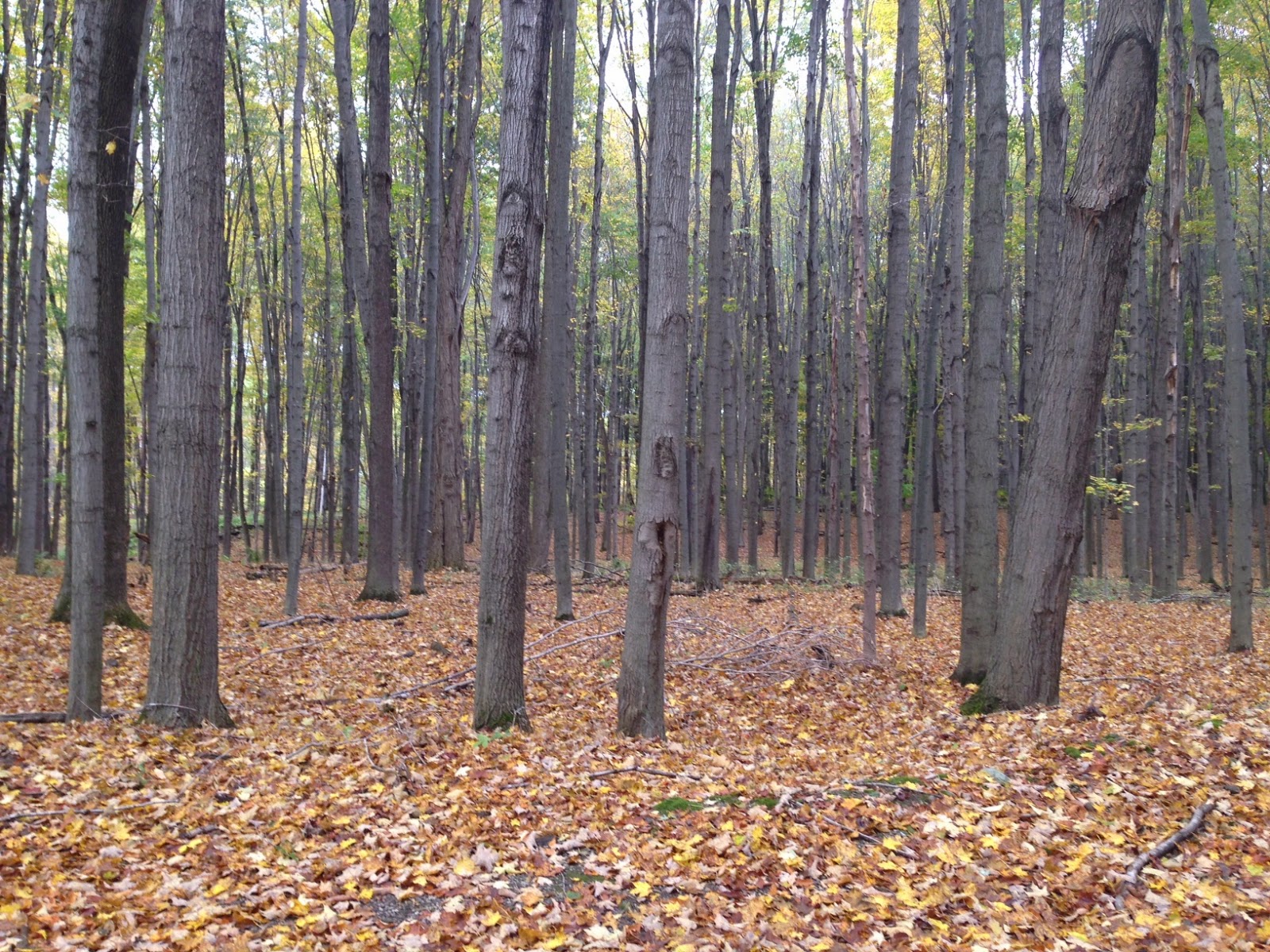 I woke up with my resting heart rate down at 50 bpm, but a super sore throat.  Yuck.  This changed my approach to the race, since I knew that no matter what, I'd be setting myself back in terms of recovery, but I had decided that I was "allowed" to race, so may as well make the best of it.  By the time I'd finished my coffee and Kseniya and her mom had driven us down to Letchworth, I was thinking I'd probably survive the course.  My git-up-and-go definitely got-up-and-went last night without me, but again, I decided to ignore the physical side, and just try to navigate cleanly.  I wasn't quite as successful as I'd been in the sprint, leaving four minutes or more out on the course in errors, but it was good enough, again.  I caught up to Alison, one of my US Team teammates, at control 5 from three minutes back, and despite two ill-fated attempts to drop her, we were together for nearly the rest of the course. I was a little distracted by this, but it was still a lovely day to be running through the woods, and I really enjoyed myself.  In the end I was fastest again, by seven minutes! Body was definitely a bit worse for the wear, but I had managed to keep myself reined in enough to not do *too* much damage. 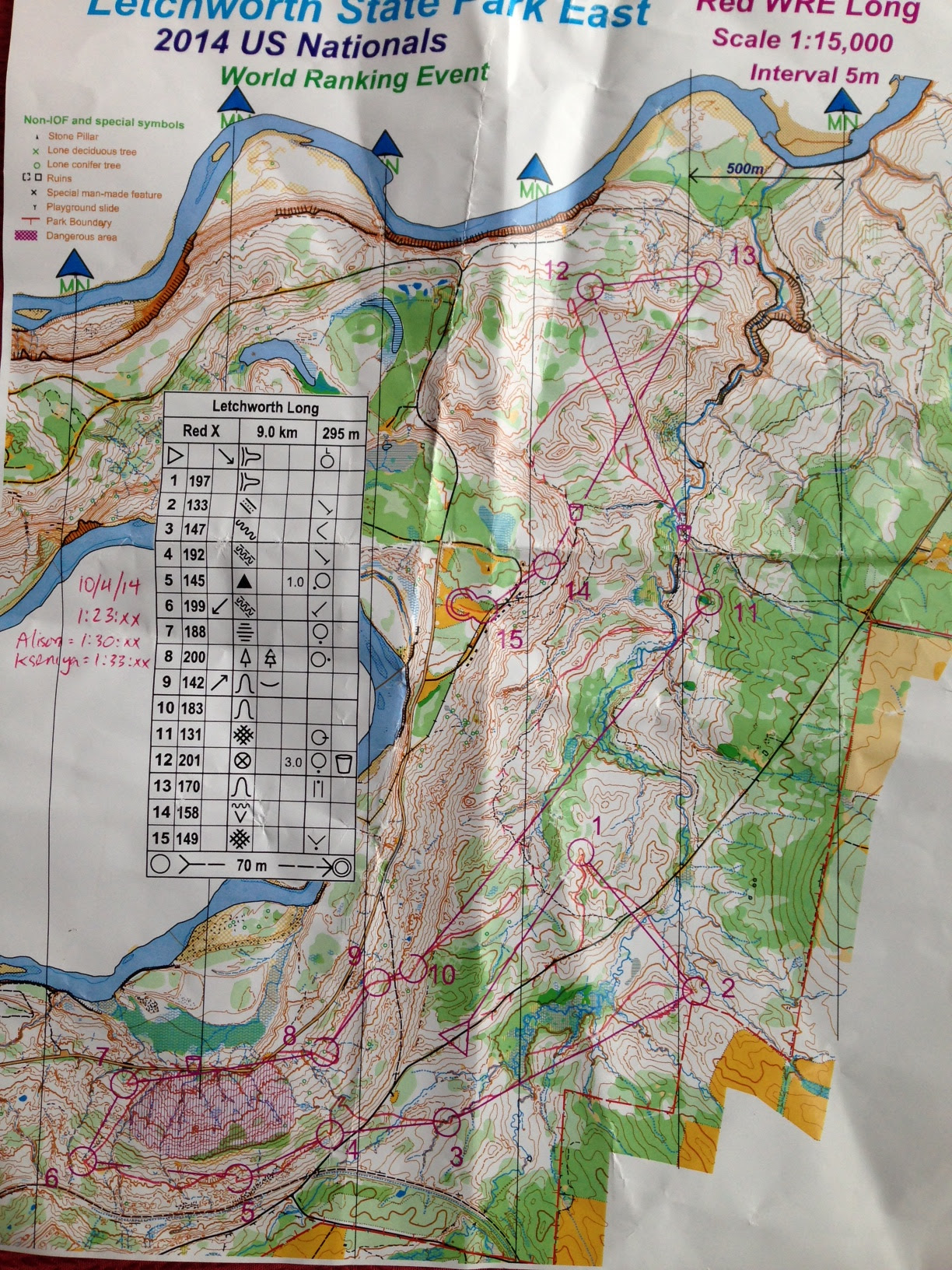 Middle Distance
One more race to go, the middle distance, and this race has been my Achilles heel the past few years. It's tough, it's technical, it's short, so there's no time to make up for your big errors.  I wanted to do two things going in to the champs - run a clean race by focusing on the process, and bring a little more rawr to the party and race with some aggression.  I really felt like poo when I woke up, stuffed up like a cannoli and coughing, but the resting heart rate was just below 60 (59) so that meant go time.  I did a slow warm up to try and convince my body that it wanted to race today, this is going to be fun!  oof. 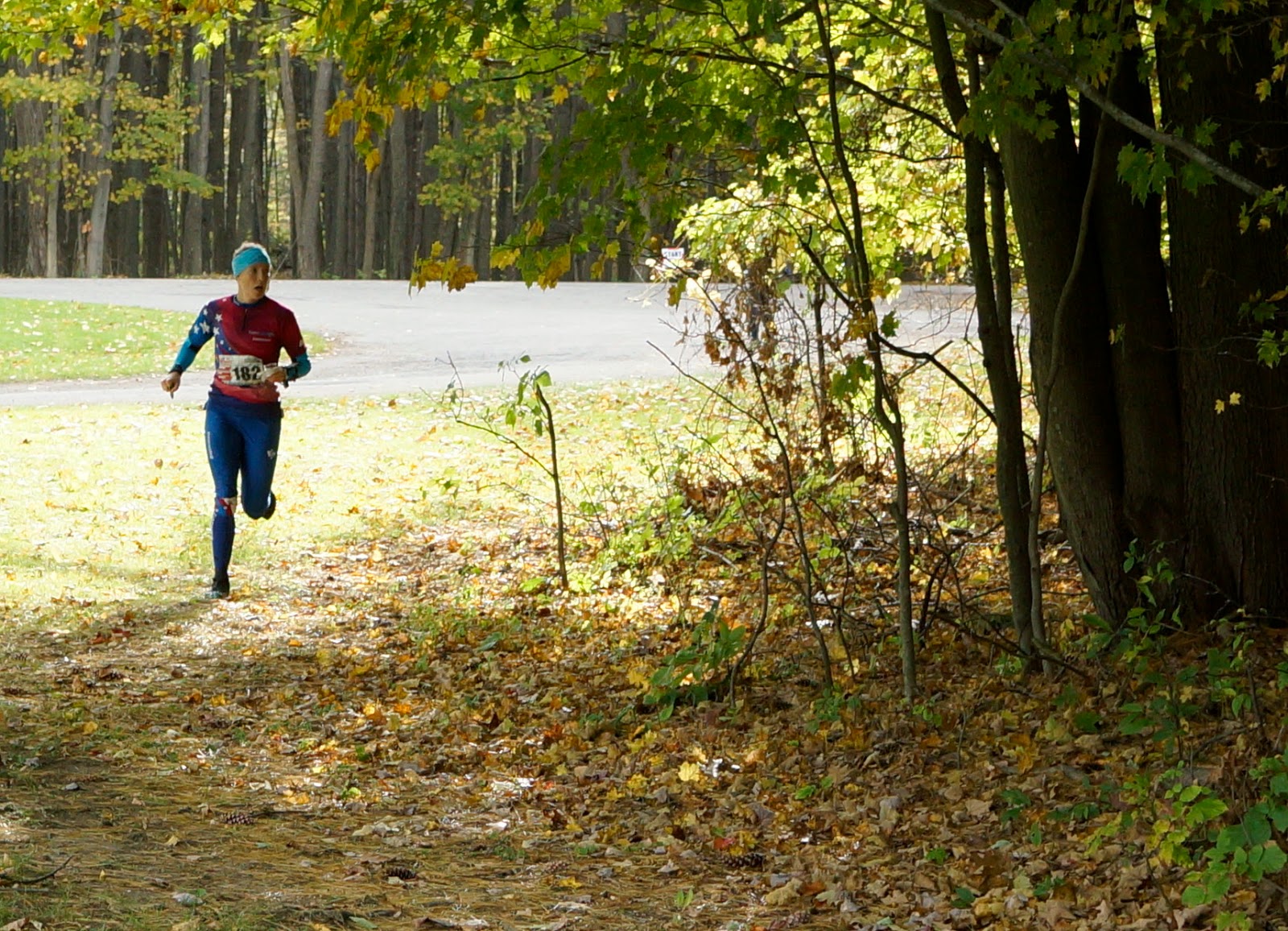 I started well, spiking the first two controls, but then I made a rookie error and lost 4 minutes on the way to number 3. Came up for air, found #4, and then I was drowning again searching for 5 with no idea where I was or where I should be or what the heck I was doing. When I finally came back up and found that control, I was pretty pissed at myself.  I knew I'd probably just lost the race, and both of those errors were unacceptable in how they happened.  Well, errors are part of the fine-scale navigation in orienteering, time to put them behind me and get on with the rest of the race, so I did that, and pretty well too, winning most of the final 12 splits.  I had clawed my way back up to third place, fueled by anger and frustration and thankfully channeling it the right way, but naturally I was disappointed with those two controls in the beginning.  That said, it felt really good to run with such aggression, and despite the huge blowup, I feel best about this race.  Next weekend, I'll be more disciplined in my methods, while maintaining the feistiness, and that'll be a good combo! 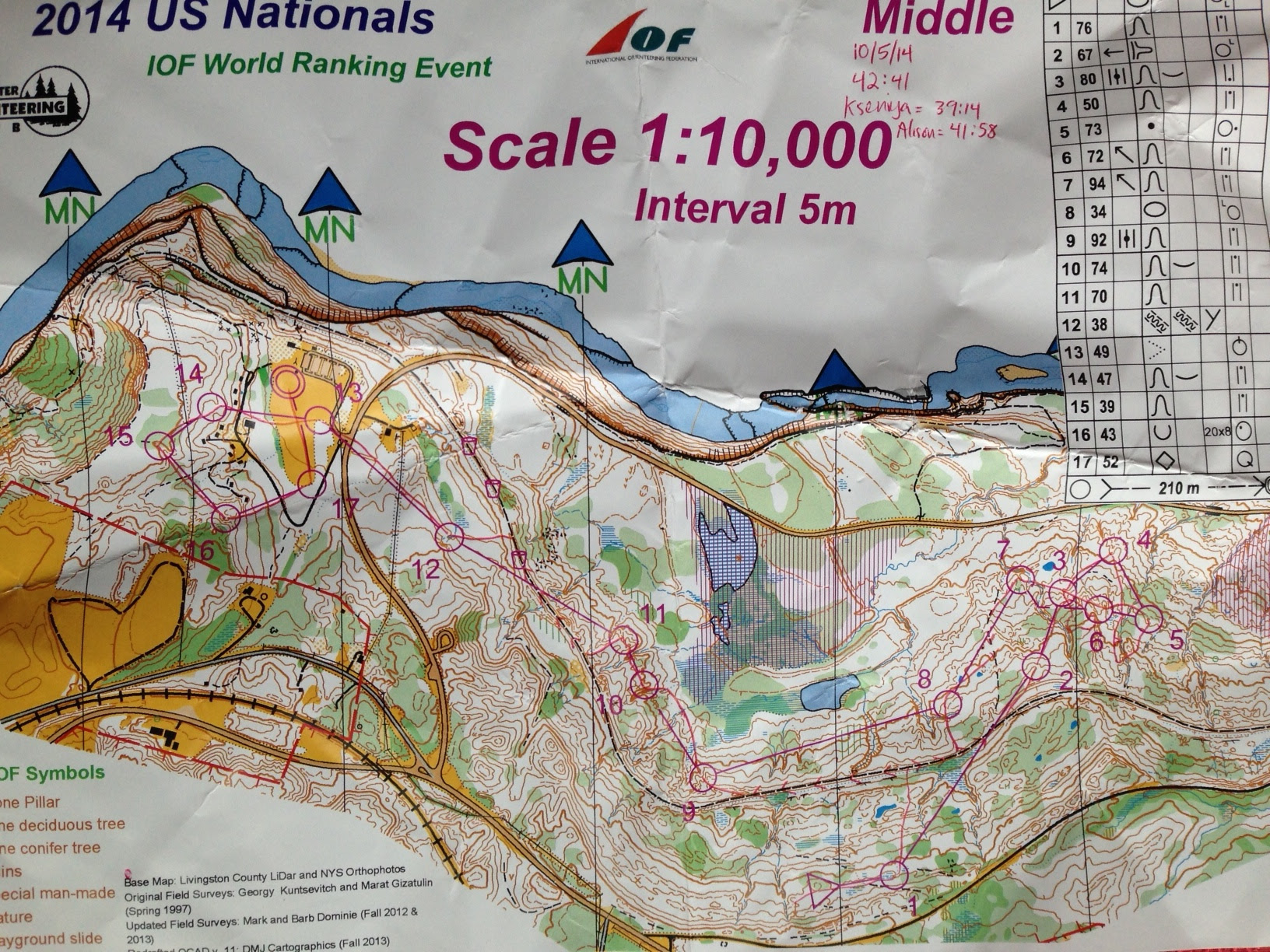 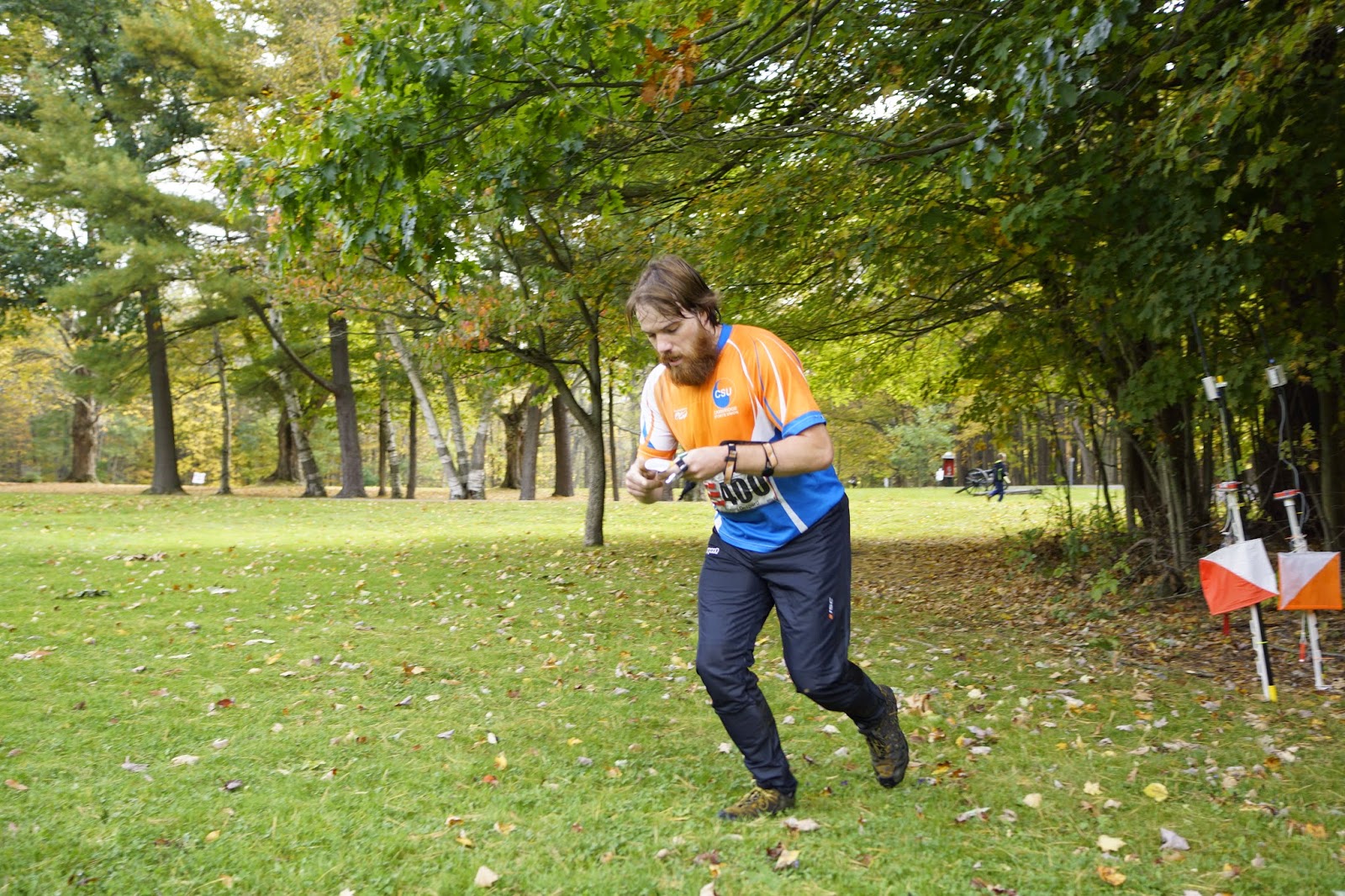 Ed on his way out to the final loop in the Middle. 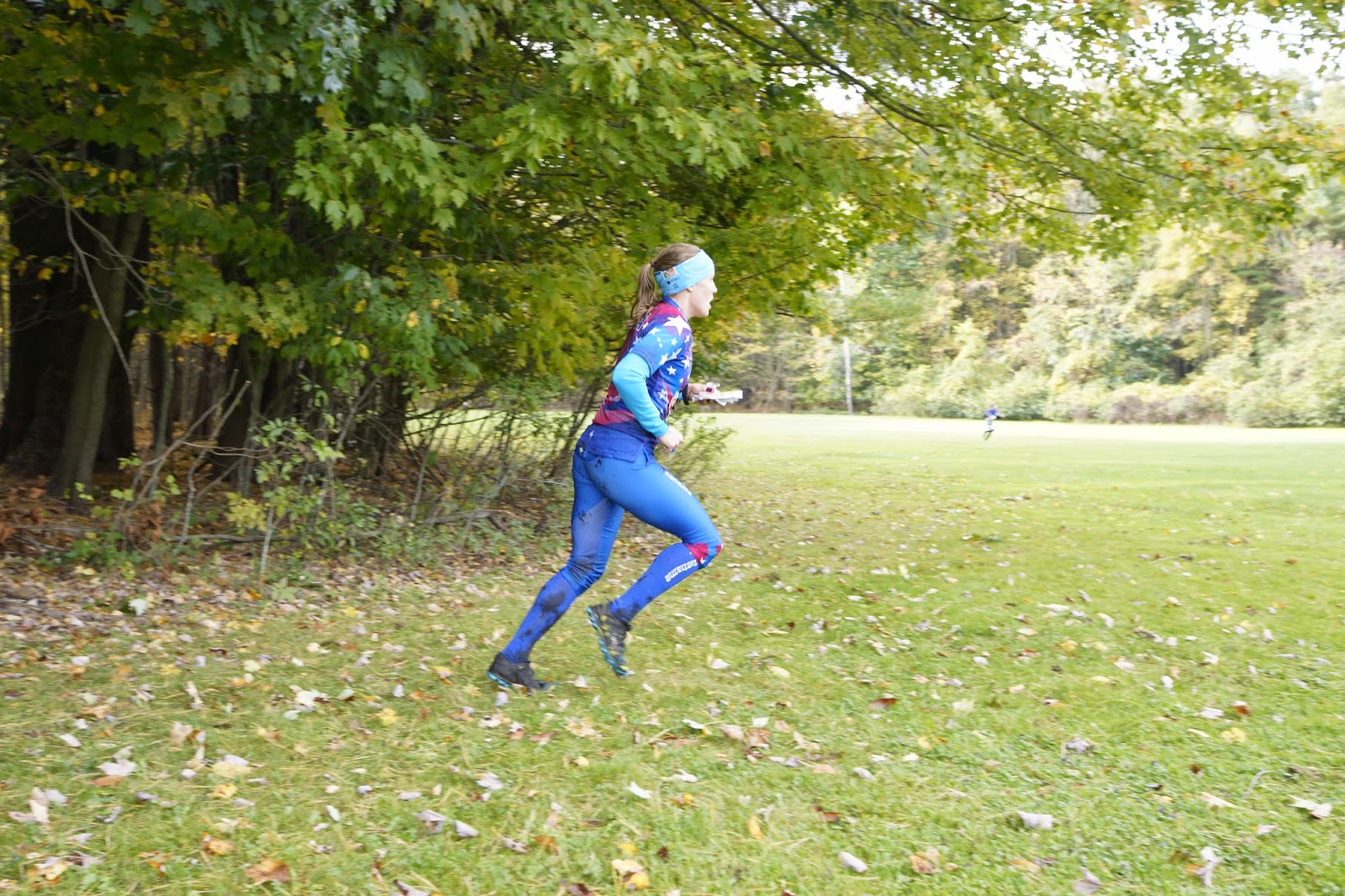 Leaving the spectator control in the Middle. 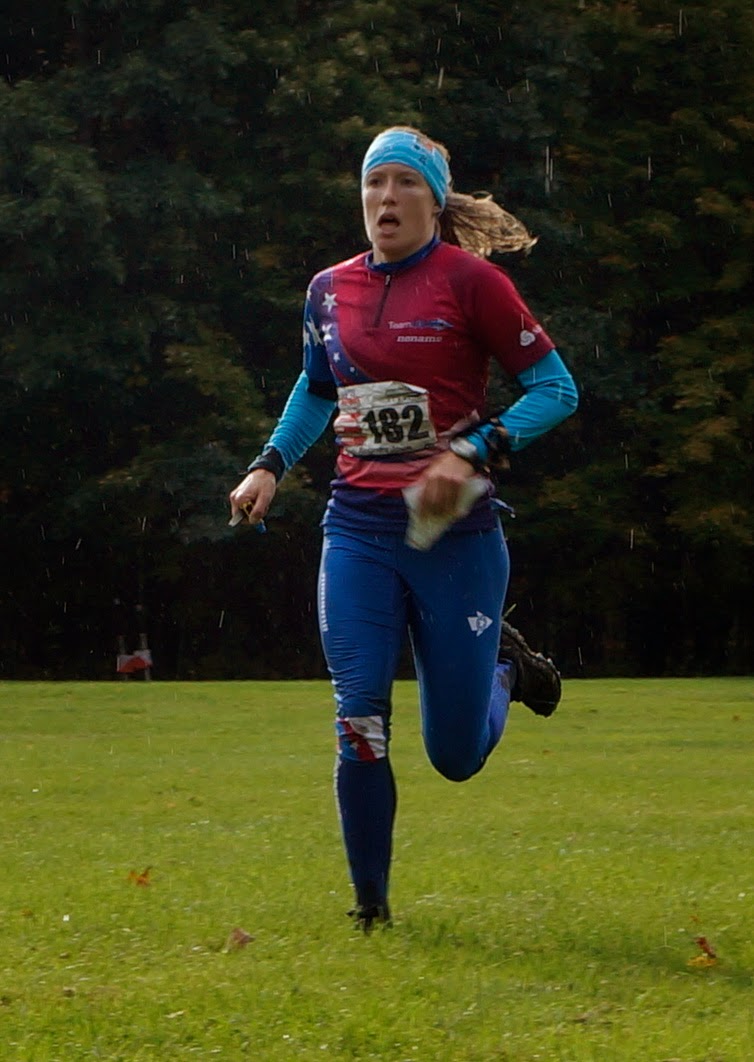 In to the finish, wishing I had a bit more lung capacity at my disposal! 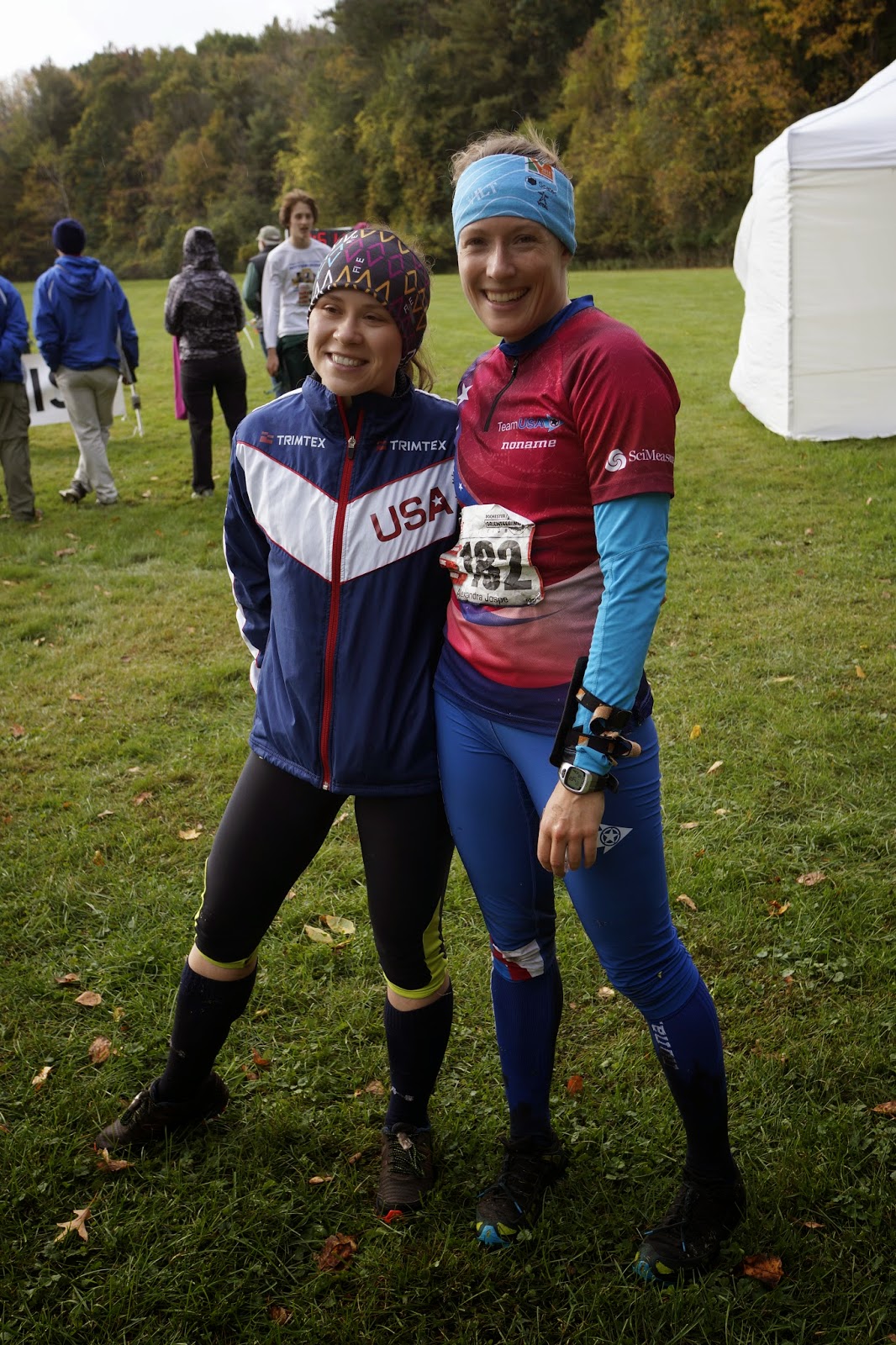 After the Middle Distance finish, with US Champ Kseniya! 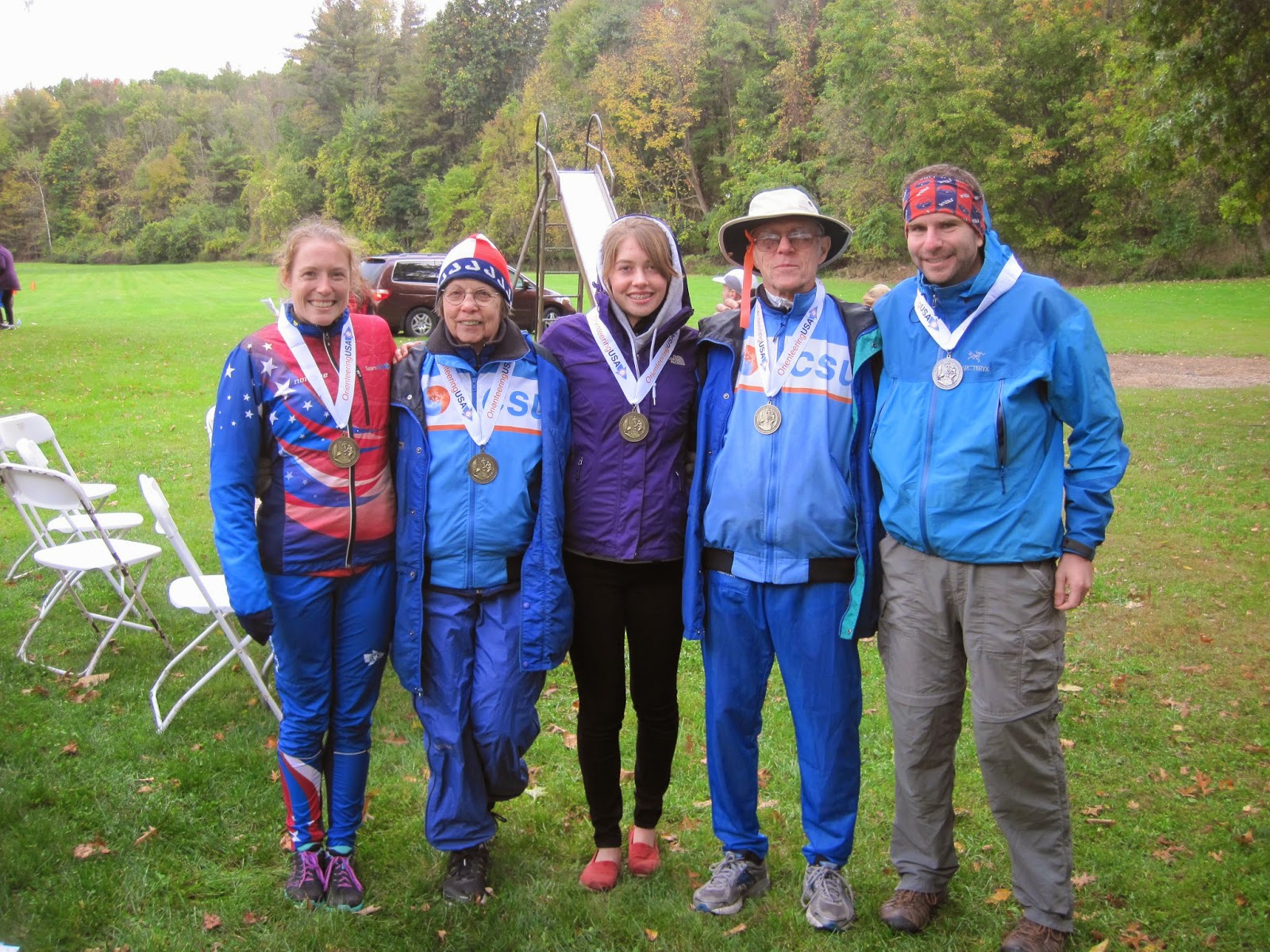 CSU medal winners from the Long Distance (missing Peter and Gail, who both won some gold medals in their age classes as well).  Go CSU! 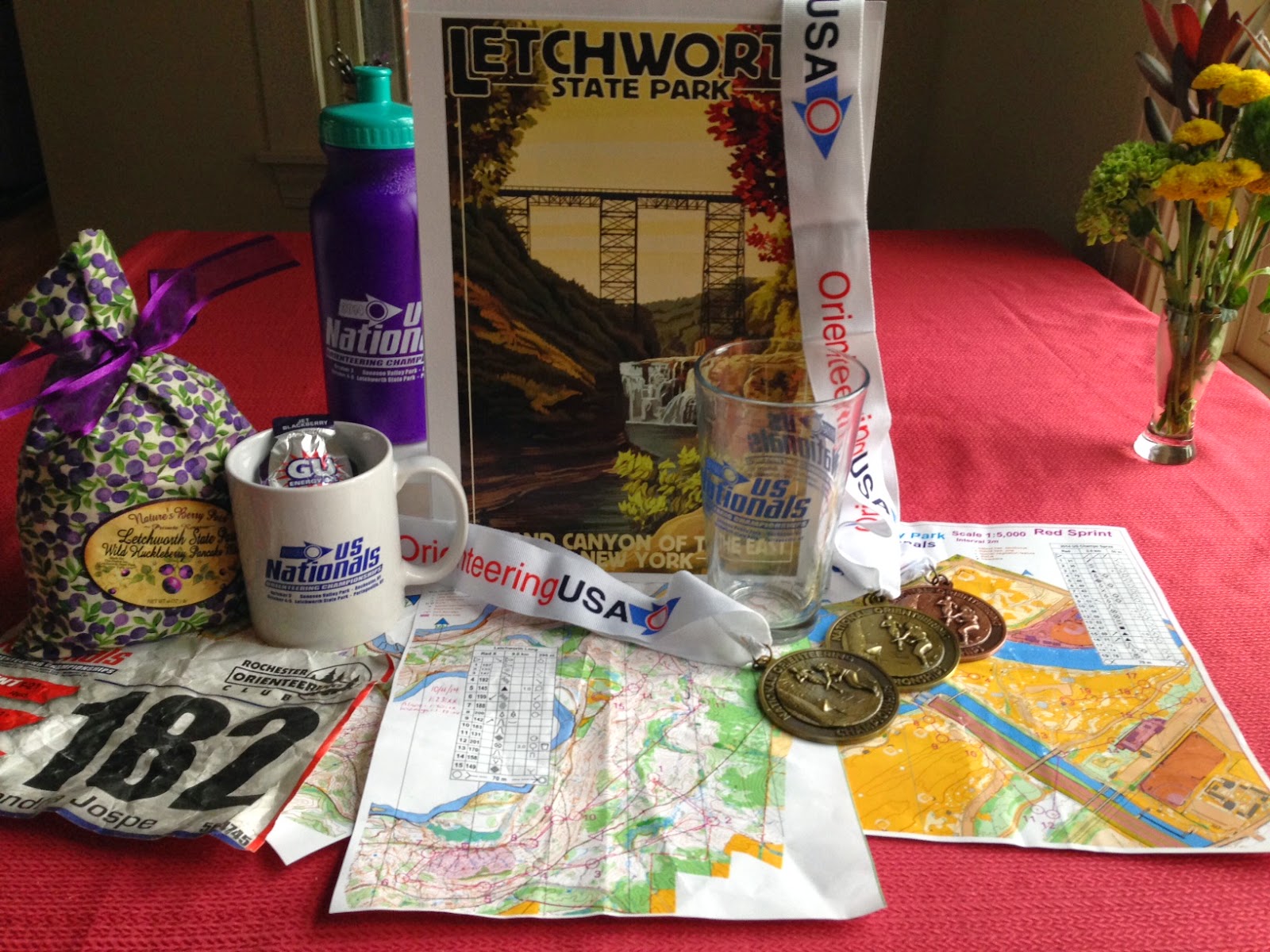 In the end, it was a great weekend. I've never won a national title in summer orienteering before, so I'm really pumped to have just won two of the races and taken bronze in the third!  It was a lot of fun to have some competition in the women's field, even though we were missing Ali, and the Rochester Orienteering Club put on a really nice weekend of racing.  Best of all, I was able to take two national titles on home turf, with my parents there to cheer me on.  That was pretty cool.

Now, I'm gonna kick this cold and bring my A-game to Canada for the North American Champs!