There isn't a huge amount of snow in New England right now. After last year's snowpocalypse, my colleagues at work all have a bit of PTSD, and my colleagues among skiers are just wistfully longing for it to happen again. So far, nothing doing, but at least we've been able to drive to our little Weston loop of the north, Craftsbury. For now, let's ignore the implications of needing to drive further and further to practice this sport.

CSU has been up to Craftsbury pretty much every weekend since Thanksgiving, in varying groups, with the largest contingent showing up for the Eastern Cup, two weeks back. I figured, you gotta start somewhere, so I signed up for the 5k skate race, since the classic sprint would be too much chaos for a coach to take part in. Easier to stay in the trenches waxing skis. The poor manmade loop of snow at Craftsbury was getting thinner and thinner as nights stayed warm, and the race organizers ultimately had to change the classic sprint to a skate sprint, with heats of four skiers instead of six, in response to the thinning snowpack. 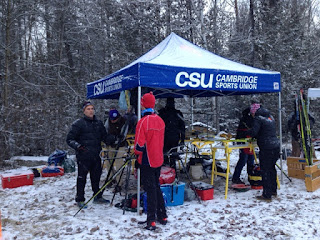 During the sprint races on Saturday, the snow gods finally heeded our prayers and dribbled down the flakes, first hesitantly and then with gale force. By the end of the day, we'd put six skiers into the heats and we had enough snow that I managed to actually go for a ski on real snow, over lumps and bumps and hills and things; such a change from that manmade concrete that we race on! 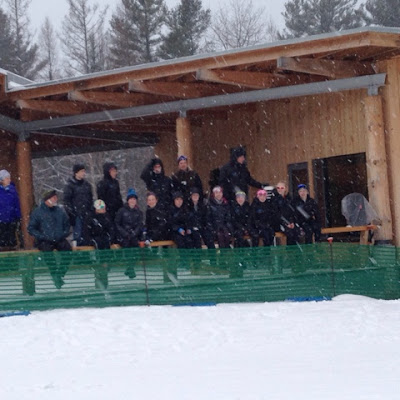 Sunday rolled around, and I woke up remembering how TIRED I get after coaching all day. But the Craftsbury breakfast delivers, and soon I was fueled up with coffee and bacon and ready to attack the day. Still a long day of coaching, but I made sure to put on that bib early, so that when a window opened up with an opportunity to race, I'd be ready! My plan was conservative - accept that my body was tired, that this was my fourth day on snow, and that I haven't been doing rollerski intervals. I knew that I wouldn't be feeling sharp, but if you don't race because you know you won't feel good, you'll never do another race. So, ski the transitions perfectly, maintain good technique, and try to ride those skis as smoothly as possible.

The course was harder than you'd think, for a flat-ish loop done five times. Smooth descent out of the start and around a corner, then up a short steep wall, around a sweeping turn to the right and back down to the bottom fields, then a smaller U-turn, to the left, finishing with a gradual hill that felt like it never ended. I started out right near the end of the good college skiers, so for a few laps I had people to chase. Each lap, I made it a game to see how efficiently I could hunt down my next rabbit, and I tucked past many skiers. It felt good. I stayed controlled on the short, steep, grunt of a climb, and tried to punch it around the wide right-hander.

Somewhere in there, I lost track of how many laps I was doing. I hadn't been focusing on that, despite reading the riot act to the kids about how only YOU are responsible for the number of laps you've done! Crap, not only was this embarrassing, it may have a very bad outcome. I knew I was somewhere between the 3rd and 4th lap, and a check to my watch made it clear that it was more likely the 3rd. I hadn't caught my 30-second girl, yet, so I looked for her green suit as I came near the lap point, saw her head out for another lap, and figured that I had two to go. Luckily I was right, but that could have ended differently. Idiot!

It's amazing how freaking hard ski racing can be. I felt like my arms were falling off, my legs were burning, and my hips were coming unglued from my body. You mean you're supposed to train for this sport? With one lap left, I tried to summon a little oomph, but still barely broke from my pedestrian pacing. Strange how a marginal increase in effort up the steep hill leads to so much more pain on the flats, but I managed not to completely trip over myself, and got to the finish eventually. It was good enough for 50th place, out of 205 women, and a better points race than any of mine last year. I suppose that's a good start, and considering there were 20 places inside of 10 seconds ahead of me, I'm not worried. There is still time to ski into this season, and it takes more than four days on snow to get the feeling back! 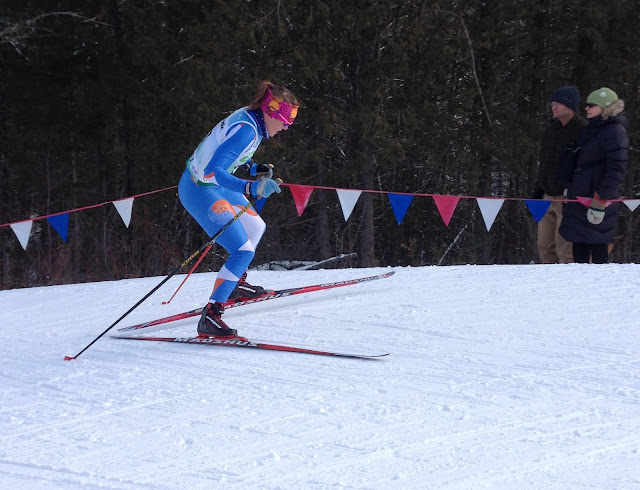 Muscling my way up the short steep grunt of a hill. Thanks to Regina Sohn, a CSU mom, for the photo. 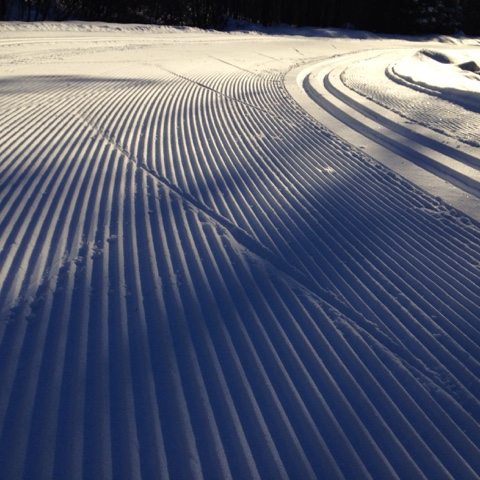 Next stop, after a week in Rochester, was a week in Quebec. We were worried about the snow conditions, but shouldn't have, as it started to snow on the day we arrived and delivered some gosh-darn-beautiful skiing. I didn't want to leave. 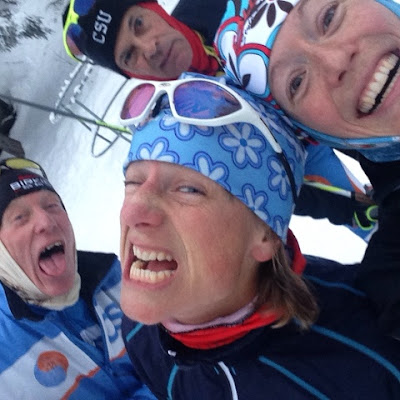 Skiing, for me, is so much about the people I get to ski with. This bunch of monkeys make it all worthwhile. 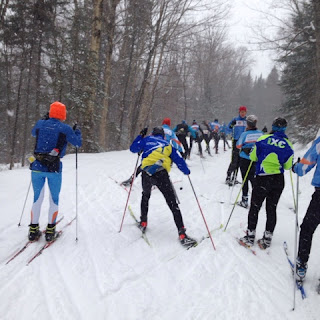 Quite the army up in Canada. We tried not to take over the entire trail, but pretty much failed. 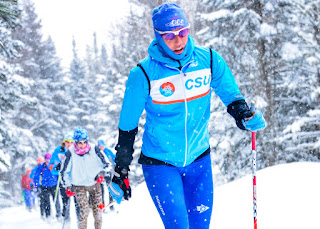 I managed to take part in the annual time trial up there. It wasn't as cold as it could have been, but I lacked the willpower to strip down to a race suit, and as such, lacked the need to go much harder than a controlled wheeze. I couldn't hang with Rob and Kathy on the classic portion, so faded back into a pack of my U18 girls to recover, finally getting ahead near the end of the skate portion, after what felt like an insulting amount of work. Managed to maintain my placing among the kids from the Craftsbury weekend, but it would be nice to feel a little snappier. Thanks to Jamie for the photo of me looking like I'm dying during my nature walk. 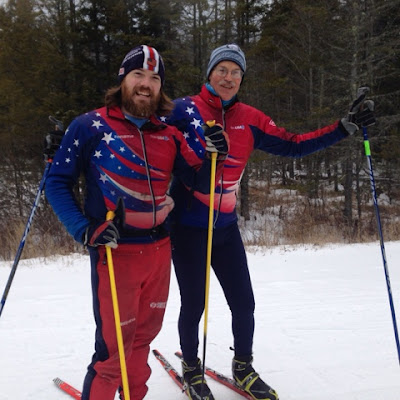 Then on to Vermont, where the ski-o community convened. Some good skiing at the Danby Rd, totally the proper way to ring in a new year.

Next up, hopefully, is the Bogburn.