I have been lying a little low since the trip to Laramie, as I mentioned in the last post. We had a trip to NJ for social/family stuff, and naturally I managed to find a road race around the corner from where we were staying. My dad and I hopped in, even though the last time he ran was the last 5k we did together in May. It was hot, still in the middle of that long heat-wave wracking the east coast, already 85 degrees at 9am when we started. 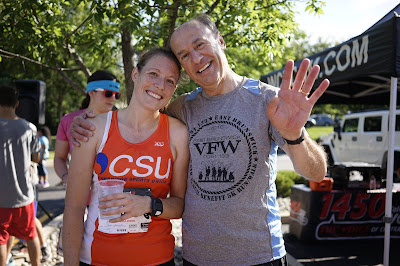 The course was fully paved, and mostly flat, on suburban streets around the East Brunswick NJ. I was touched that we started the race with an optional 22 pushups, to represent the 22 veterans who commit suicide every single day. Tragic, and I really want to think that organizations like the VFW can make a difference. It was a relatively big crowd, 300 runners or so, and some of the women had that skinny runner look. They were all tan. It's the Jersey shore, duh.

We started out, under the fire engine with the giant American flag, around the fire house and off into the wilds of the NJ suburbs. Things were shady for the first mile, and I tried to stay relaxed, watching little kids, overweight dads, people pushing strollers, and girls with ipods pass me by. I had a relatively big week of training in my legs, and I didn't need to take it out that hot. As I settled into my pace, roughly 6:25min/mi, a lot of them came back to me. I could see two girls pulling away out front, one with very long tan legs, and the other looking like a crossfit fanatic. I tried not to let it bother me. On a hot day, there's not much wiggle room with pacing, and there are a lot of women out there who run a lot faster than me on a flat road.

We exited the shaded streets and hit the sunshine around 1.5 miles. I still felt comfortable, but without any breeze the temperature was starting to be noticeable. The two girls ahead of me looked comfortable, too, but they weren't pulling away. I'd moved ahead of all the ipod-wearers and stroller-pushers by 2 miles, and the girls were closer. I could feel my breath steady and strong, and focused on my arms for a bit. When I brought my attention back to the road, I'd just about closed the gap. I went through the water stop more efficiently (not to drink, but needed to get some cold water over my head!), and when presented with an ever-so-slight downhill I let gravity take me past both of them and out into the sun of a wide road. 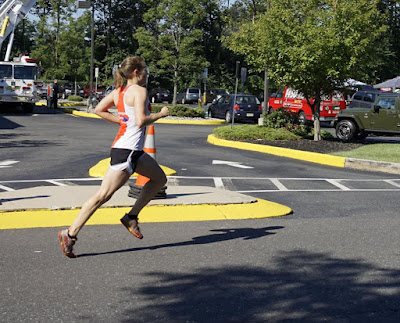 The last mile was pretty rough, as expected. Full sunlight, no breeze, and a very slight uphill. I tried to stay steady, and reeled in a couple highschool boys and some middle-aged dudes. Turned the corner and knew I was nearly there, but the heat was affecting me now, and I had goosebumps and the threat of a heat-stomach rebellion. I let myself relax the pace a bit, just a bit, to just finish the damn race without shitting myself, but of course after the fact I'm wishing I hadn't done that. I was in a bit of no-man's land as I came in to the finish, and tried to kick a bit for my mom, who was standing by the finish cheering me on. Finished in an unimpressive 20:15, but at 85 degrees, various race temperature calculators tell me that was a 19:35 effort. Sure! In any event, it was enough to win the race, 19th overall. My dad did well too, taking a minute off his May time. Speedy old fart!
Results 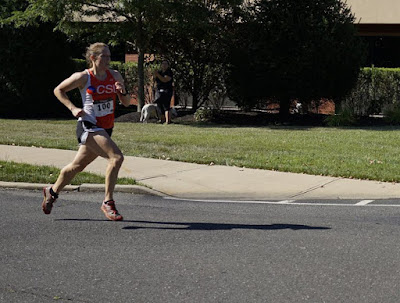 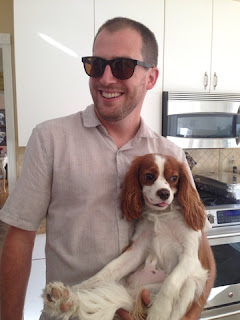 The reason to come to NJ in the first place! Christophe and his puppy Hudson 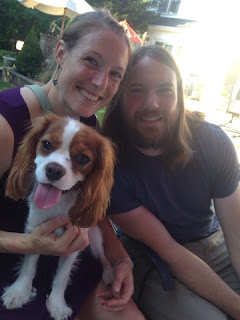