Anyone who knows me knows that I'd much rather be running in the woods than sitting around resting. But, that's the name of the game as you head into the big competitions. Things have been looking good lately, and I've been trying to use my not-training time to work on my head. With clear focus being such an important part of orienteering, anything you can do to summon calm and deliberate moves in the face of adrenaline is important. Enter daily meditation and as much yoga as I can stomach, which has the added benefit of stretching out some really tight muscles.

I had a few good sessions two weekends ago with Ethan Childs, a US Team member who is spending the summer in Boston working with Barb and her Navigation Games program. It's cool stuff, and I'm happy to have another elite orienteer around to push me. We headed up to Pawtuckaway with Barb and Walter, one of her juniors, for a solid day in the woods. After hanging some streamers, it was time for intervals, and it was so much fun to run fast through the woods, head to head with other athletes who are really pushing you. I did beat the boys on at least one interval, but also had a hard blow-up on the fifth interval. I welcomed the big mistake, because if I'm not pushing my navigational boundary, I'm not getting better and honing the edge of my abilities. 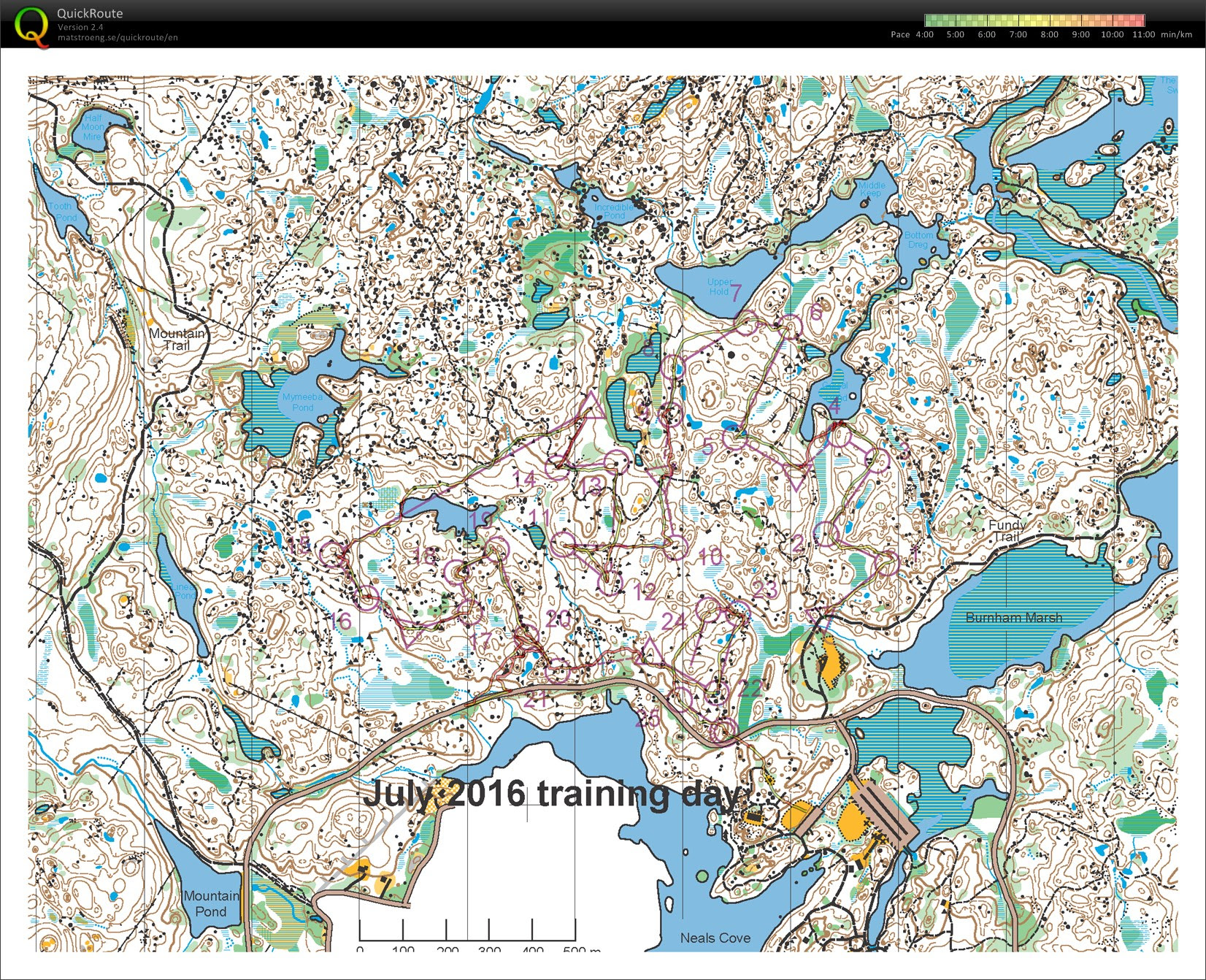 The next exercise we did was a make-a-plan training, exactly what I needed. I find that I am generally quite good at the first 90% of the leg, running confidently to the edge of the control circle, but once there, I haven't made a clear plan for how I am going to find the actual flag. One of the things I was heavily emphasizing this weekend was visualizing myself nailing the control. When I do consciously make a plan to find the control, I am brilliant. When I fail to make a plan, things spiral downhill fast. So, this was a very apt training to do, and quite challenging at times. 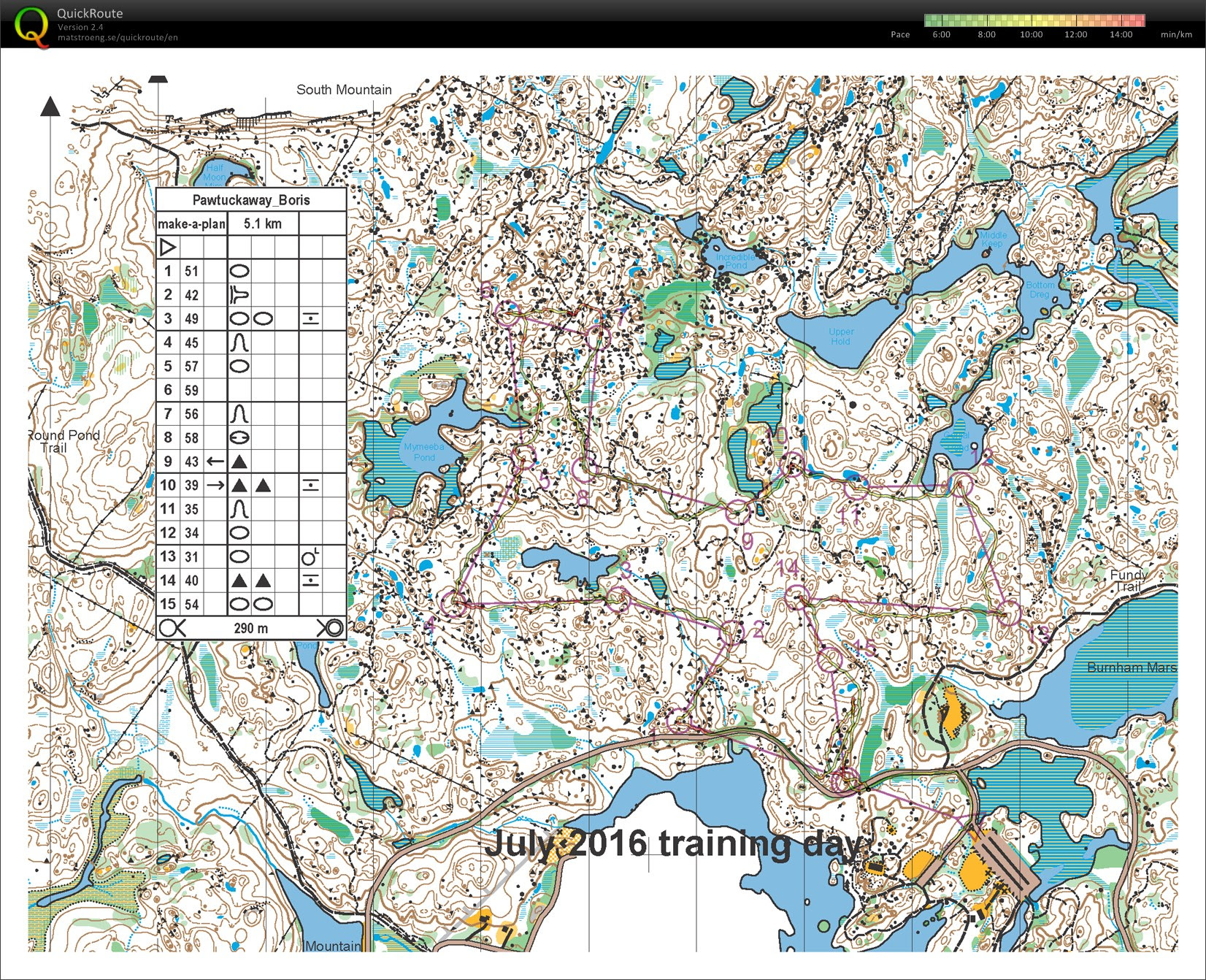 Ethan ended up shadowing me for most of this exercise, which can be very helpful, as I rarely have a coach actually observing my technique in the forest. Click for the full-sized map.

The next day, Ethan and I headed to Townsend. The heat wave finally broke, and we were running in the rain, which was just so welcome. It felt so good to be running and NOT be dying of heat! My coach Boris had designed a long training, with the idea of changing pace from long legs to short legs, and Ethan and I ran together, which helped me practice my focus and my plan-making. There were parts of this exercise where I was brilliant, and there were some sections that were quite a bit less impressive. As my last big training weekend in the forest, this was a very productive one, and boosted my confidence greatly. 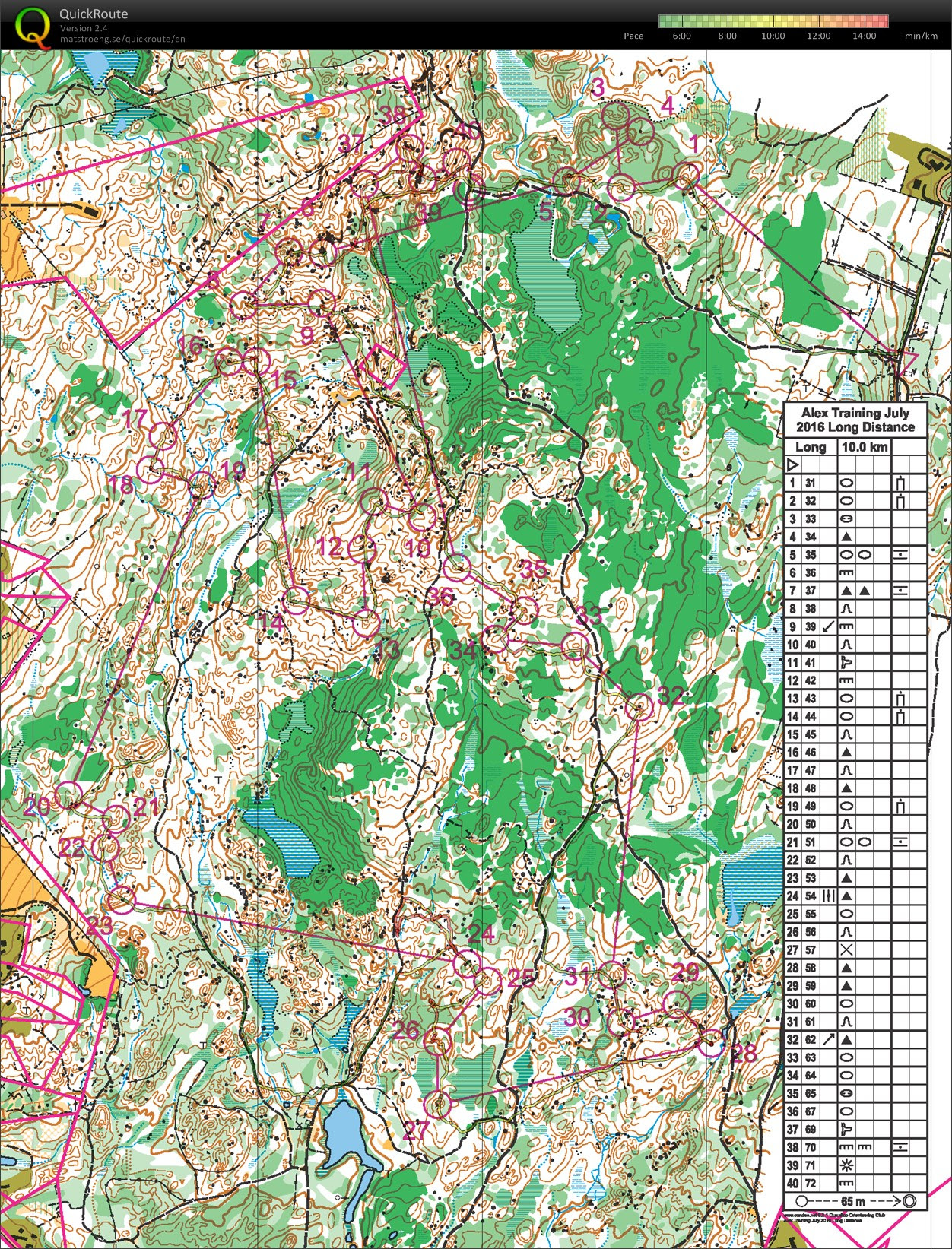 So, final training weekend over, I wrote off July as a very productive month. Every indication is that I am in good shape, recovering well and responding to intensity, and my confidence in my navigation is high. I was in great spirits as I entered a recovery week, starting the taper to WOC. So naturally, life decided to throw me a couple loops. The first could have been a lot worse. I was coaching on Comm. Ave, a location that we deem "safe" and good for beginner rollerskiers. I guess familiarity breeds complacency, because I was descending the hill mid-workout without paying much attention, probably looking behind me and talking at the same time, and I tripped over something, maybe myself, and hit the ground pretty hard. D'oh! I was lucky that the only damage was road rash, on my outer thigh, opposite hipbone, and ankle, but the gravel had gouged some good rips in my thigh. 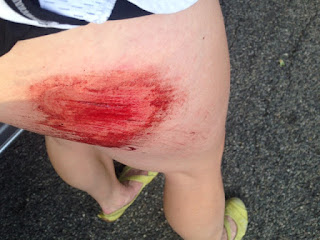 Could have been a lot worse, but the deeper cuts have taken over a week to close; the whole thing was still oozing three days later. More of an annoyance than a real setback, but it really slows your daily roll when you have to keep changing bandages!

I had to push back my planned Thursday-morning intervals that week, because I didn't trust the bandage to stay on at that point, but was confident enough in my bandaging skills to head out to the woods on Friday morning. Unfortunately, that was apparently the same morning that the lady with unfriendly dogs chose to go walking in the same forest. We met on my first interval, and her little yappie dog ran at me angrily, so I stopped and made threatening noises at it. Undeterred, the thing ran up, and probably because I really didn't think it would actually jump at me, it leapt at me and bit my ankle, before I reacted. Naturally, this was the ankle I had cut two days ago in my rollerskiing incident. I proceeded to kick the little brat about 10 feet, and began ripping into its owner. She was contrite, and managed to get the beast back onto its leash, but I was livid. I don't care if strangers are running or walking, if your dog is going to bite them, you ought to keep it on a leash.

Let's just say I've been looking both ways a couple times before crossing the street since then. Some bad luck can be avoided!

Saturday I headed over to Connecticut for my final long intensity work before I leave for Sweden, at the People's Forest trail race. It was hot and muggy and I could feel the work in my legs from the day before, so I didn't set any records. Still good to get in some vertical and some speed over technical trails, but it was a little disappointing to be slow. I still ended up as the second woman, and 13th overall, but I'd been hoping for a bit more oomph at my disposal. Results. That said, running at 78 degrees with a 75 degree dewpoint has never been my forte, and my intervals the day before (after the dog bite incident) were top notch, so I'm considering myself still on the right track!

From there, it was up to Vermont for the rest of the weekend, amidst the onslaught of all the cousins for "grammy camp". Great to see all those cousins, and to meet the newest addition (I have a niece!), and to hang out in the comparatively cooler environs by the lake. 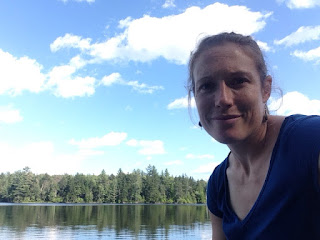 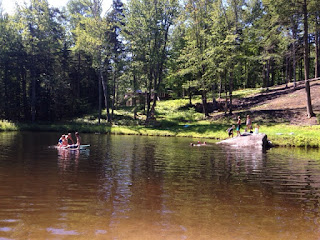