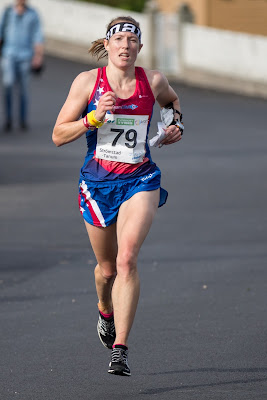 I sit here in the team cabin, one of the only ones awake right now, listening to rain and the receding peals of thunder on the morning of the long distance final. The weather has been gorgeous so far in Strömstad, a welcome break from the painful heat waves of the east coast US, but it seems that now we're in for a wetter day. The long distance race has been the one I've been most focused on this year, and I don't have the right words to describe what I'm feeling right now, so I'm going to talk about the sprint race from last Saturday.
I arrived in Oslo on Thursday morning, and met up with Hannah, a fellow runner, and Cristina, our team leader who lives in Norway. Cristina is a fantastic team leader - organized, to the point, and a great sense of humor. We couldn't have asked for better. She also comes with the cutest team mascot, her one-year-old son Lukas, who visited us over the weekend. Anyway, Hannah and I did some sprint training in Oslo, and then we three headed down to the Swedish border and Strömstad to meet up with the rest of the team at the Daftö camping resort, which is very much pirate-themed. Unfortunately, this is the end of the pirate season, so some of the pirate-themed amenities are no longer available. One more day of training at the sprint model, and then it was time to go for the sprint qualification races! 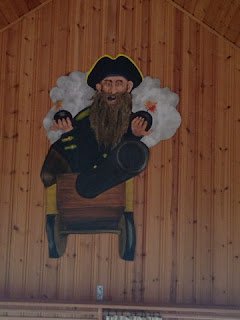 For example, this guy is painted on our cabin's wall. Yarrrr!


There are three heats of racers, and the top fifteen runners from each heat advance to the final, held later in the day. So, from the beginning my goal was to advance to the final. To do this, based on past results it looked like I would need a very good, if not perfect, run - generally the 15th place qualifier earned about 1000 world ranking points, and I had a few races in sprints that have been close to that, but only one that exceeded it. So, it would take a good day, but I was definitely a contender. 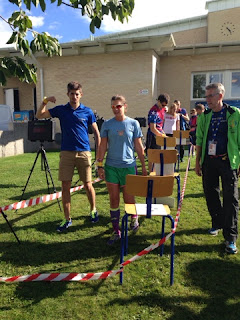 Team USA at the technical model, checking out the touch-free punching, the call-up routine, the flavor of the aid station drinks, all sorts of fun stuff. 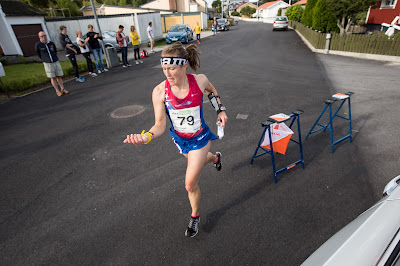 Checking for the flash on the touch-free EMIT timing chip after punching a control. Two feet off the ground!

As I warmed up, I could tell that I had nailed the physical taper - my legs felt great. This would probably gain me 2-3% in speed, so all I had to hit the navigation. My goal was to run smoothly, focusing entirely on the execution of each leg. For the first 10 controls, I did that to a T, reading ahead 1-2 controls at a time so that I could flow through, but not so much that I'd confuse myself. The course wound its way up through the town, and then with about a quarter of the distance left, it was back down into a garden, and a final climb back up to the arena.

Unfortunately, my focus wavered, and I missed a small gap in hedges while rounding a building to the 11th control. That was ~8 second mistake, not game-ending but I knew not a good thing. The little bobbles were starting - I had to check a few times on the descent to 12 that I could get through a gap in the houses without hitting any out of bounds areas, and that took time away from reading the final few controls in the tricky little garden. With lots of out of bounds areas, you had to make sure to take the right path, and I was hesitating a lot. I came to a full stop four times in that garden, with a 10-15 second mistake on #15, as I overran it. At 16, I was faced with the final route choice, and I panicked, having not read ahead to this at all. That was a total rookie error, but I chose to go to the south, and to go straight over the hill rather than to zig and zag a little bit and save myself some climbing. That was the wrong route, and cost me another 10 seconds.

I tried to hold out some hope as I pounded into the finish, but I knew that I'd lost too much time in those final controls. I ended up solidly in the bubble, and on the wrong side of it, by fifteen seconds. Of course pretty much anybody can find fifteen seconds of hesitation or mistake in a race, but it doesn't make it any easier to know your day is over. I headed out for a long wallow-jog in the afternoon, to avoid rubbing any of my disappointment onto other team members. It was not a stellar day, as none of us made it through to the final - we're definitely missing Ali's presence. In the end it was a 955-point race, 18th place, and 15 seconds too slow. 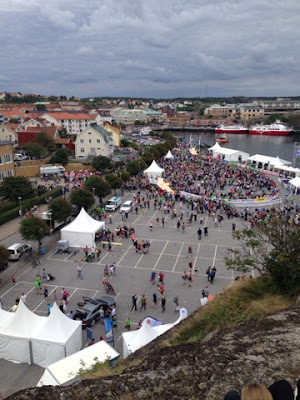 View of the sprint final arena. I'd obviously rather been seeing this through tunnel-vision as I raced through the arena passage. But the view wasn't bad from the top of the cliffs. 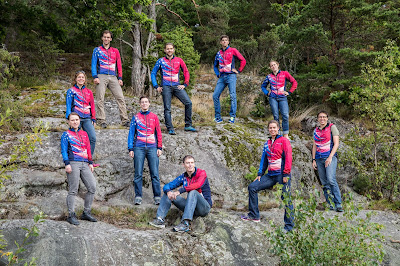 I was not slated to race again until Thursday, in the long distance. I cheered loudly for my teammates in the sprint relay and the middle distance final, and was brought to tears when Emily Kemp, Canadian runner I used to race against when she was a junior and still living in Ottawa, nearly won the race, landing in fourth place after a riveting battle against the perennial Scandinavian and Russian champions. She has been working so hard over the last few years, moving to France, then Finland, while pursuing this orienteering dream, and has amazing dedication and attitude. Bravo, Emily! There is more of that to come! 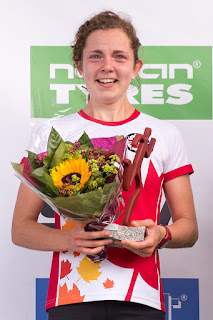 View of the Norwegian town of Halden from Frederiksten, a fortress that we found along the way to one of our trainings at Iddefjordfalle. We're so close to Norway that the southern Norwegian terrain is very relevant. 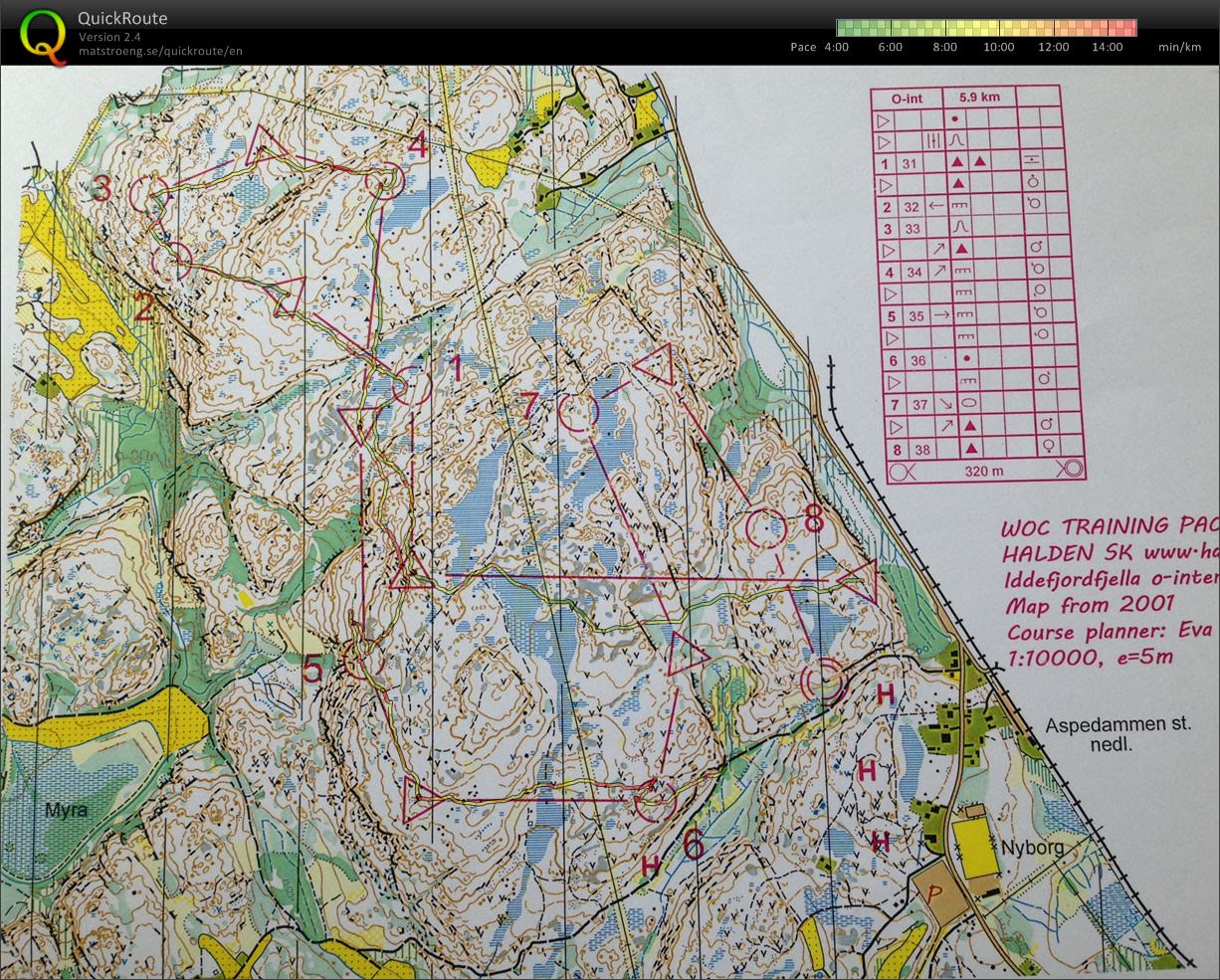 Click for full-sized map - orienteering intervals at Iddefjordfalle, trying to become one with the blueberries. 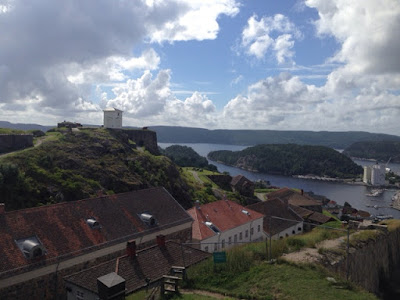 View from the top of Frederiksten


And now it is finally the morning of the Long Distance! My plan is again to focus on the navigation - Take the good micro-routes and choose the right macro-routes, dance across those open rocks and tumble across the cliffs like I have wings on my Inov-8s. Today, there is nothing I would rather be doing, and no place I'd rather be doing it! No matter how I finish in the results, I want to finish knowing that I ran a good race, proud of my effort and my navigation. 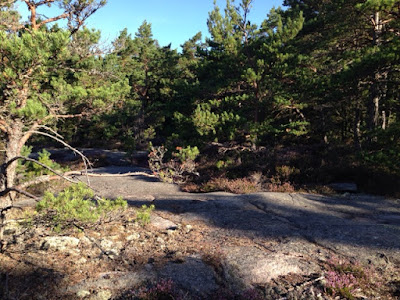 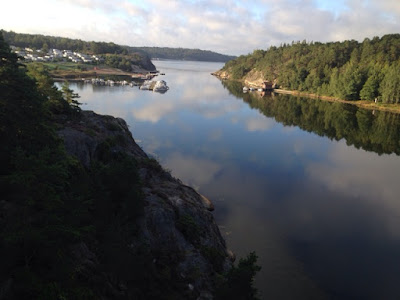 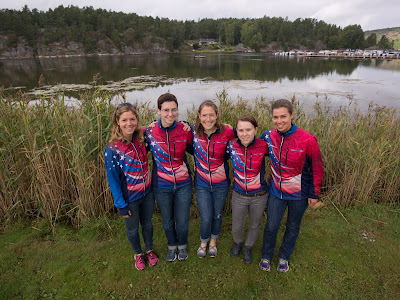 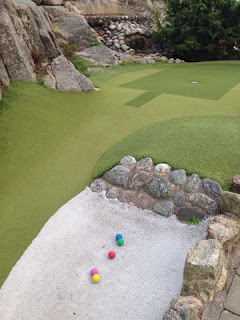 Team USA played minigolf (pirate-themed minigolf), and there were a lot of instances like this. I think we'd better stick to orienteering.