The last official race of the season was the Eastern Highschool Champs, up in Rumford ME. CSU sent pretty much every kid to this race on the Massachusetts team, and I was head coach, which meant I could make all the other coaches do the work while I ate brownies and watched the races. 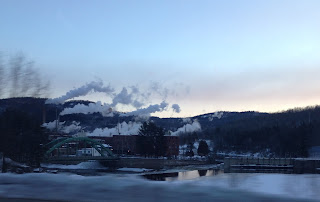 Race venue was Black Mountain of Maine, in Rumford. I love this race course, it's hard but fair, with some good climbing and lots of skiing, not just a highway. I don't love the smell of the town of Rumford, but that paper mill employs a lot of people, so can't complain too much. Usually the wind is blowing the right way to take the smell away from the ski area. 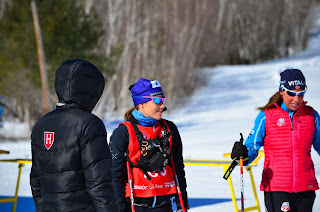 Love how many women we have on our coaching staff. I think we may even outnumber the men on this team, not a normal thing in the ski coaching world. Brian Burt photo. 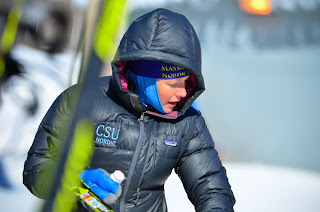 Caught in the act of actually doing some work. Brian Burt photo.

First race of the weekend was Friday's 5k skate. Turns out the Massachusetts boys all brought their A-games this year, and absolutely carried the team. The CSU boys were a large part of that, led by senior Oliver in 5th, then James in 6th, Ayden in 16th (huge race for him!), Jackson in 18th, and Jacob in 21st. That was just the first page! Laura led the girls in 6th, with Shea 11th, Madeline 13th, Amelia 21st and Rebecca 25th. Super strong showing for first-page results, though unfortunately Mass also had a reasonable showing on the last-page results, too, for the girls.

Saturday morning started with a mass start classic race. Hardwax in March! It's always great when EHS isn't a total klister-fest. We had more great results from my CSU kids, and mass starts are so exciting to watch. Laura moved up into 4th, skiing the whole race with the lead pack, followed by Shea in 9th, Madeline 15th, Rebecca 16th, and Amelia 26th. The boys absolutely sent it again, led by James in 2nd, Jacob in 6th, Oliver 18th, Henry 22nd, Jackson 24th, and Linden 27th. 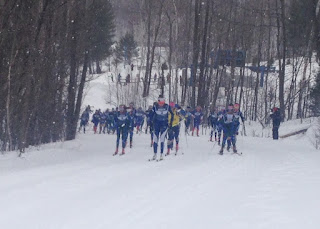 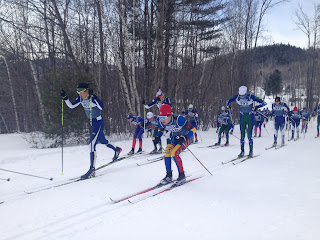 
Saturday afternoon was the sprints, wave starts with one skier from each state in each wave. That's a super fun format for spectating, again, and I really enjoyed watching the races. Mass had a great day in the sprints, and we ended up 2nd among all the teams after the three individual races. On the boys' side, CSU put 10 in the top 33! That's pretty good for a single club that trains on a golf course in eastern MA. Huge results Alex, Kevin, Dwight, Connor, and Thor, stepping way up.

The final race of the weekend is the mixed-gender/mixed-technique relay. This is my favorite race of the weekend, because the kids tend to absolutely send it. Nothing makes you work hard like doing it for a teammate! We had a couple really good relay teams, and it was a super exciting race to watch. We took the silver medal, which was the first year in the last eight or something that we haven't won the relay, but that was a tall order this year with Ben Ogden on the VT team. He put something like a 40-second gap on the field, which is almost impossible to make up. But in making that move, it strung out the pack, and Jacob was able to hang on for a little while, buying some time for the rest of his team.

Our second relay also had a great ski, with some really gutsy moves along the way. They ended up in 7th, and our third relay was 11th, just 0.1 seconds out of 10th. NH ended up beating us on the day, but not by enough to move ahead, so Mass held on to the silver medal position! I'm super proud of this team and my CSU kids, the guts and determination and attitudes they brought made a huge difference in both the results and the professionalism on the team. 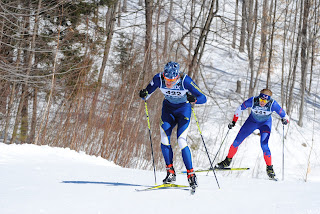 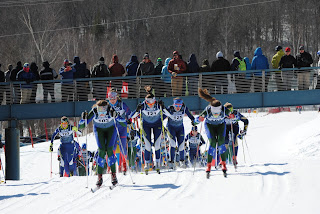 Start of the relay, Laura and Kate in good position

My kids skied great. This senior class was the one who had been on the fateful bus trip from Fort Kent four years ago, and it was great fun to have them close out their Highschool careers at this event. I was super psyched to see the great attitudes everyone brought. Lots of positive energy, fast skiing, and some heavy snotcicles. 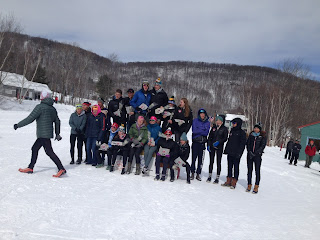 
Thanks to all my coaches who did the actual work! Hilary Greene, Robert Bradlee, Maddy Wendt, peter Rayton, Frank Feist, Gunther Kern, Dorothee Kern, Susannah Wheelwright, Hiram Greene, Graham Taylor. And a huge thanks to NENSA, Amber Dodge Freeman, and Chisholm Ski Club for hosting this great event!
Posted by Alex at 10:28 AM