I hadn't been planning to head back to Craftsbury for the Supertour Finals. But, Ed had been in Vermont for a month, with no plans of coming home, timing various races, so that was my only chance to see him. And, it turns out, watching your heroes race in person is pretty cool. All the USST members were there, including Kikkan and Jessie from the gold medal relay team. I definitely cried when I watched that Olympic race, because it was just so cool to see Kikkan do it. She's been driving this sport for the last decade and a half, inspiring women and girls around her, leading by example, and building up a team around her worthy of Olympic medals. What a way to wrap up your career. 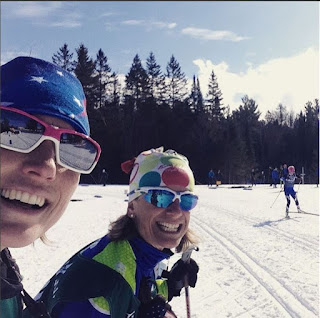 Kathy and I with a strong fangirl game, getting a selfie in front of Kikkan Randall finishing her race

Anyway, I got to see them race. They're so stupid fast. I got to cheer for graduated CSU juniors, who were also going stupid fast. The weather was awesome, and to top it off, there were citizens races after the Supertour races, so I got to race too!

Saturday was the 25k Spring Fling, twice around the flattest loop they could put together. The weather forecast ended up being totally wrong, calling for much more wintry conditions than what we found, but Rob and I did our usual ski coach thing of testing rills and topcoats and skis, and we ended up on some ripping boards. Unfortunately, our one junior in the race never gave us his skis, so didn't have the same experience.

The race was a self-seeded mass start, and with over 200 racers, this meant chaos. It then had ~2km of flat to downhill terrain, so the chaos wasn't going to end for a while. Luckily I made it through the start unscathed, and in a reasonable position, a little ways back from Rob and Bob and ahead of any women. Gotta look out for ponytails and round butts in a mixed gender mass start. There were quite a few BKL skiers mixed in, doing the one-lapper, and they were kind of hard to ski with, sprinting ahead and then coasting. I guess you don't learn about pacing until you're older.

My skis were great, so I spent a lot of time hanging out in a tuck. We finally started climbing up Sam's run, and I was with some masters that I knew, happy to not go any faster. A few minutes into that, a large group of college-ish-aged boys came through, clearly having gotten stuck in the start and not having the skis I did. One guy from my group upped the pace to go with them, but the rest were content to keep to our plodding ascent. We finally hit the crest, and I enjoyed the ride back down, gapping my group. Wheee! I could see Bob and Rob as we climbed back up to the Center, but I knew they were doing one lap, so didn't burn any matches to close the gap.

The second lap was much more lonely, since a bunch of folks had pulled off after one lap. I was skiing with Steve M for the beginning, leading on the flats and he'd lead on the uphills, and still the three other guys I'd been with on the last lap. They started ducking and weaving as it warmed up and got sunny, trying to stay on the shady snow, which was a lot faster. Sometimes I followed them, and sometimes I just took the short line, because my skis weren't that dramatically slower in the sun.

It spread out a little on the climb up Sam's, with the Craftsbury guy pulling ahead a little, and Steve discovering that his skis were dogs in the sun and dropping off the back. We started to see the back of my junior who hadn't waxed his skis, struggling in the slush and the sun. By the top, we'd made contact, and could see one other skier way ahead of us. Nice to have another rabbit.

Coming back up Ruthie's, I got sick of the ducking and weaving, and took the lead. The pace had also started to feel a little stale. Let's kick this up a notch! I was feeling good, and could tell from the various breathing noises behind me that some of the guys were having to push a little. It wasn't a break, but that wasn't what I was going for, I just wanted to ski my pace for a bit instead of following someone else's lead. They came around on the final climb past the cabins, where we finally made contact with our rabbit, Ethan T, also suffering on slow skis. Up the finally little climb and into the finish I guess I didn't push as hard as I maybe could have; I had no skin in the game against those masters, and they were all gunning for each other. It was a good fun race, though, and my longest all season, so it was nice to feel strong at the end. 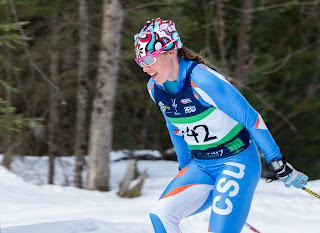 You guys, skiing is just so much fun!!!

Sunday was relay day. First we watched the Supertour teams throwing down, which was a really cool experience. Then it was time for the NENSA Club Championship relay. I was on a CSU team of Tom Smith, Amie Smith, and Rob Bradlee. That would be team Fluorinated Bacon to you. Amie supplied us with bacon socks, and we were ready to roll. 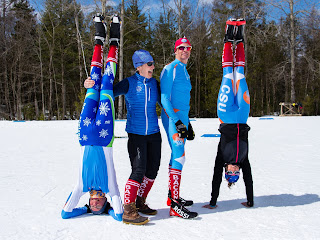 Rob went first (classic) then Amie (classic), then Tom (skate), then me (skate). Rob had a solid first leg, but Amie struggled a bit with the kick, and dropped some time. Tom had a good leg, reeling in quite a few teams, and tagged off to me maybe a few minutes behind the next mixed 200+ team, and even with the Mansfield Ice Agers, another mixed 200+ team.

My skis were rockets again, and I shot down Murphy's field barely holding the corners. Whooooooowee! Passed three teams by the end of Murphy's field that I hadn't even known I was behind. Then on the rolling stuff out past Duck Pond, I discovered that actually I was pretty tired. Rick, from Mansfield, caught back up, and I hopped in behind, even though that took some effort. Down the little hill in the field, I made sure to take the lead to give myself space, and that was the last I saw of Rick.

I started to push pretty hard up Eleanor's, knowing he was right behind me, and passed two BKL teams. Some people were cheering at six corners, which was helpful, and I got two more teams doing that little loop, but looking at results it appears those were both third-leg skiers. Back onto race course fare after that, over the B climb and into the final bit on Lemon's haunt, not too many people around to chase down.

I ended up with one of the fastest last-leg times, which was sweet, and held off Rick by putting 30 seconds into him, which was also sweet. We're listed as fourth 200+ team, but I think there's an error because the team in third is the SLU coach and three of his athletes, no way they're old enough. So a podium finish for team Fluorinated Bacon! Super fun. 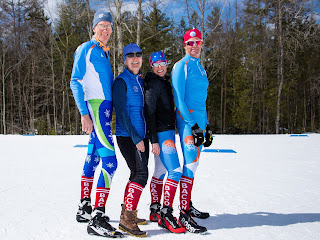 I'm super glad that I went up to race this weekend. It was a really fun way to wrap up the season, and now I'm ready for a little down time (though I won't say no if a ski trip pops up in my future). 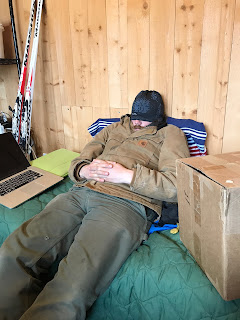 Ed catching some zzz's during the jury meeting... turns out he doesn't like early mornings. Who knew? But he and John crushed the timing game again, quietly making everything work and run smoothly. Fantastic.