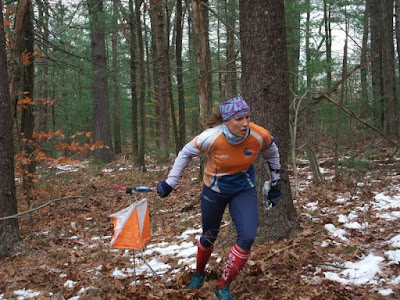 This year's Blue Hills Traverse went to new parts of the Blue Hills, starting on Ponkapoag and transitioning to BH West. It was a nice course, with legit features (though 17 was annoying), friendly running with not too much green or pointy stuff or steep hills.

My plan for the race was to start reasonably fast, cruising on some of my marathon fitness when on trails and roads. I knew I hadn't been in the woods much, but was hoping the residual strength would carry me through, as long as I didn't do anything too stupid. That was all going swimming well for the first five minutes, and I was near some faster guys and feeling relatively comfortable. Five minutes isn't very long. Leaving #1, I was still debating a left/right route choice as I cruised down the hill, tripped over something crossing the trail, and rolled my ankle pretty bad. Youch. Had to stand there for a while, trying not to say bad words, to let the pain fade and determine if I could run. Eventually I decided I may as well start walking down the trail, and soon I could run again, if gingerly. The rest of the race, off-trail and and wobbly rocks were bad news. 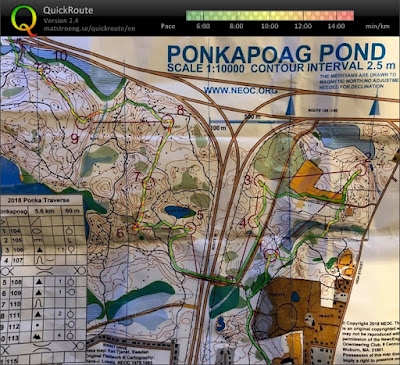 By #2, I'd caught to the tail end of a group containing Aaron, Bo, Neil, and importantly, Rachel. I don't care about the boys, but I really want to beat any women, and Rachel has some serious orienteering chops. She also has two young children, which can put a dent in your training volume and quality, so I thought that given the mass start nature of the course, I could probably out-kick her. But you never know, and now that my ankle was iffy, my confidence was shaken.

We were basically together the rest of that side of I-93, with occasional placement changes as we all took different micro-routes. I had fallen a bit off the end as we emerged from the woods and onto the overpass to cross the highway, and used the stretch of pavement to catch back up and move to the front of the group. Gotta play to your strengths, so I also used that time to scout some other paved or trail running routes for later in the course. 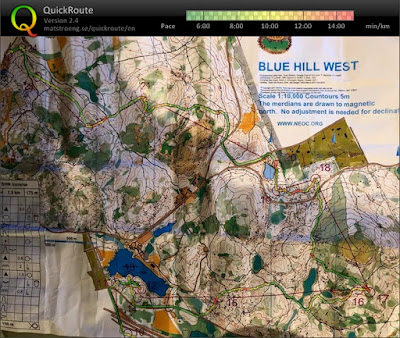 After the butterfly loop, I chose the right-hand road route to 15, dropping Rachel, and was behind Jimmy and Ernst climbing the hill toward the trail to 16, where they solidly dropped me, despite lots of huffing and puffing on my part. I wasn't alone for long, as Aaron caught up around there, and helped me blow less time on 17 than I would have done alone, wandering on the hillside trying to find a little boulder.

We went left to 18, but the trail was rocky, and my ankle was bad, and then I got confused by the cliffs in the circle, going to the unmapped one first. D'oh. From there, Aaron went up to the road, and I went straight, and stopped early, not quite making sense of things. By the time I actually got to 19 I could see Rachel approaching. Dang! She caught me at 20, and we ran together for a bit before hitting a road, where I knew I had one more shot. I was clearly faster on roads, so I just had to make the break stick this time. Took trails up toward 21, and I was thinking about running fast, more than my navigation, which is never a good plan. My brain, deprived of both oxygen and common sense, thought I was on a different trail than I was, and I ended up running all the way to the junction south of the control before realizing it, and had to hook way back to get the control. Luckily didn't waste time on it once I realized my mistake, but I knew Rachel wouldn't be far behind.

I had to be cautious running through the woods toward 22, and as I crossed the trail and started climbing, I saw Rachel pop out of the woods just south of me. I had maybe a 10-second lead, and I wanted to push that to 20-30 seconds so that I was out of sight. Ok, this really is your last shot now. I pushed HARD up the climb to 22, catching and dropping Aaron and Jimmy, then blasted away before anyone could latch on, following the index contour (it's the big obvious one on the ground) toward 23, gasping and stumbling and yelping the whole way. Basically running scared. I chanced a glance behind me at 23, didn't see Rachel, but didn't let up down the hill. The effort paid off, and I ended up with a nice 1.5min lead, and the winner's gingerbread man! To be fair, I don't think Rachel was going quite as all-out as I was, but a win is a win, and it was a lot of fun to have to fight so hard to defend my title at this race. 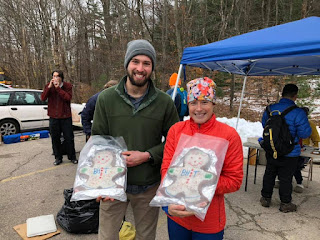 
Thanksgiving Camp
After a nice Thanksgiving celebration at Ed's aunt and uncle's place (only 27 folks at dinner, a small gathering this year for them), I left Ed at home and headed up to Craftsbury for our three-day mini camp with the juniors. Craftsbury had gotten a couple sweet dumps of snow over the last week, so we had some really excellent early-season conditions. Race skis all weekend! We got in some excellent distance skiing, and then topped it off with either a time trial or some hard uphill skate intervals on the new 5k south course. Good times. 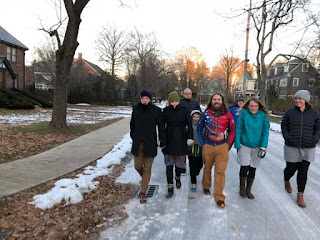 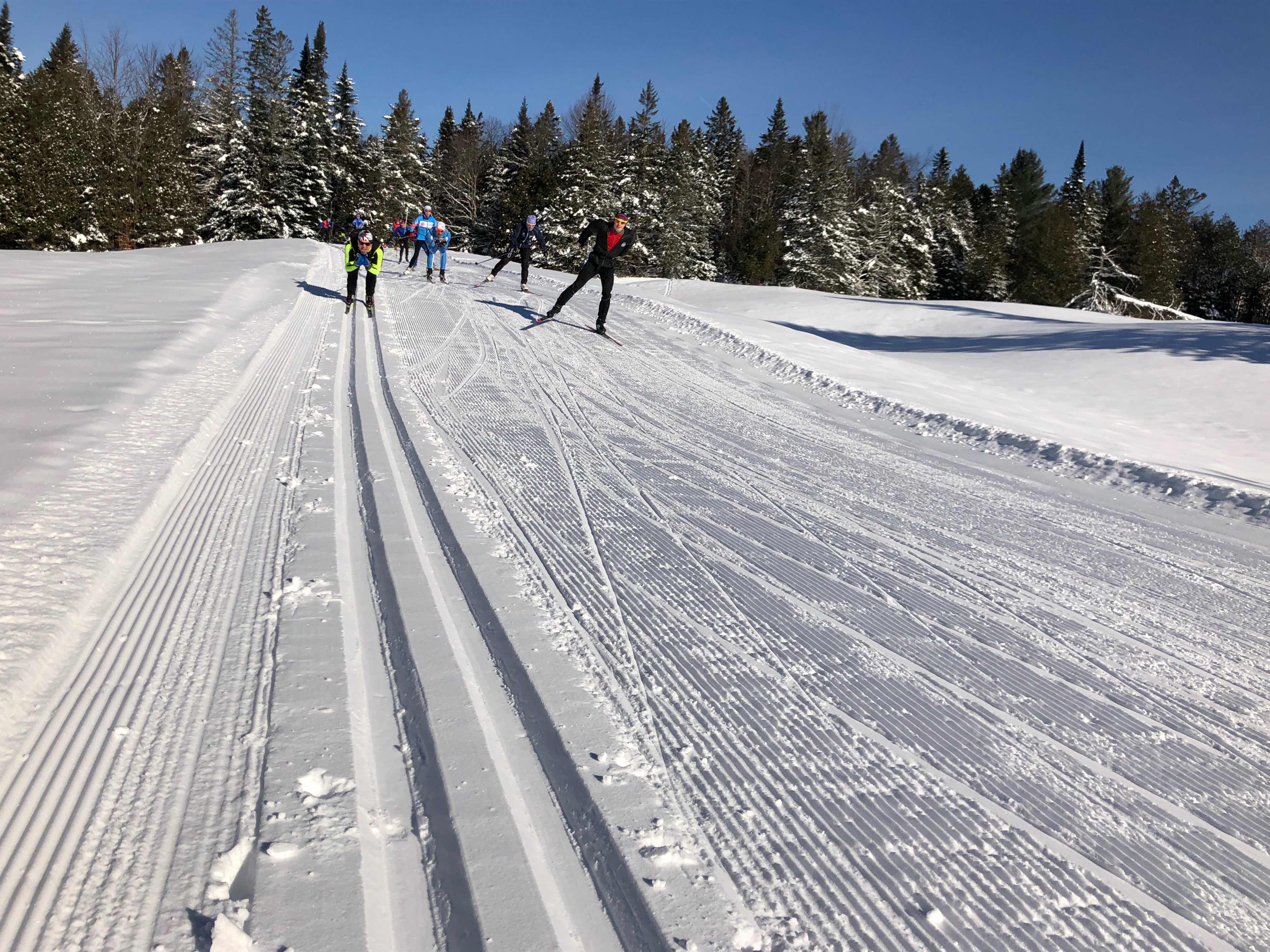 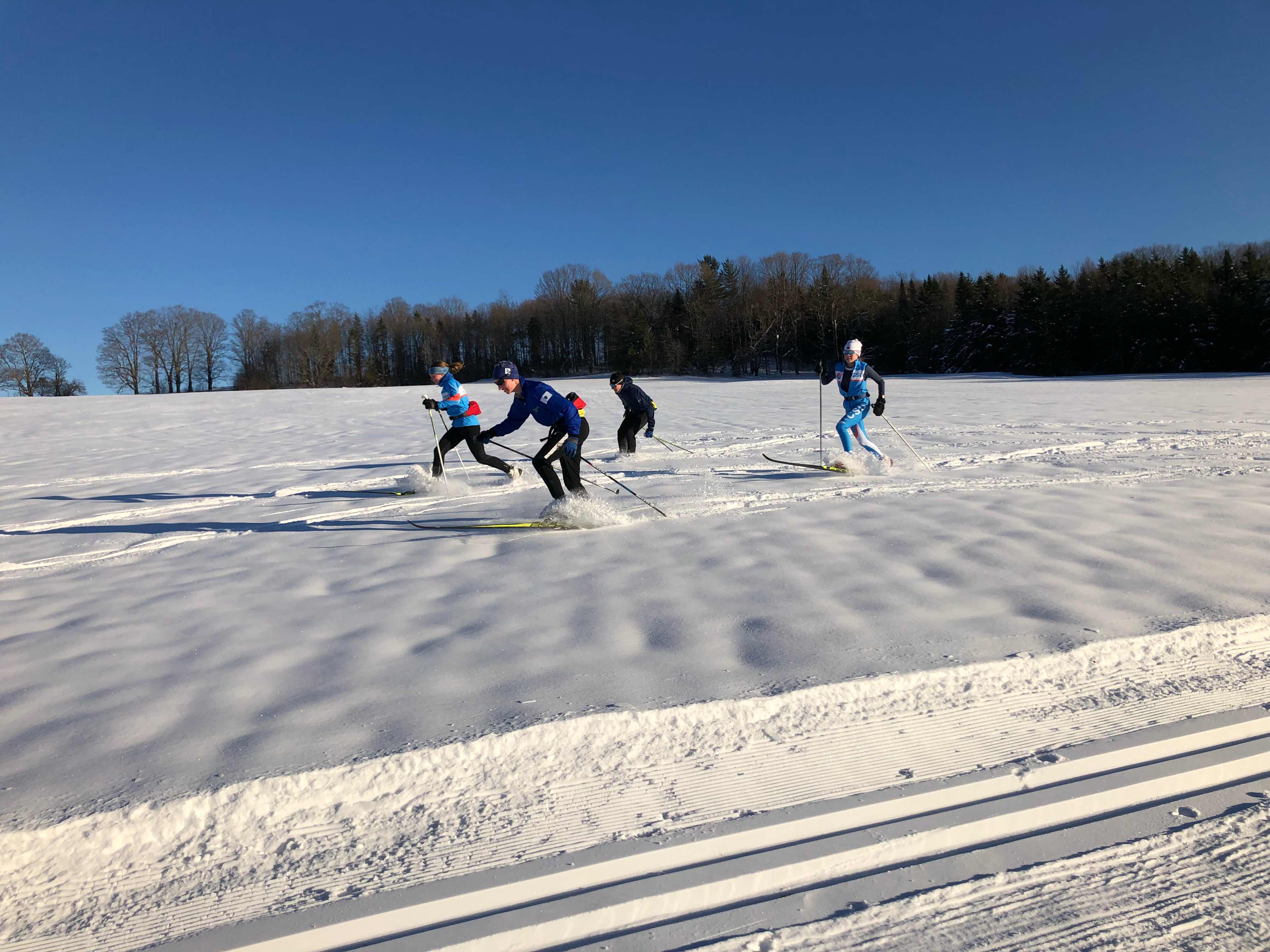 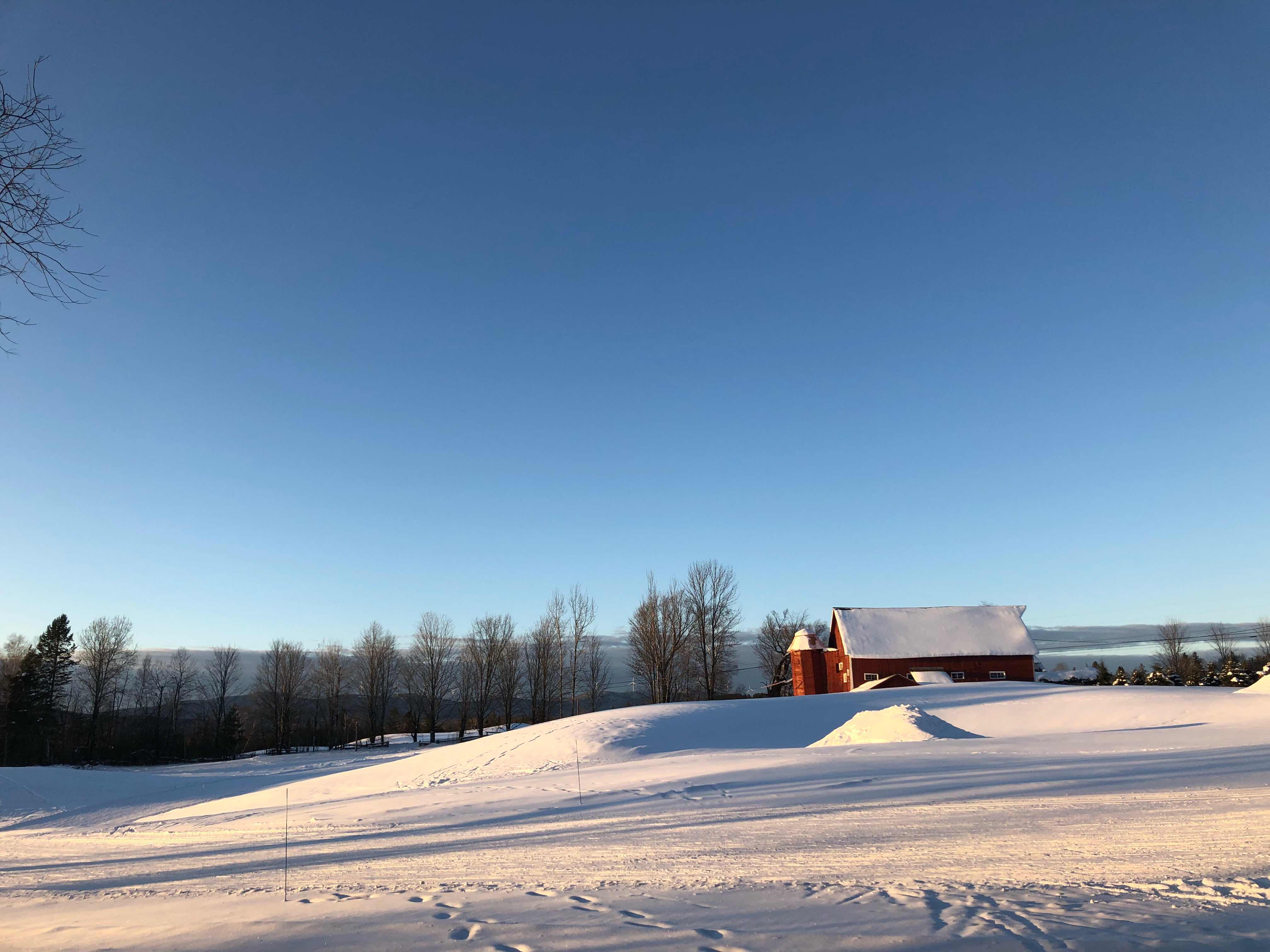 It wasn't all just blissful skiing, though. One afternoon, we had nearly the entire group together, doing a speed workout as we made our way around the 5k course. This is a thing we do all the time, all teams do it, it's great practice to race down the hills with your buddies and learn how to ski aggressively.

I don't think anyone was doing anything wrong; the boys were sort of jostling coming down a hill,  and probably somebody miscalculated or misjudged or misstepped or something, but really I think it was just bad luck. One of my boys hit a tree at full speed, and things got real pretty quick. He was out cold, and it really freaked out all of his teammates. Luckily, CSU has a lot of doctors, level-headed kids, and wilderness response experience, and we were all there. So, Maile took most of the kids off on a race to get the medics on site, the doctors stabilized him, checking vitals and clearing the scene, someone else blocked the trail with some skis, and we got some jackets on him. Within about 20min the snowmobiles had arrived and gotten him to an ambulance, with at least one CSU doctor in tow.

While he's going to be fine, and is making a speedy comeback already, it was a really scary situation. Things could have been really different. The kids were understandably really freaked out, but I was really impressed with how well they acted in the moment. Thanks to the juniors reacting maturely, having half our coaching staff be medical professionals, and having the accident at one of the most on-top-of-it ski areas meant that this sort of situation couldn't have gone better. But I hope it never happens again on my watch.

Now we're solidly into the shoulder season, hunting for snow and stoically weathering the cold rain. T-12 days to the first race! 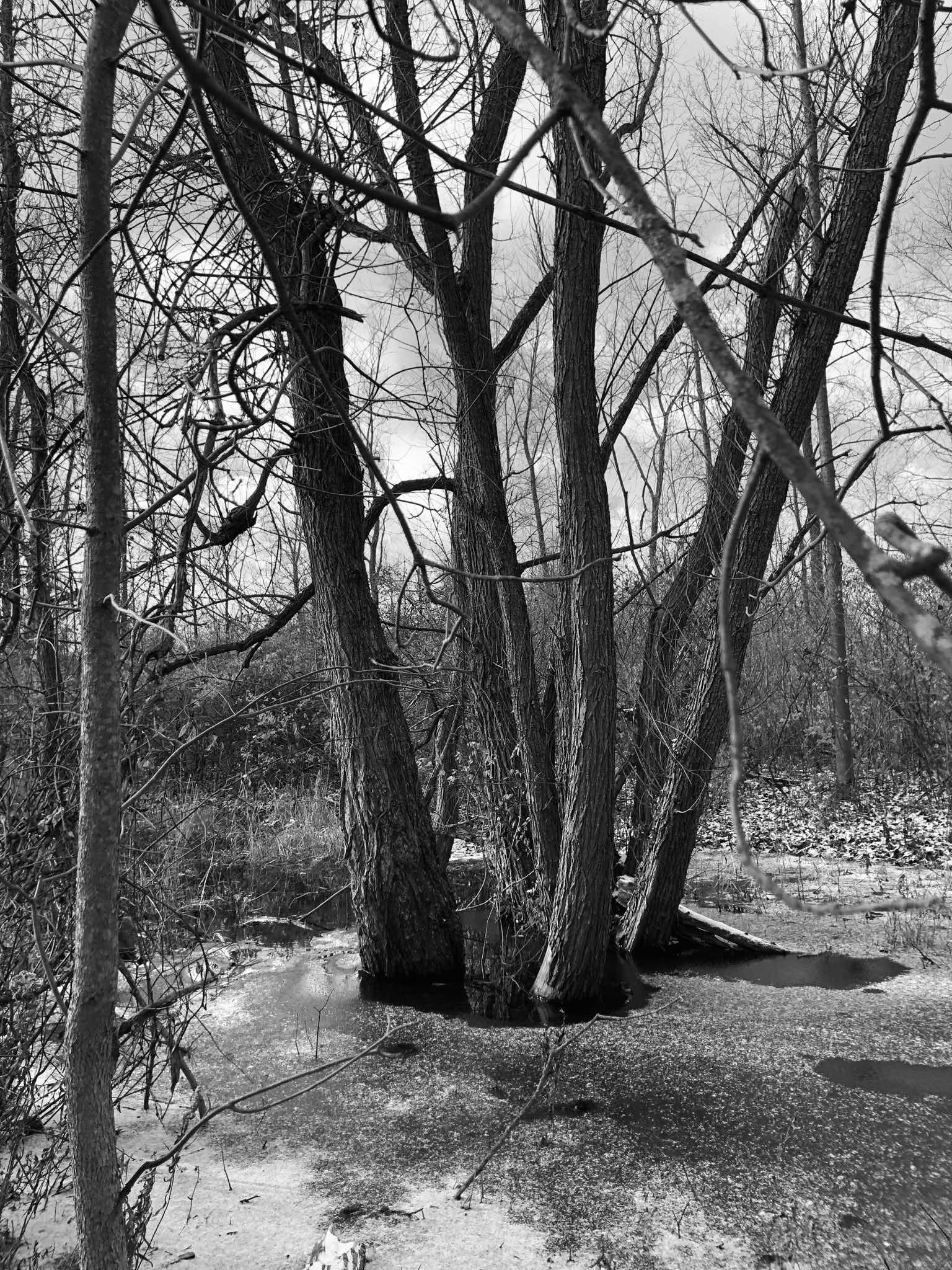