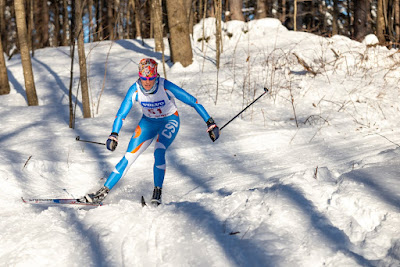 Version 1:
The indoor track workout got moved to Friday night, and I can't miss those because I paid perfectly good money to go run in teeny tiny circles. After the workout, I bribed Ed to pick me up by going out to dinner at one of our favorite brew pubs, and had too much beer and not enough water. We got home super late, so I put off all my ski prep until the next morning, when I groggily rolled out of bed and got to work on that, questioning whether this ski race was even a good idea. Mystery time happened, and somehow I had to leave before even making coffee and definitely before breakfast.

Picked up Ari, and we zoomed up north, where it was very pretty after the last snowstorm. Lots of people at the race, and we had to park way down the road. Conditions were soft and tricky, and on one corner the course was basically down to dirt. I didn't even use the test skis I'd set up, because Rob was already testing wax on the "chick sticks" which are flexed for me and Kathy, so I got sort of grumpy about having done extra work this morning. Skied a lap with Kathy and spent the whole time complaining about how terrible my life was, and how my problems are so much harder than everyone else's problems. Got back to the start area, and realized that I didn't have time to run up to my car to grab a thinner pair of gloves and a thinner hat, so had to race in wet mittens and a fleecy hat. 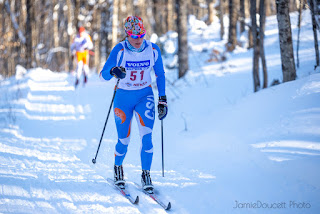 Figured I'd pop into race mode once I started going, but that never happened, and I sort of waddled around slowly instead of racing, feeling really stiff and sore after the track workout. I couldn't catch up to my 15-second girl, Jess M, and I knew I was faster than her, so why wasn't I catching her? God if you weren't such a fat slug you'd be skiing better. Fell on my ass on the corner with the dirt trying to avoid the rocks, now you'll never catch Jess. Look out for that gal who started behind you, she'll be tracking you any second. Slogged around the rest of the course and Jamie was taking photos on the longest hill, ugh, why am I so slow? Walked up one of the herringbone hills, and then on the second lap started passing some slower skiers, and that's the only reason I caught up to Jess, because she wasn't as good at passing. Thought I was doing awesome to hold her off, but turns out she fell in a river. Go figure, the only way to beat my competition is if they fall into a river. Finally trudged across the finish line, nearly six minutes slower than Kathy's time. Thank god that's over. 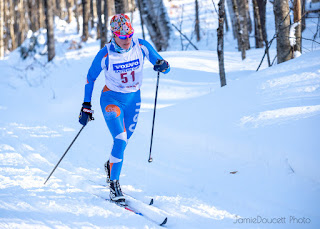 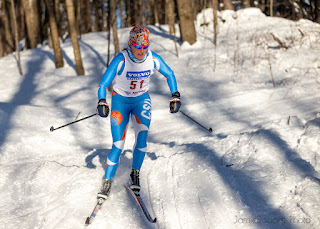 Version 2:
Rather than cancel the indoor track workout when our usual Thursday became unavailable, the powers that be managed to get us access to the track on Friday night. I love indoor track, I love the group I run with, this is well worth the money I paid to be a part of it. This would serve nicely as some opener intervals for the race tomorrow! Ed kindly picked me up, and we got to have a really nice dinner out together at one of our favorite brew pubs, where I enjoyed myself, though I should have had more water. Luckily, the race on Saturday had a late start time, so I knew I'd have time to re-hydrate in the morning. Thanks to the late start time, I could put off my ski prep until the morning, and even though it took me longer than I expected, I made some really good skis. I didn't have time to make breakfast at home, but Ari, my traveling companion, didn't mind stopping in Lebanon for me to pick up breakfast and a coffee.

The course was absolutely beautiful, fresh snow coating everything and making the whole world a winter wonderland. This also meant that the course was soft, but I'd rather have fresh snow and a soft course than ice and rocks! Rob was testing skis when I arrived, which was great, because it simplified my pre-race prep, and allowed me to go for a nice pre-race tour of the course with Kathy, where she was a great sounding board for my troubles and made me feel a lot better about life. I was probably still thinking about our conversation when we started, because I didn't feel very race-ready, but I was happy to be out there giving it a hard effort.

Jamie was taking photos, and it was so great to see him out there again, after a medically-induced hiatus from ski racing. It took me a whole lap to catch up to Jess, who had started 15s ahead of me, but I was able to put some of the lapped skiers we'd just passed between us, and then I was on my own for the rest of the race. I may not have had the tiger's eye, but I really enjoy that course, and all the BKL kids were out cheering, and in the end, I won my age category, and a sweet buff. What a way to spend a day! I'm so thankful that Bob continues to host this race, it's really special. 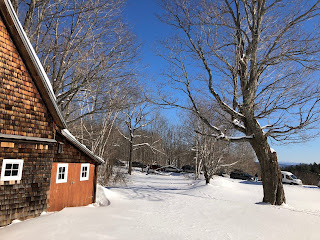 Vermont post-snowstorm is the most beautiful time to be in Vermont.


The story
I recently read this article by Sabrina Little. It's worth the read. In the article, she talks about how changing the message of your story can affect your life, and while it's the same story, you have the power to change the message. This same story, the tale of my experience at the Bogburn, reads very differently from version 1 to version 2. I still want and need to acknowledge the things that don't go according to plan, but I have my friends around to help me overcome the challenges. Even if I don't reach my goal, I had a good day.

The hard part, sometimes, is how to change your story while you're living it. 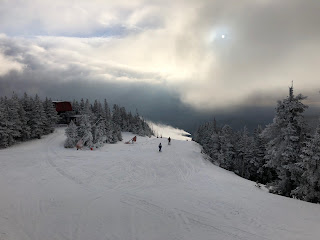 Great two days of gravity skiing with the folks. Gorgeous views, if cold and icy conditions at Stowe.

The part of the story I suppose I left out, is that it's been a great winter so far. I raced in the Craftsbury sprint weekend in early December, placing 9th in the qualifier and advancing through to the semi-finals, where I was faced with the hard truth that I was NOT ski fit enough to handle that many races in one day. But I knew the fitness was coming, and that doing a strength workout the day before the race, while not great race prep, was going to serve me well down the road. It did - I raced again the following weekend at the Craftsbury Eastern Cup, qualifying in 34th in the sprint (just missing the open rounds), but that put me into the masters' heat, in which I was the only master who deigned to show up. That was disappointing and a little embarrassing (not to mention, we could have saved prepping my skis a second time!), but it did mean I won the race. The 5k skate race the next day went really well - I was classified in the masters wave again, but my time would have put me around 39th in the open race, ahead of all my CSUers. They should go faster. It's nice to have good races, where you feel fit and rested and you're riding a really fast pair of skis.

From the Eastern Cup, I put in a great two week block of training, at Mont Sainte Anne and then back at Craftsbury coaching for Senior Nationals. That was a great week, not without its up and downs, but the ups were real high points. We had a big crew racing, and I thought they all comported themselves very professionally, and skied very well against the deepest field in the country. It was such a luxury to be waxing in a trailer - I'm not sure I'm up to waxing outside again, like we will for the rest of the season.

Now that we've had a couple weeks of good training under our drink belts, the race season is kicking off in earnest. Exciting stuff! 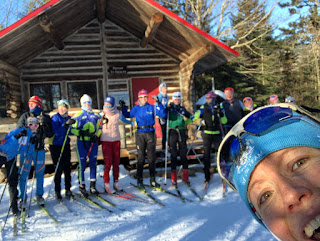 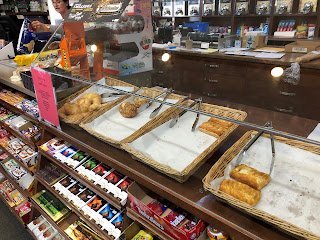 The appropriate way to do MSA is to stop by the Boulangerie on your way home from skiing, before lunch. Those croissants are to die for. 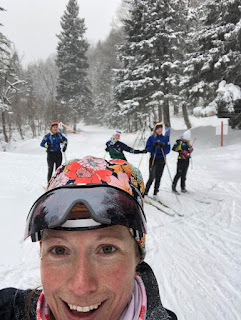 I like taking selfies with my team in the background 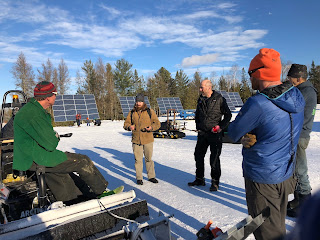 Ed and John, discussing where to put the big green bus for the announcers. Or something like that. 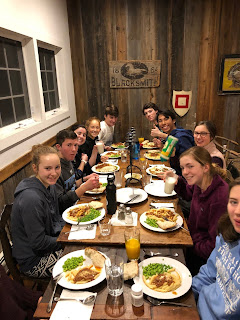 The Nationals crew, enjoying one of Christina's delicious dinners. So nice to have a big house and somebody cooking for us. I got home and had forgotten how to take care of myself. 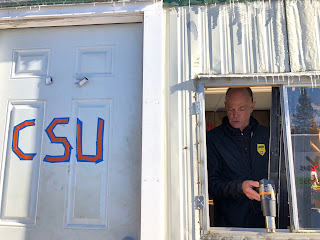 CSU wax trailer, where you use a heat gun to get the windows open 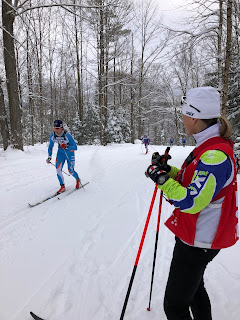 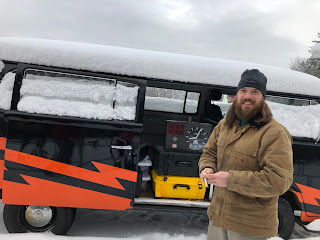 Bullitt Timing's slogan: We bring buses full of cables, and zip tie them to everything. 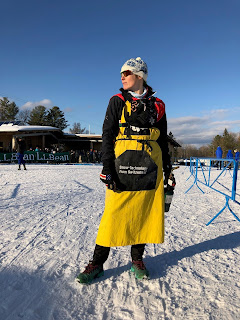 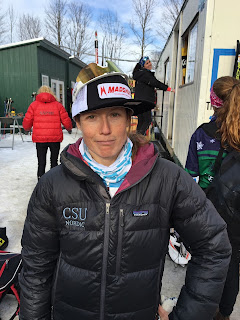 Todd Eastman gave me a hat. I'd say it's a good fit! 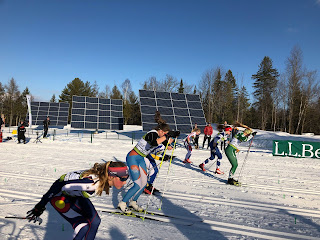 Laura in the Nationals heats