Reasons to not fly Northwest Airlines, and a fun family gathering

1. They make you sign your life away to travel with bikes or skis, and then charge you $80 anyway (not that I was flying with a bike this weekend).
2. They make you pay for your own peanuts. WTF??? ALMOST got to go bike racing this weekend. ALMOST.
It was the 85th anniversary of the Brookside school, which is the school where my grandfather was headmaster for 21 years and both my mom and her sisters went to school, and lived, so this was a big party weekend in Detroit. We had an awesome time, lots of laughing, eating, talking, walking, with Gramps being the center of most of the attention, which was great since this was his day, really. It was also great because both me and my brother and my cousins Geoff and Kristen were there, which hasn't happened for god knows how many years.

I even got to see Callie for a bit, the temptress claiming she has a bike I could use in a race and then telling me just before I get on a plane that the bike actually just got rented... so much for that mtb race. Probably for the best though, because we were busy all day Sunday at this Brookside shindig, and it was great to see how cool this place really is. Plus, there was good pie. My favorite was the statue of Zeus (that we almost didn't find) where you stood on a certain flagstone and his eyes would shoot water out at the innocent bystander. hehehe! 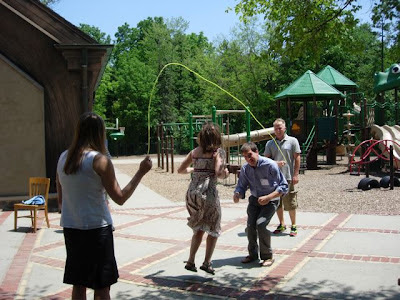 I guess it is possible to have fun on a weekend without doing any races or epic adventures. Who'd'a thunk it? If any of you family members are reading this, feel free to send me pictures and I'll put them up. Thanks for a fun weekend! But now its time to do something epic again.