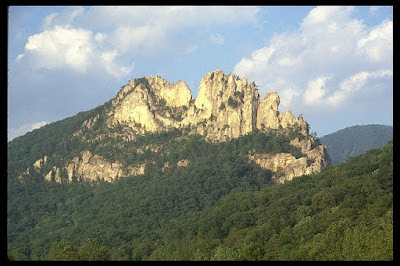 Who'd'a thunk it. I went on a company retreat. A little "forced fun". It was actually really fun, although we all had our doubts going in. The central appalachians are one of TNC's more important areas to try and preserve, and we have a bunch of matrix forest blocks (big blocks of unfragmented forests) in there. So, they thought that would be a good spot to go.

We thought it would be more like camping, based on the description, but we were staying in these super deluxe cabins. A/C and everything. There was a bit of mandatory team-building stuff, but mostly we were just playing around. We went on a couple hikes, some nature walks (come on, we're the NATURE CONSERVANCY), and a sweet canoe trip. If you ignored the bugs, the rednecks with shotguns, and the poultry processing plants with pipes pointing into the river, it was a pretty sweet area.

I should mention that chicken poop is a major problem down there. They're finding all these hermaphroditic bass, and they think thats related to the level of chicken poo. So, on our canoe trip, nobody really felt like swimming. This part of WV was also the site of a giant chicken waste spill a couple years ago, causing some massive fish kill further down the river. mmmmmm. But real pretty on top!

Here are some pictures I stole from the internets. The big rocky thing is seneca rocks, which was pretty cool because it was this big sandstone formation that had been sort of turned on its side, so the rocks were really skinny. Like, 2 feet across. You stood up there and almost felt scared of heights. We also got to check out Bear rocks, this place on top of a mountain with bare rocks, and some sweet wetland things. And then a canoe trip. Not bad for a company retreat! And now its the weekend again... I like this life :) 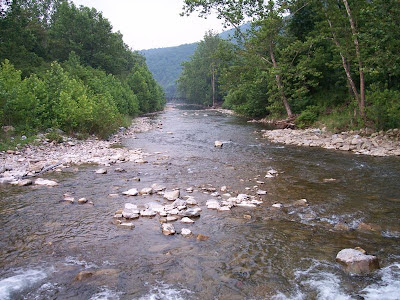