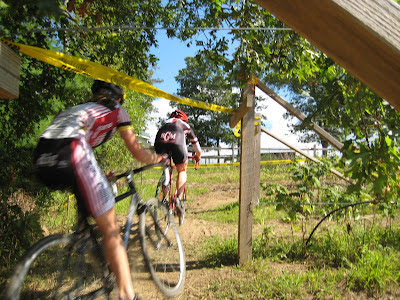 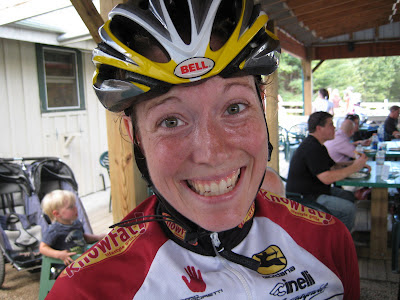 How many people can you pack on the fewest number of bikes in the most number of races? Well, we did it with just four people on two bikes in five races. One car. No roofrack. And lots of ice cream!!

Eco-cross has a beginners' race, so Ed decided he would give it a shot, since Colin was willing to lend his bike. Anna Mcloon wanted to try cross too (maybe with a little pushing from me), so I lent her my bike. So we were good with two bikes, and four people. Josh and Sarah, Colby folks, stayed at my house friday night, in our luxurious "guestroom". They got to fight over who got the couch... So, they drove down with us too, and then Josh won the beginners' race so stuck around to race again, since he seems to really like getting it handed to him by doing two races in one day.

We got there at 8:30 for a 10am race, and although parking was set up, registration was nowhere to be found. By 9:15 they got their act together, but it was pretty sloppy. Meanwhile, Josh had gone out to see the course, and he came back pretty soon saying he'd gotten lost. Lost? On a cross course? Me and Colin went out to walk the course as Anna and Ed warmed up on our bikes, and we realized that the course wasn't fully set up yet. We put some branches out to help define switchbacks, and basked in the glory that is a technical cross course.

Beginners' race goes off, first the men, then the women. Josh fought for a bit then ended up way out front, so we heckled a little bit. Ed had a really good race too, as far as he was racing, beating a bunch of people and generally looking like he was having a good time. For some reason, I cheered him on by telling him he looked like a lumberjack as he did the one-armed bike carry up a runup... don't know where that came from, but when you can make racers laugh you know you're doing a good job cheering. Sarah and Anna were doing well, too. Sarah was riding really solidly, and Anna ended up third in her first race, if a little shaky at times on the bike handling side of things. 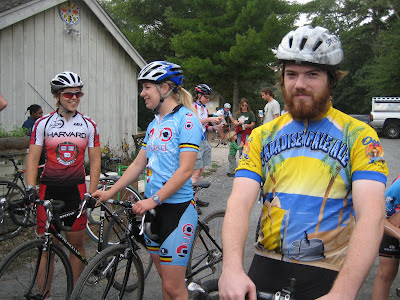 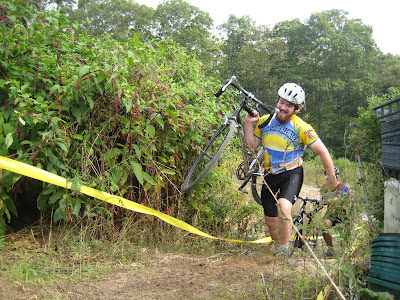 Once I got my bike back, I lowered the seat to my position, and went to tighten it up. *SNAP*! Oh shit what had I done??? Relatively minor, I just broke the bolt that clamps the seat post down, but that essentially made my bike unrideable unless I wanted the saddle all the way down. Luckily, Sarah lent me her bike. Then there was some fiasco with Colin's bike's wheels, because Anna was going to use that bike to race in the open race. She'd had so much fun she wanted to do it again, perfect! We start out with the juniors, and the pay included them, so essentially there are three spots gone already. Ah, well. Jess Ingram took out the start, and led until I couldn't see her anymore, so I figured she'd gone out too hard since she was ahead of Amy Wallace and Rebecca Wellons. But you never know. I decided to ride at my own pace, and not go too hard, since instead of legs I had jello-filled sacks of skin. I guess the stress of last week had caught up at last, and I could feel that I was just exhausted. I caught Allie Kenzer at some point, but she let me go by so I assumed something was wrong. For the rest of the race I was chasing an indefab girl, to no avail. I guess she's a mt biker too, because I wasn't putting any time on the technical sections, just the runups.

With three to go I had almost made contact with indefab. I figured I would get lapped by a Keough, so it was actually 2 to go. I had almost made contact going up the runup that it turns out is actually rideable, and then I dropped my chain and with typical race-hands I couldn't get it back on for a solid 10-15 seconds. Then she was gone, and I was chasing again. She held me off, but I was still pleased with my race, for what it was, because I rode it at a sustainable pace. I was maybe a little redlined at the crests of hills, but it wasn't the pure pain that cross can be--it was pacing! Crazy, I've never done this.

So, after Colin fixed his bike (apparently Ed broke his shoe and Anna broke the handlebar tape and the front brakes), he and Josh went off to race the open men, while the rest of us ate amazing food and heckled. Overall, a spectacular day, just in terms of the funness of the course (that is most definitely a word) and the good food and good friends. I love cross! And of course, the alpacas (is that what they were?). I think the ice cream there is possibly the best ice cream I've had in my whole life. I'll need to find some excuse to go back there.

Sunday I got up really early to drive down to CT for the US Orienteering Relay Championships. I got a ride with a fellow CSUer, and as I was lining up to start (I was first leg), Brendan suggested that I follow JJ Cote. Who happens to be on the national team. Yeah, sure. Going in to control 1 I was completely redlined, and as we headed to 2 I knew I had to race my own race. My legs wouldn't let me run up hills, it was more of a fast wheezing hike, and I wasn't running all that fast on the non-uphill parts of the course. Navigation was good overall, but that is probably because I ran so slowly. Probably had the slowest leg on my whole team, which is not a good thing, even though they're all pretty good. At least we were the B team, our A team took 2nd, which is pretty cool. But my legs were definitely feeling the effort from saturday, as well as exhaustion from the week before. Time to recover so I can race fast! 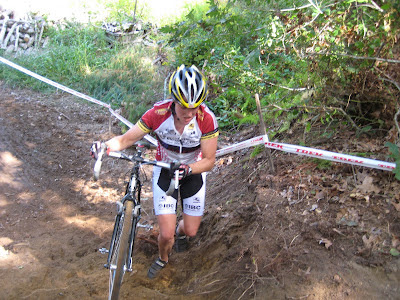 anyways, you rode an awesome race, it was a lot of fun cheering for ya.

hey man, not my fault that all y'alls wheels can't handle the power.

and the ed/lumberjack picture is awesome. i've never heard someone get so excited about bad cross technique as you did for that pic.