Hell starts with a P, and rhymes with "awtuckaway state park" 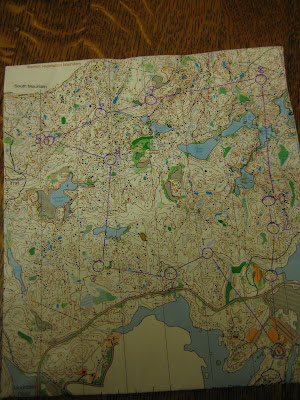 It wouldn't be orienteering if I didn't get lost getting to the meet. I claim that I get my navigational errors out of the way while driving, but usually I make just as many while running. Today was particularly bad, though.

Things started out alright. I was having trouble finding good attackpoints, but I was getting there none the less. Number 1 wasn't much of a problem, and number 2 wasn't so bad either. Then I made a sloppy move going to 3, and got a little turned around. Normally this isn't a problem, you lose maybe 15-30 seconds finding a different feature to attack from, and you get your control. For some reason, I couldn't find any features distinctive enough, and I spent a serious amount of time wandering around cursing the gods of orienteering. The problem with the Pawtuckaway map, is that it shows these big distinctive rocks on the map, but when you get out on the terrain, and there are so many big rocks that there aren't any distinctive rocks, and its basically your best guess as to which rock the map maker thought ought to be on the map. So, number 3 was bad. After that I got a little smarter, and chose attackpoints along the route, so that I at least got to the right area, which is something I should have done all along. Dummy.

Number 3 to 4 I navigated off the lakes, since they're big, and hard to miss, even if the water level is low. It was funny that even though it was raining, everything was super dry, so I ran through many marshes without realizing it. This got me in trouble a couple times. Number 4 was another one that I think I got lucky in finding, but I did find it. After that I got a lot more confident, an I hit numbers 5 through 8 without much of a problem. Number 8 to 9 was a long leg, and I thought I did pretty well getting close to the control, but thats where I made the fatal mistake. I found two little damp spots that I thought were the two lakes I was going to attack off of, and they were not those lakes. So I ended up running down the wrong swamp, and running around in that area for about 15-20 minutes before I finally hit a stone wall, and realized what I'd done. At this point my spirit was pretty well crushed, and I limped on back to the finish in a pretty black mood. Overall, a pretty sucky run, particularly because so little of it was running because I felt so unconfident in myself. I think I won, by default since all the other girls (the fast girls), ran down on the green course.

Relay champs are in a couple weeks, and they're putting me on a team... this is probably not a good move on the part of the CSU runners, but at least its not at Pawtuckaway. Time for more o-training...
Posted by Alex at 6:22 PM

are any guys good at orienteering? as a gender we tend to have bad sense of direction, a skill that seems requisite for orienteering. So do women dominate? Or are there some extra genetic freak men who are super athletes and have a trusty internal gps?

I'd say its split pretty evenly. The guys tend to win since they run faster. Since you can't ask for directions in an orienteering race, women don't get the advantage we normally get when traveling somewhere by car...

And its not as much about internal GPS as being able to pay really good attention to where you are and where you're going. And running really fast while you do that.

If orienteering didn't have the phrase "attackpoint" it would be roughly 5 times less cool.