This was a fun event. It was too bad it coincided with the Bowdoin Duathlon, because it was a pretty small turnout, but it was a nice, if windy, day, and I won some gels. It doesn't get much better than that.

I was pretty tired, so its a good thing that this is a rollerski race in eastern Massachusetts. Translation: flat. I had pretty much the slowest skis out there, but there was only one other girl racing the skate division and she was a Harvard skier, so I wasn't too worried. John Rich got away from me early (V2 aeros), and a Harvard guy (Chris Nabel I think) went after him (proskis), so I figured they were gone, but at the top of the hill my superior balance got the best of Chris and I caught back up. Another master on fast skis (ski skett sharks, which are essentially racing rollerskis) drafted me up to Chris, and I hauled them around until the first classic skiers caught up. I decided after the first lap that I had been going closer to 30k pace than 15k pace, so I picked it up and that really made me hurt. But I shook everyone off my tail except Chris, who I think was double poling behind me because he didn't quite have the balance to V2. 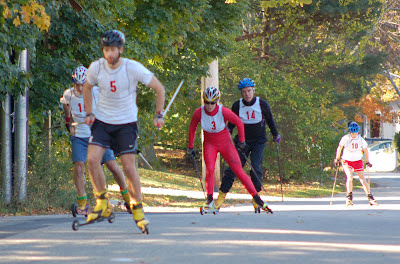 The start. Giant fields, as you can tell... but a fun race, none the less! 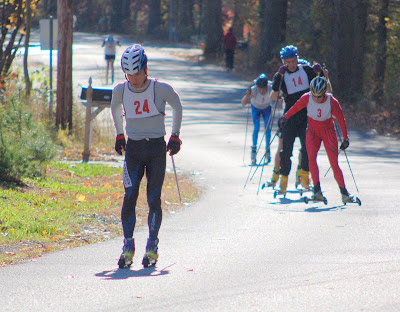 Its a windy day. You think to yourself, oh, there is the smallest person on the course! I'll draft her! Meanwhile, I try in vain to catch Frank Feist.
Posted by Alex at 9:49 PM