Breaking down a ski-o map 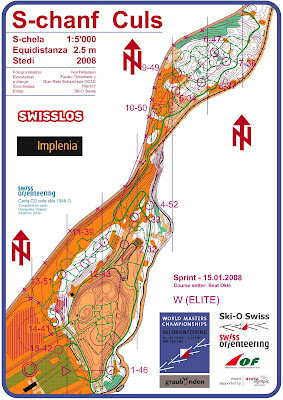 Another long post, sorry. What I'm going to do is talk through the route choices I took in the sprint map pictured above. If you click on the map, it should open to a slightly larger size. If I were savvy enough, I could draw my route on there, but that doesn't seem to be happening...

Starting at the start triangle, I took the wide trail out of the stadium and took my second right on the narrow trail. I then took my first left and cruised in to number 1. At that point, I had to decide whether I would ski through the control, so to speak, and come out to the main trail again that way, or turn around. It is usually better to ski through a control, since you don't lose any time from turning around. However, in this case I did not want to add any elevation gain on the narrow trails, since they are difficult to ski on. So, I turned around as I got to the control (since I had to hockey stop at the control anyway, that wasn't too difficult), and skied back out to the main trail, where I turned right.

To get to number 2, I knew that I had to get to the skating trail on the other side of that semi-open hill. I did not want to go over the hill, so the next-most logical thing to do was to take the trail that skirts the edge of it. Instead of counting trails, I used the edge of the hill as an attackpoint, and skied hard (maybe 20-30 seconds; it is not a long stretch of trail) until I saw the first trail heading west after the hill. From there I turned right on the skating trail when I got back up to it, and skied through number 2.

From there I took my second left to get to number 3, and skied through it to the T junction, where I went right, onto the skating trail, and then a quick left, back into the maze. The first right got me to number 4, but then I had to turn around, so it might have been faster to go farther on the skate trail and ski through the control. Then there was a relatively long leg to number 5, time for some serious skiing. I came out to the skating trail just below the first bend of the switchbacks, and followed that until the uphill cut-through, which I took, despite it being narrow. Then I followed the big trail up over the train tracks, and took the fourth left into the maze. I used the train tracks as an attackpoint--I skied really hard to there, and then slowed down a little in order to not make any mistakes.

Between 5 and 6 was my only mistake on this course--what I should have done, given my skiing competency vs. my navigation competency, was to go back out to the skate trail and count off the junctions until I got to the right one. Instead, I went through the maze, and made a couple blunders along the way. Heading away from five, I took the right hand junction at the first Y, and at the second Y, instead of going left like I should have, I went right, ending up at my number 8. I was able to match that control code with what I had on my map and relocate, and I then skied past number 7 to get to 6. Once I was there, I knew where 7 and 8 were, since I had just been there, so I retraced my steps. Not a huge mistake, but it would have been considerably faster to take the skate trail.

To 9, I went right left left, and slid down to the control. Having a control on a downhill is tricky, because it is difficult to stop exactly where you want when you're on a narrow trail. To 10 I continued down the hill, jogging right-left and over the little saddle before bearing right, to the trail junction. Then there was another long leg--I went down the hill on the big trail, and at the apex of the first switchback took that little trail, which made a Y, where I went left. I bore left at the next Y, then took the first right up the hill to the control. From there I turned around to get to 12, although I should have skied through it. I went right left left right, and skied through 12 to follow the outside of the maze to get to 13. Yellow denotes open fields, so I could see 13, and by following the outermost trail, I knew I would get there. Often in a race, it is faster to take the safe route (for me) than to take the more direct route.

I skied through 13, and took the outermost trail to get to 14, which involved a steep downhill plunge into a pit, marked as a contour line with a little brown dash in it. To 15 I decided to take te big trail over the steep little embankment, although it would have been more direct to take the little trail straight over the top. To take that big trail I skied through 14, then went left and came out on the road, where I turned right, and then right again on the skate trail over the hill. Then I finished.

I hope that helps to explain how one moves around on a map like that. The whole thing took me about 26 minutes, skiing not all that fast. The little maze parts take a lot of navigating, and it is often faster to slow down the skiing in order to navigate well.
Posted by Alex at 10:19 AM