The last day of racing was the relay. Since I was the only American woman there, I teamed up with a Russian and a Swiss girl for the relay, since the organizers were very interested in having full teams. The Russian girl must have been angry that they didn't put her on one of the two Russian national teams, because she won the first leg, tagging to Karmen (the Swiss girl) in the lead. Karmen dropped back quite a few places, but still finished within a few minutes of the Lithuanian team and the Czech Republic team, ahead of another mixed team. She tagged off to me, I got my map and started hammering... but I wasn't moving anywhere. Gee, racing four days out of five at altitude makes you tired? Says who?

Anyway, I decided to back off a notch of the flail factor and ski a clean race, and I ended up catching the Lithuanian team, putting five minutes on their third skier. I guess everyone else must have been tired too, because this was the race where I was closest to the leaders. Too bad it wasn't an individual race.

Overall, racing here was a great learning experience for me, and I've come away from it much more confident in my navigation on skis. I've also recognized places where I need work, and I'll be addressing these deficiencies before Japan, for sure. Next year, they will also be holding a "Ski-o Tour", similar to the Tour de Ski. This will be six races in eight days in three countries, starting in Austria, moving to Italy, and finishing in Switzerland. I hope to attend this event as well as the world championships, because six days of racing on true ski-o trails (as opposed to just skating trails like we have in the U.S.) should be really beneficial to me.

The rest of the maps (the pdfs are also linked in case they don't show up): 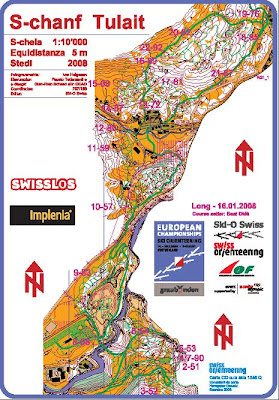 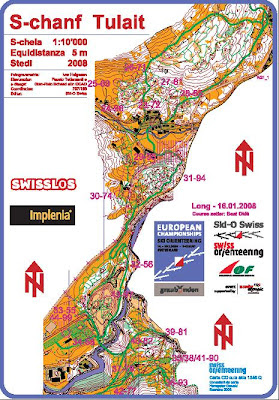 Long course map 2 (begins at control 22, which is represented as a start triangle on map 2). You can see how the straight line to number 23 goes right past 27--this is where I made the mistake, thinking that the line went to 27 and skipping number 23-24-25-26. oxygen deprivation is a bitch. 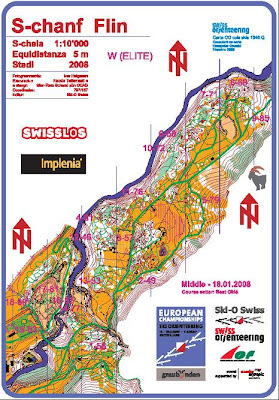 Middle Distance: my biggest mistake on this map was going down the hill into the stadium, thinking that number 15 was actually number 14, and having to turn around and climb back up that hill to number 14. Dummy. 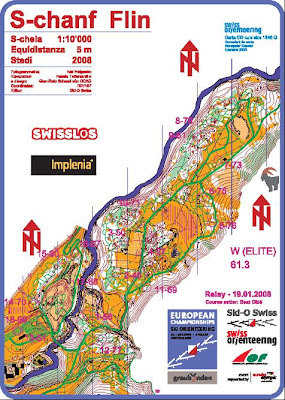 There is more interesting information, results, some photos, route gadget stuff, here.
Posted by Alex at 11:34 AM