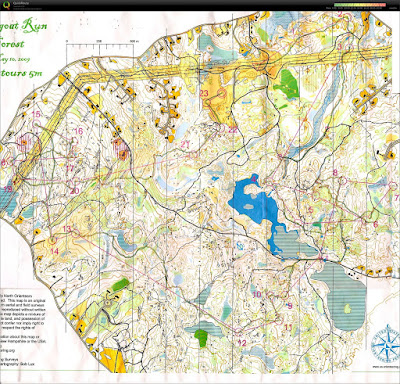 I had high hopes for this race, I really did. It is late enough in the spring that I'm actually in some semblance of shape, and I've been doing a ton of orienteering (for me), so I was thinking that I was all set up for a great run. Alas. A great run was not in the cards Sunday.

I started too fast, trying to keep up with Samantha and Hillary (Sam is on the US team this year and they were both on the US team last year), since you can follow people in this race. The first mistake was to try to figure out which control to skip while running with them, really I should have just folded up my map and blindly followed along, letting them navigate until I had my feet under me. The pace wasn't too bad, physically, but I couldn't seem to hold my place on the map while at the same time figuring out which control to skip, trying to look at the whole course at once. Lesson learned - I need to practice running faster in the woods and reading a map at the same time. Around control 3, I realized I wasn't having much fun, so I slowed down to a speed where I could see the map at the same time and life got much more enjoyable.

By control 5, Jeff Saeger had caught up to me, and I've followed him in past Billygoats, so I figured I'd go with that approach again. Somehow, I lost my place on the map leaving 5, and the woods were thick enough that you couldn't really see anything, so you just had to hope that your compass was pointing you in the right direction. I was still so flustered from having been clueless the first three controls, though, that was desperate to keep up with Jeff, since I knew if I lost him now that I'd never relocate. We finally started up a gradual hill, and I realized that I thought I knew where we were, except that Jeff wasn't going as far up the hill as I thought we needed to. My spidey sense was tingling, but I decided that it would be prudent to follow the more experienced orienteer. We missed the control, hitting the trail and relocating successfully. We had both decided to skip 7, so we headed off to 8, and I had used our lost time going to 6 to get myself back together so this time I knew that we were heading too far west. I didn't do anything about it, though, and let myself make another mistake following Jeff. He claims he was trying to get rid of me by getting lost, I'm not so sure I believe him. Anyway, I left him there to relocate on my own, and got the control.

I knew I was doing much worse than I'd hoped at this point, and so really pushed the pace on the long trail run to 9. I ran into a group of "old but accurate" guys at 11, and then drifted a bit to 12 trying to run away from them. It was a long leg to 13, but I hadn't read ahead at all, so I had to pause for a bit at 12 planning the route. I passed another group of old-but-accurates on my way, I could have just followed them but I had seen a group of girls behind me as I left 12 who I didn't think had skipped yet, and I wanted to put as much distance between us as possible. I did get to 13 alone, and then went too far up the ridge to 14 and two of the girls caught up. They hadn't skipped yet, and were skipping 15, otherwise I would have fallen into their group. Bummer.

I sort of weaved my way over to 15, feeling shaken for some reason but still really strong physically. Two of the old-but-accurates that I had passed going to 13 were ahead of me as I approached 16, along with a couple not-so-old and not-quite-so-accurate guys, who I was anxious to leave behind. 17 was a short leg, and then I went pretty fast to 18, but I ended up drifting more than I meant to. I was still ahead of the old-but-accurates, but a 2-minute mistake on 19 meant they caught back up. I just couldn't find the damn flag, until I heard voices and looked up the hill and saw a bunch of the old-but-accurates drinking water at the control. Doh! They were a big group, now, I think that they had merged with another group ahead of them, but there was no sign of the not-so-old and not-quite-so-accurate group, turns out they were behind us. I followed this group up to 20, although they were too far south on the ridge, all the while planning my evil genius route to 21 and how I would drop them for good.

I snagged 20, admired the view for a second (it was a pretty spectacular view), and headed downhill to 21. I wanted to be moving faster but the hillside was really steep and the woods were really thick, and I could rarely move faster than a slow jog. I crossed the road and then managed to completely bungle my genius plan, zigging and zagging and arriving at 21 after most of the group. Yargh! I caught back up to them at 22, working my way to the front of the group to 23, and only getting passed by one guy on the finish chute. What a frustrating way to spend a day... If I just could have run cleanly, it would have gone so much better, but I guess thats the story of all orienteering races. At least I finished in under 3.5 hours, the cut-off time, so got my teeshirt, but I almost (well, 10 minutes) got beaten by Sharon Crawford! No offense to Sharon, but I should be faster... I guess I was going faster, just not at all in a straight line. The girls who I had seen at 12 ended up about five minutes ahead of me.
Posted by Alex at 10:00 AM